Time to look back at some of the highlights of the year with five picks. It’s a chance to celebrate some great racing and to apply some precious hindsight.

The first pick is a recent one, the men’s world championships in Flanders.

Picking a recent race can be too easy, a short term recall like a pop song that’s still in your mind. However the 2021 edition of the worlds will last, an edition for the ages.

The setting helped, Flanders is a home of cycling. It might not be where you’d holiday with a bike, and in the weak sunshine the land looked as beige as it does in April, but no where else on the planet is cycling as a sport cherished as much. The crowds came out and the course was spread across two circuits which helped share the action too.

However it was the racing on the day that made everything so good. Whisper it but the Worlds tends to be a formulaic race, a very slow version of the musical chairs game where lap after lap the pace picks up until finally things get frantic towards the end. Just because it is live on TV doesn’t mean you need to set aside the day to to watch. A case in point would be the previous edition also won by Alaphilippe with one surgical strike on the final lap. 2021 was very different, Benoît Cosnefroy launched a big move with 178km to go and things stayed tense from then on. Even at the end Alaphilippe was only holding a slender lead, he struggled to take ten seconds.

Why the highlight?
Good sport for hours on end, wave after wave of attacks and an uncertain result until the end.

With hindsight
Long range moves are regular thing now. It’s said that since the resumption of racing, following the Covid lockdown hiatus of 2020, riders have been treating every race as if it could be their last. This surely doesn’t explain everything? We’ve had last races before, whether it was the end of the season, like Lombardia every year, or just the end of a particular campaign during the year, think Roubaix or Liège when riders were ending a long spring campaign It didn’t make them more interesting, nor make riders less risk-averse. Indeed because it was their last shot sometimes riders were defensive, exhibiting a fear of losing rather than a carefree go. Today you don’t need crosswinds to shred the field, riders seem more open to risky moves, to putting on a show. In part because Mathieu van der Poel and Wout van Aert are involved and these two are often instigators of moves like this. The Worlds took this “go early” attitude to a new level, when serious attacks went with 170km remaining it was something to behold. Paris-Roubaix the following week was similar, although the rain played its part as a big group just wanted the option to hit the pavé first and going clear was a way to achieve this. 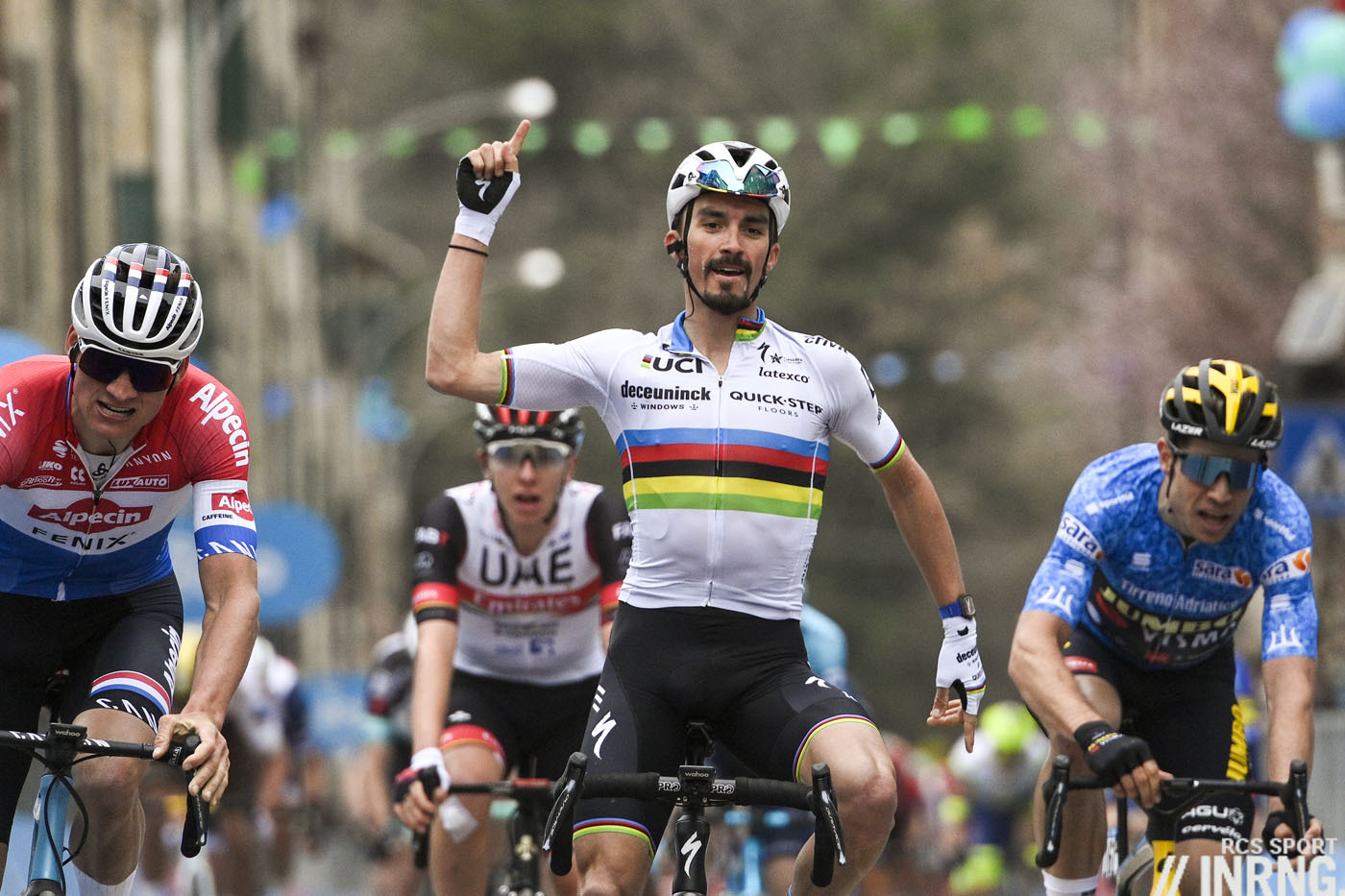 The Worlds was only Alaphilippe’s fourth win of the season. A rainbow curse? If so, many would sign up for the season he had. Yes he crashed in the postponed Flanders in 2020 and spent winter playing catch-up, then he was trying to win on all sorts of terrains. He’d got his name up in lights after a stage win Tirreno-Adriatico, a small revenge after Mathieu van der Poel had sacked him in the streets of Sienna to take the Strade Bianche, a sharp uphill finish was meant to be Alaphilippe’s speciality. Still he won the Flèche Wallonne, placed in Liège and crucially, won the opening stage of the Tour de France and collected the yellow jersey. Only for van der Poel to grab the yellow jersey off him the next day, of course. Alaphilippe’s not going to a win a bunch sprint like MvdP can, but the Frenchman has range that extends to the mountains. He came close to winning the Tour de Suisse, abandoning to attend the birth of his son after finishing second in the Andermatt time trial, using a road bike because he knew he was leaving and didn’t want to take too much time or limelight. Now he’s definitively decided to skip cobbled classics in 2022 he’s chosen the hillier races once again.

Among the others from the worlds we don’t the sharpest vision to look back at the troubles Remco Evenepoel found himself in. In part because others, largely in the Belgian media, look so closely. He’s a star, a celebrity and newspapers refer to him by his first name. “Remco did this”, “Remco said that” and so on, this is practically a life lived under surveillance. His long spell on the front of the lead group in the worlds did plenty to help keep the group away but it left the Belgian team lighter for the final two laps when they needed help to close gaps. But with hindsight, imagine the race over and over again it’s hard to see how the Belgians could have won it or what Evenepoel was supposed to do if he couldn’t go solo.

As for Mathieu van der Poel and Wout van Aert on that Sunday in Leuven, it wasn’t to be. This time they didn’t shape the race too much either. It’ll be interesting to see where they go next, both are on reduced cyclo-cross campaigns because they’re racing for a lot of the year already but we’ll see what this does to their punch and power on the road. But that’s where the hindsight ends and we start looking forward to 2022 and the likes of the Strade Bianche all over again… 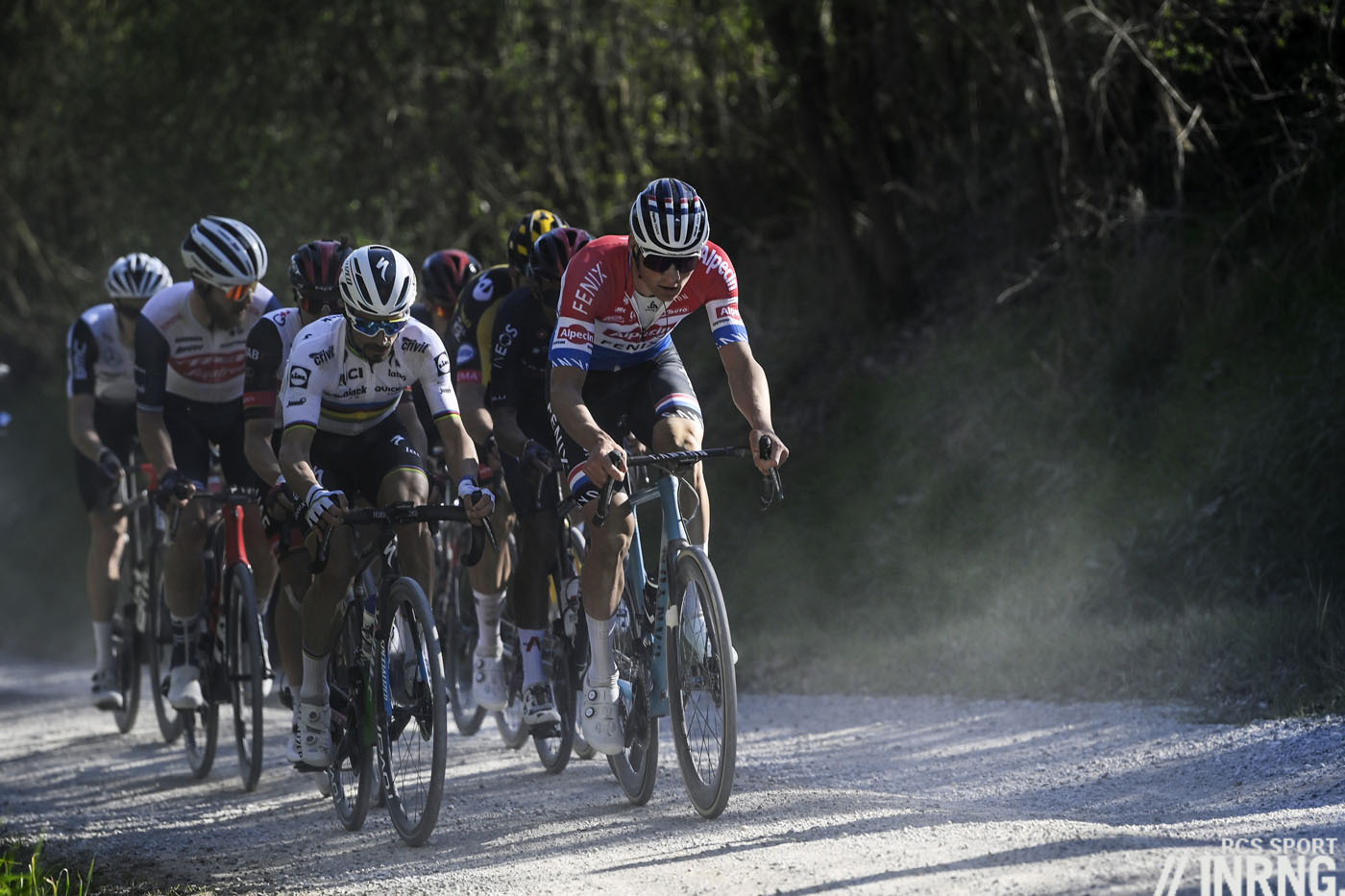