Roads to Ride: The Signal d’Uchon 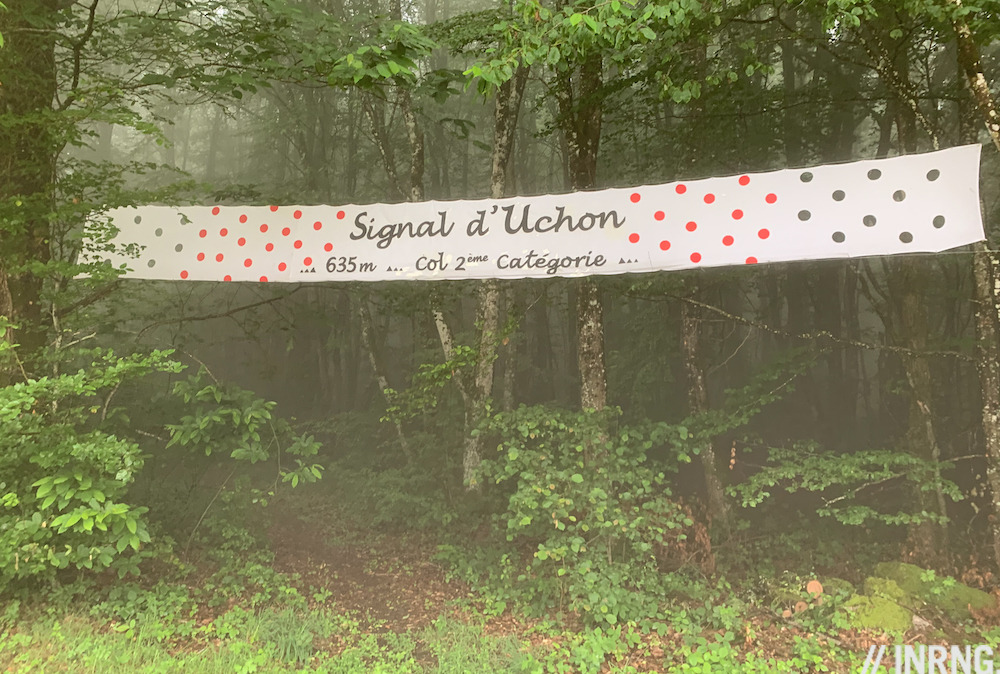 What’s the difference between a mountain and a hill? Geologists and cartographers might have their definitions and some say it’s just a question of semantics. Visit the Morvan, France’s smallest mountain range, and it does have that mountainous feel, there’s a sense of scale, severity and menace. When the Tour de France route was unveiled last year the Signal d’Uchon was one of the novelties presented and it will feature late on Stage 7. Let’s take a closer look…

The Road: starting from Mesvres in the Saône-et-Loire department of France, the D228 road heads south via La-Chapelle-Sous-Uchon to Uchon. It’s 7km with an average gradient of 4%. Follow the signs for Uchon. 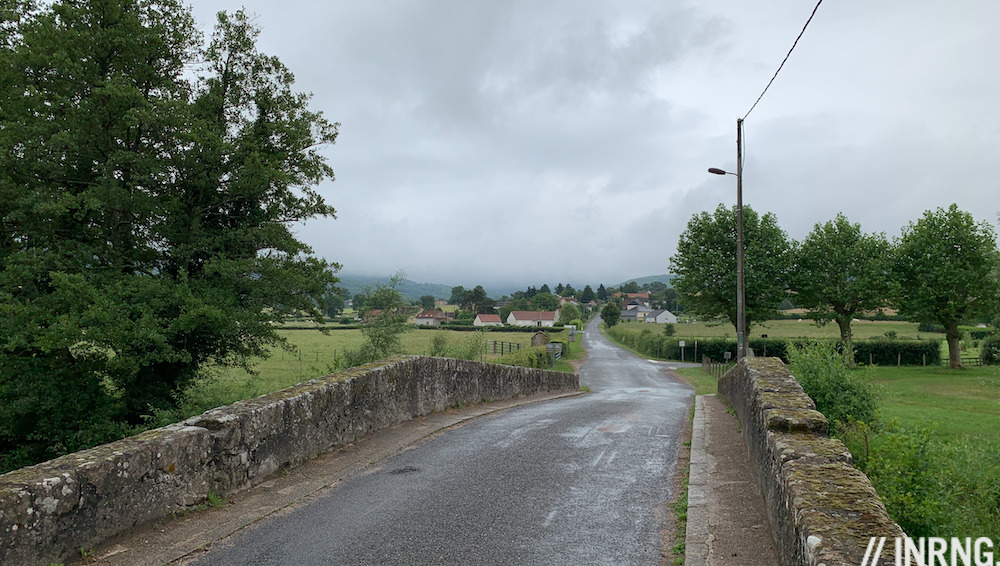 The Feel: Mesvres is a quiet town with a railway line and a small river, little clues that the road out has to rise but there’s little feel of a town in the mountains. It’s bovine paradise, charolais cattle huddle in green fields surrounded by hedgerows. There’s a little rise out of town but it’s chased by a descent, still no sign of what is to come despite the terrain looming above. 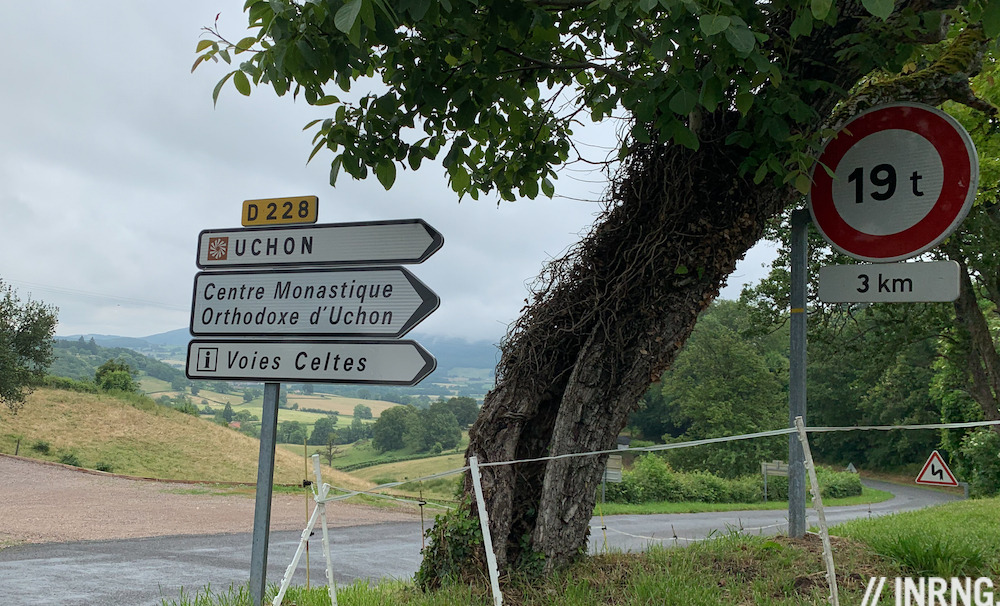 After two kilometres you reach some hairpin bends to lift you into the village of La Chapelle d’Uchon and this is where the climbing starts. There’s a turning before the village but don’t worry about missing the chapel as there are more to come. Here the road kicks up here with some 8-10% and a wide hairpin curls around a cemetery. You climb up through woodland and when you emerge and there’s a warning sign for an 18% descent. 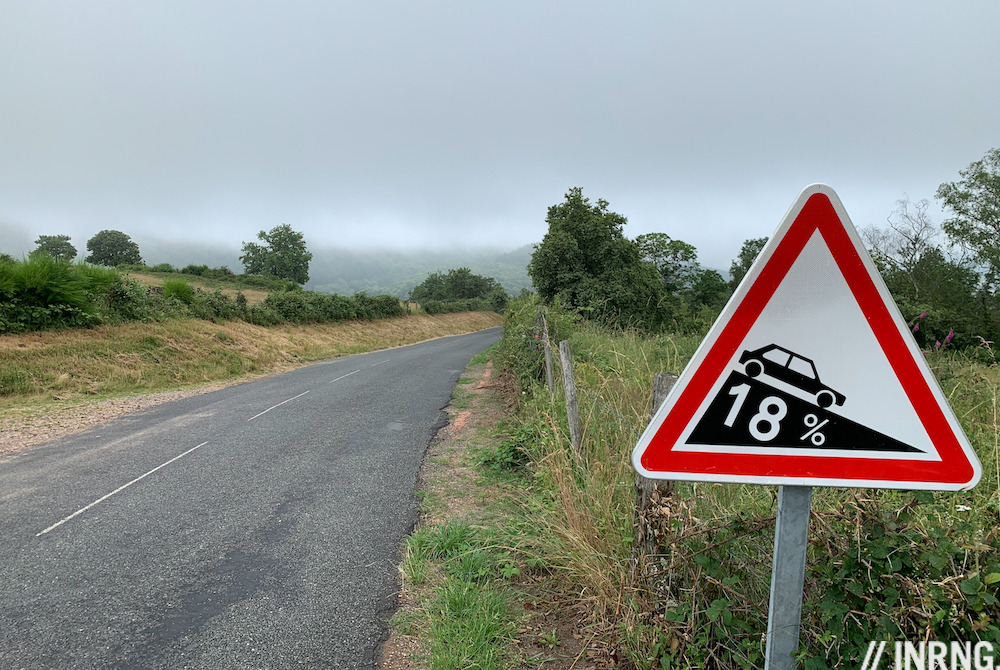 You brace for the gradient rather than relax on this descent and get tipped into the hamlet of La Gravetière where the road starts climbing again. It’s past a farm and into woodland and now the slope starts to bite. It’s 10-12% for a while and if it eases to 6% in places it never feels much easier, even a one metre stretch of the road is irregular, the tarmac has small undulations and you keep looking down to find the best path through.

From here it gets wild, roads in France were meant to be engineered and level by decree but someone gave up here, it’s 16%, 18%, 14%, 18% despite being cut into the rock. Granite boulders the size of cars are perched by the road as if an Obelix figure lifted them to the side. You round a bend to reach the village of Uchon, a small place with another chapel where aptly the words “endure and hope” are engraved inside. With a shrine by the road the Mur de Huy comes to mind only you’ve been climbing for kilometres already and there’s plenty more to come and like Huy if you take the wrong line through the inside you can find some 20-22% gradients. It’s a quiet road but a car overtakes, in first gear, the engine wheezing. Leave the village and the road keeps twisting, there’s no end in sight but if you round a bend and spot a phone box up ahead that’s your target, sprint as you are at the top. Just don’t expect to call home, it’s abandoned. 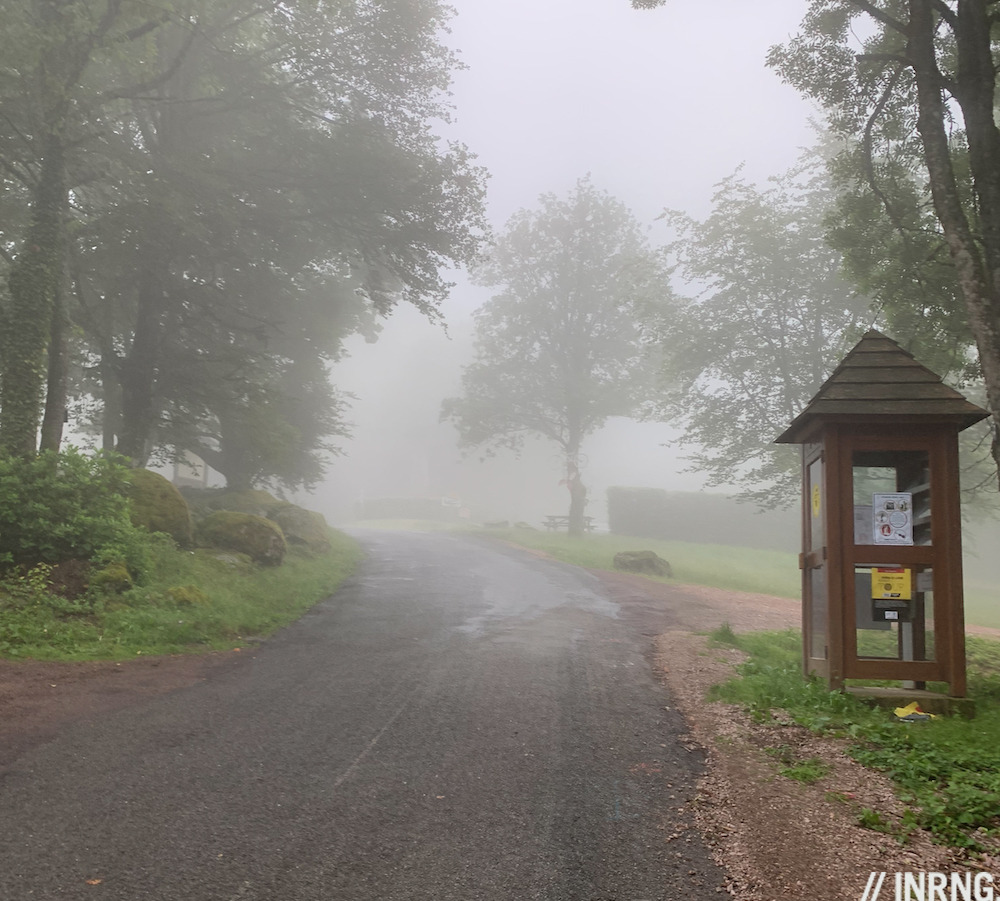 The Verdict: a climb in three parts, first the gentle road out of Mesvres, the steady climb out of La Chapelle before a sudden descent and then the nasty surprise of a steep 1.75km, a meaningless average of 11% because it’s 6% one moment then 20% the next.

It’s over quickly but you can see why the Tour has sought out the Morvan and this climb. If comparisons with famous climbs help, this is tougher than La Redoute in Liège-Bastogne-Liège, but easier than the Muro di Sormano as it’s not as steep for as long, nor preceded by a sustained climb just to get to the start.

Signal d’Uchon: Signal as in a hill where people could survey the landscape from afar and send signals whether by fire, lantern or semaphore, a strategic point from Roman times to the maquis resistance fighters in the second world war. Uchon is derived from the old Celtic world uxello meaning high or above.

Ride More: unless you’ve got notes to make for a stage preview you probably won’t come just for the Signal d’Uchon, this is hardly Mont Ventoux or Alpe d’Huez. But the area is great for riding, the Morvan offers hundreds of quiet roads in quintessentially rural France, the sort of place where you’ll meet a tractor, a yellow Poste van and little else. Certainly you’ll see more cows than people. Plus you can construct any ride you want from a 10km loop to a patisserie to a 200km chamois-peeler with 5,000m of vertical gain. The Signal d’Uchon is steep but the other climbs are all more gentle, think 5-6% for real this time.

More Morvan: this mountain range sits between the Loire and Sâone valleys, between Sancerre and Nuits St. Georges for wine drinkers. It’s a very old volcanic field with granite everywhere. The Haut Folin is the peak at 901m, modest compared to the nearby Alps or even the Jura but there’s a large network of rural roads, rather than busy valleys and a few passes and this is the most rewarding aspect. At times it feels like Brittany gone vertical with the granite everywhere including stone houses with slate rooves plus several Celtic themes.

Travel and Access: the Morvan is a national park but surrounded by autoroutes and TGV railway lines. Château-Chinon would make a good base for cycling but if you come for a family holiday then further east towards the Sâone offers more obvious tourist destinations like Dijon and Beaune. June to October is the best time to visit.