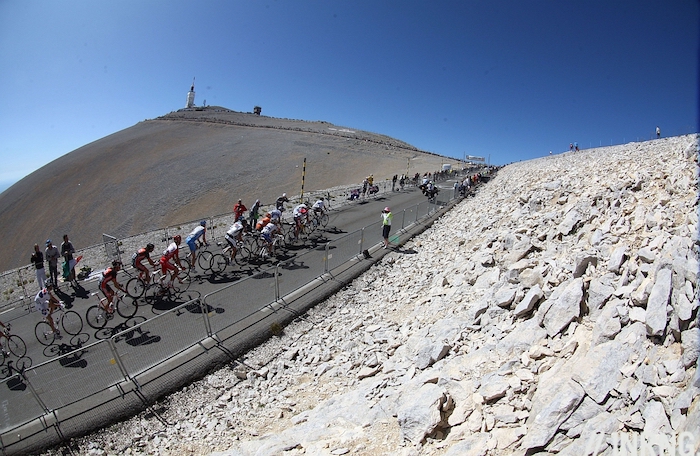 As part of a series exploring the famous roads of cycling, here is Mont Ventoux. The idea with this series is to discover the road and its place in the world, whether its part in cycling’s folklore or to explore what it is like on a normal day without a race.

Having covered Alpe d’Huez and the Ghisallo so far in this series, Mont Ventoux is different. It dominates the landscape and the road leads to nowhere except summit. Apart from the view there is little at the top, a sky-blue vacuum to be filled by the imagination.

A fixture in the Tour de France and other races this is another Mecca for cyclists who ride up “the giant of Provence” every summer.

The Route
There are three starting points to reach the top but classic ascension of Mont Ventoux starts from Bédoin. This is 22.7km long and averages 7.1%. On paper alone this is a challenge but as the profile shows, a gentle start means double-digit gradients await. The summit stands at 1,909-1,912 metres depending on which sign you read. 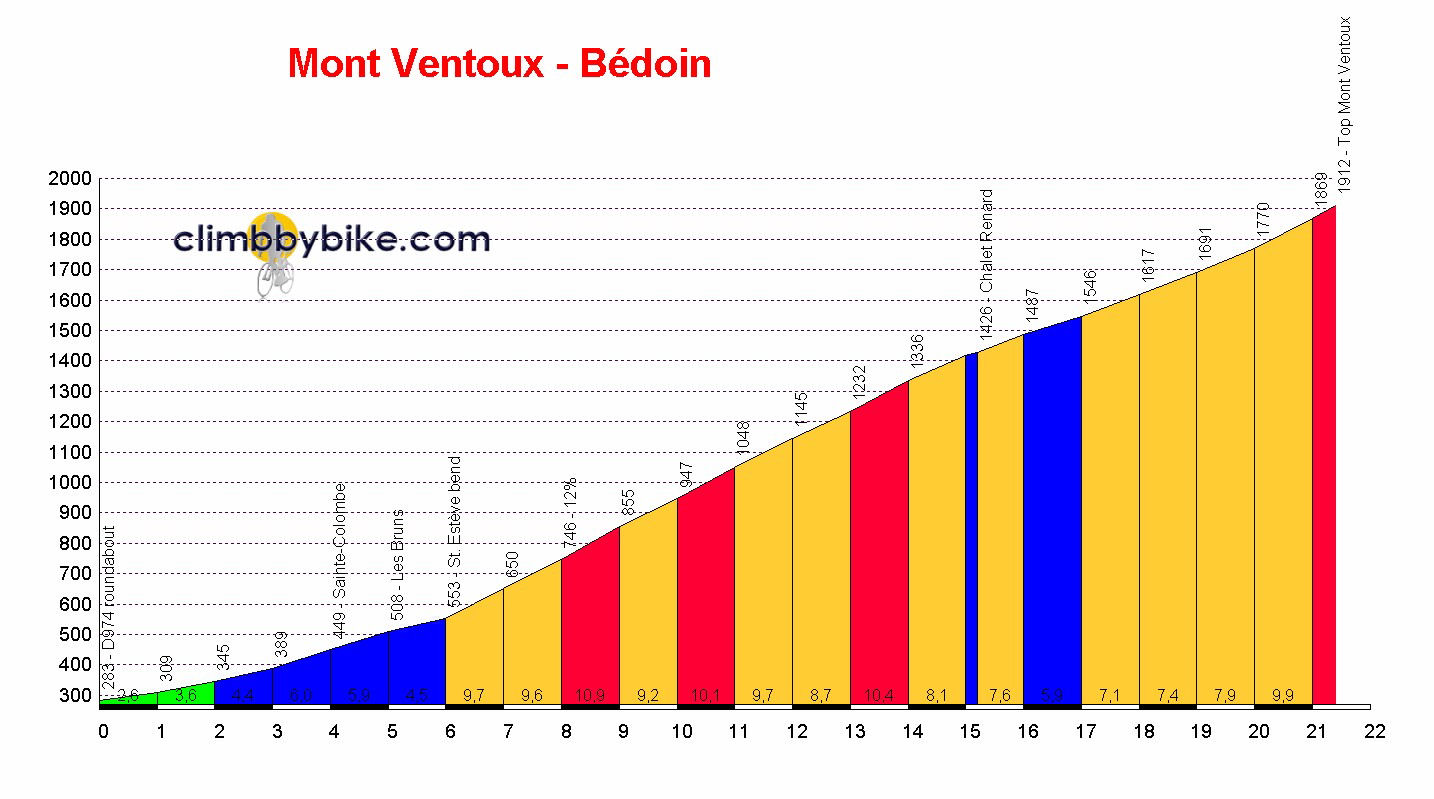 The D974 heads east out town and slowly begins to rise. The first part of the climb is more an approach to the mountain. But it gains in altitude as you pass the peach orchards and vineyards. After 8km it is at the village of Saint Estève that the tone shifts. A hairpin bend and from here on the road climbs at a steep 9-10% through oak and pine woodland. The slope is irregular, consistently steep to constantly load the pedals but just enough variation to toy with momentum. It lasts for 10km until Chalet Reynard where the road briefly takes on an Alpine look with the ski lift and car park and the rider should follow the road round to the left. Then begins the most famous part as the vegetation gives way to calcified white rock, only broken by the strip of black tarmac that twists up towards the teasing summit for six kilometres.

The Feel
The mountain eludes photography. Shot from afar Mont Ventoux appears tame, a mere ridge; get close and you can’t get the perspective needed to see the enormity of the mountain. Only shots taken by flight seem to capture the scale. Here’s one courtesy of Allen Foster, aka @NoMapNoCompass: 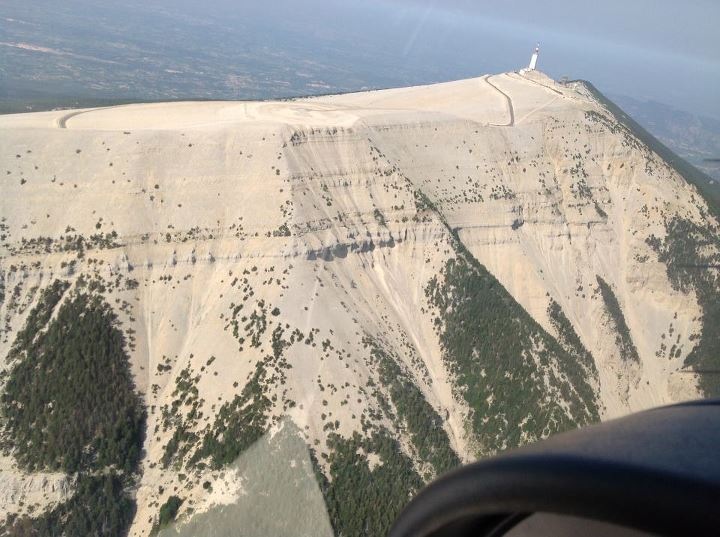 Ventoux as seen from an aircraft window

Instead of clicking a camera, clip your shoes in. The start is enough to make you wonder what all the fuss is about. Bédoin is a relaxed town that thrives on tourism and agriculture. The gentle start past vineyards and orchards is civil and gives no indication of what’s coming.

This all changes in the tiny village of Saint Estève, patron saint of low gearing. The road enters the shade of the forest and on a warm day the air has a pine scent. From here on the road becomes a test. For the unprepared the 10% slopes become a series of leg-presses: 50 reps a minute for the next hour. For those in better condition or just equipped with low gearing it becomes a winch-like effort. Any race quickly blows apart, the peloton loses its military unity and quickly resembles a troop of sheep scattered on the slopes. There’s very little benefit from drafting other riders, this soon turns into a private contest between power and weight. If you’re comfortable enough to be able to look around you’ll catch glimpses of the summit through the woodland, a monster lurking behind the trees. Unlike many climbs this one has almost no hairpin bends.

Chalet Reynard offers a flat respite, and a fountain for those without a following car. Then it’s on to the exposed section. The experience will depend on the day. With luck you will have deep blue skies, mild weather and a chance to profit from the stunning views below you, especially when summer brings violet fields of lavender. But it’s often windy and the higher you go the worse the crosswinds. The wind is measured at over 90km/h for two thirds of the year and you can find yourself leaning at an angle to counter the wind, especially for the last few hundred metres which are steep and where it feels you’ve entered the jetstream. When viewed from afar the white rock looks as pure as snow but when riding close you’ll see vegetation clinging on.

The final ramps are steep and after the hairpin bend the road flattens in front of the observatory building. The view from the top is impressive, not 360°, but enough. Riders now have a dilemma, to descent back to Bédoin or to go behind the summit and descend to Malaucène.

History
Mont Ventoux is older than the Alps. The white summit is the result of geology and limestone, it’s not snow. It was surely on Roman maps but the first writings come from the fourteenth century when the Tuscan Francesco Petrarca described his ascent. Labelled the “father of humanism”, Petrarch, as he is known in English, is often cited as the world’s first mountaineer, a man who climbed Mont Ventoux just because it was there. Whether he did or didn’t is now disputed, some say his tale of ascent is allegorical. In 1783 Amélie de Sade made several expeditions to the top for the fun of it. Sadism indeed.

In the middle ages the mountain had seen prodigious production of charcoal. So many trees were felled that the mountain became bald and an early conservation movement began to protect the environment. But it was not until the 1850s that serious efforts to replant the mountain began. But this was a success, the wind helped to sow the seeds.

The first cyclist to ride up was Adrien Benoît, at least the first to be recorded:

“The ascension of Mont Ventoux requires seven hours by car, six hours by foot and three and a half for a trained cyclist. The vertiginous descent, freewheeled, on the stoney slopes at 12% is a dangerous acrobacy. I burnt two brakes and a pair of wooden rims. Amateurs beware.“ 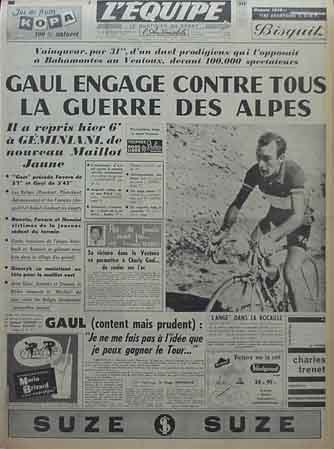 There have been buildings at the top for hundreds of years. The rectangular concrete weather observatory was built in 1968 and capped with a large TV antenna. From afar it resembles a giant syringe.

Race History
This is a famous climb of the Tour de France but it is used sparingly. It was first climbed in 1951 and has been used eight times as a summit finish and crossed six more times. It has been used in the Dauphiné and the Tour de l’Avenir amongst other races.

Height of Clichés
The summit might appear barren but it is littered with clichés. We can expect them to shine as bright as the white rocks when the Tour de Franc approaches. “Lunar landscape” is surely the confection of those who have never ridden up because there’s nothing lunar about the pull of gravity for those who pedal.

French post-structural philosopher Roland Barthes wrote about the mountain and the Tour de France in his 1957 book Mythologies, saying Ventoux is a “god of evil to which sacrifices must be made” and often no report is complete without some wild quote from him. Only I find a lot of his writing impossible, as if it was written at times by the Pomo Generator (be sure to read the footnotes if you go there). It’s as if we import Barthes because we struggle to understand the mountain.

Sadly Barthes’ mention of sacrifice brings us to Tom Simpson and his death in 1967 where exhaustion, alcohol and amphetamines combined to kill him. He collapsed and could not be revived on the scene, nor after a helicopter transfer to hospital. A cliché yes but a mention is obligatory and worthwhile. Apparently he died a little lower down that the spot where the memorial is placed but it’s more romantic to imagine him near to the top, so close. What if he’d died much lower down, would the memorial be so famous if it was hidden amongst the trees?

On a normal day
The summit dominates the landscape, ominous as a volcano. There’s little point in going to the top unless you’ve got the Petrarch or De Sade vibe. Locals have no need to cross over, they drive around. Despite the Ventoux AOC and Côtes du Ventoux wine label, there’s little agriculture on the slopes, the vines grow around the mountain rather than on it. The slopes are used for bee-keeping and truffle hunting. In the autumn wild boar are hunted. Otherwise it’s so quiet you can bury a body: the police have conducted excavations several times. Some claim wolves roam too.

Come summer and things pick up. Tourists picnic in the woodland. Cyclists winch up slow and descend fast. Benoît’s burning brakes are still relevant, apply the brakes for a 20km descent and rims heat and tubes burst. Meanwhile the mountain air is scented by burning clutch plates and brake pads, Dutch motorists and German motorcyclists are regulars. The road can be closed for car rallies – check before you go – and it’s long been place for motorsports too.

But no day is ever normal. Unlike Alpe d’Huez or the Ghisallo there’s no bus service, no vans, no children being ferried to school. It is a real effort to get to the top and it can’t be done all year round. The road can be blocked by snow but the wind is the main obstacle. Local cyclists will avoid the climb and seek out the many alternatives in the region. See Youtube for an example of the wind, after 1m40s the rider in black get taken across the road as the wind roars like a jet engine across the top.

It’s often said Ventoux gets its name from “venteux” or windy. But now experts say the name is derived from Vin-tur meaning a mountain that can be seen from afar.

Access
The Rhone valley has Avignon and Orange, both stops on the high speed TGV line between Paris and Marseille. Carpentras is said to be a gateway to Mont Ventoux but it’s never looked too elegant so slam that option shut. Instead Bédoin and Malaucène offer plenty of places and also bike hire.

But my base camp pick would be Sault. It sits to the east of Mont Ventoux and is further away from the Rhone valley and its howling Mistral wind that blows most days of the year. From here riders can take the “easy” third route up Mont Ventoux but also ride over to Bedoin to tackle the climb. Above all there are many other routes available from here when you don’t want to include the hors catégorie Ventoux. Indeed the best thing about the Ventoux is the region and you can ride for hours on stunning roads with the summit as a landmark to guide your sense of direction.

It will again be a place of pilgrimage when the Tour hits the slopes in 2013 at the end of the longest stage of the race and it will be a key test ahead of the Alps.