Roger Hassenforder has died aged 90. A Tour de France stage winner, a yellow jersey wearer, a hunter, a clown, a restaurateur… he was above all a big personality and one of cycling’s first television superstars.

Born in 1930, he grew up in Sausheim, a village on the edge of the city of Mulhouse in France that’s close to the Rhine, the German border. He seemed to enjoy risk and an audience from an early age. At the age of seven he asked to go to work with his father who agreed, only instead of letting him ride on his motorbike, strapped him into a trailer where he’d tow paint and supplies for his job daubing markings on roads. At some point on a descent the trailer broke free and overtook the motorbike to his father’s terror yet Roger wasn’t scared and wanted to stand up and wave at his father, only this tipped the trailer over. Fortunately he was ok and so began a childhood of lucky escapes and survivorship bias. At school – when he didn’t skip class to go hunting and fishing – he played the clown, even setting desks on fire after filling the ink wells with gasoline.

Hassenforder’s native Alsace region has swapped back and forth between France and Germany which explains why his French town was called Sausheim and why he was French but grew up speaking German. History wasn’t for the books, it was a game. As a teenager he would steal pistols, detonators and binoculars from Nazi soldiers to the point where he built up what he called “a real arsenal” which he stashed in a tomb of the village cemetery. Mulhouse was liberated in 1944 and the retreating Nazis placed landmines in the countryside. Hassenforder and friends would have fun digging them out and deactivating them, until someone lost a leg. Hassenforder found a pistol and rammed a bullet backwards down the barrel into the chamber but each time he aimed at a tree, a bird or even his terrified mother and sister and pulled the trigger nothing happened. Until one day when he had the gun in his pocket and shot himself in the hand and ended up spending a month in a German hospital before escaping home. With the war over, Hassenforder, seemingly still undeterred by risk, stockpiled unused munitions in an abandoned military shelter so he could blow it up for fun. He’d even visit daily to spray the walls with gasoline to make everything more incendiary. The plan was to light the fuse, jump on his sister’s bike, and escape to watch the fireworks. He only managed the first two steps of the plan and was found 20 metres away from the bike with only his shoes on and needed six months’ convalescence in hospital.

He joined his father to work as a decorator, but cycled to work to arrive faster than his father who’d go by car, a first sign that he was quick on a bike. His first race was accidental, in 1947 he’d gone into Mulhouse with some friends and they came across a bike race around the large 14 July townsquare. The 17 year old Hassenforder started heckling the first category racers, calling them lazy. The organiser called his bluff, gave him a racing bike and told him to have a go. He crashed on a corner, but he got up and tried again and set the best time leaving the organiser staring at his stopwatch. He did another lap and improved his time to prove he was that good. “I had a gift” he said and quickly rose up the ranks to become one of the best amateurs in France. Military service in 1950 forced him to learn French but he retained a strong German accent.

His gift was obvious to others. Hassenforder had class on the bike, a quality that can be analysed and described but is better mystified as something you can see rather than explain. His entry into the pro ranks with the Mercier Hutchinson team was an immediate success as he won a stage of the Critérium du Dauphiné Libéré and this in turn got him picked for the Tour de France where he’d enjoy four days in the yellow jersey, all while aged 22. Tour director Félix Lévitan lamented that Hassenforder talked as much as he pedalled but admitted he was “pure class” to take the yellow jersey in his first tour. L’Equipe’s Pierre Chany described him as part Louison Bobet (the best French rider of the time) and part Fernand Raynaud (the best French comedian of the time).

Hassenforder enjoyed a successful cycling career with the emphasis on enjoyment. He didn’t see cycling as a something useful or practical, when training in Alsace he said he opted to avoid all the nearby mountain passes rather than exploit them. The child who rustled pistols and stockpiled explosives found excitement and showmanship in racing. He’d ride to the front of the of the bunch and announce his attacks, literally shouting aloud that he was about to attack and everyone should hold on tight. As an 80kg rouleur he could do this but his speciality was sprinting out of a group where his speed, finishing skills and taste for risk made him hard to beat. Wearing the yellow jersey transformed him, “one day you’re a little rider, the next a god”. Winning was a means to an end, especially prize money. He could spend a day’s prime in one evening to the point where one of his nicknames was the “nightclub world champion” and accounts say he was engaged to be married 11 times, although he claims it was only four.

Hassenforder had some good wins but was no Louison Bobet but immodestly declared “I’ve got a Bobet in each leg“. As the Tour was being televised Hassenforder was an early star for the cameras thanks to a ready turn of phrase and his personality made “Hassen le magnifique” popular in France, way beyond his palmarès could. His antics weren’t just in private, he joined a circus troupe to play a clown one winter. Not just any circus but Le Medrano, a famed outfit in France that had been painted by Toulouse-Lautrec and once briefly included Buster Keaton and now Hassenforder.

The 1956 Tour de France was a unique edition, synonymous today with Roger Walkowiak’s supposed “easy” win. Hassenforder played his part in Walko’s success before the race had started. The Tour had only national and regional teams and Hassenforder was not picked for the French team, nor the North-East/Centre team because the manager Sauveur Ducazeaux could not stand Hassenforder’s capers, and besides Hassenforder had yet to finish the race. After some arm-twisting Ducazeaux, annoyed with Walkowiak too, relented and filled the space with Walkowiak and the rest is history. Meanwhile Hassenforder, from France’s eastern border, somehow found a space with the West team when a young Albert Bouvet got a knee injury at the last minute. The West manager Léon Le Calvez told Hassenforder “I’d pick you if you were more serious” so Hassenforder promised to finish the race. He also joked about a Breton grandmother but that was probably a ruse to placate the press. Either way he started and finished. He did better than that, taking four stages including a 187km six hour solo breakaway to win in Montluçon. 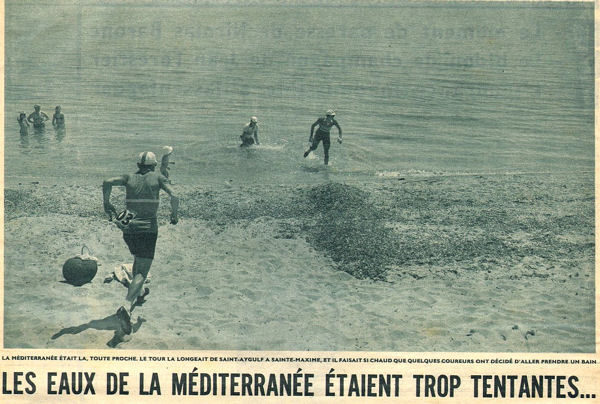 In the 1957 Tour Hassenforder took two stages… and the front cover of Paris-Match after diving into the sea at Saint-Raphaël with several other cyclists. It was a hot day and he was in the breakaway several minutes up the road. The dip in sea was refreshing for him but more so for the media, a publicity coup that broke out from the sports pages although he was almost disqualified for it. Later that year he got a six month suspension for slandering Jacques Anquetil, that big mouth sometimes went too far although he remained friends with Anquetil.

Hassenforder said his great regret was not to be a rider today because “[if I’d have retired today] I’d would have balls of gold“. For all the fame though he finished his cycling career almost penniless as this was the 1950s and even the stars earned meagre salaries and appearance fees could be burned up after buying a sports car and a suit or three. So he had to borrow the money from his parents to buy a restaurant. But it was an instant success because it wasn’t a restaurant, it was Hassenforder’s restaurant and his popularity attracted a clientèle. Hassenforder remained a local celebrity and became a keen hunter, blasting local wildlife whenever he could – “I killed 1,687 wild boar” he boasted – and collecting African game as trophies on holiday, but slipped away from star status, emerging now and then when the Tour de France came to Alsace. In 1999 he passed on the restaurant to family members. He kept up the jokes, as an octogenarian he enjoyed tying a €500 banknote to fishing line so when passers-by bent down to collect the money he could whip it away and laugh. In 2015 the nightclub world champion told his local newspaper “I’m the siesta world champion now”, adding “I’m happy to still be here”.