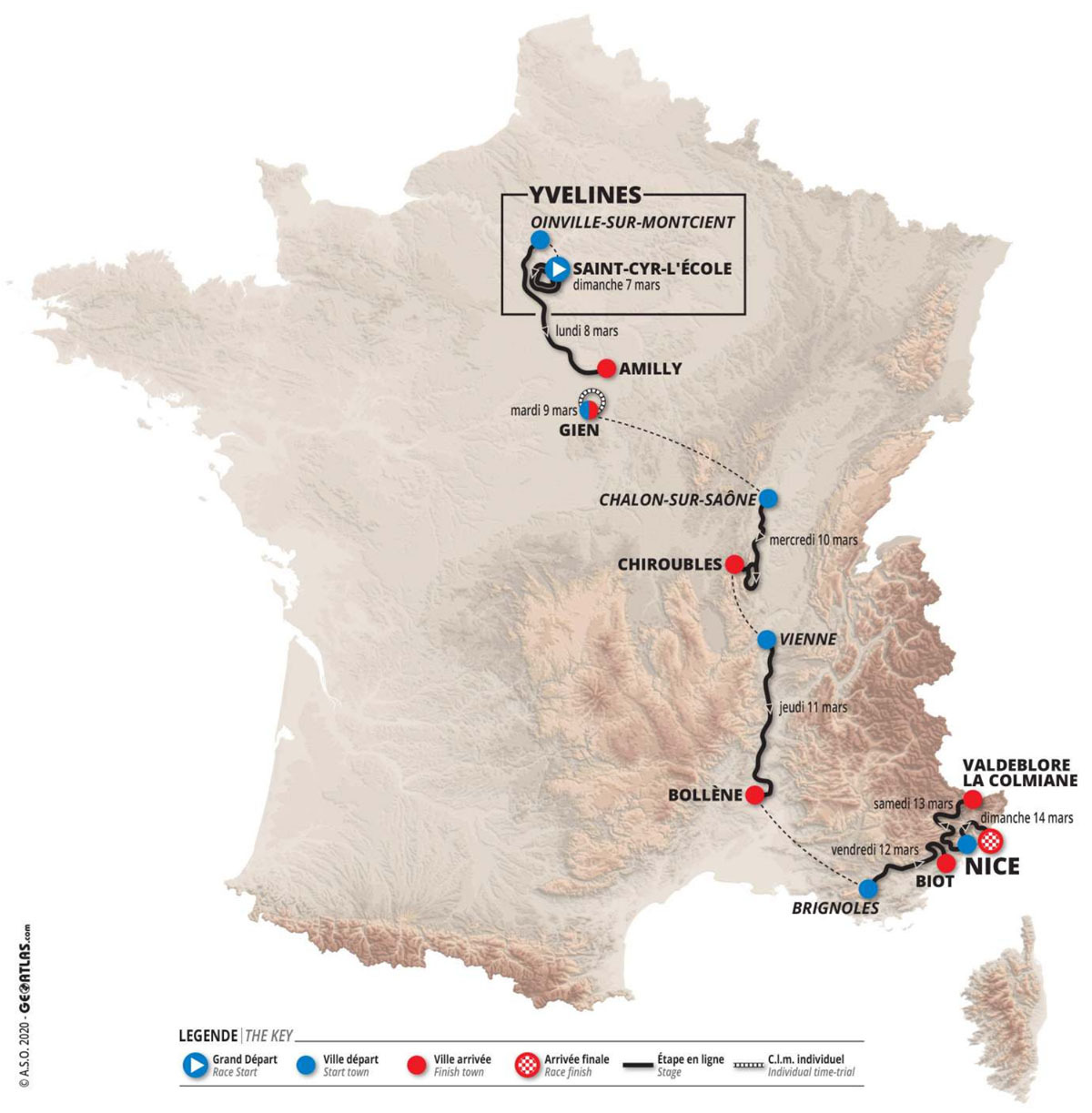 The route for Paris-Nice is out. Unsurprisingly it goes from Paris to Nice but like a sandwich it’s what’s in-between that counts. Here’s a closer look at the fillings… 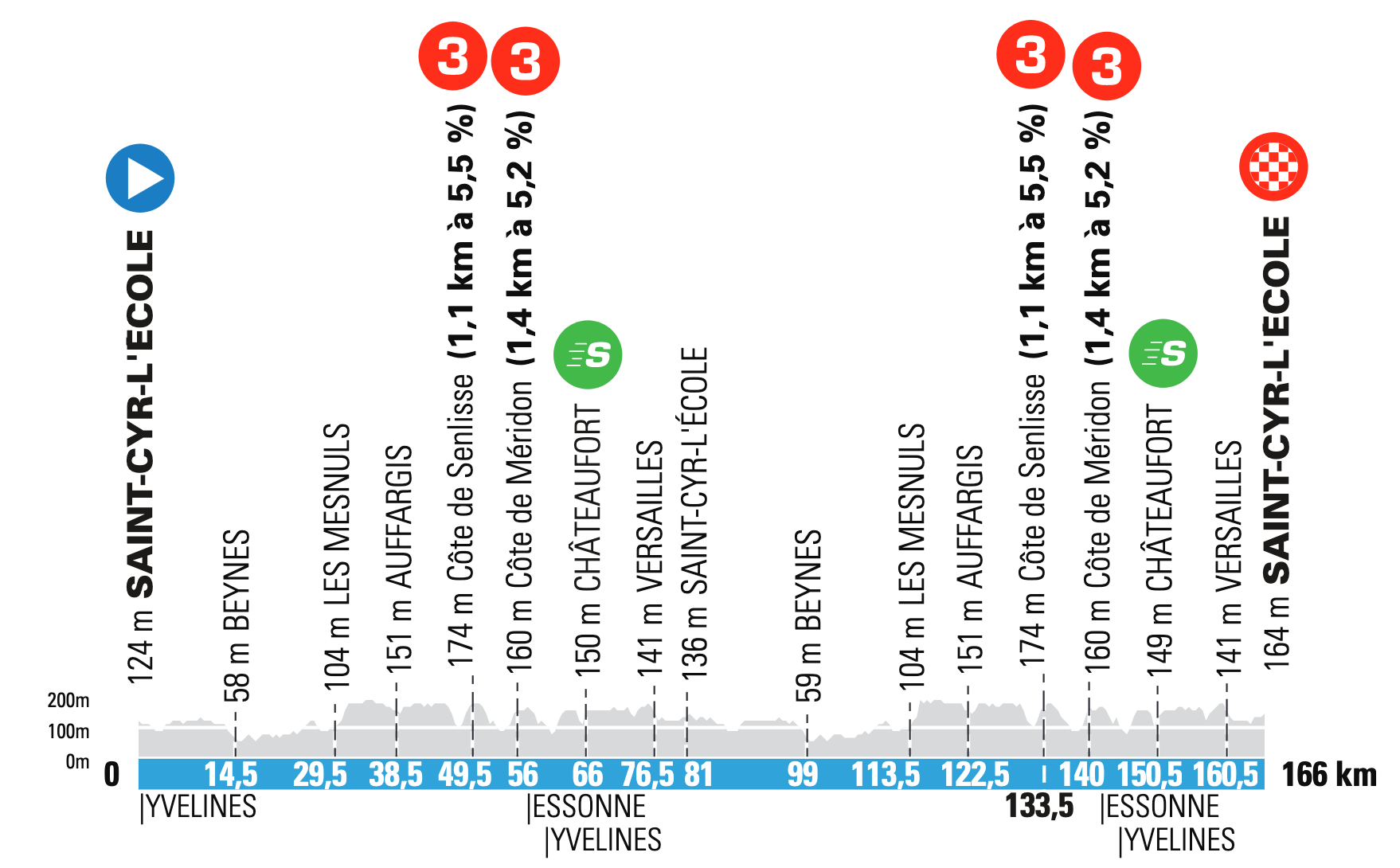 The race opens on Sunday 7 March with  to the west of the capital, ASO has a long-running deal with the Yveslines départment and and it’s the turn of Saint-Cyr-L’École, a town once famous for its military academy. The 166km loop has some climbing and narrow roads and looks typical of the openers we’ve seen in recent years, an Arnaud Démare day. 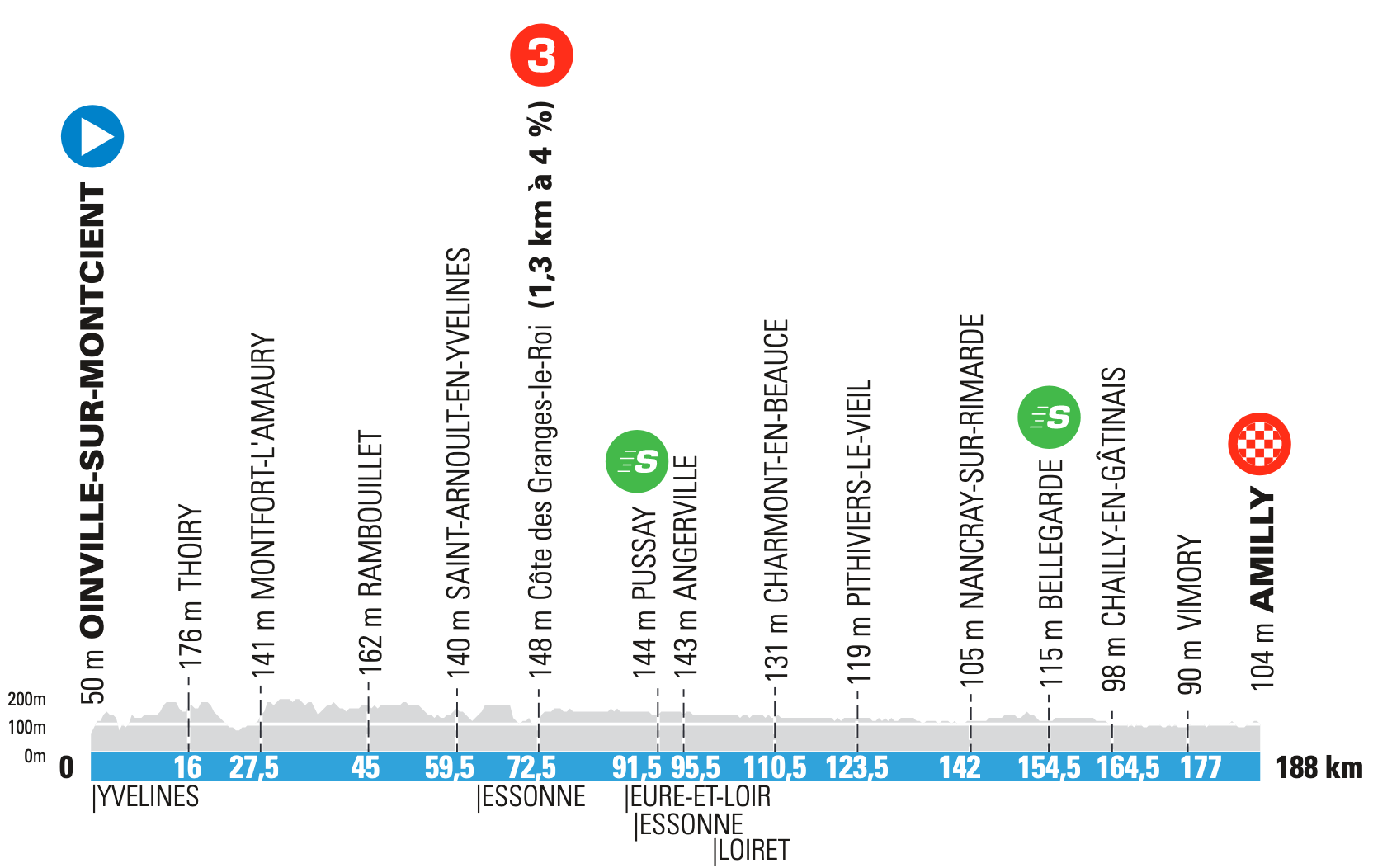 Stage 2 is the “just add wind” day because if the weather obliges we’ll have a peloton en julienne. If not then it’s a long ride for a bunch sprint in Amilly, last visited in 2017 on a bone-chilling day when Sonny Colbrelli won the stage. 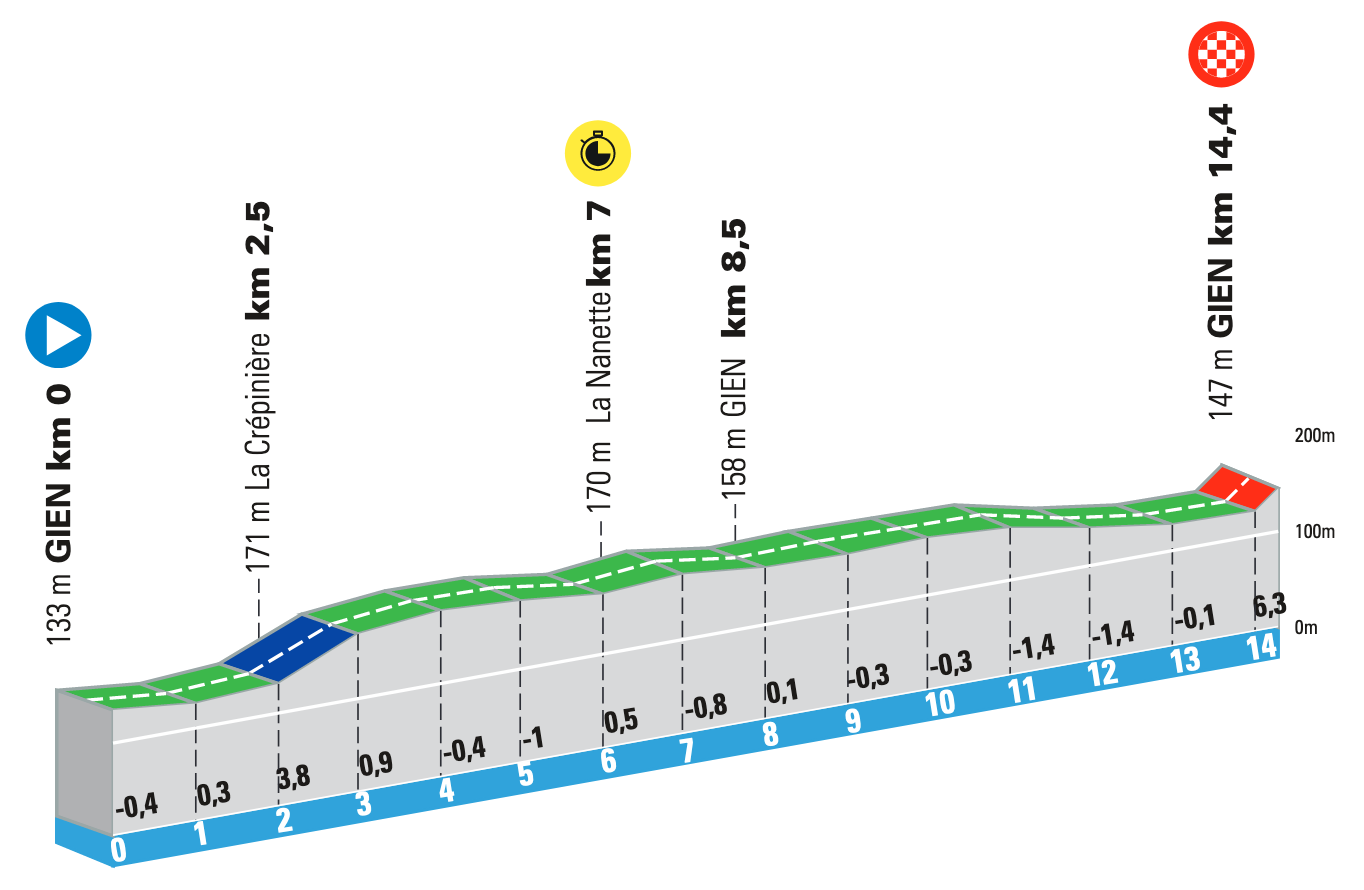 Stage 3 is around Gien, a town on the banks of the river Loire and home to Pierre Rolland only he won’t have a chance to attack here as it’s a 14km time trial. That little blue bump on the profile above is a steep road with 350m at 11%, enough to disrupt the rhythm and influence equipment choices. 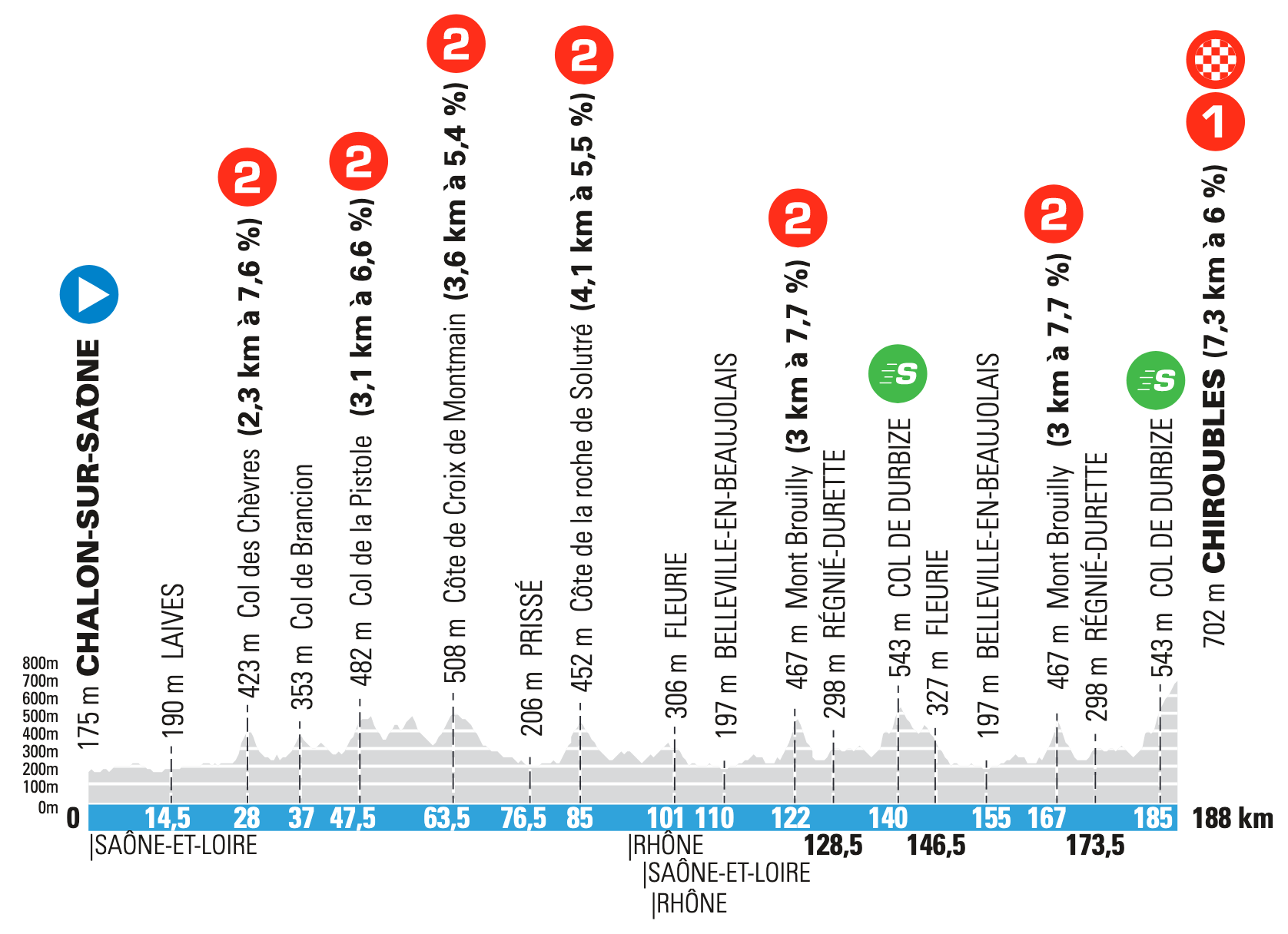 Stage 4 isn’t a mountain stage but there’s no shortage of climbing as it rides through the Beaujolais area passing many celebrated vineyards. The organisers report 3,500m of vertical gain but it could be closer to 3,000m. That’s plenty especially as it’s backloaded. Mont Brouilly is back, it’s been used several times in the last decade now (including 2016 when it was on the route but snowed off) and the 3km at 7.7% doesn’t do it justice, it’s more like a staircase with steep sections chased by flat moments and this time it’ll be used twice on a finishing circuit before an uphill finish in the vineyards above Chiroubles passing the Col de Durbize to head towards the Col du Fut d’Avenas with a finish, according to the regional press, by the Terasse du Beaujolais viewpoint. 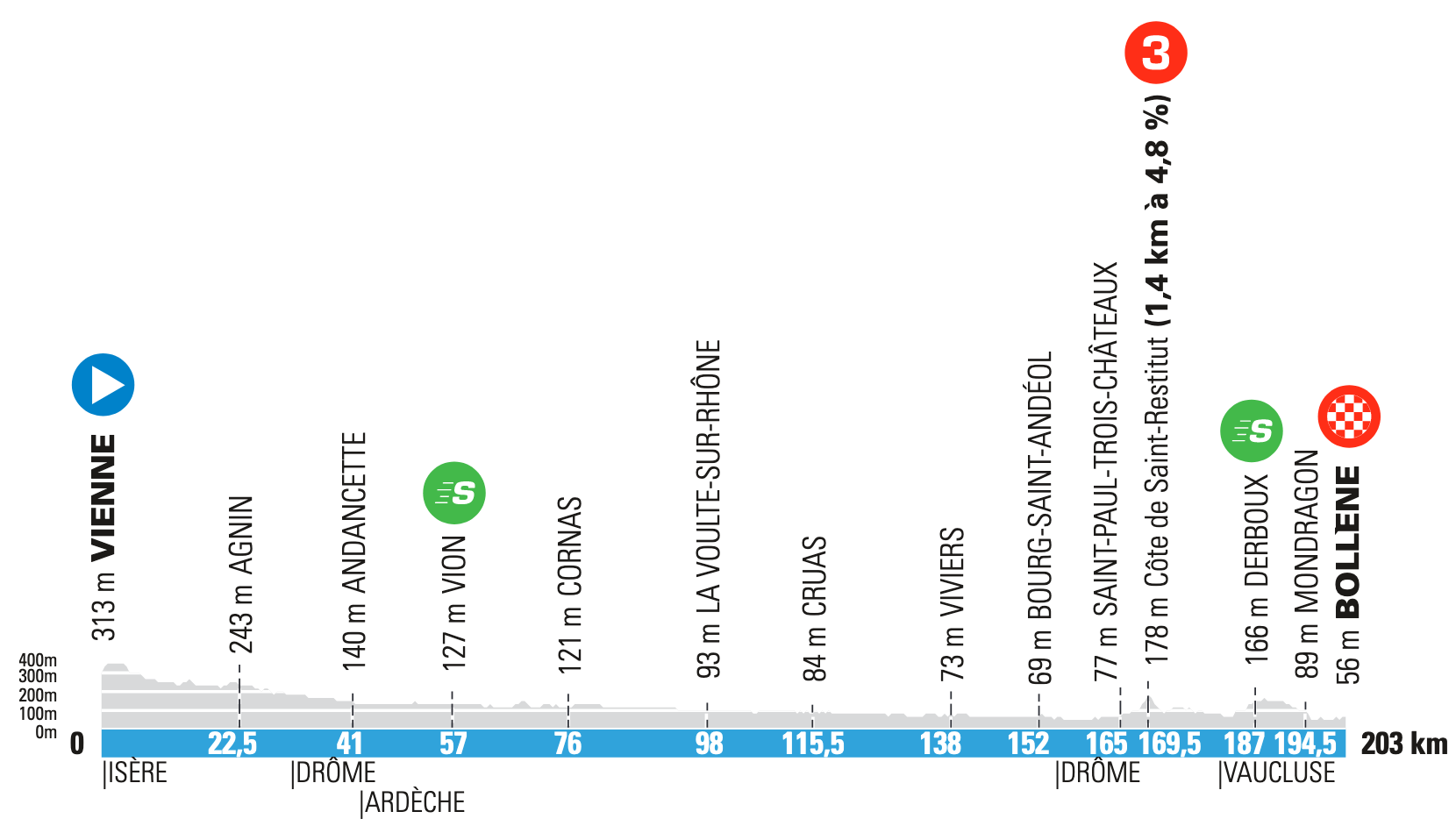 Stage 5 is the longest in terms of distance but the following day should take longer in time. It’s straight down the Rhone valley but loop in the Vaucluse vineyards before finish in Bollène, it’s a day for the sprinters but with a twist at the end especially if the local Mistral wind blows. 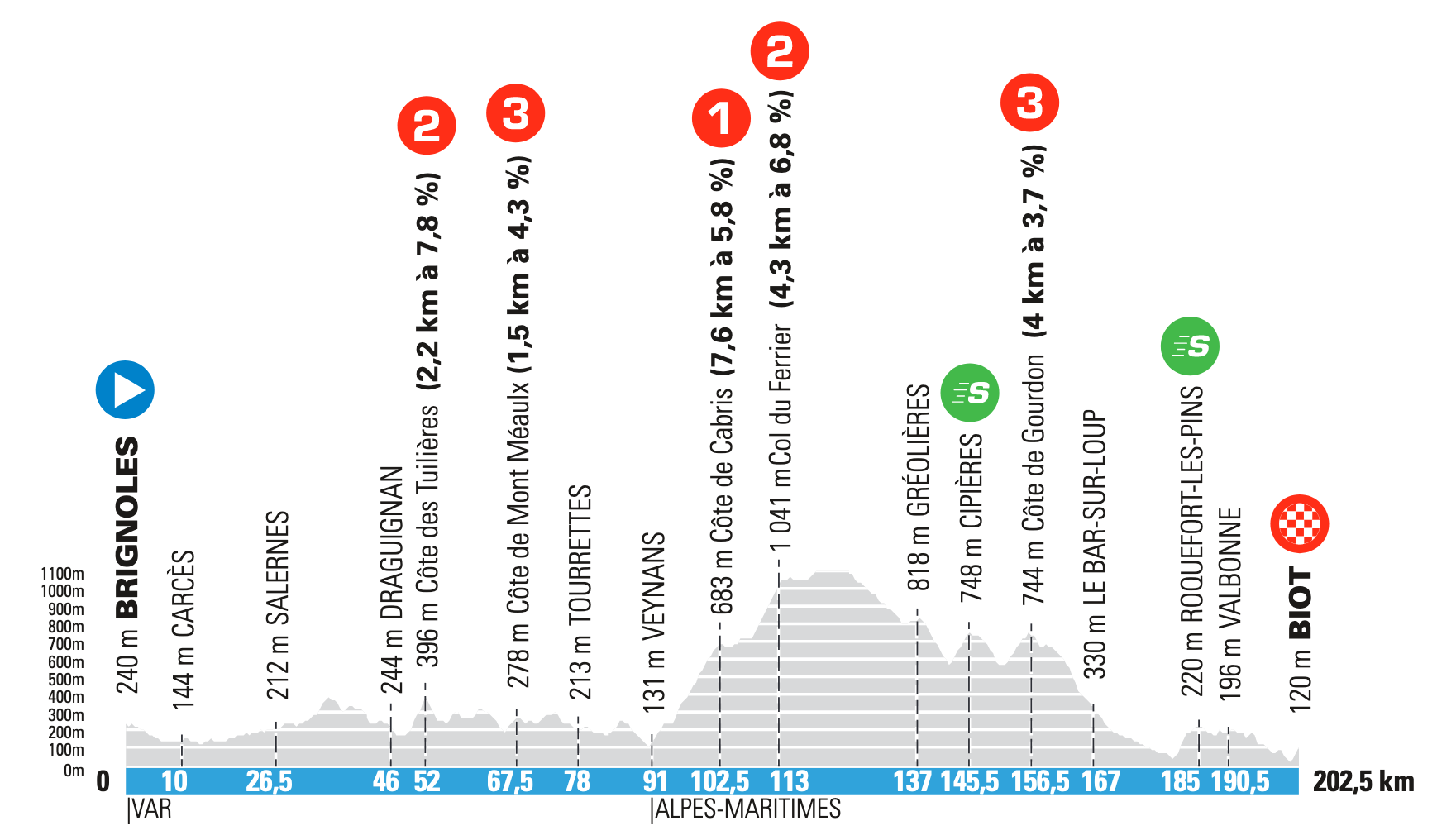 Stage 6 and the race almost arrives in Nice with some familiar climbs before a finish in Biot on a hilly circuit last used in 2011. It’s a hard day and a good chance for the breakaway to suit a punchy rider for the uphill finish in Biot by the Sophia-Antipolis business park. 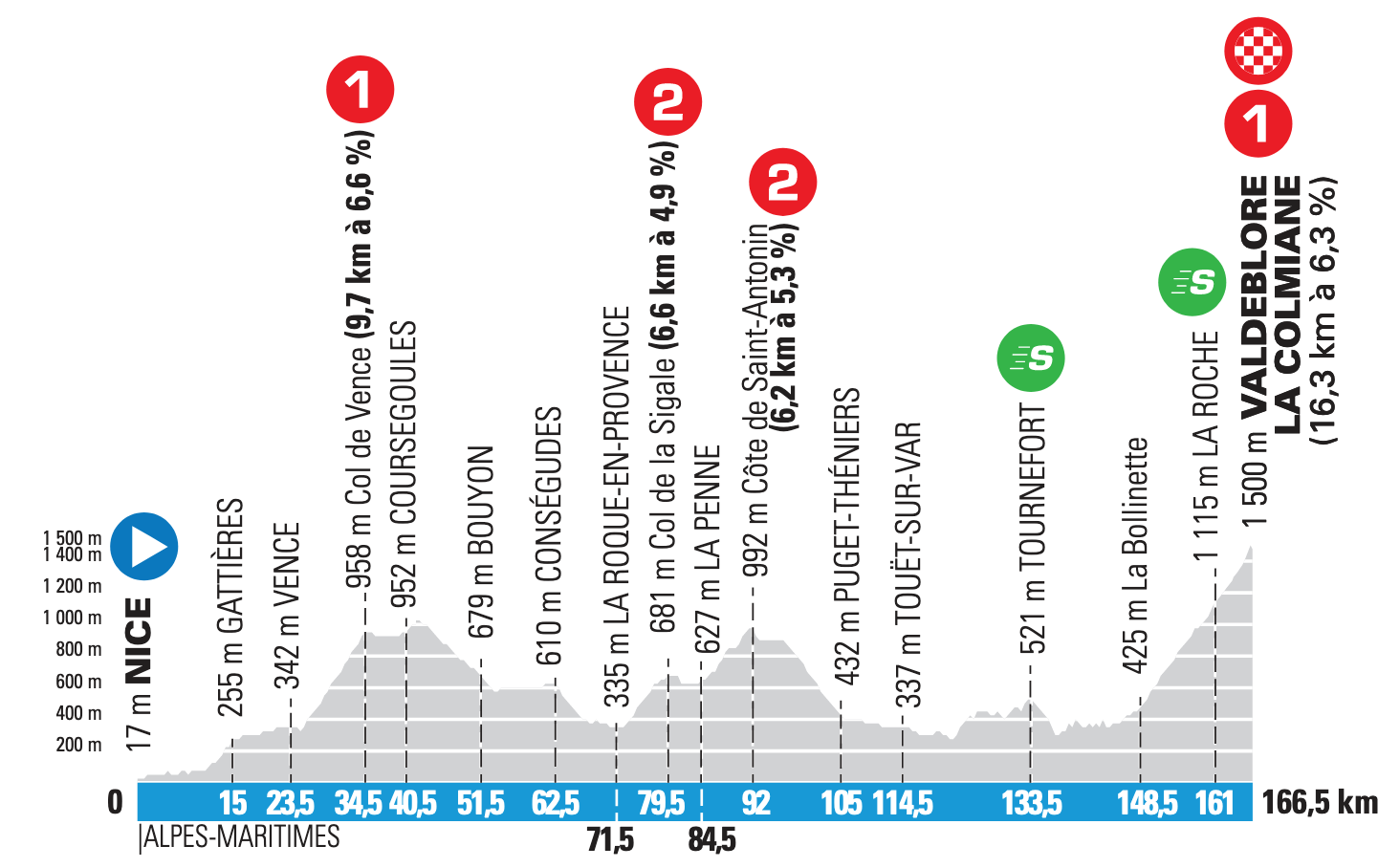 Stage 7 and a copy of last year’s stage won by Nairo Quintana and where Max Schachmann just held onto his yellow jersey. It’s a route where the promise of the high mountains excites more than the actual racing because the climbs here steady rather than savage, where drafting pays and it’s a gradual elimination race on the final climb before the decisive attacks late on. One reason the route is the same is October’s flood devastation just to the other side of La Colmiane, roads and homes were swept away in the Tinée valley below and so far there’s only a partial reconstruction so it’s off-limits. 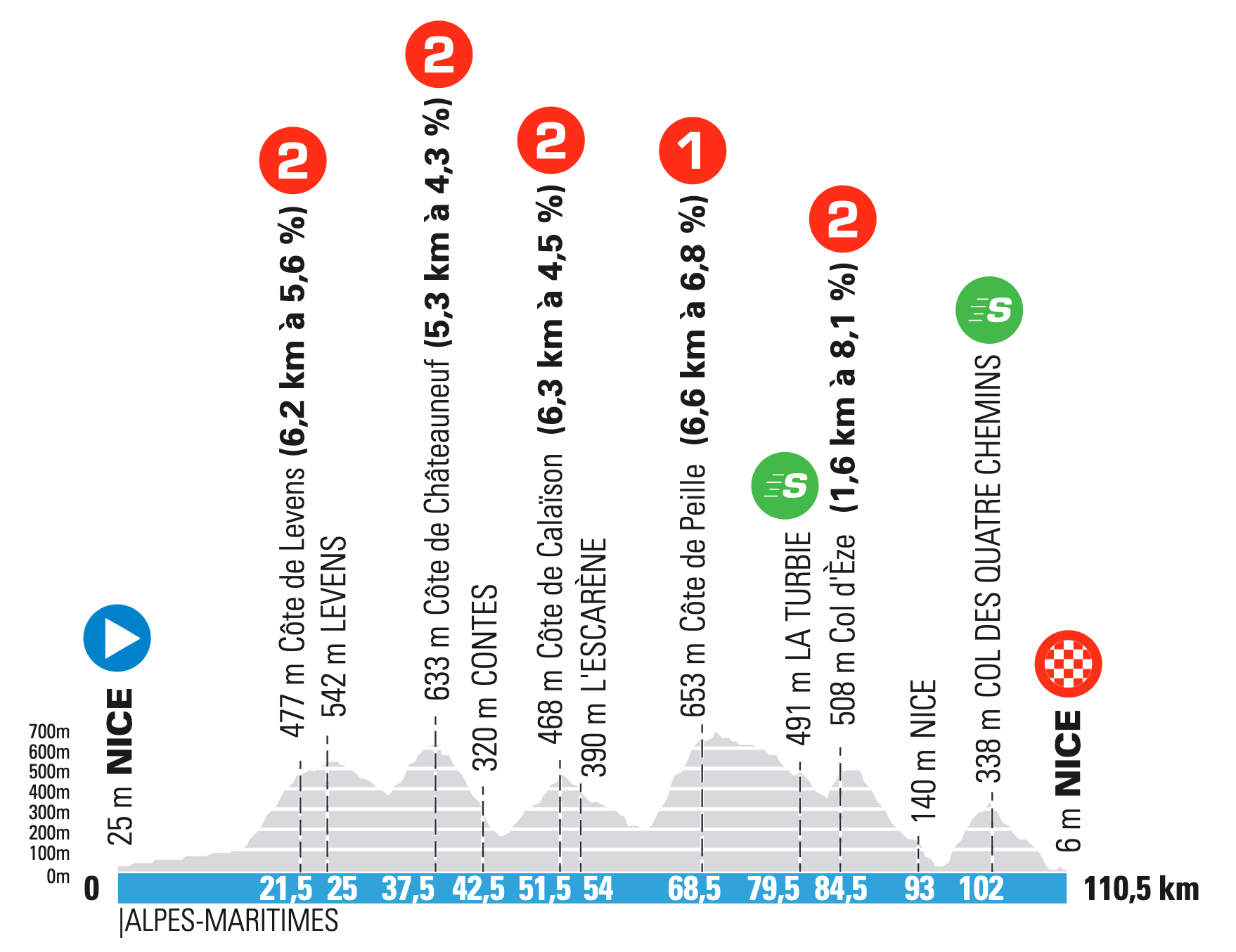 Stage 8 is very Nice and the by now usual route the in hills and hopefully the stage for another corniche cliffhanger. It’s just 110km, up and down all day and frequently on twisting roads that make it hard for the peloton, or what’s left of it, to chase.

Wildcard invitations
It’s the 19 World Tour teams plus Alpecin-Fenix with the automatic right and Arkéa-Samsic, B&B Hotels and Total Direct Energie get the invite. Under the rules Paris-Nice can invite up to five teams but have gone for three, a total of 23 squads. The big question is for the Tour de France where with the 19+Alpecin means two places left so one of the three wildcard teams faces doing the Tour of Austria instead. Normally ASO announce Tour invitations in January but this year the talk is they could be awarded later which would mean huge pressure on the three invited teams in the first part of the season.

The Covid bit
Nice is currently under night-time curfew but who knows what the situation will be in France or the peloton by March, better or worse? For now organisers and teams can only plan and announcing the route is part of this. Presumably ASO will be deploying the same hygiene methods (bubbles, mobile testing etc) used last season.

Overall summary
Some long transfers early on and plenty of déjà vu with finishes in the familiar towns and staple climbs like Mont Brouilly, La Colmiane and the final day’s loop around Nice. Why mess with a winning formula? It means bloggers don’t need lengthy recon rides and more importantly the short time trial is enough to prise apart the GC without determining it, it should keep things close to the end.