When the route for Paris-Nice was announced Mont Brouilly was one of the novelties. Announced with fanfare ASO said this climb had sections at 25%, a fact widely reported by everyone but ride it for real and it’s just not that steep.

Here’s a detailed look at the decisive climb for Wednesday’s Paris-Nice stage. There’s too much info to cram in a stage preview and so here’s a separate post along with notes on the surrounding area which offers some fine riding and more.

The Route
Starting from St Lager in the Rhône department in eastern France, the Montée de la Chapelle (“Chapel Hill”) heads up through the vines to a chapel on top of the hill. It’s 3.5km long at reaches 486m above sea level. Note the profile above from ASO says the climb tops at 500m – it doesn’t and the average gradient is more like 7% rather than 8%. But the average hides the staircase-like climb with steep ramps and flat sections. 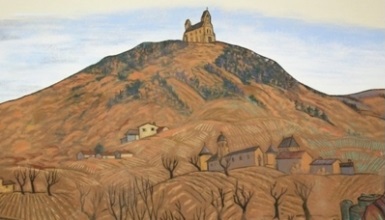 The Feel
Play word association and, in France at least, Brouilly says wine. The area is one of the 10 appellations for the Beaujolais wines. You don’t need to be a wine anorak to know this, ride and it’s inescapable for the cyclist as even before you hit the start you’ll see the vines and the local road traffic includes the baby tractors used to work the vines.

The Mont is obvious, a big rounded lump that stands proud even if it’s overshadowed by bigger hills behind to the west. The road leaves behind the scenic village of St Lager with its pastel buildings and sandstone tones. You pass the cemetery but there’s no rest here. It pitches up and quickly takes on an agrarian feel as it narrows and everything is about the vines and their wines. This is monoculture on a grand scale, the land razed for the evenly spaced vines. Climb in March and workers bob up and down as they prune the vines ready for the new growths but it means a brown landscape, exposed soil everywhere without the greenery of the vine leaves, just bonsai vine stumps. If there’s a breeze it’s felt instantly, the empty vines mean the road is as exposed as a cabbage field in Flanders. The route isn’t always obvious, a series of sideroads tempt the rider away but follow the signs for La Chapelle.

The road passes a strange water tower, it stands out because it’s painted a strange blue. It’s here that the serious climbing begins. The road is narrow – room for one car – and there are regular cracks that run side to side, tiny ridges to steal speed. There are some hairpin bends.

Onwards the slope gets to you. It’s not the gradient, it’s the gradients. The slope is constantly changing, like some kind of giant staircase. You click up a gear, you click down a gear. As the top approaches there’s a section through woodland where the road rears up. It’s steep but short here, you can spot a telecommunications mast and then the chapel, Our Lady of the Grapes, which sits proud at the top. Take in the view if you can but the descent begins immediately. The way up from St Lager is irregular and twisty but the descent is more linear with predictable hairpin bends. 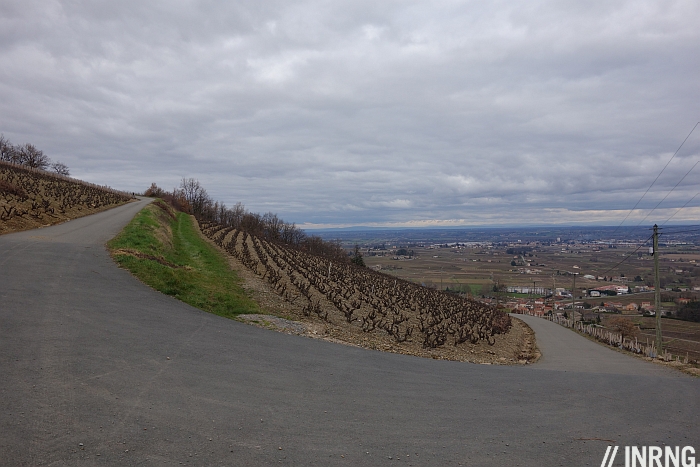 25%?
I didn’t see it. Perhaps a student surveyor tasked with tracking the steepest line on a hairpin bend would find it but given the liberty to choose your line you won’t find 20%. Even 15% was rare but I didn’t stop to deploy my theodolite. Going by feel it was plenty steep. 3km at 8% would be hard but this is worse because the gradient keeps changing. A ramp at 14% robs you of speed so by the time it eases back to 4% you’re finding it hard to accelerate. It’s the irregularity that makes it a pig of climb. Sprinters will be ejected and even rouleur-climbers will be dejected by the changes of pace.

Downhill
Ride up and you’ll wonder who is more crazy. You or the downhill MTB riders as you spot the infrastructure of an MTB trail. There’s an annual race.

Haut Beaujolais
Many travel to Mont Ventoux just to climb it but nobody’s going to Mont Brouilly as it’s got neither the legend nor the challenge. Many visit for the wine and around the foot of Mont Brouilly the roadsigns have the feel of a wine menu with place names like Juliénas, Morgon and Chiroubles. It’s pleasant but head west and you leave behind the vines for forests and twisting roads of the Haut Beaujolais. The rolling hills are covered with an impressive network of roads which have little traffic and on a good day it’s idyllic. It’s reminiscent of the Apennines in central Italy, an agricultural heartland with rolling hills and once upon a time these were the training roads for Bernard Thévenet, the Frenchman who ended Eddy Merckx’s reign in the Tour de France. There’s no must-ride route, just head west from Mont Brouilly and explore the hilly roads and forests. Be warned that in July and August tourist season is literally in full flow as the café terraces are crowded by wine drinkers who come for a more leisurely stay.

A list of previous Roads to Ride can be found at inrng.com/roads