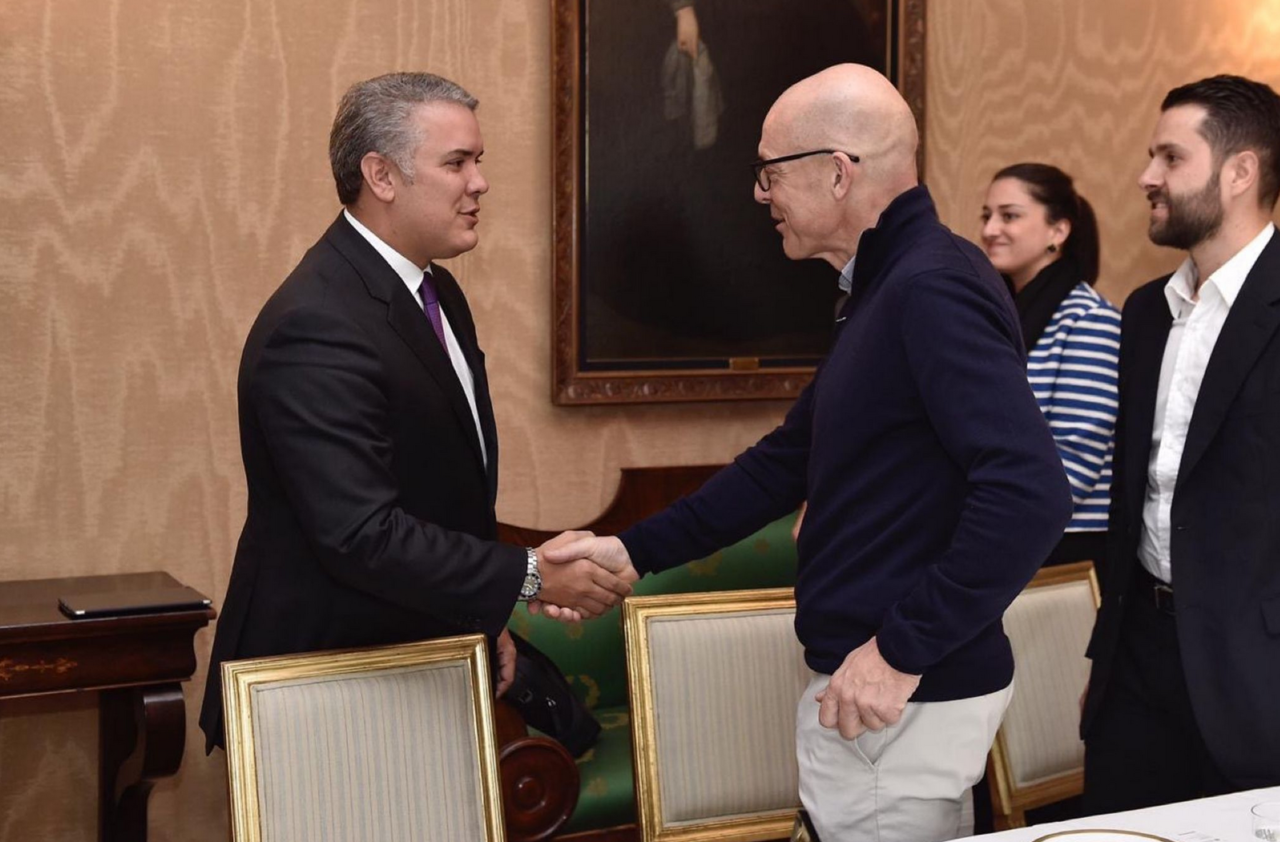 La Gazzetta Dello Sport reports that Ecopetrol could be the sponsor to replace Sky, that it could lead a collection of Colombian firms who would take over and turn Team Sky into a Colombian vehicle. It’s an oxymoronic name for a firm but as a Twitter correspondent explains it comes from Empresa COlombiana de PETROLeos or “Colombian Oil Company”.

It’s both a big company with profits of over $2 billion, but a relatively small oil producer with just under two billion barrels of proven reserves which is the amount by which the likes of Exxon and Saudi Aramco increased their reserves recently, the latest increase in their reserves is roughly what Ecopetrol sits on. Last week the Colombian press reported that Rigoberto Urán met with the President and the sports minister to discuss a national team but curiously there was no mention of Dave Brailsford… but he was there. Over on Strava Dave Brailsford writes about meeting El Presidente (as well as travelling to Miami, London and then going back to Colombia this weekend, perhaps not a journey you’d do for fun). Meetings are happening and it’s not every day a team manager sits down with a head of state and this is oil well and good but there’s still a clock ticking, if there’s no news by March then riders and their agents may get restless: better to secure a contract at today’s prices rather than wait until later this year when there could be a flood of Sky riders on the market so whatever the outcome the new sponsor will have to be lined up very soon.

Doctor vs patience: Shopping far afield for sponsorsan help in other ways too with the British media reporting on the delayed medical tribunal for Doctor Freeman, the former British Cycling and Team Sky medic: a cloud hanging over the team. I spent too long reading PDF downloads of the British General Medical Council’s tribunal rules so you don’t have too and a summary is this is a civil hearing where they have to give Doctor Freeman and his representatives every opportunity to put their case because otherwise trying to rush things would leave them open to appeal and even court case. There’s no time limit and however often Freeman seems unable to attend he has to be given every courtesy to cooperate, the tribunal can’t impose a deadline to show up. What’s at stake in the first order is Freeman’s right to work as a medic in the UK but for most readers it’s the second order consequences that are worth watching, if during the process it emerges that Freeman did indeed deliberately order testosterone, a banned substance, then he is open to a doping ban himself just, for the want of a better term, on possession (WADA Rule 2.6.2). As a medic if he did treat a member of the public as part of his private practice then he’d likely have medical notes, prescriptions, correspondence and other records to back this up. If this was for a rider on Team Sky or the British track team – note the corticosteroid used by Bradley Wiggins was delivered around the same time – then things get way more serious but for now we’re struck in the procedural and pre-hearing phase, it’s a case to watch but nothing can kickstart things.

A tale of two races: Watching the Tour of Colombia you can see the passion, if little else given the rather weak TV production. The huge crowds are a contrast to the upcoming UAE Tour where teams go to practice their echelon formations and quite possibly collect appearance fees but the event feels unloved and lacks soul. Cyclingtips has a good read about awarding races to countries with questions over their human rights record but I’m not sure the UCI could ever rule this way, it is an international governing body, it can’t have member federations from all around the world one minute, then deny them races the next: doubly so because it is constitutionally tied to the Olympic movement and its principal of political neutrality. But what if we didn’t look to the UCI to act for us? If you’re not happy about the UAE Tour or think Bahrain is a dubious team sponsor then switch off, unfollow or ignore them and their sponsors.

Summer Rainbows: Staying with the UCI, it’s been announced the 2023 World Championships will go to Scotland. Two things are different here, first that the World Championships will be multi-disciplinary with BMX, track, MTB and more all together and at the same time. It was a campaign pledge by David Lappartient and made good electoral sense because if many of us see the UCI through the lense of road cycling, it does a lot more and here’s a way to get the whole “family” together and therefore it’s of big interest to lots of cycling officials… who make up the electorate in the UCI. This explains the why and how this has happened. But it’s not all Beltway dealings, it’s also mouthwatering. Why? Because the championships are going to be held in August rather than the current slot of late September and this means the potential for riders coming off the back of the Tour de France to take part, much like things used to be once upon a time (and a bit like we see in the Clásica de San Sebastián) meaning a lot of big names in contention rather than those who are still motivated come the end of the season.

2020 Worlds course: Keeping with the Worlds, the UCI has awarded the 2020 edition to… Aigle in Switzerland, the town where the governing body is based. It sounds like a bro deal but in a press conference today Aigle and co-host of Martigny, another town a short spin up the Rhone valley, mention a budget of CHF 17 million which isn’t cheap. Aigle ought to be a bigger cycling destination with the nearby mountain roads it has to offer and the route will showcase some of this. Earlier today the press conference confirmed the route with finishing laps for the road race borrowing the lower slopes of the Col de Forclaz, 3.9km at over 9% so it’s for the climbers. The TT events will be pan flat in the Rhone valley.

Down to three: talking of Bahrain-Merida earlier, they’re one of only three World Tour teams left without a win so far this season with Ag2r La Mondiale and Team Sunweb. Does it matter? Every team wants to get an early win, it’s more a problem if nobody has won by the end of April. At a guess Ag2r are likely to be the stragglers because they don’t have a great house sprinter, they have to win from breakaways which are statistically less likely to make it to the finish, and then to win from this.

Shimpagnolo: staying with Ag2r another challenge is building their bikes. The team website listed Campagnolo has an official supplier earlier this week but there’s now a blank white square and the team is switching to Shimano reports Matosvelo.fr. Some teams do still buy their own groupsets but it’s unusual to change during a season. The team is still without new TT bikes because their new sponsor Eddy Merckx doesn’t make them, it’s a brand owned by Ridley.

Points mean places: In an interview with Het Nieuwsblad, Israel Academy DS Eric Van Lanker explains the team wants to place riders as often as possible in order to win UCI points because this will land them invitations under the new UCI rules for 2020. Of course winning delivers more points but placing several riders in the top-10 can achieve this and is arguably easier; Wanty-Groupe Gobert executed this at the Tour de France last year during the first week, for example with  6th, 9th and 10th place on a sprint stage when if the trio had worked together in a train they’d still have almost no chance of the win. The result was they won the team prize that day and got on the podium, were named and so on and it was valuable to them. It creates a paradox though as a team like Israel Academy aiming to place for points may not enliven a race as much as the organisers want and so they could struggle for invitations if they don’t show some flair too. The problem here is the system – if teams feel they’ll be rewarded for conservative results then they’re making a rational response – which encourages this when it ought to ask lesser teams to take longshots.