At the start of the year 10 riders were picked to follow during the season. These were not necessarily the best riders – why didn’t you pick Sagan was a refrain in the comments – but more those with a point to prove, a story to tell or some other interest. How did they get on? For Greg Van Avermaet it was a question of what more could he do? 2016 had seen spring classics, a spell in yellow and then Olympic gold so how to follow that up? As joked here before it was all great but someone – probably Roger De Vlaeminck – would be propping up a bar saying “But Jonge, you haven’t won De Ronde“. GVA still hasn’t but instead he took the Omloop Het Nieuwsblad, was second on the Strade Bianche and won the E3, Gent-Wevelgem and Paris-Roubaix… and was second to his great rival Peter Sagan in De Ronde. Much of the spring was consumed by Tom Boonen’s farewell tour so it’ll be interesting to see how GVA fares in 2018 with the weight of expectation on his shoulders but as we saw this year he can deliver. The rest of 2017 was solid but not spectacular, second on the GP de Québec, sixth in the Worlds. Fabio Aru has a Vuelta win and has twice stood on the podium of the Giro but 2016 was a season to forget, his stage win in the Dauphiné achieved on a descent symbolic of how he could not drop his rivals on the climb so could he get back to grand tour glory in 2017? Yes and no, the year was better but rushed. In April a crash in training hurt his knee and he was forced to sit out the Giro which must have hurt even more as it started on his home island of Sardinia. He switched focus to the Tour de France and in the build-up took the Italian national championships with a bold solo win. In the Tour he won at La Planche des Belles Filles and wore the maillot jaune yet paradoxically neither he nor his Astana team managed to weigh on the race as much as these results might imply. If anything his brief spell in yellow meant Team Sky could deploy alternative tactics for a day and it contributed to one of the best days of the race on the stage to Foix. He finished fifth overall and then went onto ride a discreet Vuelta as contract talks happened and he and his entourage arranged a move to UAE Emirates which left Astana boss Alexandr Vinokourov claiming he’d sue. Now Aru will return to the Giro and 2018 will be crucial to see if he’s a gadfly, an animator who can win stages and wear the maglia rosa for a day or two or whether he can win the general classification in a grand tour again. So far the forecast Giro route says he’ll be hunting stages and popularity in the Giro and aiming for the Vuelta. “Thibaut Pinot had a great season in 2016 until the wheels came off mid-summer” said January’s piece. Bis repetita as he had a great 2017 until mid-summer only this time he came back for late season flourish. At the start of the year he beat Alberto Contador in a duel on a summit finish of the Vuelta a Andalucia, Contador proving too excitable as Pinot paced himself better. Pinot then ran a close second to Peter Sagan in an uphill sprint in Tirreno-Adriatico and had a top-10 in Strade Bianche. After finishing second overall with a stage win in the Tour of the Alps he went into the Giro as a real contender, took a stage in Asiago and finished fourth overall, a great debut for the Frenchman who loves racing in Italy and enjoys popularity and recognition from the tifosi. He had to race the Tour de France but his recovery was off and he seemed to be there out of duty rather than desire and eventually quit the race only to recover in time to win the Tour de l’Ain where he shepherded his 20 year old team mate David Gaudu to a stage win and then continued his season with Lombardia in mind where his flurry of attacks on the final climb of San Fermo della Battaglia lit up the race although Vincenzo Nibali profited. A solid season but there’s talk FDJ – the state lottery, not the team – could be privatised by the French government and the team needs even more Tour success than Arnaud Démare’s sprint wins. Dylan Groenewegen was the pick of the sprinters as the up-and-coming sprinter but a curiosity because his media profile is relatively low in a field where the challengers to Kittel, Greipel and Cavendish normally bathe in limelight. 2017 was mixed, he had a lot of podium places, plenty of top fives but only eight wins and a very busy season: when measured by kilometres raced only four riders managed more than him. Over-raced? Possibly but maybe he thrives on the distance? He’s been central to Lotto-Jumbo and delivered a prestige win on the Champs Elysées, his biggest sprint by far. 2018 will see if he can deliver more World Tour wins.

Tiesj Benoot is still a hard rider to categorise. Labelled in January as the “best climber among classics contenders” this label stuck again, in fact it’s been ironed on. He had several top-10s in the spring classics and then had a good Dauphiné and finished 20th overall in the Tour de France. He was often instrumental in the success of Tim Wellens who could attack knowing Benoot was there to mark rivals or ready for the counter move. But no wins and only two trips to the podium for a rider with such an obviously big engine. Rohan Dennis was the hot prospect who was starting to cool. 2017 was supposed to be about switching from time trials to stage races but his luck ran out in the Giro when he crashed in Sardinia and had to leave the race. But things had been on track before this including a select bunch sprint win in the Tour of the Alps. Would he have pushed Tom Dumoulin in the Giro? Probably not but he would have added plenty to the race. He recovered to win two stages in the Tour de Suisse and then went to the Vuelta where the plan was to aim for the TT stages and try some efforts in the mountains, he helped BMC win another team time trial on the opening day but didn’t make it to the Logroño time trial which could have really suited him. All told he might have dropped off your radar a bit but look out for him in 2018.

Marianne Vos was back racing and winning again. Only she’s no longer the best Dutch rider in the women’s peloton as Annemiek van Vleuten and Anna van der Breggen being ahead of her on the UCI rankings. Vos has turned 30 and turned to team management too with the WM3 Pro Cycling team which has signed up Belgian online payments firm WaowDeals as the title sponsor for the coming years. On the road she won the European Continental championships and collected multiple wins and her presence in the bunch helped team mate Kasia Niewiadoma ride away with the Women’s Tour of Britain. The injury problems are behind her. Michał Kwiatkowski made it to the finish of a race with Peter Sagan and beat him and then the rest of the year saw him caught between high ambitions and team duties. That was the tale of 2016 as we looked into 2017 and a scenario that was, if not copied, shared similarities. Kwiatkowski won Milan-Sanremo with a deft sprint and took the Clasica San Sebastian too. Once again he was a luxury lieutenant for Chris Froome in the Tour de France, one of Sky’s millionaire domestiques and you might remember him theatrically throwing away his sunglasses and moments later proverbially pulling up the handbrakeafter taking a long pull for Chris Froome on the Col d’Izoard. More people around the world probably saw this than watched him win in Sanremo. He’s a crucial rider at Team Sky and we’ll see if he can move onto picking off one week stage races. 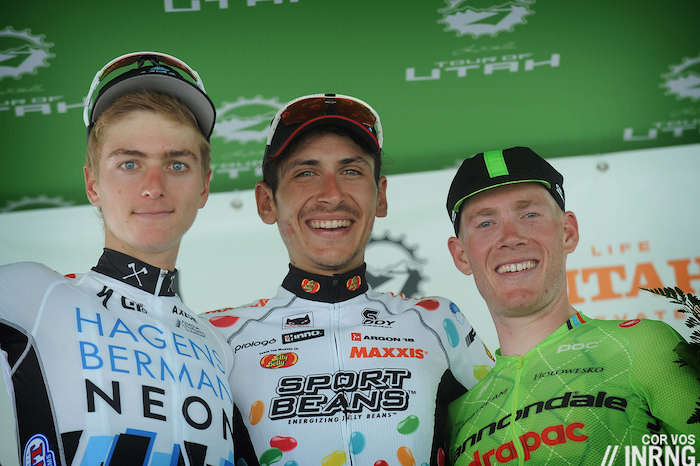 Lachlan Morton was picked out of interest in the character, the man rather than the results. He rode his way back into the World Tour after winning the Tour of Utah in 2016 and 2017 saw him bank a Vuelta a España in his legs, make the top-10 in Oman and finish as the best young rider in the Tour of California, a youth competition that is worth watching as many top teams bring talent. In hindsight the photo accompanying the piece is now as interesting given Adrien Costa is taking a break from the sport and Andrew Talansky took a surprise retirement when it was Morton who helped frame the idea that the World Tour peloton isn’t for everyone with its Whereabouts system, travel, the obligation to post sanitised messages tagging sponsors on social media and so on.

Bryan Coquard finished 2016 as one of the best riders in the world, or at least 10th on the CQ Rankings which was impressive given he rides for a second tier Pro Conti team. He’s still yet to win a World Tour race and the talk early this year was he’d join a World Tour team to support him achieve this, BMC were among those mentioned. Team manager Jean-René Bernaudeau wasn’t happy about losing him but accepted Coquard’s need to move up… only for things to change in the summer when Bernaudeau learned he was talking to rival Pro Conti teams. It’s one thing to lose a rider, another to have them go only to become a direct rival in local races on the French calendar and Bernaudeau was livid and effectively benched Coquard for the rest of the year. A fiasco, a coq-up but saved by Lilian Calmejane’s Tour de France stage win which gave Direct Energie the kind of headlines they craved. Coquard goes into 2018 as he went into this year in need of a big win only now he’s the figurehead of a new team in search of a Tour wildcard.