A hilly stage with but with few chances of a bunch sprint remaining several teams will want to set up their sprinters as the race heads inland. Stage 6 Review: a lively stage but one of those days where if you glanced at the results sheet it wouldn’t tell you much. It took over an hour before a move could barge clear, 11 riders and then the group swelled to 37 and this kept the speed up and the stage would eventually finish 25 minutes ahead of schedule. In due course Maxime Monfort of Lotto-Soudal and Bob Jungels took off from this move, two powerful rouleurs but too much too soon although it allowed Monfort’s team mate Tomasz Marczyński to sit tight. Come the final climb and Marczyński made the winning move and duly won the sprint, the 33 year old’s biggest result. The action came on El Garbí, the steep slopes saw Alberto Contador attack and Chris Froome follow and only Tejay van Garderen, Carlos Betancur and Jan Polanc could follow the pace, all of Team Sky were blown away and several riders were caught out by bad positioning, notably Romain Bardet. This set up 45 minutes of tension including a fraught crash for Betancur and van Garderen which put the Colombian out of the race. At one point it looked like Contador and Froome could try to ride away from everyone else but eventually the race regrouped and TV viewers got their breath back. It didn’t come to much but shows Contador’s problems in Andorra seemed to have been left behind in Andorra and bodes well for more action this weekend.

The Route: the longest stage in the race, 207km and there’s little to describe along the way, literally given the vast open terrain and sparse population, riding into a town is a feature here. It’ll make for impressive TV if you can watch on a big screen.

The Finish: they ride into Cuenca and out to climb the Alto del Castillo, a hill topped by a small stone tower and bristling with communications masts with views of the river gorge and road back into town below. It’s two kilometres at 7% but bites from the start with 10% for 500m before easing off. After a junction to pick up the descent, a twisting road along a river gorge. It leads to the finish and with two kilometres to go they reach Cuenca and a big boulevard finish for the final kilometre.

The Contenders: Matteo Trentin (Quick Step) is the safe pick. He could go in the breakaway, he could win a bunch sprint and Quick Step will back him on this hilly terrain. Similarly J-J Lobato (Lotto-Jumbo) and Sacha Modolo (UAE Emirates) can cope with the climbs and seem in reasonable shape. Team Sunweb’s Søren Kragh Andersen is an outside pick too, he’s contesting the sprints but is much more than a sprinter. But there’s a good chance for a breakaway.

Weather: hot and sunny with a top temperature of 31°C and a light 20km/h breeze from the south. 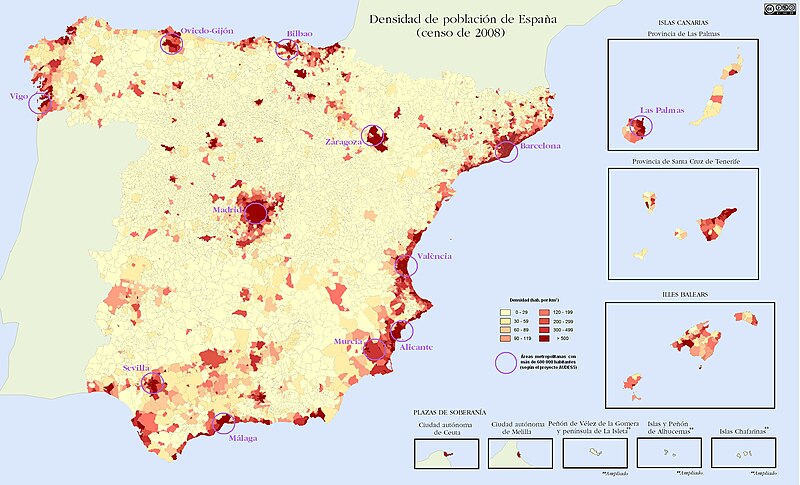 Daily Díaz: Say goodbye to the overpopulated coast, and say hello to the underpopulated interior! Valencia province’s population density is 233.1 pop/km2 , while Cuenca province’s is 11.9. As you can see in the map, the distribution of the Spanish population is quite uneven. Roughly speaking, 72 % of the population live in 26% of the space (the coast, the archipelagos, Madrid), which means 28 % of the population live in 74% of the space (the rest). One part of Spain is Connecticut, and the other is Minnesota. Differences in the environment and the economic structure explain this, as well as the migrations inside the territory. It is not an exclusively Spanish feature, and I am sure that in many other countries similar inequalities appear.