The Rise of Nationalism, The Demise of Races

Nationalism, nativism and populism are on the rise across Europe and beyond. Some like it, some don’t but put your take on this aside for a moment if possible because there’s sporting connection to it. Or at least there used to be. Many bike races have a long history of nationalist association, whether as expressions of patriotism or symbolic illustrations of occupying the terrain. Will today’s politics bring new bike races.

Donald Trump hogs the headlines but across much of Europe other political outsiders are trying to make inroads. Each country is different, often very different, but to use a broad brush there’s a shared theme of nationalism and populism across the continent, for example the National Front tops the polls in France at the moment ahead of the presidential elections due in spring; what is Brexit but a reassertion of national identity? There are independence movements in Catalonia, Flanders, Scotland and other places. Nativism is growing from Poland, the Netherlands, Austria and Denmark. Some are in power, most are not.

The route of Stage 7… or the map as a political and military symbol?

Is it history repeating? Certainly these forces are not new. Go back a century and the Tour de France was part of a nationalist streak in France. Race organiser Henri Desgrange is often celebrated as a promotional visionary who launched the Tour de France as a marketing stunt to sell newspapers but we skip over his other side, the one where he labelled Prussians “bastards” and called on his countrymen to “slam the butts” of their rifles into German chests until the blood spilled. For context France had been invaded by Germany so this was a war cry from Desgrange rather than an incitement to murder but it’s shocking to read all the same.

It wasn’t just through his pen or typewriter that Desgrange expressed his national preferences. He designed the course of the Tour de France as an exercise in nationalism, tracing a route to stir national pride with visits to German regions before World War I, lands that France claimed as its own: the symbolism of the Tour de France extending into disputed terrain was obvious. Once the war was over and land ceded to France in the 1919 Versailles Treaty Desgrange wasted no time sending his race to these newly acquired places, declaring “Strasbourg, here we are at home” and delighted in visiting the city of Metz, for years a German military base with a direct rail link to Berlin, so much that it featured every year until 1939.

This idea of a bike race as an exercise in national affirmation wasn’t unusual. The Giro d’Italia was a means to unite a country that was only created in the late nineteenth century, a thread to stitch the regions together. John Foot’s excellent Pedalare! recounts several examples of Italian national pride being played out via the Giro, such as its visit to Trieste in 1946, then a disputed city between fascists and communists, a provocation that required a military escort and the riders were stoned, the full story is a reason alone to read Pedalare. Foot translates an excerpt from La Gazzetta Dello Sport:

The Giro d’Italia has been reborn to transcend a higher duty which transcends itself. Its problems are part of its success. Neapolitains and Turinese, Lombards and Laziali, Veneti and Emiliani… All Italians [all] part of a single civilisation and with one heart they all see the Giro as a mirror in which they can recognise themselves.

Similarly there are many races that used a bike race as a theme to create national unity or even internationalism such as the Peace Race with its assertion of soviet superiority and harmony between East Germany, Poland and Czechoslovakia. The Tour of Flanders was created in part to bolster Flemish nationalism.

This isn’t the stuff of the old days and old ways. The Giro di Padania was run in 2012 and 2013 with political backing to promote the separatist agenda of the Northern League and bolster the idea of “Padania”, or a northern Italy but folded after it was dogged by protests. Italian identity works the other way too and in 2011 the Giro’s route was specifically designed as a “Giro that celebrates 150 years since Italian unification, underlining all the specific things that are important for our country, not just sporting but also cultural, social, political, geographical, artistic, agricultural and gastronomic” said race organiser Angelo Zomegnan. Basque identity but not a politician in sight

There are too many races to list that have had nationalist purposes. Spain has three stages in the World Tour, the Vuelta a España of course but also the Volta Catalunya and Vuelta Ciclista al Pais Vasco. What do Catalunya and the Basque Country have in common? A strong identity and independence movements and this might explain the prominence of these events. But it’s not so simple, these are also among Spain’s wealthiest regions and cycling is particularly popular in the Pais Vasco. Causation and correlation overlap here, these races exist for a lot more than regional pride and nationalist sentiment.

Meanwhile the Tour of Flanders continues to cultivate the Flemish regional identity, celebrates the Flandrien and sees political parties with regional separatist agendas handing out those yellow and black lion flags. This doesn’t make De Ronde a political event, it’s got more to do with sport – and beer – than separatism, but it is a vehicle for those with a political agenda too. 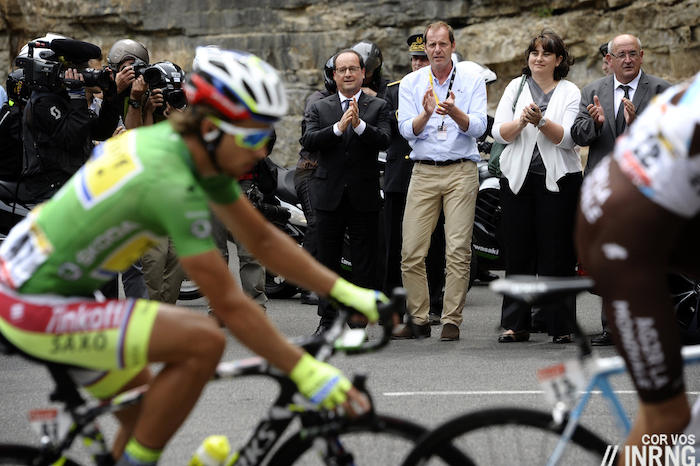 France’s most powerful man in July, and François Hollande

So cycling has a rich history of races which exploit national identity. If nationalism and nativism are on the rise will this be reflected again in the sport? As frenetic as the politics might get these days cycling seems largely untouched and will probably stay this way. A politician, whether mainstream or maverick, needing a stunt or gimmick today doesn’t need a bike race when they can propagate a meme on social media for free. In fact this time it does seem very different because politics and cycling are often distant, see how few politicians show up at the Giro d’Italia these days and even the 100th edition won’t visit the capital in Rome.

Meanwhile on the other side of the Alps France’s National Front sees the Tour de France as a threat rather than an opportunity, denouncing the race’s foreign forays in a press release issued last October after the route presentation:

Year after year the Tour de France finds itself denatured… …while it ought to value the beauty of our nature and the history of our country… France must became France again, and no longer a simple part of the indigestible substrate of Brussels”

The irony is that Desgranges delighted in taking the race abroad, a means of imposing France itself on a foreign landscape. Taking the Tour to Düsseldorf is hardly an act of defiance but it’s still an export of French culture and a valuable export.

Maybe 50 years ago a Soviet trick would have been to rustle up a bike race in Crimea but today there’s nothing of the sort. Even the Presidential Tour of Turkey makes a nod to President Erdogan but it sticks largely to a tour of beach resorts rather than a defiant procession through Kurdish regions to the east.

Instead the political ambitions seem much smaller. A shake-up of local government in France has seen regions merge and races can help in the re-branding, for example the Four Days of Dunkerque stage race in northern France is also branded as the GP des Hauts-de-France, named after the new name for the merged Nord and Picardie regions. But these regional mergers could also endanger races, now that the Poitou-Charentes and Limousin regions of France have been folded into a larger region labelled Nouvelle Aquitaine where will the regional funding for each race come from? Who knows but see how we’ve gone from exploring whether the rise of nationalism will bring more bike races to querying whether regional government subsidies will help keep a few races afloat. The Giro turned Belfast pink for a day

Perhaps the answer is that bike racing doesn’t matter like it once did. People are not following the race as an expression of their nationality and nor is a race a means to explore and exert national borders. Riders are not marketed as rugged individuals who toil away, sporting Stakhanovites to embody pre-set propaganda values. They’re just athletes now, no bad thing. Besides, stage a race in one country and chances are a foreigner will win given the peloton is so cosmopolitain. Similarly races are not sold as meaningful events of national significance, instead the promotional talking point is live heart rate data. Besides the peloton is so international these days that if one country wanted to turn its own race into a patriotic affair there’s a very high probability it’s won by a foreigner.

Conclusion
Right from the start bike races have exploited a nationalist streak; or nationalists have exploited races. It’s not from a bygone era either, contemporary races can still be used by politicians as we saw with the Giro di Padania a few years ago but it’s rare. Now with nationalist tides lapping across Europe and beyond it makes you wonder if this will lead to a revival of races? Probably not, it’s more likely to bring a rise in racism rather than more racing. The sport no longer seems to be the popular vehicle that it once was, instead business and athleticism come first and any national promotion is of the softest kind, a tourism promo rather than a claims of national superiority. As such it’s a relief that cycling remains a sport without much a political agenda. Yet the fact that politicians don’t see cycling as useful to their ends maybe says something about sport’s diminished role too.