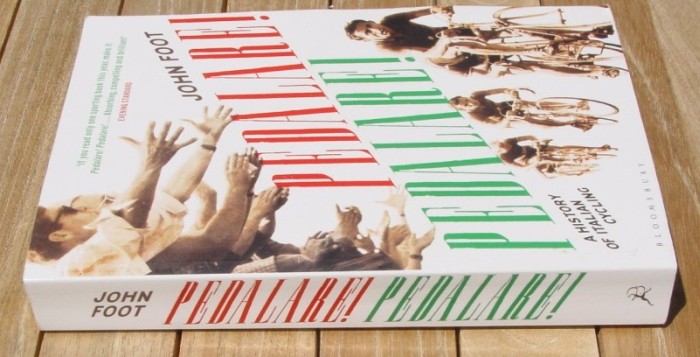 Pedalare! Pedalare! A History of Italian Cycling by John Foot

How important is cycling to you? You might enjoy riding and following the pro races but what if cycling prevented a civil war? What if two cyclists formed the greatest sporting rivalry of all time? What if cycling was inseparable from politics, religion, the economy and society? Welcome to Italy, at least to various points in Italian history when these claims have been made.

The book opens with the tale of Enrico Toti, a one-legged soldier who cycled around the front line of the First World War and became a wartime hero in Italy. His tale mirrors the early era of race reporting where nobody could verify a story and newspapers competed to outsell each other with tales of heroism. The “cycling soldier” was no racer, he just used the bike for mobility. But with Toti author Foot is able to show how myths are created, how political forces in Italy appropriate tales of individual actions in order to make a story about an entire nation. This scenario will be repeated with many racing cyclists in the years to come.

The book is collection of chapters covering Italian cycling from the earliest of days until the present day in chronological order. Foot is an academic and it shows. First the chapters are self-contained, some facts mentioned in one chapter appear in another, almost as if each chapter could qualify for an academic journal. Indeed it is well-referenced with comprehensive footnotes. Best of all Foot is not a sports writer but a historian and brings a wider analysis to the subject because this is not just Italian cycling but the history of a nation told via sport. He is able to explain economic changes and analyse the political events around them.

But don’t be put off if you’re worried about a heavy tome on twentieth century Italian politico-economics. Instead there is expert detail about the sport, from the pedalling style of Fausto Coppi to the blood chemistry of Marco Pantani. But cycling was so great to Italy that at times it was linked to wartime acts of heroism, other times to war crimes and it is said to have prevented civil war. Cycling was the talk of the Italian nation. Even the Pope spoke about Gino Bartali from the balcony of the Vatican. Given the way cycling crossed into politics, economics and religion Foot does a great job of explaining everything.

One of the central tales of the book is how cycling has been used and appropriated. In 1948 there is tale that during the Tour de France Gino Bartali was languishing. But in Rome, Palmiro Togliatti, leader of the Italian Communist party, was shot and protests and strikes broke out across the country. Revolution, violence and even civil war could have broke out as anxious communist supporters across the nation waited for the signal to start a revolution. But the incumbent prime minister is said to have phoned Bartali in Cannes and asked him to win the race “for Italy”. Bartali won the next three stages and the Tour de France and talk of a revolution dissipated and workers returned to work. Did Bartali save the nation? There is an oft-repeated tale that Togliatti’s shooting in Rome contributed to Bartali’s win and in turn his triumph in France led to an eruption of national pride and joy that quelled the insurrection. Is this really so? Probably not, even certainly not. But the idea that a win in the Tour de France can prevent upheaval is quite something. Foot analyses the myth and those behind it.

There are other tales when cycling becomes crucial to the national interest. See the story about Trieste and Cottur or the way the maglia nera for the last rider was able to quietly mock Italy’s fascist Blackshirts, a sign that an inglorious past was buried for good. Was Ottavo Bottechia murdered by fascists? Was Fiorenzo Magni a violent war criminal? The answers are not clear but that is the role of a historian like Foot who presents evidence and often the lack of evidence to support many claims and “truths” from the past.

The later part of the book discusses the modern era with cynicism. Rightly so given the prevalence of doping and Foot hammers home the role pharmacology and cheating have played in the sport. This might disturb some but Foot is not an insider keen to promote the sport. I would say Foot misses some nuance, for example yes Ivan Basso was banned for doping but today he’s not the “extra-terrestrial” rider from the past, perhaps things do change.

“At that moment, Coppi and Italy became one. They were fused together. A myth of endurance, of a superman in peasant’s clothing, had come into being”

You can sense the appeal of a “golden age” in the past. A time when Italians cycled to work, whether in the factor or field, and when cycling was the talk of the nation, especially with the rivalry between Coppi and Bartali. Foot claims the pair’s duel was the greatest rivalry in the history of all sports and he makes the case well. But today millions commute by car, soccer is the national sport and today a quick scan of the top names in the Giro reveals several riders who have been banned in the past for doping. As such there really was a golden age, it is not a product of nostalgia but demonstrable and even quantifiable.

A criticism of the book is that it is too short. There could be more chapters on other riders, more information on other races beyond the Giro and an explainer on more concepts in Italy. The topic of gregari, the team riders is mentioned and today this tradition lives on with the loyal helpers, especially at Liquigas. Some won’t like the cynical tone about doping but it is understandable and I’ve met countless Italians who shrug and say the sport’s pharmacological farce has put them off.

Summary
A comprehensive and analytical history of Italian cycling. Some books repeat myths but this debunks a few and analyses others. Foot isn’t a cyclist but an academic and he places the sport in a historical context of a new nation looking for idols and shared stories. Many countries have foundations built on myth, history gets adapted to suit tales of heroism and nationalism. But perhaps only Italy has seen cycling intertwined with the creation of the nation and nationhood? Foot expertly covers the sport, analysing the economic forces that made bicycle delivery boys turn professional, the political currents that latched onto superstars and for the modern day, the reasons why the sport has fallen from its top spot.

A solid read even if the evocation of a golden age implies today is tarnished. It’s a book you can probably return to in time to the tales and the references alike. Note the book has an Italian language edition too.

A list of previous book reviews is available at inrng.com/books.