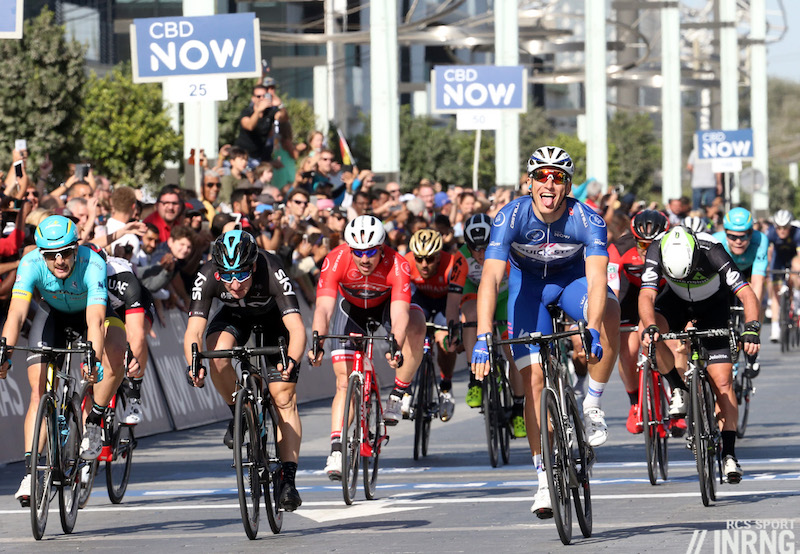 Do early wins matter? A lot aren’t on TV and plenty happen far from a sponsor’s target audience so the publicity value is often minimal. However it’s often said that a good start to the season sets up a team for the rest of the year, building confidence that in turn brings more wins. Similarly a poor start can burden a team for the year. Is this true? It’s possible to use data and statistical analysis to test this so let’s have a look.

This topic was looked at early on last year but only looked at three seasons and when revisiting the data to add the outcome of the 2016 season it still made for a small data set. So the numbers for the past eight seasons have been crunched. How? All World Tour teams had their tally of early season success compared to the wins gained later in the year and these two data sets were checked for any correlation. As a proxy for early season results the cut-off was the end of March: count the race days and this marks almost precisely one quarter of the season’s race days. Here the rankings as scatter graphs for the eight years with the season start to March on the X-axis and April to October on the Y-axis in order to show the working:

What does it mean? The data say the Spearman’s rho for the eight year period is 0.58 which is significant but not strong. Here’s the rho for each season:

As you can see the rho has fallen in recent years. It seems, at least going by the first years on the chart above, that early wins did help some teams keep going but this has dropped in recent years. The average still suggests a weak correlation.

In plain English please: early season success from January to March doesn’t correlate very well with the success rate from April onwards. A good start is nice but there’s not much momentum gained out of it; similarly a bad start needn’t be ruinous for a whole year. 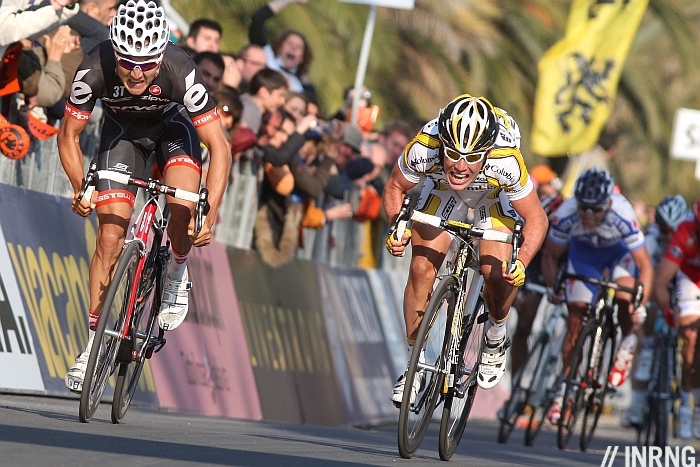 Behind the data: when compiling the data it was obvious that some teams that get off to a winning start do just keep on going all year but not because they get on a roll, more because their roster is racked with riders who win often. The old Highroad team began the 2009 season with 13 wins in the period to the end of March, equal or more to the number of wins that several rival teams would enjoy across the entire season and this is largely because Mark Cavendish, André Greipel and Edvald Boasson Hagen rode for the team and remarkably ended the year as first, second and third in the table of individual winners that year. Similarly the team with the fewest wins all year often scores worst for the opening period too. The story of the data here is often one of mid-table shuffling where a team with a decent start can fade and vice versa.

Anecdote: To illustrate this the biggest swing observed was Ag2r La Mondiale in 2014. They’re a perennial low scorer in terms of wins but in 2014 they enjoyed a great start to with nine wins by the end of March including Carlos Betancur’s Paris-Nice success but only eight more for the rest of the year so their fine start was an aberration rather than the start of something.

In summary a winning team is going to enjoy a great start to the season regardless but those teams who take a few surprise wins early don’t tend to keep up the momentum and those teams without many wins by the end of March are not condemned to a dire season.

World Tour breakaway: one thing that the data don’t show is the changing focus of some teams and the overall increase in strength of the World Tour teams versus the rest during the period observed. Back in 2009 or 2010 it was common for the smaller Pro Conti teams to snap at the heels of the World Tour teams, or even bite chunks out of them. For example in 2009 the Pro Conti Androni team took 33 wins and several second tier teams collected plenty of wins to finish the year well ahead of the World Tour teams. Nowadays the World Tour teams tend to be grouped towards the top of the table leaving few crumbs for the lesser teams, to use an anecdote to illustrate this no wildcard invitees to the Tour de France has won a stage since 2012 when it was frequent before this.

If the data suggest early wins don’t bring momentum then the broader question is whether early wins count for anything more than morale and narratives. It’s questionable whether they bring publicity as quantity and quality are not the same. We might think the goal of a team is to win but really it’s to promote their sponsors and if winning the best way to do this, not all wins are equal. Take an un-televised race with a handful of spectators at the finish line where the results end up buried in a local newspaper and yes, you have a win in statistical terms but the value to the sponsors is minimal. Teams want to win but they’re often measured against expectations rather than victory rankings, Team Sky’s big budget and blue chip corporate sponsorship means they have to win the big races that are on TV in the UK, Italy and Germany because these are the key markets for the sponsor. Put simply Sky needs to win the Tour de France. Meanwhile sales of lottery tickets and scratchcards in France won’t change if FDJ storm the Tour Down Under but a win in the GP La Marseillaise does help the sponsor push its brand in the provinces so each team has its own subtle objectives.

Conclusion
Does a team that starts winning early carry on winning throughout the year? In a word “no” say the data sets mentioned above when tested.

There’s a more nuanced story here though, the answer is “yes” for a team like Quick Step today or HTC-Highroad from the past where wins seem to come easy any month of the year and just as weak teams from the past like Euskaltel or Vacansoleil struggled all the time. But it’s outside of these anecdotes that the data debunks the the hypothesis of a good start leading to a good season.

Previous post: The Rise of Nationalism, The Demise of Races