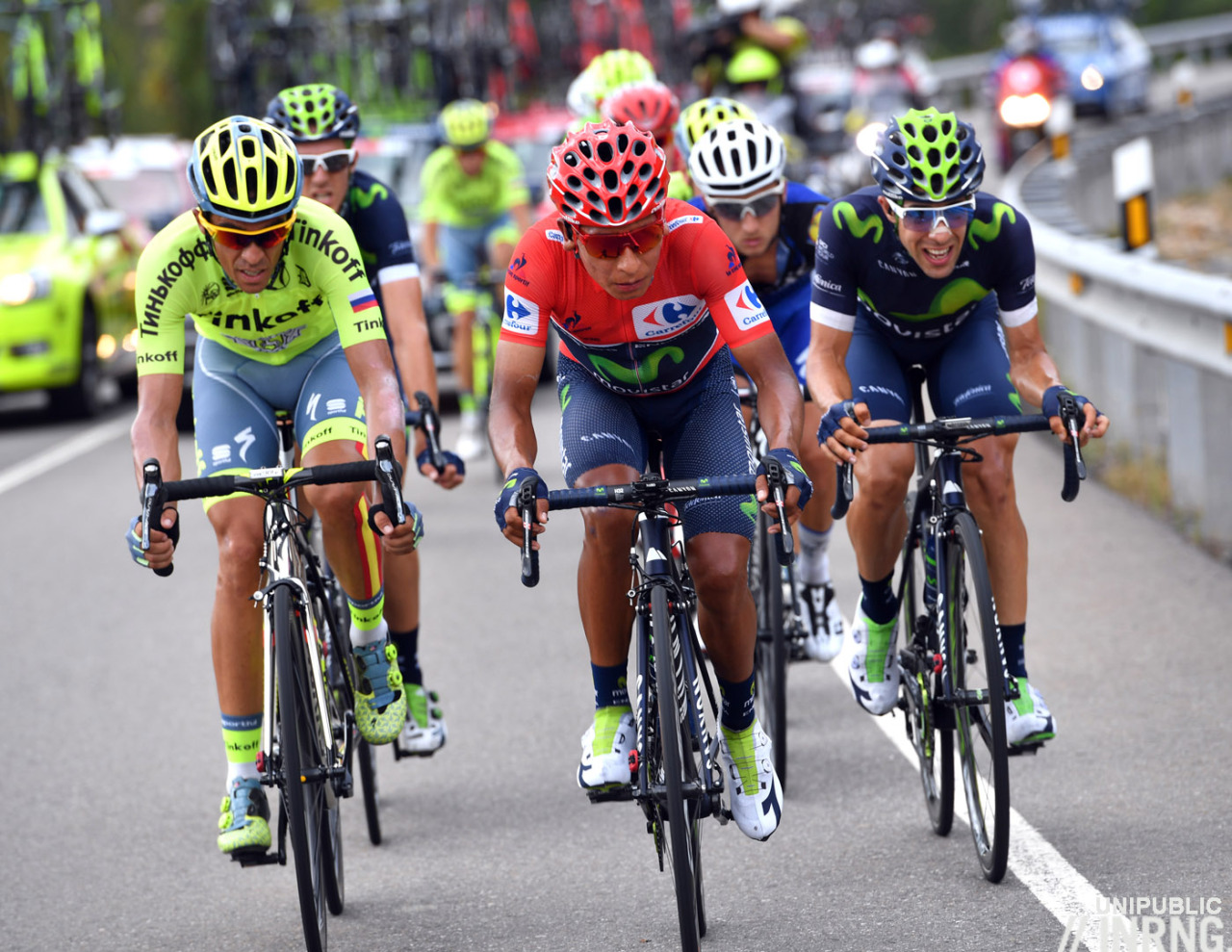 Alberto Contador and Nairo Quintana break away right from the start of Stage 15 and aided by their team mates in the same move caught Team Sky having a siesta. Froome gave chase but quickly ran out of team mates and could only manage to limit his losses as Quintana went up the road and Sky’s plans went up in smoke. This was the moment the race was won.

The race began in Ourense with a win for Team Sky which helped suggest the team were ready but with hindsight they were to fall away, Michał Kwiatkowski abandoned but the biggest problem was with those not in the race, the likes of Mikel Landa and Beñat Intxausti could not ride leaving the team underpowered in the mountains later on.

Sans sprinters: There were no big name sprinters started the race and none finished. In 2012 John Degenkolb went from promising prospect to multiple stage winner; Nacer Bouhanni did the same in the 2014 Giro. It was odd that seeing the startlist no team drafted in a sprinter if only for the first week but it delighted Etixx-Quickstep who took two stages with Gianni Meersman who’s joining Fortuneo-Vital Concept, a step down in terms of team but upwards when it comes to opportunities as he’ll be a regular pick.

Darwin Atapuma took over the red jersey. It’s easy to stereotype Colombians as climbers but Atampuma is the archetype with his light build and yo-yo style but this meant his chances of holding onto the overall lead were slim, he’s great at darting attacks but less so when it comes to grinding out the results. His riding saved the race for BMC Racing, Ben Hermans tried hard while Tejay van Garderen quietly went missing despite promising a different approach. 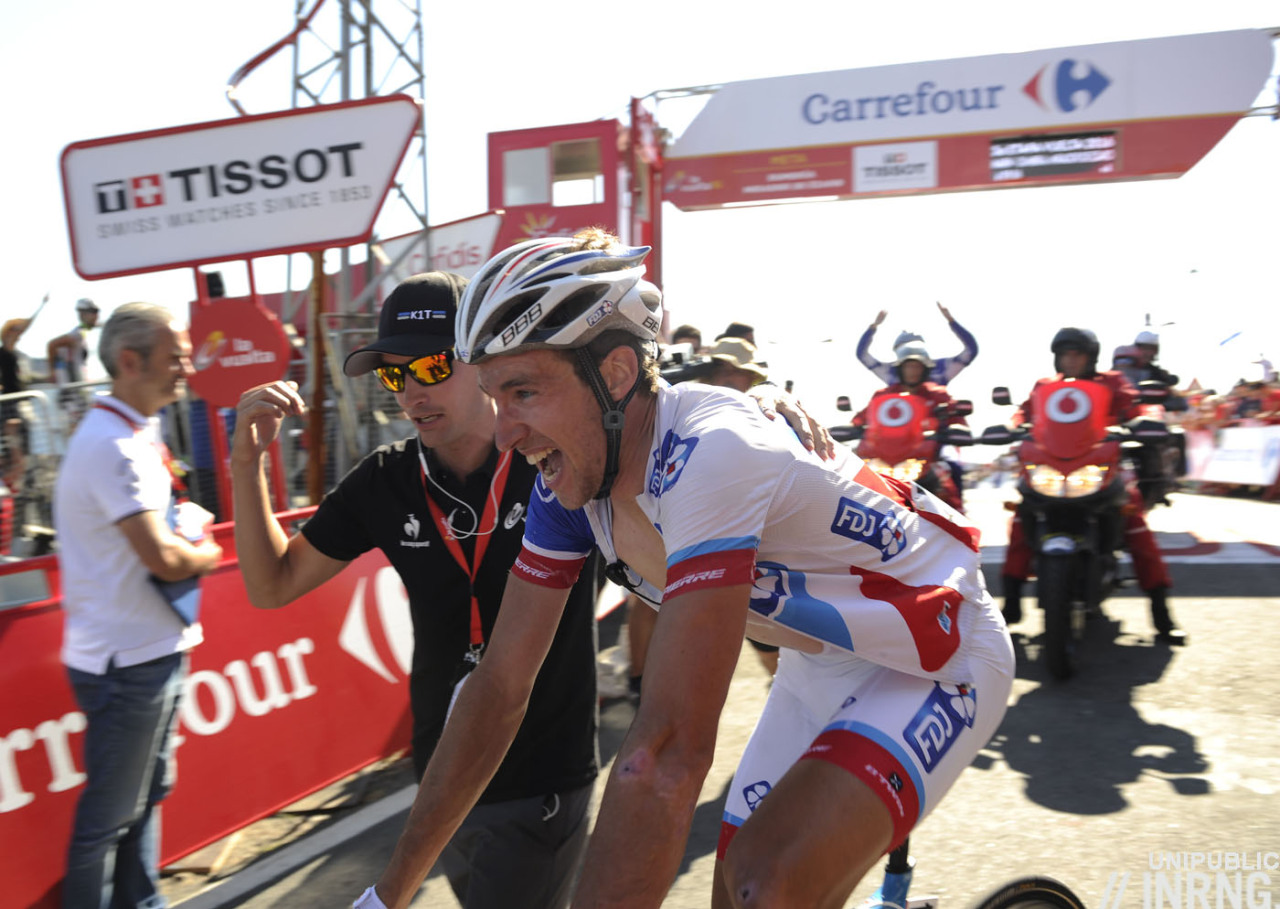 Tapas TV: The race promised a lot of uphill finishes. This was tapas television, bite-sized stage finishes where the action was served up for the final minutes of every day. It means hours of live coverage seem excessive as the peloton pedals past the plains to the daily rendez-vous with gravity but does ensure compelling action on an almost daily basis. The danger is repeat episodes, that once we’ve discovered the W/kg ratios of the contenders then each uphill finish becomes a mere reiteration. Not this time, the ever-changing fortunes of the riders which meant the regular uphill finishes never quite felt like repeat episodes. If Froome was overtaken by Contador and Quintana on La Camperona then the tables would turn on other summit finishes and Froome’s tactics varied, willing to attack some days but at othertimes – Ezaro, Covadonga – he rode up the climb at his own pace, dropped at first before deploying a rotary frenzy to winch himself back to the front group. 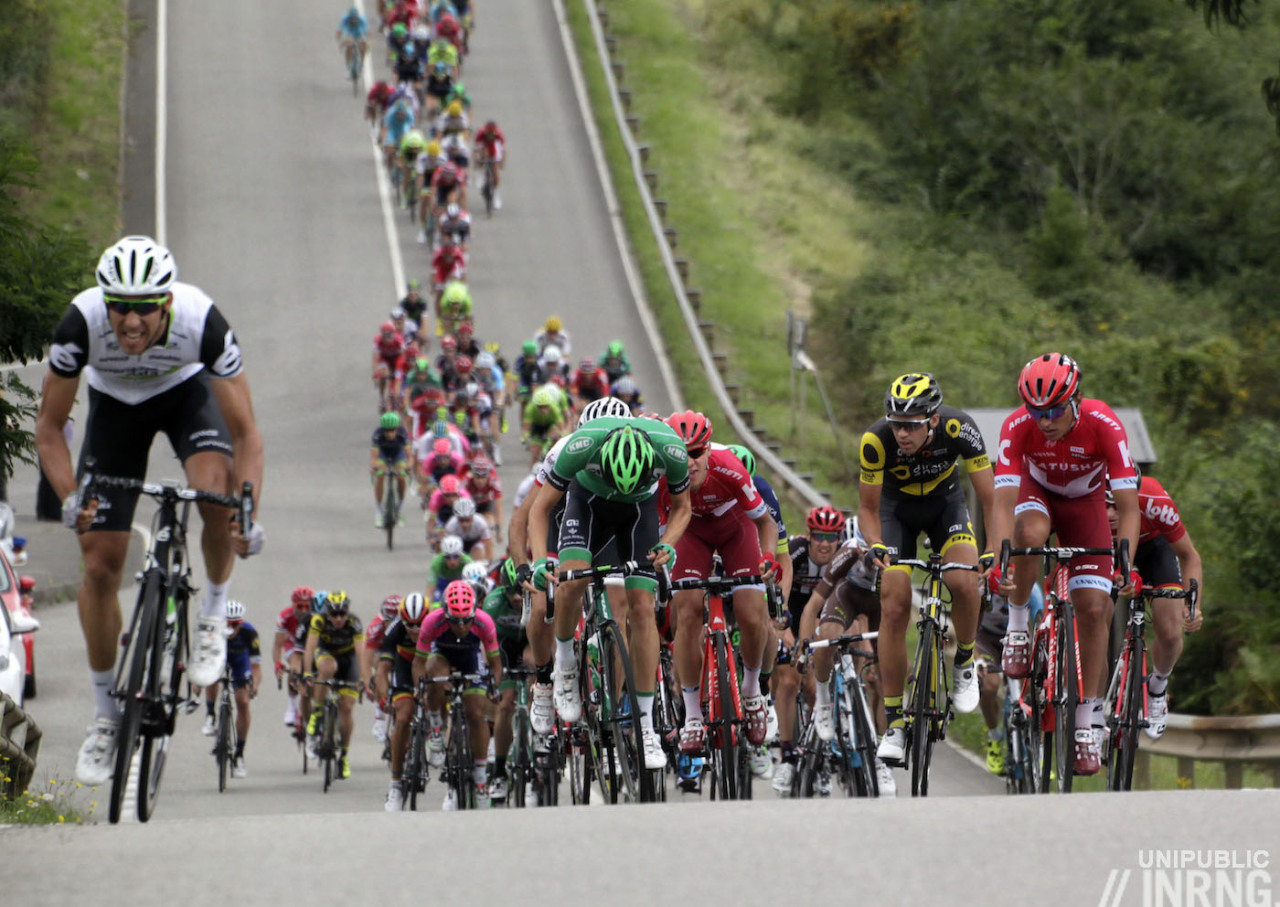 Breakaway bonanza: One unseen aspect was the daily battle to get in the breakaway. The course, the lack of big teams and more meant the race rewarded the attackers as seen from the start with Alex Geniez. In total half of the stages went to riders from an early breakaway, as much as the Giro and Tour combined. The riders knew it and many stages had furious starts, something that wasn’t seen on TV but showed up in fatigue and a big factor behind the claims among many that this was the hardest grand tour of the year. The accumulated fatigue would lead to a mini polemic later on as 91 riders, over half the field, came in well outside the time limit. The UCI rule was waived and the riders were kept in; the rule used to have a “safety in numbers” clause which gave discretion to the commissaire to retain riders if the gruppetto was 20% or more of the field but this has been dropped but the race could not go on with so few riders so it looks like it still exists. Once again the UCI rulebook resembles an à la carte menu where commercial imperatives inform decisions as much as the rules. 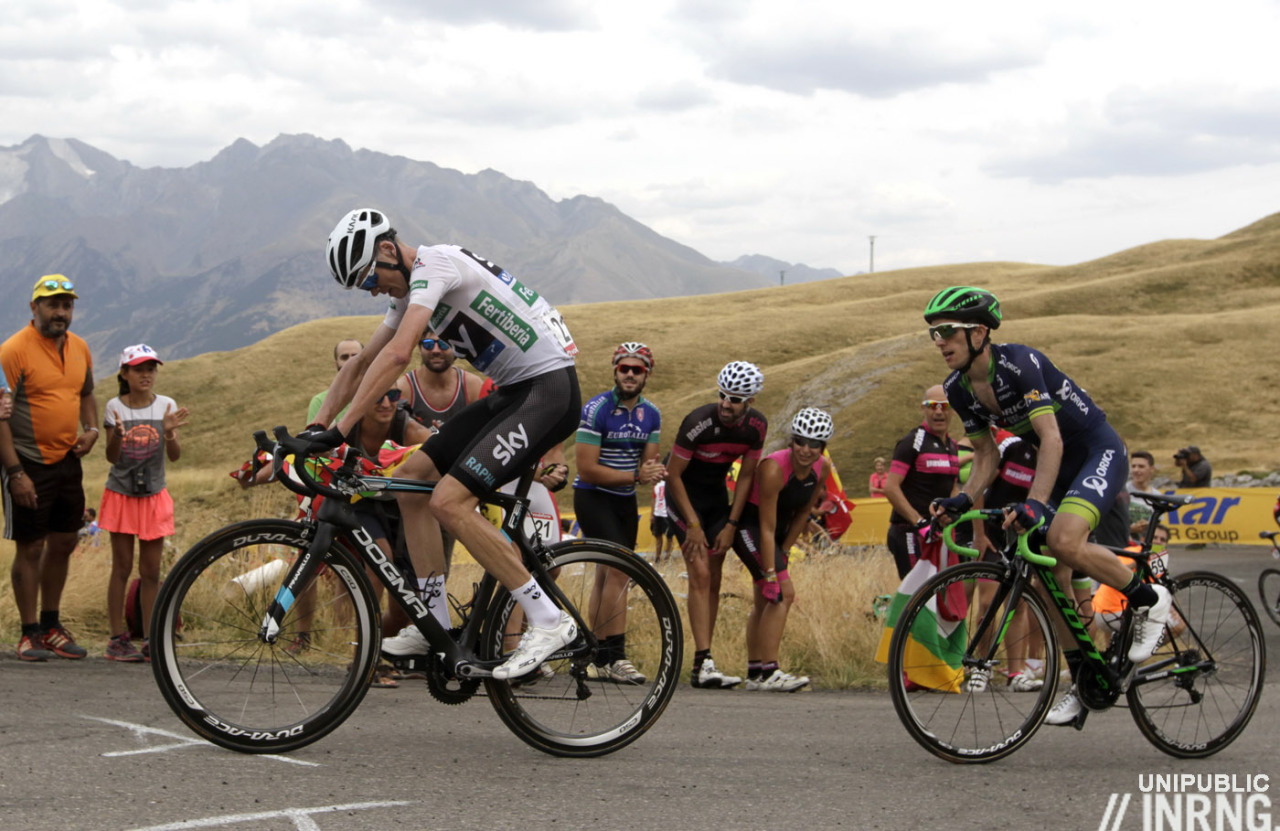 Froomigal: Stage 14 is a contender for one of the seasons’s highlights. The trip to France saw Orica-BikeExchange turn the race upside down with Simon Yates going on a long range move while behind Contador tried an attack but paid for it and the day finished with Froome and Quintana ahead of the rest and Alejandro Valverde’s overall hopes were buried. As good as this was the next day was going to be better but the weekend has to be seen in the whole, a gruelling day chased by an intense stage.  If the battle to get into the breakaway was often unseen, the one time it was shown live on TV from start to finish was the next day and Stage 15 to the Aramón Formiga ski resort. Only this time Team Sky, sponsored by a broadcaster, didn’t see what was happening. Gianluca Brambilla attacked right at the start and was joined by Contador, Quintana and their team mates and in no time the move started to take time. Behind things went wild as the chase split in two with Chris Froome having only two team mates with him and behind his team were chasing to get back to the Froome group… which was being driven by Froome’s team mates in pursuit of Quintana and Contador. This was Contador on the attack again, perhaps his status as having won every stage race he wants means he can afford to take risks; not for him a discreet top-10 and banking the ranking points. Or perhaps he cannot manage in a mano a mano contest any more? Either way once again he’s the catalytic agent that starts the chain reaction of wild racing.

Quintana might have mugged Froome but he didn’t run away with the race. The Calpe time trial stage allowed Froome to close in to just 1m21s, close enough to entertain the promise of a showdown on the final climb on the final Saturday of the race. In the end Nairo Quintana matched everything Froome could throw at him.

The Tour that wasn’t: the suspense lasted until the final climb as Froome tried a flurry of attacks and the other jerseys changed shoulders as Omar Fraile took the mountains competition from Kenny Elissonde and and Fabio Felline won the points competition ahead of Alejandro Valverde. This was Vuelta delivering everything the Tour didn’t and the race concludes without some wondering how to make structural changes to re-engineer the sport, there’s no debating team sizes and salary caps. Revelación: if you’ve landed on a niche cycling blog then the likes of Pierre Latour and Valerio Conti are no strangers to loyal readers, but all the same they impressed. Lilian Calmejane showed us he’s one of Direct Energie’s big prospects and provided one of the few moments when a wildcard team managed to shine (Cofidis were less dependable than the roadside hoardings bearing their name). Magnus Cort Nielsen finally broke through, he was brilliant as a 21 year old in the Conti ranks but it’s taken time for him to start winning at the higher level and now it’s happening and with Michael Matthews leaving Orica-BikeExchange the team have a capable understudy even if the role won’t be reprised so often now that the team is tilting to the stage races. As well as new names some older ones finally got there chance. For years Robert Gesink was the bicycling incarnation of Albert King’s blues lyrics “if it wasn’t for bad luck, I wouldn’t have no luck at all” but he got his stage and didn’t even need to get lucky and he just rode past everyone. Jens Keukeleire, Sergey Lagutin, Alexandre Geniez, Mathias Frank had their stage wins with Frank leading IAM Cyling’s Indian summer of success. Often the Vuelta is a last chance job interview but few of the cast of characters seem in dire straits as suddenly 18 teams are aiming for 17 World Tour places. A stage win alone won’t bring the points needed but it does make the rider in question a hot prospect as the Chinese-Lampre project competes with Bahrain-Merida to built a capable roster. ¿The pain in Spain?: Spain hasn’t been able to form government for nine months but if the Vuelta was going to be light relief it didn’t provide too much of a distraction for local hopes. Sometimes the home riders struggled to form a breakaway. Stage 13 stands out, a breakaway of 12 riders but not one Spaniard among them despite a stage in the Basque Country. Caja Rural never set the race on fire. It wasn’t blank, David de la Cruz took a stage, Ruben Fernandez had a day in red and Omar Fraile won the points jersey. Contador had a weak team and Alejandro Valverde was a big help for Nairo Quintana but the next generation is taking time to emerge. Orica-Change: as some teams try to cobble together a roster they’d do well to look around. The Greenedge team began life as collection of sprinters and time triallists and is now heading towards a team of stage racers. There’s a sense to this, or at least a story of a team that took Australian riders off a track programme conveyor belt in the same way Sky recruits today and how this brought easier wins but now they’re aiming for more and the harder struggles of grand tour success. Can Esteban Chaves and the Yates brothers win big? In a word yes, if Chaves can finish on the podium of the Giro and Vuelta then he could climb a step while the Yates continue their progress. Best of all it’s entertaining to watch, this is a team of risk-takers that send Simon Yates solo over the Marie-Blanque and Esteban Chaves won his podium place with a bold, long range attack. Perhaps this looked more risky than it was given Alberto Contador always looked a sprocket off the pace on the final climbs and never had a strong team so once Chaves got a gap Contador had little help to close it. 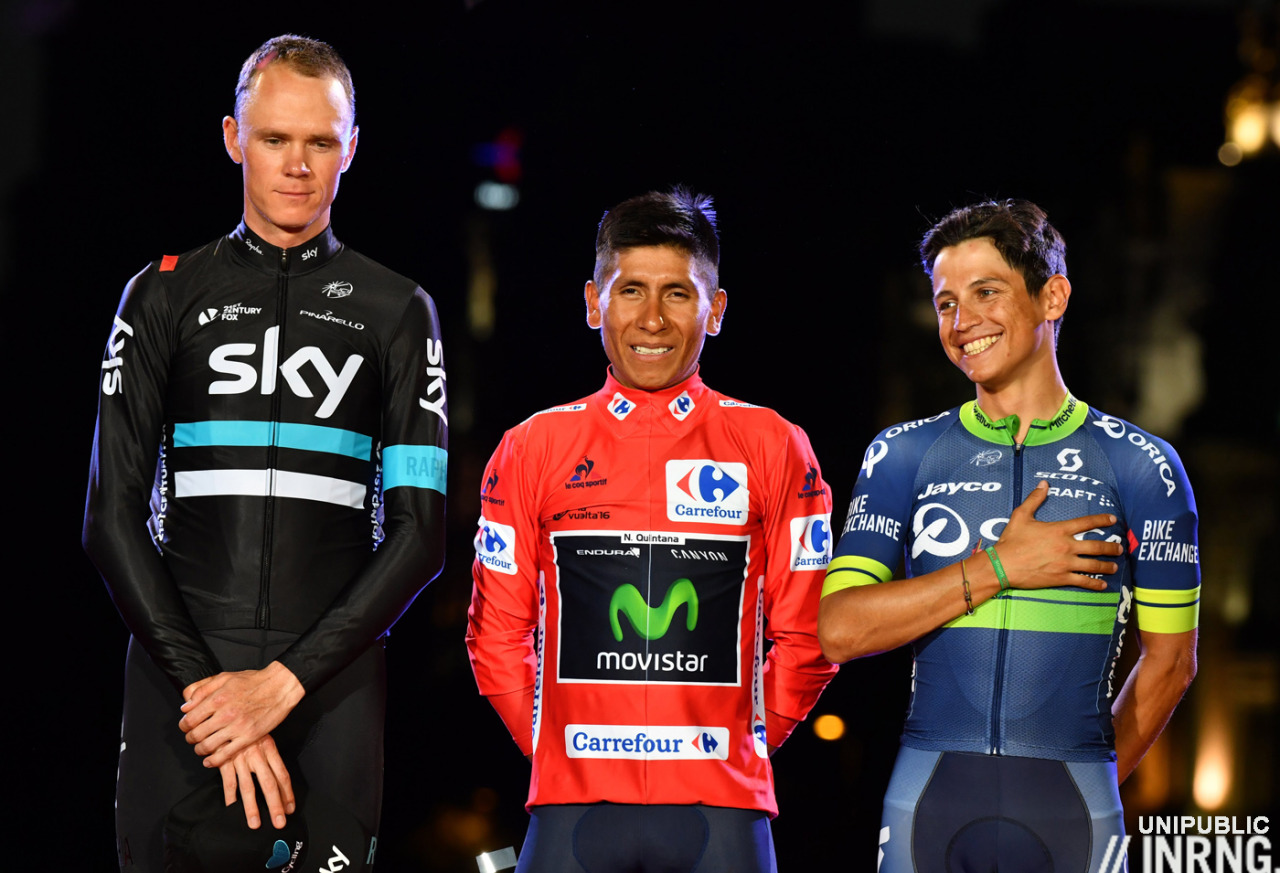 The Verdict: a lively race that provided action on a daily basis. At times the contest was reserved for the final minutes of a stage and if this sometimes felt superficial then the big weekend in the Pyrenees made up for it all. We had tactical sophistication, long range moves, risk and surprise that makes for great racing.

Nairo Quintana won the race and his win is boosted by beating Chris Froome whose own efforts enhanced the race, the Tour de France winner gets his third second place. Esteban Chaves adds to the podium and remains an exciting prospect but grinding out a win is going to be his challenge for 2017. The rest of the top-10 seems to have happened back stage with the likes of Andrew Talansky riding into a fifth place often unseen by the TV cameras, a triumph of consistency, a similar story for Dani Moreno and Davide Formolo while Simon Yates, David de la Cruz and George Bennett were more visible but only just; we missed crash victims Miguel Lopez and Steven Kruijswijk. The race itself was a winner, it will have earn fans and the 2017 edition is already something to look forward to. 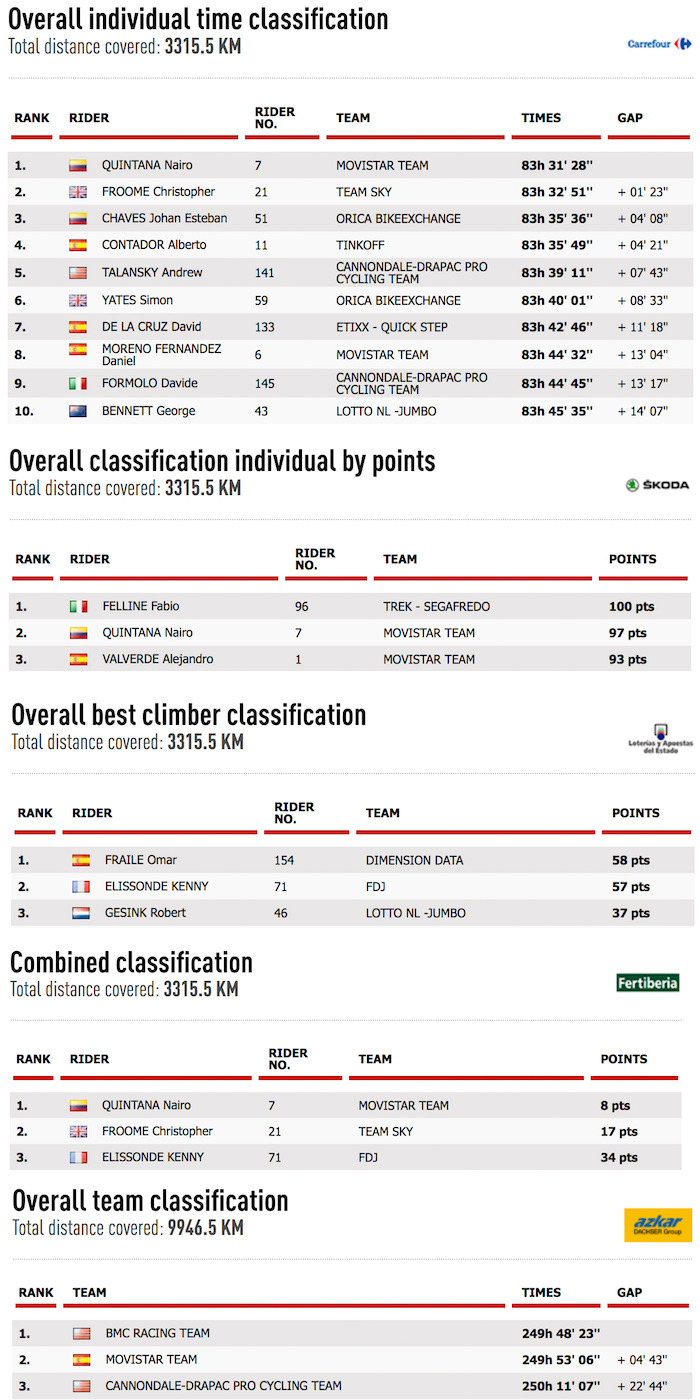