Today’s finish has cobbles, flagstones and an uphill finish. A touch of spice but probably a day for the sprinters before tomorrow and the first summit finish of the race. 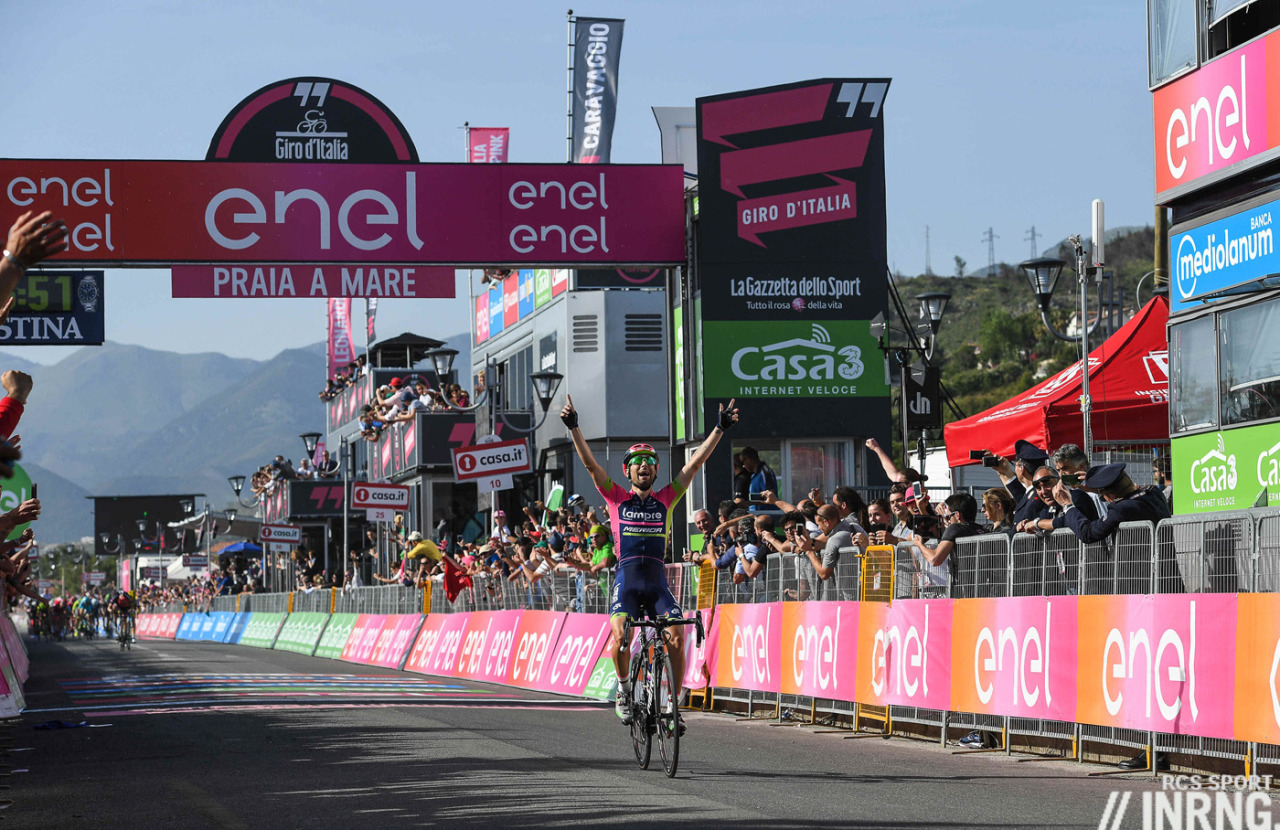 Stage 4 Wrap: Diego Ulissi has had his ups and downs. The deepest downer has to be his anti-doping suspension, a ninth month ban for a large dose of anti-asthma drug salbutamol. We’ll never know if he was injecting it or had too many puffs on the inhaler (nine puffs on a Ventolin inhaler can send you beyond the WADA limit claims a study) but it’s a stain on his CV and not helped by his association with Michele Bartoli. His ups invariably come on the roads, this time on the steep Via Fortino. As a punchy climber he’s taken four stages of the Giro already and now gets Lampre-Merida’s fifth win of the year. He took off on the final climb and just held off the chasers.

The stage had more than its share of action after a fast start. A move went clear but Nippo-Vini Fantini missed it and they were forced into a punishment chase to bring it back. Later on a series of moves flew and eventually a group formed including Ulissi and crucially his team mate Valerio Conti. Conti did a lot of work to keep the move going, toiling on the front to try and tow the group clear of a chase led by Movistar. Conti is 23 and a fuoriclasse, whispered to be tipped for the top. He’s from Rome which is rare given the paucity of cyclists to be found south of Tuscany, indeed it was in the central Italian region that he raced as an amateur with the Mastromarco team… as did Vincenzo Nibali too. Conti’s from a cycling family, his grandfather Noé rode in the service of Fausto Coppi. 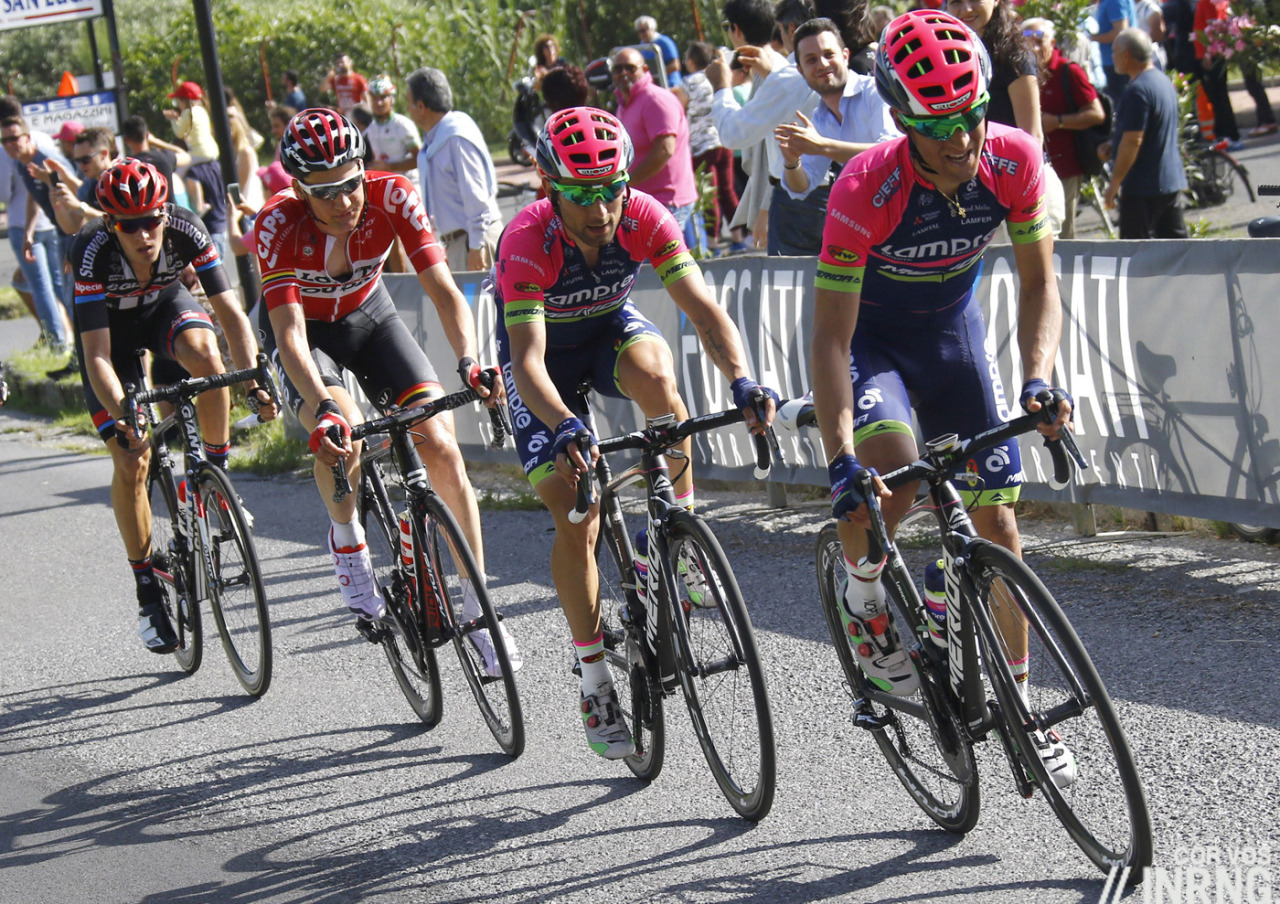 Ulissi held off the chase, just as Tom Dumoulin and Steven Kruijswijk came in ahead of the bunch. Some say Dumoulin’s ambitions go beyond a good opening week but surely if he wanted to win the Giro outright he’d be shepherding his energies right now? Domenico Pozzovivo’s attack on the final climb lit things up and cost the likes of Andrey Amador time while Mikel Landa had a scare but work by Nico Roche got the Basque back.

The Route: up and down but with gradual climbs. The race continues north and reaches Campania and the region around Naples. The early marked climb is an incentive for a breakaway although the 3rd category label offers meagre rewards. Later on the profile may look hilly but most of the time the climbs are gradual and long and on large, wide, straight roads, some of which are the Via Appia, the ancient Roman road. Later on in the stage things get more modern as the road takes tunnels rather than scaling the hills.

The Finish: one lap of a 6.6km circuit around Benevento. The riders turn onto the circuit just at the 1km to go banner and pass the finish line to hear the bell ringing before a lap around the backstreets of the town. As the profile shows the finish is uphill to the line and it’s cobbled. With 1km to go the road has smooth urban pavé which gives way to tarmac and then comes a section of big polished flagstones which are hard to sprint on out of the saddle, these end then there’s more tarmac before the race takes a paved pedestrian shopping street to the line. It might not show up on TV but the town has plenty of historical buildings.

The Contenders: if Marcel Kittel most certainly couldn’t hang on yesterday then he and the other sprinters will be all the more rested for today. The uphill finish isn’t ideal but he’s won races on steeper rides, say a stage of Paris-Nice in 2013.

André Greipel is solid in uphill finishes too but his problem is that if he is in contention for the finish then surely so is Kittel and the opening stages suggest Kittel is simply lengths ahead of the rest. 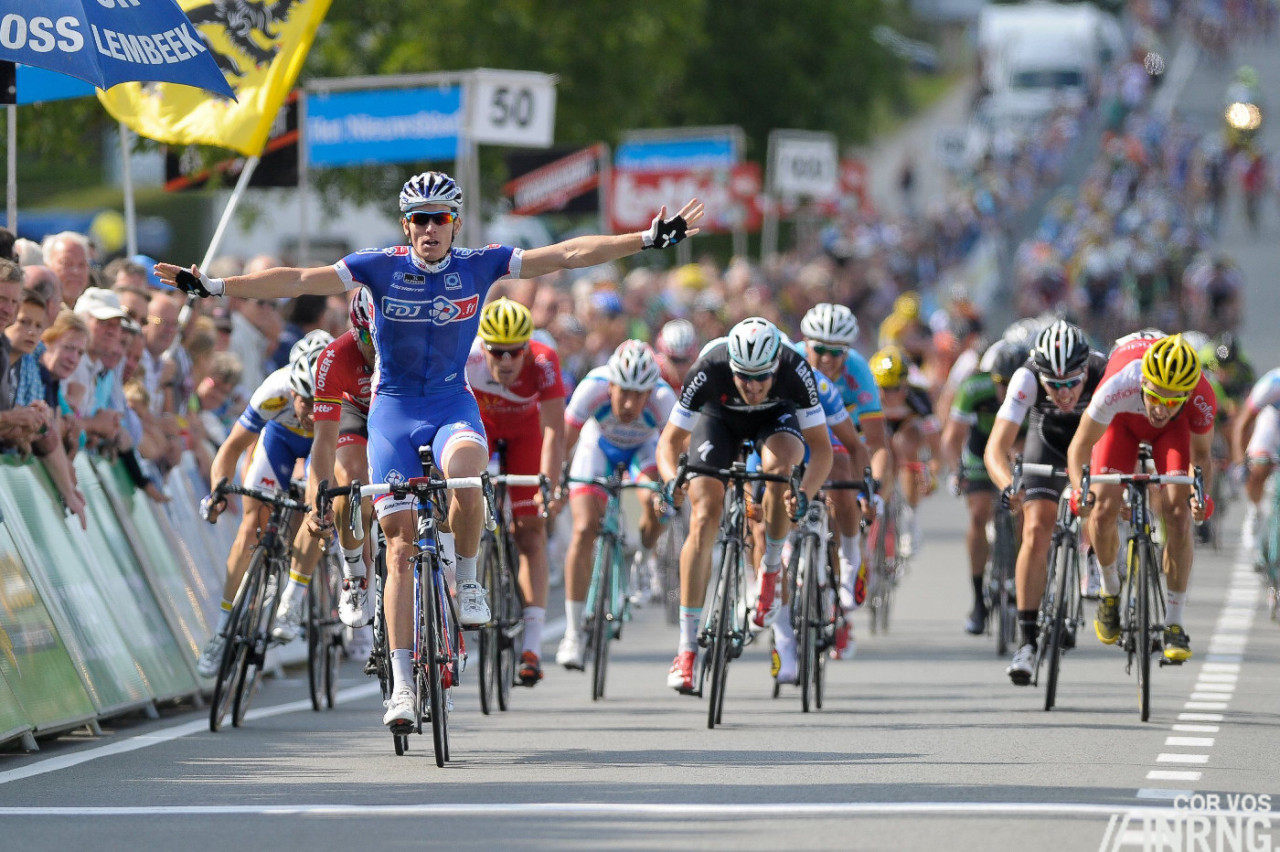 Arnaud Démare is another rider who excels in an uphill sprint, the FDJ rider has won a stage in the Tour de Suisse in an uphill finish ahead of Matt Goss back in the days when Goss was world class and also taken the hilly Halle-Ingoigem classic (pictured) among other runs to the line. An uphill finish? Caleb Ewan won one in the Vuelta but before you rush to the bookmakers the rough finish with its flagstones could be tricky for someone who sprints with so much weight over the front of the bike, his rear wheel could easily lose traction as the bikes bounce over the stones. Plus he’s yet to look convincing, he didn’t crack the top-5 in the Netherlands and was getting chopped off the good wheels by his rivals.

Yesterday’s stage though leaves a question mark hanging over predictions like some Damoclean thread. If things were ripped up yesterday then what about a breakaway today? There is a good chance but the steady roads still suit a sprint stage and Giant-Alpecin will help defend Dumoulin’s chances before Etixx-Quickstep take over.

Weather: sunny and warm to start but the rising temperatures could prompt the clouds to build and a rain shower is possible. A top temperature of 26°C and still.

TV: the finish is forecast for 5.15pm Euro time. If you have to ration your Giro viewing then today’s stage is one to tune in late with a likely sprint finish but as yesterday’s stage showed, check online what’s happening just in case the race is split to pieces.