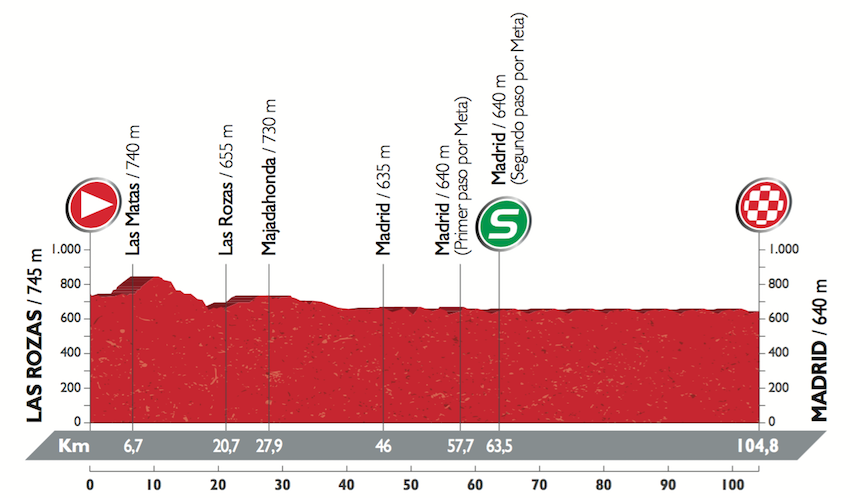 The traditional parade into Madrid to crown the winner and offer a last sprint finish for those who’ve stayed the course. The finish is later than usual. Stage 20 Wrap: a win for Ag2r La Mondiale’s Pierre Latour. With hindsight the climb suited him, he’s a forceful rider but still said to be a touch too heavy which was why the relatively easier gradients 5-8%, compared to the 15-30% slopes seen along the way, suited him. The team say on the quiet he’s the next Bardet but only in the sense he’s the next brown-shorted stage race hope because the pair are very different, Bardet the perfectionist vs Latour the rough diamond. Behind Esteban Chaves climbed back on to the podium thanks to an attack on the penultimate climb, some 45km from the finish. Bold? Yes but rational too given Alberto Contador was isolated, his Tinkoff team no where in sight and Chaves proved he was the superior climber supported by a stronger and more enterprising team. Chris Froome tried a flurry of attacks but Quintana remained as stoic as ever, the same patient expression visible whether he’s floundering in July or soaring in September. The Route: just 104km and they only manage this by riding the “wrong” way out of Las Rozas before eventually turning back to Madrid and then they’ll start the capital’s circuit passing the finish line before the bell rings for the last lap of the last grand tour of the year. It’s a big wide boulevard circuit.

The Contenders: Nikias Arndt might be the fastest in a dragstrip sprint but keeps getting beaten but here is an ideal finish for him. Magnus Cort Nielsen has a stage win to his name but has been a more versatile rider than a pure sprinter and perhaps team mate Jens Keukeleire gets a chance again. Stage winners Gianni Meersman and Jonas Van Genechten are still in the race with the former being a sharper rider and the latter having more power for a finish.

Weather: warm into the evening with a top temperature of 29°C.

TV: the finish is forecast for 8.20pm Euro time. It’s on Eurosport and you can rely on Cyclingfans and steephill.tv for links to feeds and streams.

Madrid Challenge: the Women’s World Tour race the Madrid challenge is on the finishing circuit, an 87km race and finishes at 4.40pm Euro time.