The Vuelta doesn’t have many mythical climbs, there’s no Ventoux nor Stelvio but the Lagos de Covadonga are the closest the race gets, a climb that’s been a regular since the 1980s and climbed for the 20th time today. Stage 9 Wrap: David de la Cruz won the stage after surging past Dries Devenyns late on the climb of the Alto de Naranco. Riders often look happy on the podium – although Thomas de Gendt managed to collect the mountains jersey without barely smile – but de la Cruz was beaming on the podium like a boy who’d just been given a dog for Christmas, kissing the red jersey and giving Esteban Chaves’ smile a challenge.

Behind the main contenders marked each other, happy to wait for tomorrow’s stage and if Nairo Quintana lost the overall lead he’ll probably be pleased about it as it means Etixx-Quickstep have to do some work tomorrow instead of his Movistar team. Still if all the contenders finished on the same time Alejandro Valverde looked lively as he chased down local rider Samuel Sanchez and the others took a moment to react.

The Route: 188km. A start in Lugones and after the sporty town of Gijón the race follows the coast until the the halfway point at Ribadesella where the race begins a circuit and climbs to the Mirador del Fito, 6.2km at 7.8% average and with 10% ramps along the way. 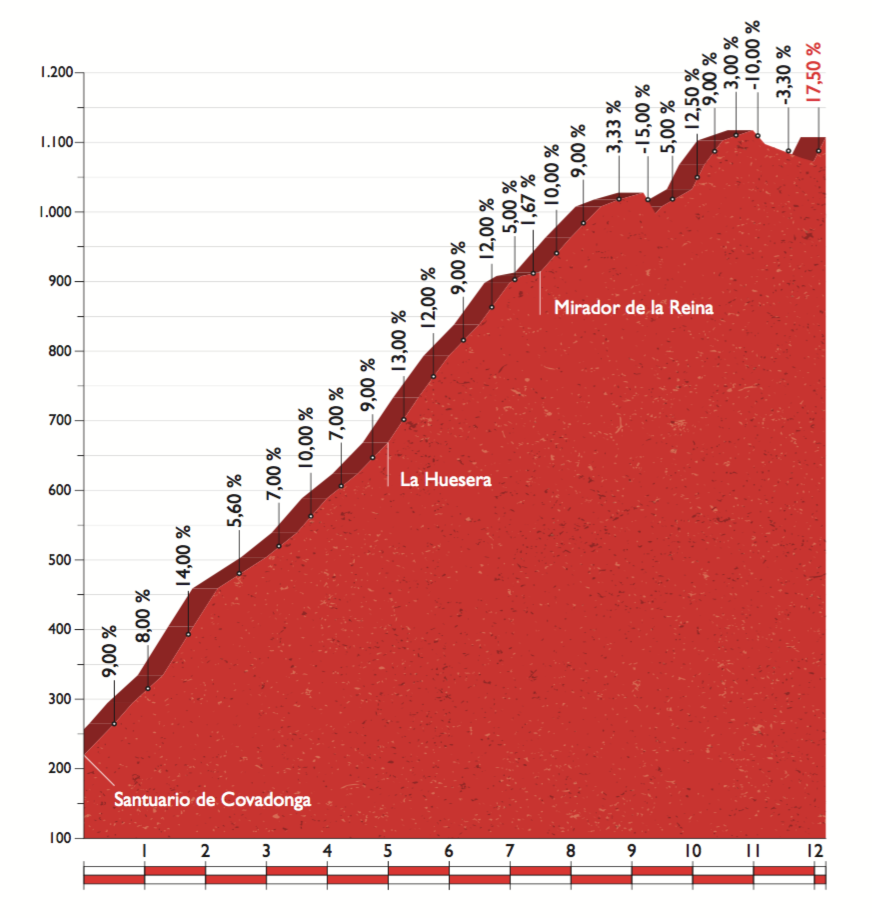 The Finish: the climb should be familiar to readers and riders alike as a staple of the Vuelta. It’s 12.km long at 7.2% average but a very irregular climb with constantly changing gradients, a staircase climb. The chart says 17.5% at the finish but this looks odd, after the descent by the lakes the road rises and it’s not so steep.

The Contenders: Nairo Quintana was the surprise on La Camperona, attacking and then pulling away but it’s still hard to tell who is the best because no sooner does one rider look good they have a reversal on the next mountain stage. Still Quintana and Alejandro Valverde look like the ideal pairing for this stage finish, Quintana can go on the climb proper while Valverde can mark and then use the small uphill ramp to the line to sprint.

Chris Froome has beaten expectations so far with consistent riding even if he’s not the force we saw in July. A stage win here is possible but the uneven climb and the flat portion across the top might not suit. The same for Alberto Contador who surged past Froome two days ago despite being swaddled in bandages but if Contador could do that with his limbs and shoulders resembling a pizza margherita then imagine what a couple of extra days of recovery can do.

Esteban Chaves needs a result. He looked fresh on the Ezaro climb but suffered on La Camperona and can’t afford any more time losses here because he’s behind Quintana, Valverde and Froome overall and they’re all superior in the time trial. If he’s going backwards here then even a podium finish is going to be a challenge. Simon Yates has been erratic but could be close too.

Caja Rural’s Sergio Pardilla is climbing well and is almost four minutes down overall so could have room to go clear.

Can a breakaway stick? Normally no but this Vuelta isn’t ordinary and many moves are staying away so expect lively competition to go clear. Cannondale’s GC hopes have gone so Joe Dombrowski could try from a breakaway,

Weather: sunshine and clouds with a chance of rain, cool with top temperature of 21°C