What’s the most famous climb in the Vuelta? The race climbed up to the Lagos de Covadonga yesterday – pictured – but arguably the most well-known climb in this year’s edition is… the Col d’Aubisque, used when the Vuelta slips into France for a day.

It’s telling that a foreign climb grabs the limelight, as good as the Vuelta can be when compared to the Tour de France and Giro d’Italia one big missing item is a repertoire of mythical climbs.

It’s not that Spain is flat, nor its mountains uncharted, there are some famous climbs. Last weekend’s Alto de Naranco, the Lagos de Covadonga, the Angliru, the Bola del Mundo are all examples but they’re not in the pantheon alongside the Tourmalet, Galibier, Stelvio, Gavia, Mont Ventoux or Alpe d’Huez.

What has made the climbs so famous? Repetition for a start, regular visits by the the Tour and Giro which have both being going for longer since the Vuelta means the Tourmalet and Galibier enjoy a big head start. Repeat visits increase the chance of important moments in the race taking place, not every ascent of Alpe d’Huez or Mont Ventoux has defined the race but some have and so they’ve become famous thanks to the exploits of Fausto Coppi. The Puy-de-Dôme is still famous despite the climb being closed to cyclists and impractical for the Tour de France. History plays a part, there many books chronicling the Tour and Giro but there are far fewer on the Vuelta (if you want one in English, look at Viva la Vuelta). There can be other factors, proximity is one for the way it’s possible for fans to ride one big climb and then another on the same day whereas the Vuelta’s famous climbs are not packed next to each other which brings us to the business of tourism. The Alps are a big tourist destination in summer and winter alike in the way the Asturias or Sierra Nevada are not, which means there’s more money for local authorities to buy a stage of the race.

There’s a sense of place too, history means that the climbs alone are not famous but the approach roads, valleys and associated climbs are too in a way that even the most ardent cycling fans outside of Spain probably can’t rattle off five attractive climbs within the vicinity of La Camperona.

Does it matter? There are plenty of great climbs that are not famous but there’s something to said for familiar climbs. It’s like a form of branding, everyone knows what they’re going to get, a comforting sense of familiarity for followers. They say “familiarity breeds contempt” but Tour and Giro are only once a year so even the Tourmalet isn’t too boring. All together these famous climbs are a valuable cultural capital. 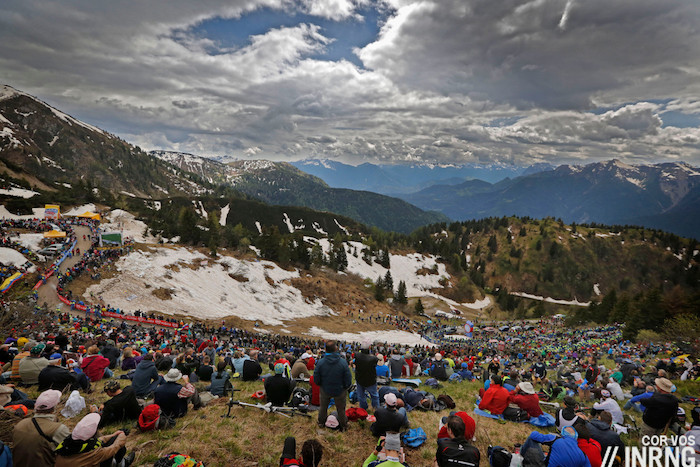 Monte Zoncolan, proof that famous and fearsome summit finishes can be created overnight

The good news for the Vuelta is that it doesn’t take too long to create a famous climb. Alpe d’Huez was first used in the Tour in 1952 but it was really repeated use from 1976 onwards that put it on the map and it probably established itself as a cycling destination in the late 80s helped by La Marmotte, the world’s first cyclosportif event. Or just look to Italy where the Giro has showered celebrity on the Mortirolo and Monte Zoncolan in no time, they first used in 1990 and 2003. Arguably this is what we’re seeing now with climbs like the Lagos de Covadonga (first introduced in 1983), Angliru (1999), Bola del Mundo (2010) and La Camperona (2014). There’s another similarity with the Mortirolo and Zoncolan in that the newer the addition, the fierce the climb as races seek out savage slopes to tempt TV audiences.

Conclusion
The most famous mountain in Spain among cyclists? Mount Teide probably gets more mentions as a training venue than many of the raced climbs. This is changing though as the Vuelta seems to be returning regularly to the same climbs. The Vuelta’s French takeover back in 2008 has been credited by some for a shake-up in the race and it’s true that the addition of some new climbs dates from this deal but it could just be coincidental; these steep and decisive mountains are good for TV audiences and ensure a winner who will be acclaimed by the public. It’ll take a while before convoys of Dutch cyclists head to the Angliru in the same way the aim for Mont Ventoux but the more familiar the climbs of Spain become the more they’ll become a riding destination and this virtuous cycle will reinforce the celebrity of these mountain roads.