Sprint or breakaway? Today’s stage is accessible to the sprinters but it’ll depend on their teams and their ambitions and whether they can wrestle with the many breakaway hopefuls who’ll want to pick off the stage, the last non-Alpine opportunity before Paris. Many others will fancy their chances in a breakaway. A spicy finish in the Swiss capital awaits with climbs and cobbles before the finish line.

Stage 15 Wrap: mid-mountain stages are often promising on paper, disappointing in reality but yesterday’s Jurassic jaunt delivered plenty with a 28 rider group surging clear on the first climb of the Col du Berthiand after earlier moves had failed, including one Thomas De Gendt who made what the French call une attaque boomerang as he surged forward and then seemed to come straight back. This would cost him his polka dot jersey.

Tom Dumoulin and Vincenzo Nibali were among the first to stir as the race approached the Grand Colombier but their early moves cost them by the time the main climb came and Ilnur Zakarin and Rafał Majka were among the strongest. As the two crested the top Julian Alaphilippe was chasing and so was Jarlinson Pantano and Séb Reichenbach. The latter pair used their skills to close the gap on the descent until Alaphilippe had a mechanical near the end of the descent and he was ruled out of the stage. Majka and Pantano stayed clear for the first passage across the finish line but this presented Majka with a problem given the Colombian is a much faster finisher. Majka attacked twice and went clear through the scenic “lacets” section of the climb but Pantano kept plugging away and was joined by Reichenbach and then Pantano put his descending skills to work once again to catch Majka. The Pole looked nervous in the finish and as much as the tried to manoevre Pantano the outcome seemed inevitable. Jarlinson Pantano is a Swiss knife, he can climb, descend and he can sprint and he duly won the stage. With IAM Cycling ending he was assured of a job given his talents but after his victory in the Tour de Suisse and now this his value is soaring.

Behind the GC battle was quiet. In the words of Cyrille Guimard on RMC Radio “there was Wout Poels and there were all the others“. The Dutchman quickly reeled in attacks by Fabio Aru, Alejandro Valverde. It took more time to get Romain Bardet back but Poels just got him before the descent. Froome was “only” left with Poels as they rode into the finish but only after Mikel Nieve had crashed and Geraint Thomas had punctured. It was proof rivals wanted to attack but those that dared were boomerangs. Froome even briefly feinted an attack to see who was watching him. In the meantime Adam Yates appeared to be holding on by his fingernails and Tejay van Garderen was dropped and slipped two places down the GC.

The Route: 209km out of the Jura and over 2,000m of vertical gain. The start is in the middle of nowhere and all the better for it, Moirans – population 2,227 – is a charming village in the Jura, a corner of France that merits being on map of every cyclist.

The roads rises and fall a lot along the way but without particular difficulty. The sole marked climb of the day is the road to Mühleberg, 1.2km at 5% so nothing to worry the sprinters.

The Finish: an urban finish in Bern with plenty of plot twists in the shape of tight bends, climbs, descents and cobbles as they cross the Matte, the old town of Bern.

With 2.4km to go they go under the Nydeggbrücke bridge they’ll take in a moment and begin a cobbled climb that curves up and ends with a sharp 180° bend at the top and the cobbles continue as they cross the Nydeggbrücke. These are urban pavé but rough enough to rattle bikes and rob speed.

With 1.8km they swing left and start the climb up Aargauerstalden. It is listed as 600m at 6.5% but measured at 560m at 7.5%. This is not what the sprinters want but at least they’ll be grateful it’s on a big road that curves gently so they can get in the slipstream. The final kilometre is flat and straight before the finish outside the Stade de Suisse.

The Scenario: break or sprint? The longer the race goes on the more the chances of a break succeed and now we’re into the third week the chances of a move sticking are high. Several sprint teams don’t have to toil from the start, Dimension Data for example can say “we’ve won four stages” and point to Lotto-Soudal to get on with it. However the terrain at the start is less obvious for a breakaway, when we saw the Business Class breakaway from Andorra to Revel it formed over the giant climb, here the roads are not so selective. 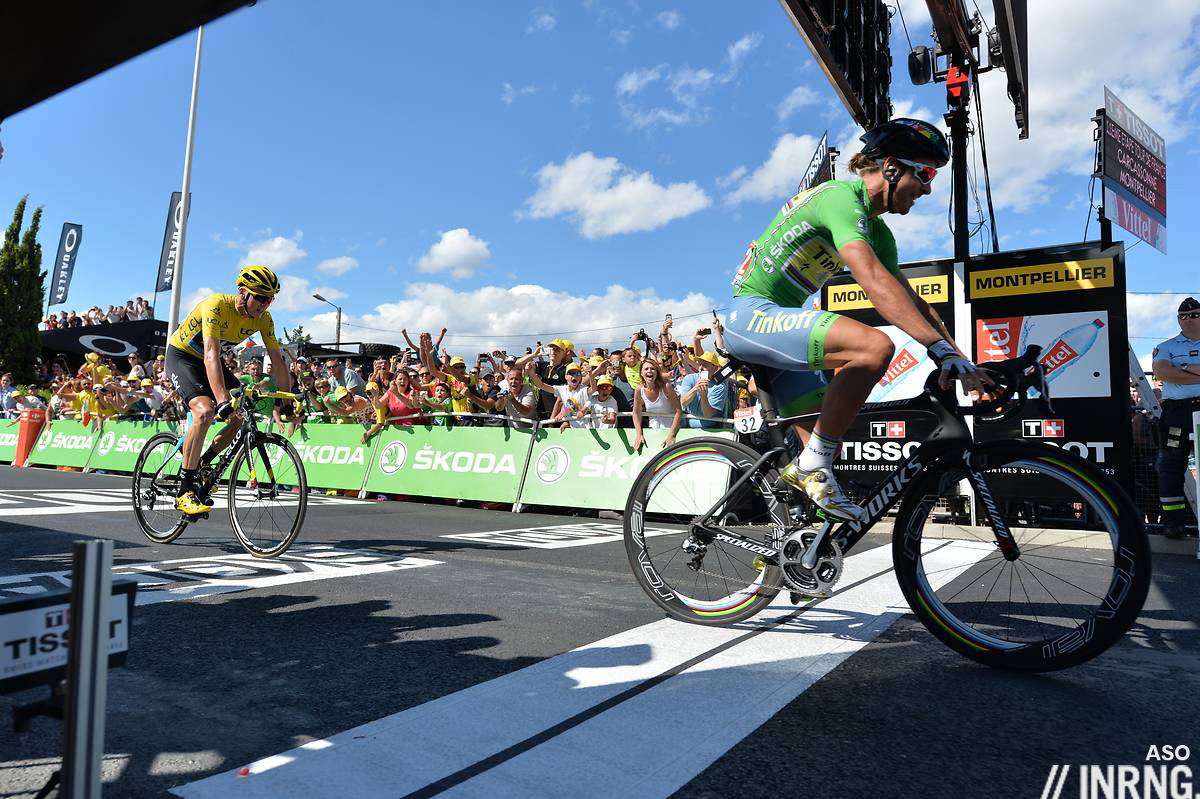 The Contenders: if the finish line was 500m earlier then Peter Sagan would be a much stronger contender but the long finishing straight means his sprint rivals have a chance to get into place for the finish. If he gets in a breakaway and it sticks then he’s an obvious choice. Given the hilly finish and his proclivity for going up the road Sagan remains the prime pick here.

Greg Van Avermaet is another pick and ditto Michael Matthews as both have a fast finish suited for today’s stage. Both went in the high quality breakaway to Revel.

Would you bet against Mark Cavendish? His form is good and his confidence is higher but this is a tricky finish for him and all the other sprinters.

How many of the sprint teams will work to set up a sprint? If you’re getting that nagging feeling the Tour is about to come to an end all too soon then imagine how it feels for André Greipel and Alexander Kristoff who haven’t had seized their chances. It’s for this reason Lotto-Soudal and Katusha may work hard today to set up a sprint. The same applies to a lesser degree for Etixx-Quickstep and Marcel Kittel.

Perhaps the race leaving France brings the first French stage win comes via Bryan Coquard? He’s an outside pick but with his light build he’s suitable for the finish only, like Sagan, he’d surely want the finish line drawn at the top of the climb.

Fabian Cancellara is the local. The Cancellara of old might have tried jumping clear in the finish here and exploiting the cobbles but maybe today he’s more likely to go in the breakaway.

Weather: sunny, warm and 25°C and a peak of 29°C at the finish in Bern. A light breeze from the north but nothing tactical.

TV: the finish is forecast for the later than usual slot of 5.50pm Euro time. No other race attracts as much TV coverage but if you can’t find it on TV at home cyclinghub serves up a pirate feed.