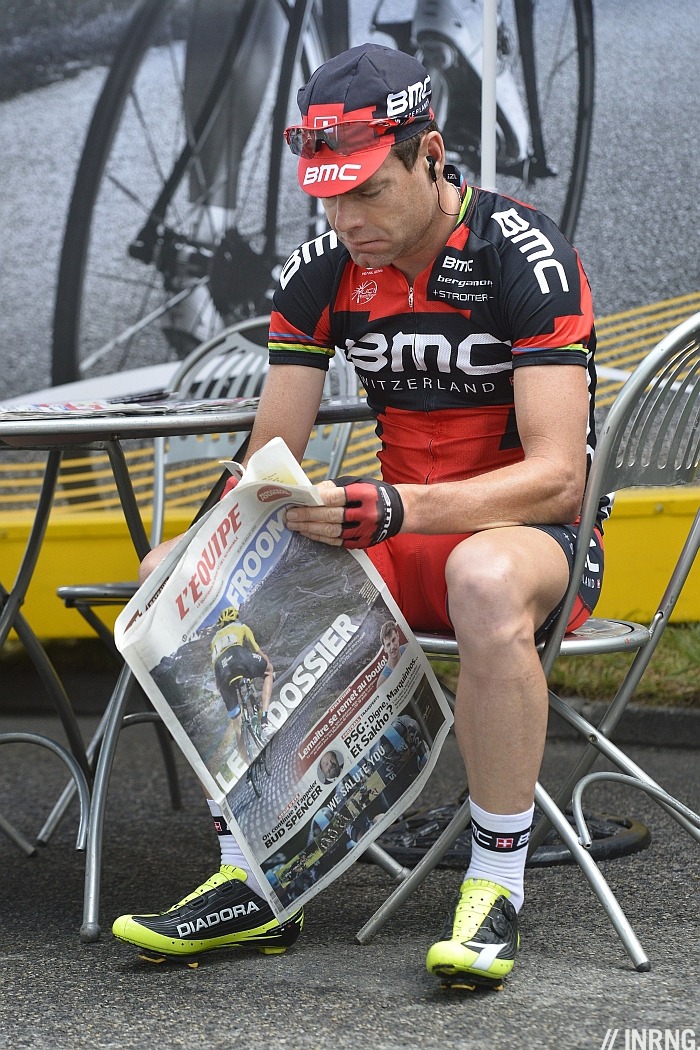 If you’re able to catch the Tour de France live on TV most days, chances are this is only part of your experience of the race during July. There’s lots more to read about and listen to and French sports newspaper L’Equipe is required reading for many on the race.

The History: You might familiar with the story of history of L’Equipe but if not, here’s a rushed version. Its forerunner was L’Auto, a newspaper born out of the Dreyfus affair. This was a huge political scandal involving a French army officer wrongly-convicted of supplying intelligence to the German empire. Nationalism, anti-semitism, espionage and more turned the case of one man into a wedge issue that divided France for years after it erupted in 1894. L’Auto was launched in 1900 after a group of anti-Dreyfuss backers disliked Le Vélo’s pro-Dreyfuss stance. It wasn’t a roaring success and by late 1902 L’Auto’s needed something to boost sales so they came up with the idea of the Tour de France as a stunt and the first edition took place the following year. After a bumpy start the Tour became a fixture and in 1919 the yellow jersey was born, yellow because L’Auto was printed on yellow paper.

Come the second world war and there were questions about L’Auto’s allegiance to the Nazism after it fell under German ownership during the occupation. All newspapers involved in collaboration were shut down after the war, L’Auto’s doors were even nailed shut. However editor Jacques Goddet had showed his support for the Résistance, allowing the covert printing of pamphlets with L’Auto’s paper and plant and so he was allowed to reprise the venture, this time under the name L’Equipe, “The Team”. A condition was that L’Equipe ditched L’Auto’s yellow paper so white was used. In 1948 it became a daily paper.

The paper continued to organise the Tour de France in conjunction with Le Parisien, another newspaper and in 1964 Emilien Amaury, the Parsien’s owner, bought L’Equipe. In time the business was restructured with Amaury Sports Organisation (ASO) owning the Tour de France and other sports events and the newspaper as part of Éditions Philippe Amaury (EPA) which owns L’Equipe and Le Parisien among other titles meaning the race and the newspaper are corporate cousins much like the Giro d’Italia and La Gazzetta. 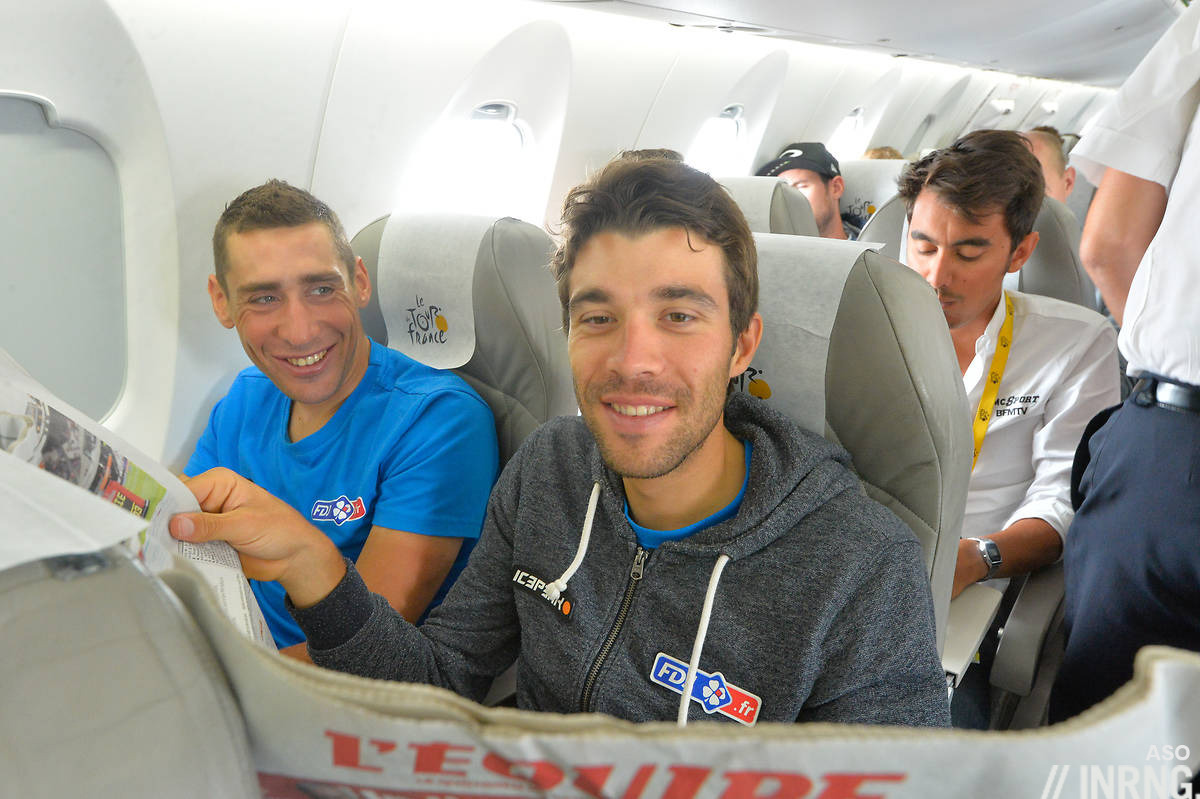 Today: the newspaper and the race are separate but there are obvious historical connections and lingering privileges as L’Equipe remains the house paper for the Tour de France, although while you see Gazzetta signs on the finish gantry in Italy, L’Equipe doesn’t have the same visibility during the Tour.

The task of reporting the race has changed over the years, once upon a time a newspaper would tell the story of the race with the who, where and when, a chronological account of events. With live TV this is relegated to small box as it’s old news by the time the paper hits the streets.

This summer’s Tour reports in L’Equipe includes a series of “what happened at the hotel” stories as a journalist tracks the day’s stage winner to their hotel to recount the celebrations and what is going on around (the mysterious woman in high heels and hotpants accompanying Tinkoff; the IAM mechanic pouring a bottle of beer over Pantano’s head) plus a selfie taken by the winner for the newspaper. O tempora o mores.

The writing style is enjoyable with a poetic flourish. For example today there is a page on Romain Bardet’s attack on the Grand Colombier and the difficulty of escaping Team Sky. It deploys a food theme throughout, first saying “snacking is bad for your health” as it makes allusions to Bardet’s bite-sized attempt and continuing with talk of the Team Sky “hypermarket” monopolising the race at the expense of the little village store. Similarly even the daily review of the stage is pleasurable to read for if you know what happened you still want to read how they frame it.

Reading L’Equipe in July is a pleasure for the cycling fan given the sport’s prominence in the paper, the football stories have quietened and are relegated towards the back, a plus compared to reading La Gazzetta in May where the Giro always feels diminished by the way you have to wade through interminable soccer speculation. The Tour is often the front page news but best of all is the amount of original content. Today there’s 12 pages to pick over although two are used up for listing the full classification and startlist. Just to cite today there’s analysis of yesterday’s stage with a focus on Sky’s dominance and Nairo Quintana’s impotence (“Quintana simple spectacteur” needs no translation), a two-page interview Greg LeMond about hidden motors and some snippets of gossip such as Astana will ride on Argon 18 bike next year and Jérôme Coppel is considering retirement as he’s yet to have an offer in the wake of IAM Cycling’s demise. The only downside, if we can call it one, is the hyping of French riders. The writers are probably more sanguine about the chances of Pinot, Bardet et al but sticking a French rider on the front page probably ensures a sales boost compared to Froome or Quintana; obviously the vast majority of the readership are French and keen to read about home riders just as Velonews gives prominence to US riders and The Cycling Podcast speaks to a lot of British riders and managers. A century ago L’Auto was virulently nationalist and luckily there’s nothing like that today. All riders say the Tour de France is a pressure cooker but the French riders must feel it more given they get the front page treatment although this is also a privilege.

Is it the house newspaper? Yes and no, you’re unlikely to read a lot of pro-Velon content celebrating the cartel’s latest deal but that’s probably true across a lot of the French media. Being a French workplace the workers union at L’Equipe has its role and apparently there a fuss was kicked up a while ago when told to give prominence to an ASO owned race, from memory one of the Norwegian events and the journalists said it didn’t merit that much. Today it’s said France Télévisions are the ones who really lord it at the Tour.

The stance of other newspapers is interesting, they’ve long found it awkward to report on an event that used to belong to a rival, to give publicity to the opposition. In the 2000s Le Monde, France’s establishment newspaper, gave up reporting the results believing they represented little more than a pharmaceutical concoction and quite right they were. Today other papers are restrained or try to take different angles, for example Liberation has features exploring sexuality in the peloton.

L’Equipe.fr: the newspaper has a website but it’s not identical to the paper, breaking news will go up first on the website but richer features such as longer interviews or journalistic scoops will be reserved for the paper and only later appear online, sometimes behind the subscriber paywall and only later for the general public.

Conclusion
There’s plenty of great content to enjoy in July from TV, podcasts to listen to and plenty to read but L’Equipe is central to the race’s coverage and an essential read during the race just as Het Nieuwsblad is required reading in the spring and La Gazzetta Dello Sport is for the Giro. Priced at €1.40 L’Equipe is as much a part of the morning ritual in July as breakfast.