Up and down all day and it’s live on TV from start to finish. This is a promising stage given the hilly terrain suits a breakaway and the difficulty of the Grand Colombier, climbed twice in the finish.

Stage 15 Wrap: three factors ensured a slow stage: the block headwind, the flat profile and today’s stage because anyone attacking yesterday diminished their chances today. Alex Howes, Cesare Bennedetti, Jérémy Roy and Martin Elmiger took off to the relief of the race organisers and TV producers who didn’t have to film one peloton all day. Mark Cavendish won the sprint. Marcel Kittel appealed to the commissaires. You could see why they reviewed the finish, you could see why they gave it Cavendish. In the run to the line it was a pleasant surprise to see a white jersey and John Degenkolb, he’s still got that blue plastic splint on his finger.

The Route: don’t call this the Alps, today’s stage is in the Jura mountains instead. Since the whole stage is live on TV from start to finish we’ll go through the stage with a bit more detail in case you want info on what’s coming up next during the broadcast.

After yesterday’s horizontal route this puts the emphasis on the vertical, 160km and 4,100m of vertical gain. Right from the start the road rises and falls even before they reach the Ain valley and tackle the Col du Berthiand (6km at 8%), a long and even drag up a big wide road for 6km. A breakaway will try and force its way clear here but it’s hard to get out of sight. A fast and regular descent follows before an unmarked climb to Peyriat, nothing big 4-5%.

There’s a descent that follows with warning signs of 15% but it’s not that steep, the obstacle instead is the corrugated road surface, the rippled tarmac will make riders bounce across the road before they arrive in Cerdon.

The Col du Sappel (8.8km at 5.6%) is in three parts. First is a steep and narrow road out of Cerdon, then a long drag on a main road past a huge memorial the Résistance and then a turning onto a smaller, narrow road with a stretch at 13% before the top of the climb.

The Col de Pisseloup (4.9km at 5.8%) is more regular, a road lost in the middle of woodland with a steeper finish towards the top. Then comes a gentle descent and one of the rare flat sections of the race as they head to Hauteville-Lompnes, birthplace of 1967 Tour de France winner Roger Pingeon.

The Col de la Rochette is a steady climb (5.1km at 5.4%) to a tiny ski station before a regular descent and then an awkward unmarked climb out of Hotonnes, 4.5km at 6.5% which makes it harder than some of the previous marked climbs. 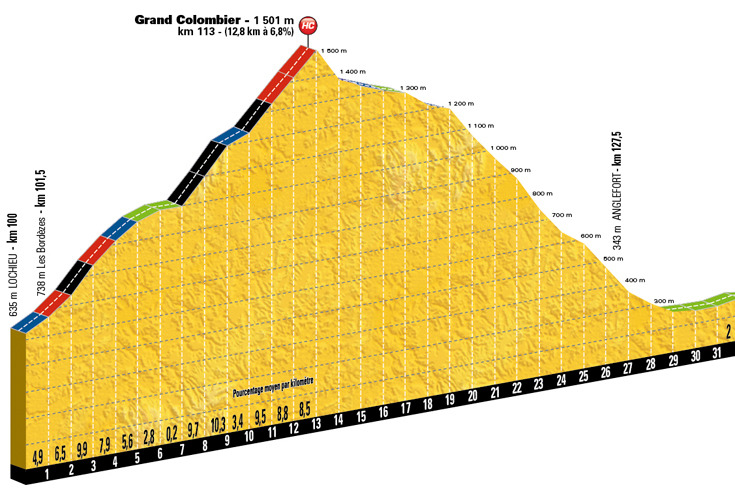 With 60km to go they reach Lochieu and the start of the Grand Colombier (12.8km at 6.8% but with a brief descent mid-way). A gentle slope for a moment and then the road switches to 10-11% for the next 5km, all on a narrow, grippy road. It drops for a moment and then resumes with 2km at 10%, eases for a moment then tackles the final section to the top with 3km at close to 9%.

They descend the Grand Colombier at speed, the road has long ramps at 12-14% and some wide hairpins. With 38km to go they turn onto the finishing circuit and begin a very sketchy descent, a side road off the Grand Colombier through woodland, it’s shaded and has off-camber bends, steep sections and a rough, granular surface. 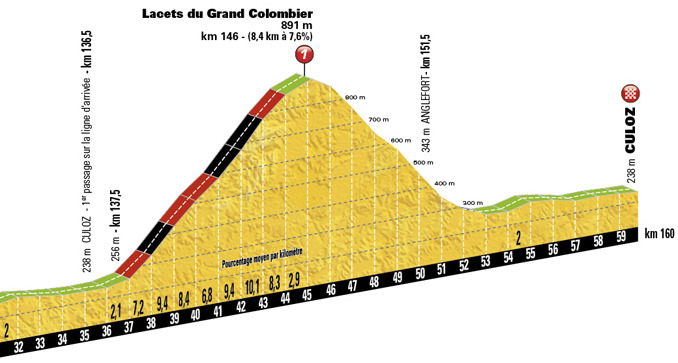 With 32.5km to go they reach the end of the descent and ride along the Rhone valley to Culoz and cross the finish line with 23.5km to go. They then begin climbing the Grand Colombier again, this time the southern flank and on a steep road with regular 10% sections. Then come the famous lacets or hairpins, a snaking section of road that jut out on the corner of the mountain, climbed first the Tour de France in 2012. Once past the last of the hairpins the gradient slowly eases before a right turn and the same sketchy descent again.

The Finish: after the descent they pick up a larger road which keeps heading downhill, it’s fast and open with two small uphill bumps on the way to the finish, which pose no more challenge than one gear change. As they come into town there’s a roundabout that’s not in the roadbook – has it been demolished? – and then a flat finishing straight of 250m.

The Scenario: they’ll be a scrap to get in the breakaway today, this is The Day all the breakaway specialists will have marked in their diaries so it’s unlikely the first attackers are left to get on with it, they’ll be a fight up and over the first climb and possibly longer.

If all the earlier climbs suit punchy riders the Grand Colombier is a much bigger climb, the equal to anything in the Alps or Pyrenees and a sustained effort. So as much as many will try to crowd the final breakaway the finish is reserved for those who can climb well.

Watch out for the second race among the yellow jersey group too the slopes and the descent can allow riders in and around the top-10 to make their move. There’s the chance of some teams using this as ambush country to turn the race upside down but let’s not get out hopes up. Team Sky’s challengers may not be up to it: Astana haven’t looked strong so far, BMC Racing race conservatively and Movistar might still be licking their wounds too before the Alps. The Contenders: Stephen Cummings has won one stage and here’s another opportunity for the opportunist. It’s hilly and selective and as we saw on the Aspin he can hold Vincenzo Nibali and Dani Navarro at bay. Team mate Serge Pauwels is suited to this too.

Rafał Majka and Vincenzo Nibali are two big names to watch today. Majka though didn’t go in the moves on the stage to Mont Ventoux which is surprising given he was, and still is, in the hunt for mountains points. Is something not right? Or maybe we’ll see him up the road again today and using the Grand Colombier as his launchpad. Nibali’s proving enigmatic this race but should feature and the descending today suits him.

Remember Julian Alaphilippe? Of course you do, he was hot property in the opening week but has dropped out of contention since but this hilly yet not altitude stage suits him well. Jarlinson Pantano won the final stage of the Tour of Switzerland by climbing over the mountains and using his sprint. That bodes well but his win rate is low. Another strong rider with a low success rate is Rui Costa who is good for today. Despite his strong ride at La Pierre St Martin last year Tony Gallopin has eschewed the overall classification for stage wins, a brave decision. He’s won in the Jura before and can climb and sprint well from a breakaway. He’s looked nervous in some stages but given Lotto-Soudal already have a stage win maybe he can put his poker face on and take the stage win the French are waiting for.

There’s also the chance we get the big names contesting the win after the early break doesn’t get enough time or even some big names light the touchpaper early. Among the current top-10 Adam Yates, Alejandro Valverde and Dan Martin all have a fast finish. Romain Bardet could do his thing on the descent too.

Weather: sunny, 27°C and the wind has stopped blowing.

TV: live on TV from 12.55 Euro time and the finish is forecast for 5.35pm. It should be worth watching the break form at the start, there’s likely to be a lull in the middle once a move’s established before the action at the end. 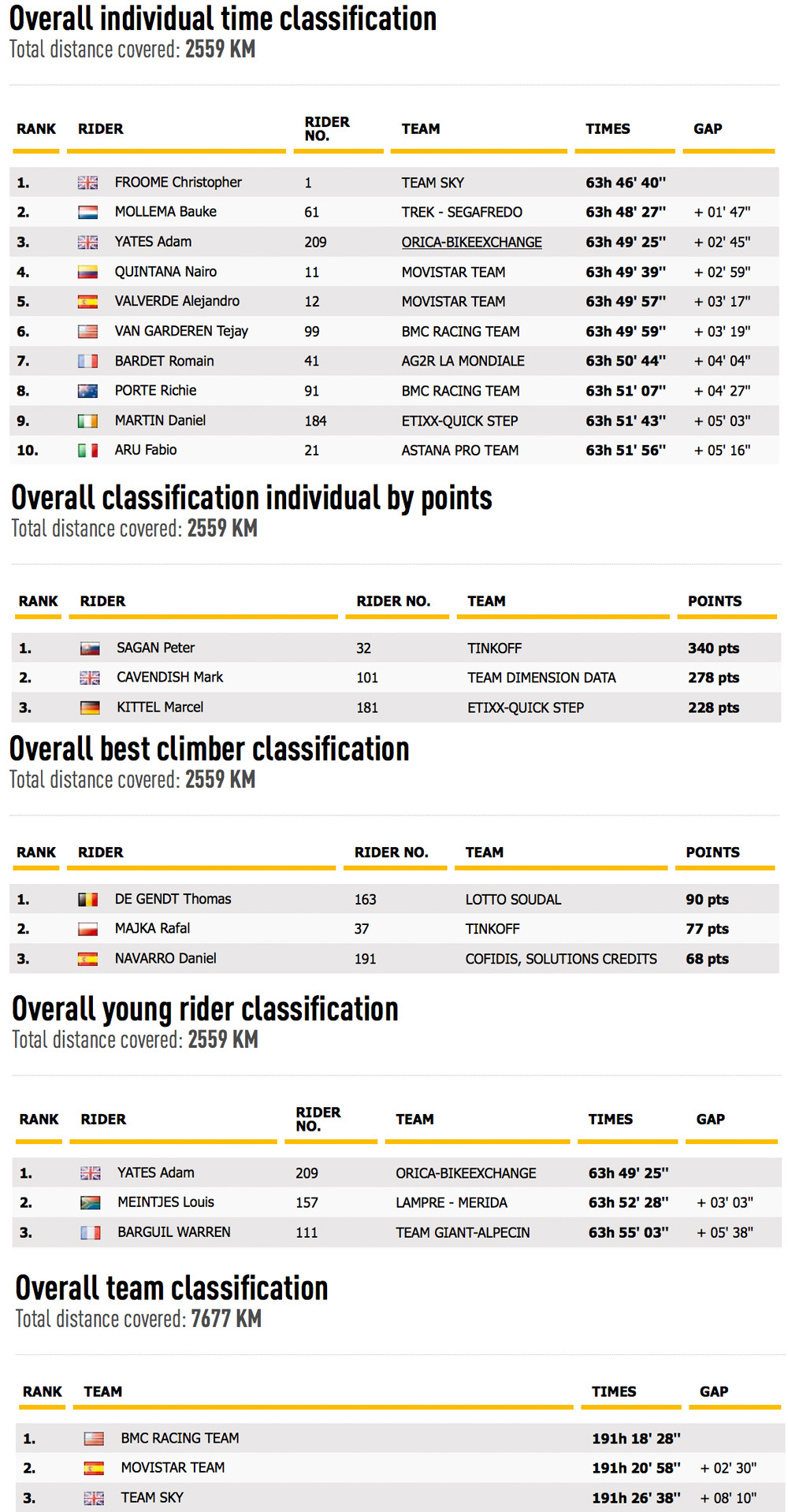