Back in the Tour de France for only the second time the Grand Colombier is an unheralded climb that offers a physical test and then rewards with impressive views. 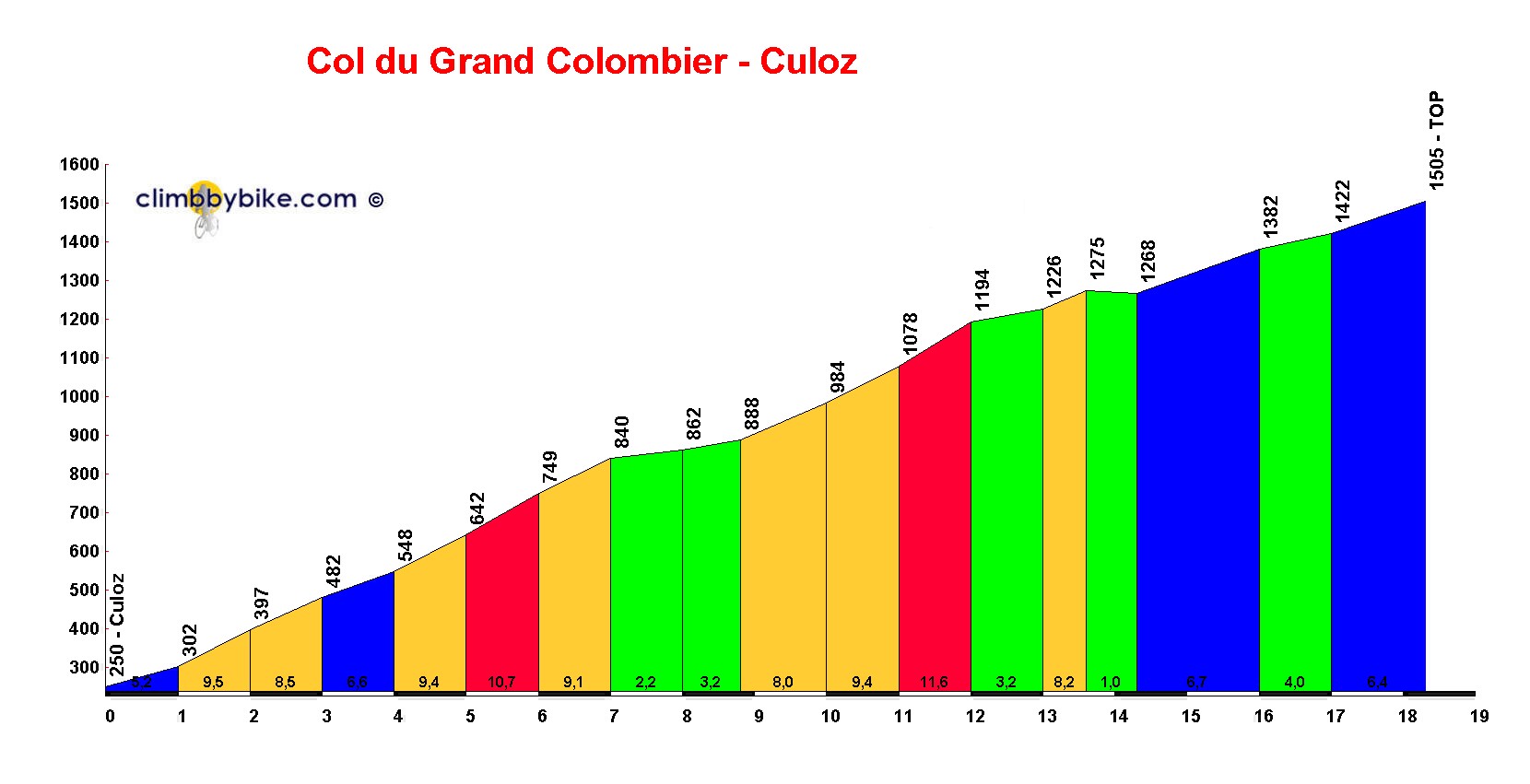 The Route: there are several ways to the top. Like Mont Ventoux there is a single road over the top but there are different approaches. This piece looks at the climb from Culoz via the lacets or hairpins. The D120 is 18.3km long and averages 6.9%.

The Feel: The start in Culoz isn’t promising. There’s little of interest in the town, the kind of place where people are drinking beers in the morning and it took several laps of the town to find a bakery for a pre-ride croissant. It’s half-famous as the home town of Christophe Lemaitre, the 100m/200m specialist in athletics. Perhaps he saw Culoz and wanted to get out quick? Certainly running is easier than climbing the Grand Colombier: the road starts steep. The mountain dominates the town with its cliff faces, look up and you can see a diagonal line scratched across the cliff face: that’s road you’ll be on soon.

Because it’s steep you gain height fast. First past suburban houses, then through the vineyards and soon you see the Rhone valley and the Lac du Bourget, France’s largest lake, and beyond it the Alps. It’s a view that’s part breathtaking, part geography lesson. The road edges along the cliffs to the soon-to-be famous lacets. 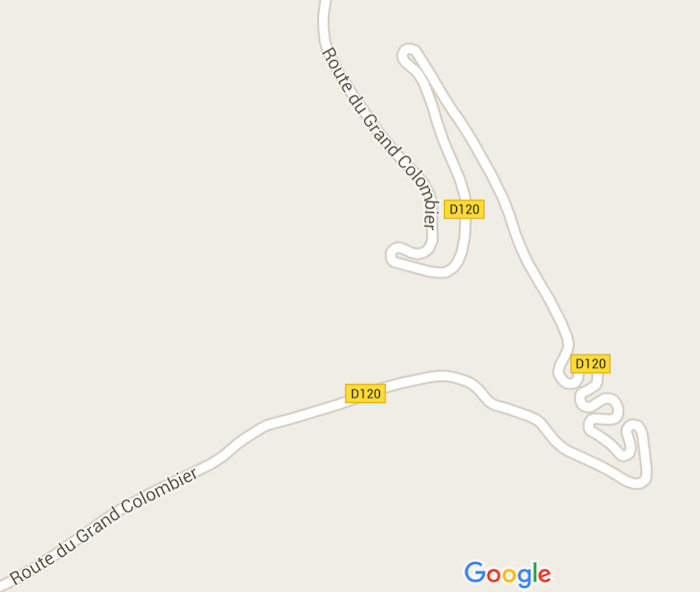 These bends are odd, they wind up around a promontory of rock, almost like a tower in the corner of a castle where you ride up a spiral staircase to the ramparts. As magical as this sounds it’s just steep and twisty but stop at the right place and the views invite you to linger and watch the world below go by.

Online forums often mention the heat. The first part of the climb is south-facing and parts of it have a rock wall to radiate the heat back at you but most of the climb is shaded, press on through the exposed part and you’ll find it easier in the woodland. Once past the famous hairpins the slope eases until you pass the route joining from the south, soon after the road switches back in the opposite direction and the road rears up, more 10-12% sections await before the next hairpin marks where the slope eases.

Higher up and the road crosses a cattle grid and enters the final open section and there’s a steady gradient to the top with pastures and views of the Rhone valley below. 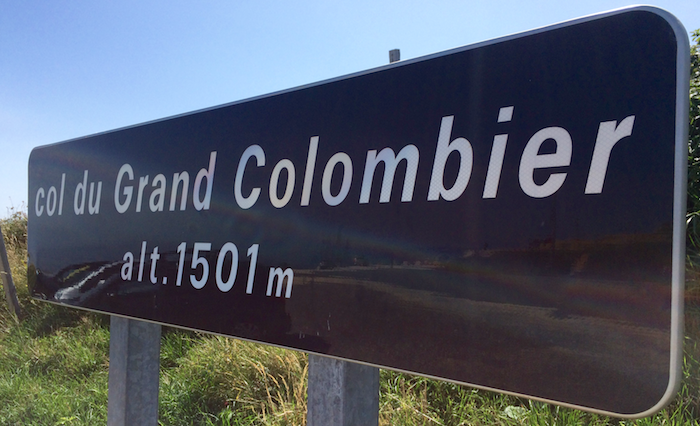 Summary: steep, irregular and a mix of roads, first the quick escape out of a scruffy town, then stunning views of the Rhone and Alps before long straight sections though shaded woodland and the final section reaching the open summit and more rewarding views. Be sure to try it on a clear, sunny day.

Ride more: reach the top, enjoy the views and then you can descend the other side. When you reach the fork it’s wiser to descent to Lochieu, it’s still steep but take the left turn to Virieu and you’ve got some 20% sections. Other options include the sister climb of the Col de la Biche, almost as hard or loop back south to ride around Lake Bourget and pick off as many climbs or as little of the climbs near the lake as you want.

The Tour: They’ll race up the other side, drop down before taking the valley road around to Culoz, cross the finish line and then tackle the steep part of the climb and the lacets section before rejoining the already used descent and valley road to the finish. The long climb is not as steep but can still be used for attacks. On paper it looks suited to punchy riders, the stage has something of Liège-Bastogne-Liège about it although the Grand Colombier is much longer than anything in the Ardennes. On paper it’s got the vertical gain of the Galibier but not the altitude.

History: climbed only once in the 2012 Tour de France it led to nothing because it was some way from the finish. However this has been the decisive climb of the Tour de l’Ain stage race every August for many years and for years on end David Moncoutié seemed to win again and again. 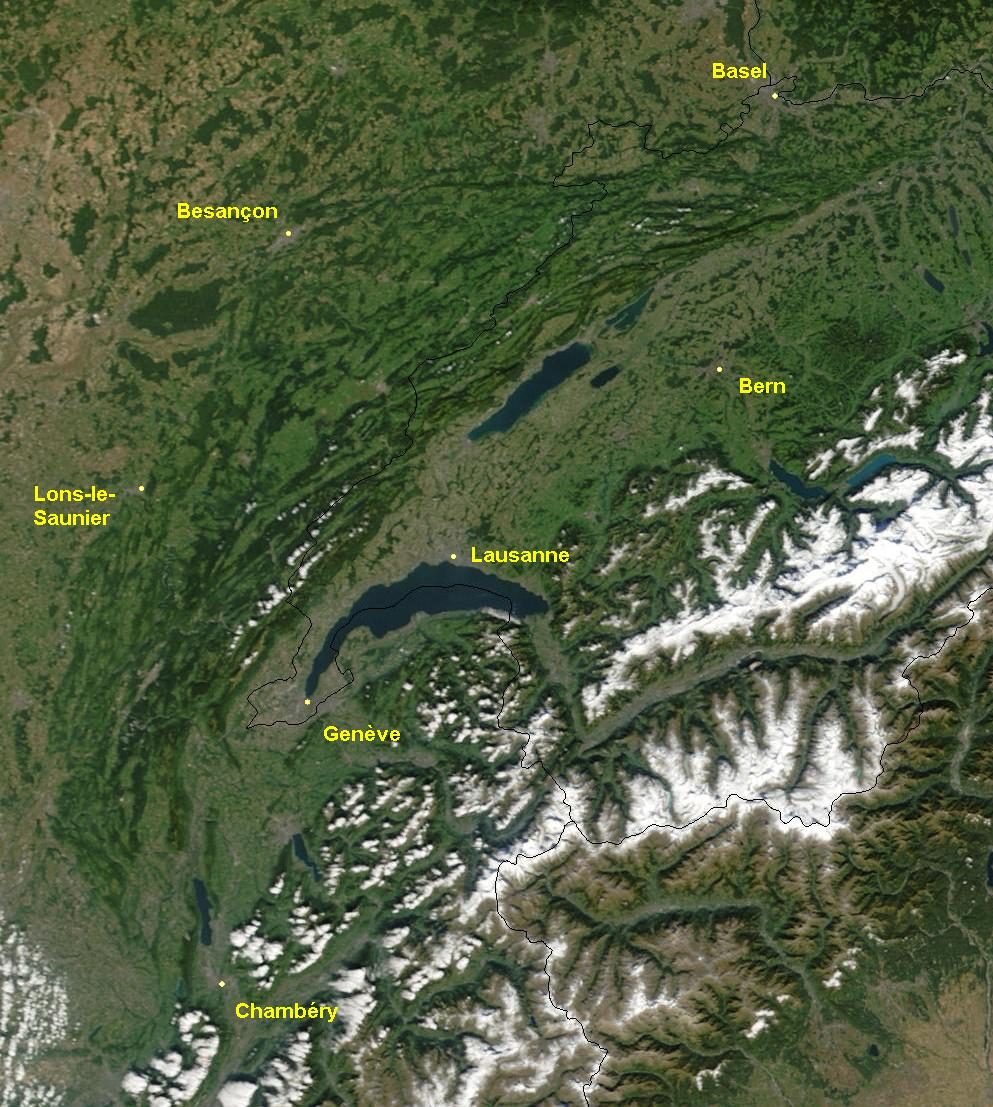 Jura: as in Jurassic and not the Alps. This is a mountain range north of the Alps. Look at the picture above and the mass of white peaks are the Alps, to the north you can make out some green crinkled ridges, these are the Jura mountains. They’re scenic with river canyons and cliffs and totally off the radar with no races to speak of nor much else. See how the Jura arcs round to the South? The Grand Colombier is almost at the end of this.

Travel and access: Aix-les-Bains makes a good base with rail and road access and plenty of roads to ride in the area included the fearsome Mont du Chat and also Mont Revard and access to the Alpine climbs.