Book Review: The Art of The Jersey The Art of The Jersey by Andy Storey

Pro cycling requires a working bicycle and once that’s taken care of surely the jersey is the next most important thing? When people think of the Tour de France many associate it with the yellow jersey, a genuine icon. More than a textile the jersey has become a shop window to display the sponsors who make the wheels turn around and once you look over time the jersey chronicles design, consumerism and technology.

The book features over 200 jerseys, many belonging to Storey’s own collection with others borrowed for the occasion. It’s like having a museum on your bookshelf or coffee table, a private collection of jerseys to display and the accompanying notes.

Storey has been working in the cycle trade for years and has a keen interested in jerseys, detailed on his blog at cycling-jersey-collection.com and the work has now been turned into this book.

It begins in the 1950s and skips quickly through the next 30 years as there was little revolution in the product design and several of the jerseys shown are replicas rather than originals but show us the plain designs in existence for years. A lot of this was because of technology, wool jerseys stayed the same for years. The “flocking” technique explained in the book allowed a logo be placed on a jersey. The Brooklyn jersey features in here, often cited as a classic from the 70s as much because of Roger De Vlaeminck’s style and sideburns as its prime design. Storey celebrates the jersey by explaining its novelty, the stitching of wool and acrylic panels to achieve the legendary stripes. 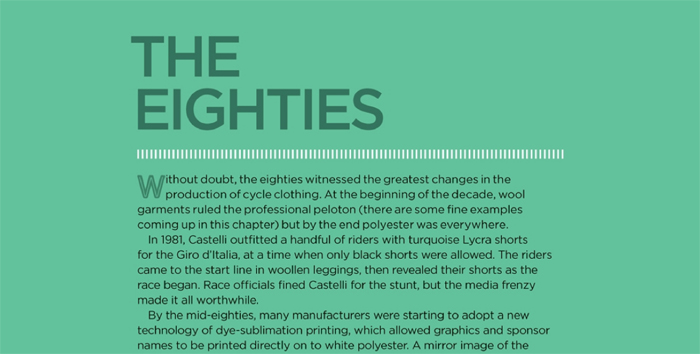 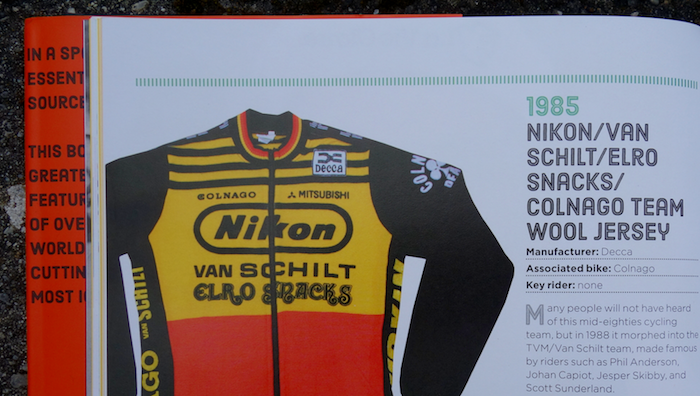 Some of the small details spark interest. The 1985 Nikon-Van Schilt-Elro Snacks-Colnago jersey features a full length zipper and slightly misaligned sponsor names caused by the sewing. Fast forward to 2011 and the sponsor-heavy Androni Giocattoli (10 sponsors on the front of the jersey alone, many more on the side, rear and shoulders) still has a white zipper cutting the sponsor names in half, we’re still waiting for the day when the zipper can match the fabric.

Or take something else like the Ariostea jersey from 1988 made by Vittore Ganni, a tailoring workshop making sports clothes for football clubs, the Milan ballet and now cycling and a young Armando Castelli began work before taking over the business and putting his name on the business. Meanwhile the jersey itself with its tiled pattern was only possible because of developments in sublimation printing and the tiles show off the product of Ariostea, an Italian ceramics firm. This in turn makes you think about the sponsors and the days when a mid-size Italian business wanted to back one of the world’s top teams. Ariostea’s factory in central Italy is only a short ride away from the Stadio Mapei, the Mapei sports stadium bought by the adhesives mogul Giorgio Squinzi who sponsored a cycling team and whose jerseys feature in this book, either the summit of sublimation or the low point depending on your tastes. The joy of the book is journeys like this, you might recall a jersey and start pedalling down Memory Lane or branch off to find which other riders were on a team and so on.

Loyal readers might remember the review of The Jersey Project by Bill Humphreys and Jerry Dunn but this American book has vanished, or at least the website behind it has gone. There is still the original Dutch version Koerstrui which catalogues Henk Theuns’ huge collection of jerseys. If there’s a criticism of The Art of The Jersey it’s that it’s not big enough. Koestrui has more jerseys, five times as many but this means they get less attention, sometimes 12 per page and with no commentary on them. Storey’s collection is weighted towards Santini jerseys too, a lot of specials from the Italian manufacturer like national champions jerseys but it never feels like a Santini catalogue, there’s plenty from the likes of Castelli, Exteondo, Rapha and more.

The Verdict
An enjoyable read with a variety of jerseys and the accompanying text is helpful whether indicating who wore a particular jersey or explaining some of the technical features behind it, the “art” is not just the artwork but the craft that goes into the manufacturing of the jersey. This is for those wanting to explore cycling history from the 1970s onwards in an alternative way than the usual tales of the Tour de France, Merckx or Hinault. Instead this is the story of the jersey, sponsorship and graphic design.

Disclaimer: this book was sent free for review and the author Andy Storey works for Prendas who sponsor this site. This could obligate a nice review but this website would go downhill faster than Romain Bardet if I started to do puff pieces so hopefully the above is a fair take