No suncream. No sand. No sheikhs. No skyscrapers. No seafront esplanades. Welcome to Belgium with its knowledgeable crowds, cold weather, cobbled tracks, betonwegs and muddy landscapes. The Omloop was one of the best races of 2015 and the hard but not harsh course makes an ideal start to the spring classics season.

Starting and finishing in the city of Ghent the race occupies a triangular sector to the south of the city, criss-crossing roads to use as much of the terrain as possible. As the profile suggests, the first 100km are without too many obstacles. They tackle the infamous Muur van Geraardsbergen early, it helps to sap the legs before more and more climbs appear. Things get serious with 80km to go and the Kaperij climb, anyone badly positioned from now on is going to waste energy and pay for it sooner or later. A succession of short climbs, cobbles and cobbled climbs ensures the process of attrition. Watch for Tom Boonen on the Taaienberg and then a series of attacks, moves, splits and crashes will hone down the field. The final climb of the Boemebeke is new this year thanks to roadworks on the Molenberg and the novelty is nothing special, it’s asphalted and not steep and in a land criss-crossed by thousands of racers and every day it’s yet to have its own Strava Segment. The final cobbled sector is the Lange Munte, a long straight section that’s tiring but with a regular surface but very exposed to the wind.

The Finish
There’s a new route in town. The old finish with its narrowing streets and slight uphill drag is gone. Sunday’s race uses bigger approach roads and a wider finish, the Emile Claaslaan, but still with a slight uphill drag to the line. Alexander Kristoff is the prime pick, the top favoriet. He delivers a powerful sprint and is at ease in the hardest of classics. He’s in great shape with six wins this year and comes with a strong team dedicated to his service. Rather than look for weakness perhaps the question is whether he bothers to hard here. He may well prefer to sit tight and play the odds on a sprint rather than going on the rampage and tracking every move. So he’s the reductive pick too, the most likely to win if others fail. Tom Boonen is the popular pick, the people’s choice. His looming retirement is going to be a perpetual theme this spring. The Omloop is the missing trophy in his collection of spring classics and a chance to correct last year’s fluffed finish. A crash in Abu Dhabi damaged the hearing in his left ear and a triumph here would probably result in deafening roars from the crowds. But his form is uncertain, plus he’s on the mend from a recent crash in the Algarve. Still this would be a good way to establish himself as the cornerstone of the Etixx-Quickstep team because there’s a lot of competition. First of the internal rivals – and let’s not play up the politics and drama but just acknowledge this is a team with options galore – is Nikki Terpstra. The Dutchman has exploited his team’s strength before to solo away as other riders dither knowing if they give chase then they’ll be countered by a Quickstepper and says he wants revenge for last year’s loss but his form doesn’t look so impressive or at least there’s less to go on given the team have avoided the usual Gulf sandbox testing. Iljo Keisse is the local pick and packs a sprint which Stijn Vandenbergh doesn’t but the tall Belgian is in a great form. Oh and Tony Martin is riding too which brings yet more options but also bolsters his team with his tractor-beam ability to reel in any threatening breakaway. If Peter Sagan wins we can write the story backwards. “It was inevitable” we’ll say, adding he’s got a fast sprint, he’s world champion, he’s more mature and his Tinkoff team finally look capable of offering him the support he needs in the finale of a hard race. A likely story yet he has not raced since San Luis so we’ve nothing to gauge his form. If he cracks then Daniele Bennati and Oscar Gatto are in winning form while Adam Blythe is fast and Maciej Bodnar is handy in a hard race too. Sagan has only raced here once before when he was a neo-pro in 2010. Experience helps but he knows his way around Flanders. Greg Van Avermaet has been knocking on the door for so long his knuckles must hurt. Famous for being the nearly man he’s picked up in 2016 where he left off with a series of high placings but no win yet so far this season. It’s the same story over the years in the Omloop, since 2012 his worst result has been sixth but no win. BMC Racing bring Philippe Gilbert, a previous winner of this race back in his FDJ days and an uneasy team mate of GVA, they don’t exactly holiday together. Gilbert is in great form having won the Vuelta a Murcia. For all his success in the Ardennes he’s a hard man to beat in tough race like this as he’s willing to attack solo and can take the sprint in a small group. Expect Daniel Oss to feature and Jempy Drucker collects a lot of top-1o placings. One time medical student Floris Gerts won the U23 race here in 2015 and now starts the Elite race. 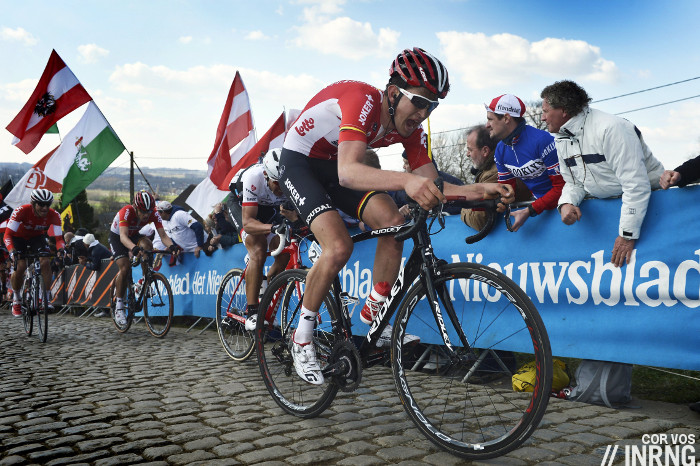 Tiesj Benoot is Lotto-Soudal’s kopman but how can he win? He’s a promising rider who probably needs a harder and more selective route as he’s handy in the hills as we’ve seen in Mallorca this season and even the Dauphiné last June. His Lotto-Soudal team comes with many capable riders with Jurgen Roelandts, Jens Debusschere as lieutenants plus new Topsport graduate Jelle Wallays. All of them would make a worthy winner but how they make this happen is the question that will preoccupy team management. Moreno Hofland is almost a stealth pick. The Lotto-Jumbo rider is a sprinter but able in the classics too and in the absence of Sep Vanmarcke he’s the best pick for the Dutch squad. Hofland is often the-rider-who-gets-beaten but if the field is shrunk and a group comes in he’s a candidate for the sprint. Tom Vanesbroek is also quick from a group and jonge Mike Teunissen, pictured, one to watch.

Trek Factory Racing are another team resting their best rider. In the absence of Fabian Cancellara is Jasper Stuyven who has had some solid results so far this year despite opening his chocolate shop but needs a big win soon to go from hope to hero. Giacomo Nizzolo is a podium pick in case of any sprint finish but his chances should be discounted by his poor record in cobbled classics. In contrast new signing Edward Theuns had an excellent last season with Topsport Vlaanderen, can he graduate to something bigger now? A lot of ex-Topsport riders don’t progress too far once they join the World Tour but once upon a time one of their riders moved to an American World Tour race and duly won the Omloop, that was Vanmarcke in 2012 for Garmin. 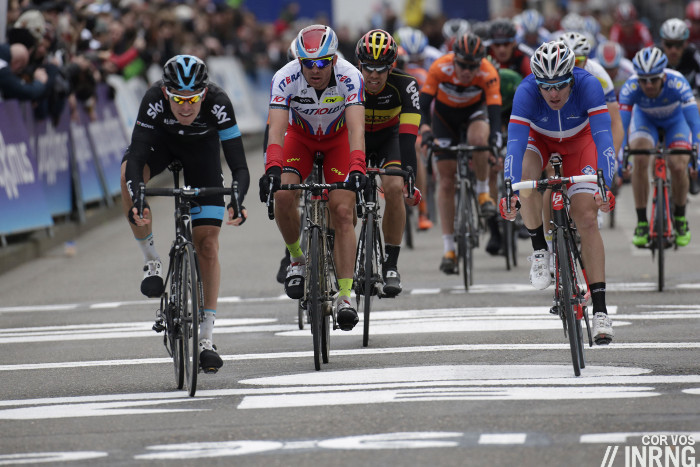 Team Sky leave out Ian Stannard for bigger days ahead so they’ll let Luke Rowe continue his progress. The Welshman got Boonen’s wheel up the Taaienberg last year and beat Kristoff to win the bunch sprint for ninth place, little details that count for a young rider. Elia Viviani is the sprint option but given his focus on the track will he be there in the finale? Neo-pro Gianni Moscon did an impressive time trial in the Ruta Del Sol but can he repeat this on these cold roads? Rowe is the best bet with the rest looking more suited to Sunday’s Kuurne-Brussels-Kuurne.

FDJ are off to a decent start and Arnaud Démare is back to winning ways after a drought. But his win in the Le Tour Med was against modest opposition so he’s more likely to be finding his bearings that rivalling the best here. He sprints well but sees himself as more of a classics specialist. Fans of the team will cheer the move to Continental tires after beaucoup punctures last year. The teams come with more options like Eneco Tour stage winner Johan Le Bon, Mathieu Ladagnous and Yoann Offredo.

Among the rest there’s not much to go on so a few pedigree picks. Jens Keukeleire leads Orica-Greenedge but after a long training camp in South Africa is the frost going to be a shock? Cofidis have decent riders to enliven the race but winning seems improbable and they’re probably waiting for Kuurne when Nacer Bouhanni shows up. Topsport Vlaanderen will surely make the early breakaway and it’ll be interesting to see which of their riders emerges as a new star. Sylvain Chavanel is in great shape and a genuine outsider with his Poweo jersey, the Belgian brand of Direct Energie. IAM’s Leigh Howard is going well and Martin Elmiger is a tough rider suited to these conditions while Dries Devenyns is in form and Oliver Naesen a local plus they have cold weather expert Heinrich Haussler. Fortuneo-Vital Concept’s Dan McClay is a handy sprinter. Ag2r La Mondiale’s Alexis Gougeard seems unable to sit tight. Gerald Ciolek is Team Stölting’s captain and can place in a sprint. Filippo Pozzato rides on reputation but his best result so far this year has been 19th place and that was in a team time trial.

The Curse! Everyone would like to win this race but the winner has often sunk without trace for the rest of the spring classics. Nobody has ever won this race and the Tour of Flanders in the same year. Cycling being a superstitious sport this is seen as a “curse” but there are surely more rational explanations:

This explains why several riders hoping for big things in the classics are not racing such as Fabian Cancellara, Sep Vanmarcke and last year’s winner Ian Stannard.

Weather: cold and dry with the mercury just above freezing around the start before rising to 6°C in the afternoon. There will be a 18km/h breeze from the ENE gusting to 27km/h which is just enough to help split things up in the crosswinds given the general direction of the race heading south before returning north.

TV: the race starts at 11.45 and local Belgian TV coverage starts at 1.30pm Euro time with studio introduction before the live racing starts at 2.15pm with the finish is forecast for 4.40pm but tune in well before to watch the action. The Taaiennberg at around 3.15pm.

The distribution rights vary a lot from country to country so check where you live and if not cyclingfans.com, cyclinghub.tv and steephill.tv serve up the pirate feeds. Women’s Race: the women’s edition is supposed to be live on TV and offers some action – plus a glimpse of the new finish – while the men are still rolling with the finish forecast for 2.55pm. Ella Cyclingtips has an expert preview of the contenders and pretenders.

Next post: The Moment Omloop Het Nieuwsblad Was Won: