Katusha have quit the MPCC grouping of teams, following Orica-Greendge’s departure too. Teams rushed to join this group when they needed the political cover and most bail the moment they have to uphold its strict rules.

The exodus is a blow to the group but at the same time the MPCC’s work is almost done as most of the ideas it promoted have now been adopted by the UCI and the ones that aren’t yet are under review.

Katusha’s exit is a slippery one. You’ll remember that in 2015 the UCI copied the MPCC’s rule on collective suspensions whereby if there are multiple doping cases in a team then the whole team stops racing. The UCI went further as its rule says a minimum stop for 15 days following two positive A-samples while the MPCC says eight days after two B-samples. Katusha say that since the UCI said they were not going to suspend the Russian team over the two doping cases the MPCC should show leniency plus any self-imposed suspension would fall foul of the UCI’s own rules:

“a suspension of Team KATUSHA during a WorldTour race based on the MPCC Rules would violate the UCI Regulations of mandatory participation and the Disciplinary Commission would then be obliged to sanction the Team.”

Technically true but a slippery claim too given the precedent. Back in 2013 the Ag2r team suspended itself following multiple doping cases and they had to sit out the Dauphiné, a triple blow given this race is a big pre-Tour prep, takes place in front of live TV and is run in their home region. The UCI’s Professional Cycling Council (PCC) would have punished the team for skipping the World Tour race under the rules but decided not to given the team and the race organiser agreed on the suspension:

The PCC decided no fine will ensue (art. 2.15.128) on the grounds that the sporting penalty was sufficient and that the organizer was supportive. The team nonetheless remains solely responsible for its actions

So it looks like Katusha are hiding behind the rulebook despite a clear precedent. This is delicious given they’ve just benefited from rulebook leniency over their suspension instead of the strict application and besides there’s the established precedent that waives the very participation rule they fear. Of course what Katusha fears is not falling foul of a UCI rule but missing some major races. Indeed many teams have praised this voluntary body and signed up as enthusiastic supporters only to walk out the moment they get into a pickle:

You might notice the theme here: teams sign up willingly but only leave the moment they get into a pickle. It’s a sort of reverse Saint Augustine manoeuvre where the fifth century Bishop wanted to partake in sexual hedonism and is supposed to have prayed “O Lord, grant me chastity but just not yet“. With our pro teams it’s like they swear vows of virtue but the moment temptation comes their way they’re off. 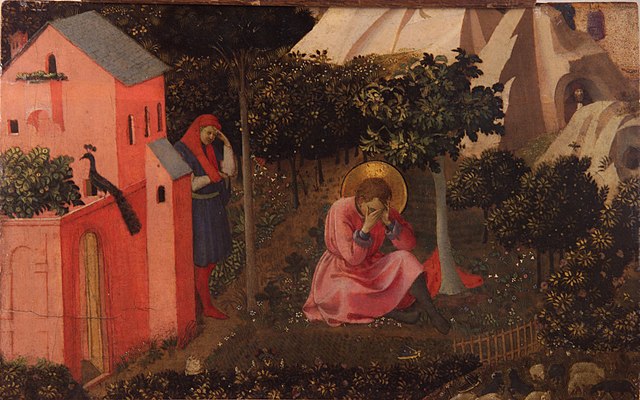 “Forgive me Lord for I have taken Tramadol”

Still both Katusha and Orica-Greenedge only joined so they could put a halo on their heads. Katusha only joined the MPCC during the battle to win back its licence at the Court of Arbitration for Sport. Hit by doping scandals the UCI wanted to keep the team out of the World Tout but the team promised to clean up and joining the MPCC with its additional rules beyond the WADA Code was seen as step in the right direction. Orica were in the middle of the Vance Review which was initiated following Matt White’s implication at US Postal and concerns over Neil Stevens’ past at Festina. Joining the MPCC was good cover with Bannan saying “we are making a commitment to be a part of the future clean cycling” as they joined. That said Orica-Greenedge are not leaving under a cloud which is worth stressing so it’s been put in bold. Instead their press release yesterday hinted it was because most of the original MPCC rules are now UCI ones with Shayne Bannan saying “we fully support the initiatives that have now become an integrated part of the rules of the sport“. This brings us neatly to the way the MPCC is almost redundant now: it’s floated good ideas and they’ve been adopted by the UCI.

Movement in the right direction
Over the years the MPCC has been mocked as toothless and the Movement for Credible Cycling always sounded overreaching, if it had started off as “Athlete Health Council” a lot of the scorn could have been avoided. But instead of bad farce it’s been a force for good. We can mock the MPCC for its weak ability to herd the teams but it’s not so much the shepherd that has a problem but the flock. The MPCC and its teams have played an important role which should be celebrated. One of the first policies agreed among member teams was the “no needles” policy, a pioneering idea that no team should be injecting anything, legal or not. The UCI copied this, the first governing body to do this, then the International Rowing Federation followed and the IOC has partly copied this too and its spread throughout sport. Maybe it would have happened eventually but the MPCC was first to push for this and presumably found an open door at the UCI. See also the copied team suspension rules mentioned above and they’ve imported some of the MPCC’s ideas on cortisone use but have not gone as far as the MPCC, which they probably should said the CIRC Report. The MPCC have also banned Tramadol use among member teams and the UCI is now looking to see if they can block it despite it not being on WADA’s banned list. In short the MPCC has acted like a think tank, raising ideas which others adopt and its rules have helped protect rider health.

Vaughters has a point here. If ASO keep the Tour de France out of the World Tour then it becomes a race by invitation-only. Christian Prudhomme has praised the MPCC in the past and said MPCC member teams would get priority for wildcard invites – which may help explain why the sulphurous Southeast team aren’t riding Paris-Roubaix this year. But in the event of the Tour still being outside the World Tour would teams rush to join? There’s next to no cost to join, the subscription fee is tiny and attending committee meetings is probably the most painful part. But Prudhomme’s praise was more about sending the Pro Conti teams here in the same way sailors would lash themselves to the mast when sailing past the Sirens. It’s unlikely the Tour would leave out BMC Racing or Team Sky simply because they don’t want to join up. Team Sky say they don’t want to join because the MPCC won’t adopt a full zero tolerance policy like they have but we should ask whether they have any objections sign up to pre-race cortisone checks and a Tramadol ban?

Summary
It’s easy to see which teams believe in the MPCC’s health and anti-doping ideas and which ones signed up for political cover and the public relations halo. Many claimed to support the rules in principle until they had to apply them to themselves. There’s a word for this and it’s called hypocrisy.

At least Orica-Greendge walked out because they took a policy decision rather than facing embarrassment. Katusha citing the strict UCI rulebook as the reason to leave is bizarre given the established precedent and it’d be more honest if they just said they didn’t want to miss some big races and pledged to be more transparent.

In many ways the MPCC’s work is done, each time it’s called for improved anti-doping measures the UCI follows and if the governing body can implement the CIRC recommendations on cortisone and Tramadol then the MPCC would become redundant.