One of the unwelcome side effects of following pro cycling is a passing acquaintance with medicine. In recent years it’s been haematology first with the haematocrit count then EPO and DIY blood doping. Now a quick look at analgesia thanks to Tramadol, a powerful painkiller that’s being used and abused in the peloton. It seems a ban is only a matter of time.

What is Tramadol
Tramadol hydrochloride is the full name. To borrow from Wikipedia it’s “a centrally acting opioid analgesic used to treat moderate to moderately severe pain”. It’s sold under a range of brand names, a veritable A-Z from Acugesic to Zytrim. 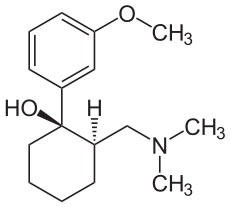 It works on the brain and nervous system to reduce pain and is a medium to strong pain killer, this is not what people take for a headache. Instead it’s used for chronic and acute pain relief. As an opiate it can be addictive. Indeed as well as correct use it is also abused. By some measures prescription drugs, including Tramadol, are abused in greater quantities in the US than illegal drugs from heroin to cocaine et cetera. Tramadol is abused around the world thanks to its addictive properties, for example it’s been widely used in Gaza where the opiate properties provide relief to bored kids and tired tunnellers alike while the British are considering banning its sale. Searching the web for information on the molecule for this piece revealed countless websites offering it for sale.

As a painkiller it’s probably got greater uses in other sports, for example where injury during play is more common, for example football. But rather than taking painkillers following injury they are being consumed before. One study by football governing body FIFA revealed about one third of the players in the 2010 World Cup were regularly taking painkillers prior to a game. This could be anything from paracetamol to Tramadol. The point is that this drug is being used and abused all round us.

Back to cycling and there are tales of it being used in recent years. It was all quiet until one Tweet launched a thousand words:

I love to see @StevoCummings win. He, like me, follows his own personal policy of no caffeine pills and no painkillers. Purest of the pure!

Phinney tweet expressed what other were thinking and he expanded on it in an interview with (the now dead) website Velonation. Since then the subject has gained more coverage and there seem to be two uses:

It’s back in the news after several people have linked it crashes in the peloton.

That’s a headline from Cycling Weekly but it’s not quite what Doctor Jan Mathieu said. In the original interview he lists a range of risk factors from weather – warm conditions mean more riders are present in the finish – to the street furniture polynesia. Only at the end did Tramadol appear. Tramadol isn’t turning the peloton into opium-den zombies, it’s a matter of nuance matters where the painkiller could be a possible contributory factor in some incidents. Many crashes in the peloton occur early in the race, long before anyone is consuming a drink of water, yet alone a “finish bottle”. 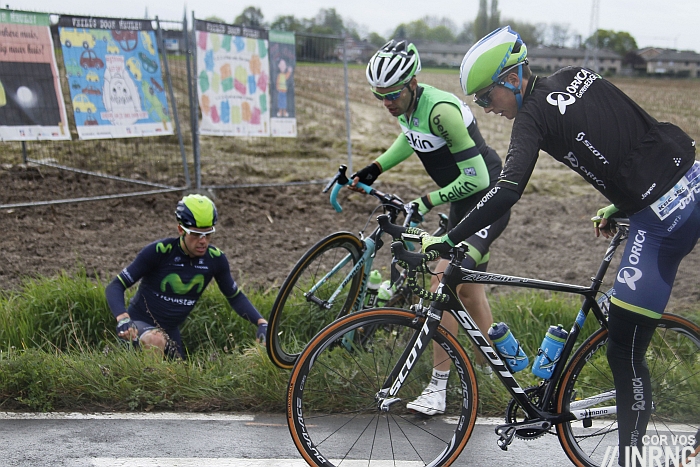 An early crash in the Tour of Flanders, long before anyone reached for a “finish bottle”

But it still matters. We can’t reduce the street furniture very easily but we can ask why anyone would consume a powerful opiate during the final hour of a race. It’s not banned in competition but it is on the World Anti-Doping Agency’s monitored list. Here’s WADA’s explainer on their monitoring programme:

Laboratories will report the instances of reported use or detected presence of these substances to WADA periodically on an aggregate basis by sport and whether the samples were collected in-competition or out–of-competition. Such reports shall not contain additional information regarding specific samples.

WADA shall make available to International Federations and National Anti-Doping Organizations, on at least an annual basis, aggregate statistical information by sport regarding the additional substances. WADA shall implement measures to ensure that strict anonymity of individual Athletes is maintained with respect to such reports. The reported use or detected presence of a monitored substance shall not constitute an anti-doping rule violation.

In short WADA is testing for Tramadol but as it’s not banned, no individual is ID’d and only aggregate stats are reported to UCI, for example the percentage of athletes found with the molecule. Worryingly WADA’s saying it’s being used in cycling. Speaking to cyclingnews.com, Garmin-Sharp medic Prentice Steffen said “The MPCC has gotten behind my request to ask WADA to fast track it from the Monitor List to the banned list. We got a letter back from WADA saying that they were going to continue to watch for it and that they were getting a lot of positive tests for it, particularly in cyclists“. We’ve only got a quote in relation to a letter from WADA so the context of “a lot of positives” is unknown, even one in a hundred tests would be a lot compared to the general population.

Why isn’t it banned?
Because not all drugs are banned. An athlete might need powerful painkillers following a serious injury, for example broken bones after a bike crash. This invites the question of Therapeutic Use Exemptions, if an athlete is in serious pain following an injury then by all means do the paperwork, get the TUE letter, and use the painkiller. But if an athlete needs such a powerful drug then surely they’re in no healthy state to race?

Indeed this seems to be the approach that’s being taken as the MPCC teams ask for it to be banned. The MPCC is a group of teams and others looking to go beyond the WADA Code. Sometimes mocked the group has actually achieved plenty, for example it’s behind the “no needles” policy in pro cycling and it tests cortisol levels as part of a “health check” which stops many resorting to cortisone abuse. This cortisol test is a good idea but also an mirror for Tramadol testing. Again if a rider needs to take cortisone then they probably need to stop racing and rest, an identical argument applies to anyone who needs to take Tramadol.

The MPCC teams have agreed not to use it but I don’t think they test for it so there’s no way to prevent its use. There are 11 World Tour teams but that means seven outside. It doesn’t mean the seven are using it either, for example Team Sky have backed a ban for Tramadol and a recent Humans Invent podcast reported that Geraint Thomas wasn’t using as he rode the Tour de France with a fractured hip.

Safe dose?
Even if it’s not banned it doesn’t mean it’s safe. Bear in mind that those willing to take pharmaceuticals will often exceed the dosage; to make the point look at widespread EPO use in the peloton which, when it was undetectable, saw wild consumption. If medical advice says take two pills then someone will take three and another will take four or even six.

Note: if so this could be pure placebo given ingested Tramadol typically needs one hour to start acting and even two or three before it reaches peak levels in the blood stream

Conclusion
It might be a contributory factor in some crashes but so are many things from fatigue to weather to street furniture. Maybe tram lines are more dangerous than Tramadol? Crash risks are hard to quantify so let’s put talk of accidents aside. What’s more certain is the first order side-effects of such a powerful drug, from nausea to addiction and that if you need a painkiller this strong then you probably shouldn’t be taking part in a bike race.

This is a drug to be avoided wherever possible and reserved only for real analgesic use but it’s showing up in anti-doping control samples. It seems like it’s only a matter time until it’s banned by WADA. What if the UCI ruled first?