Who is the better rider, Peter Sagan or Alejandro Valverde? It’s topic for a café chat but they can and are ranked arithmetically by the UCI and Valverde topped the rankings for 2015. Now cycling’s governing body is launching a new rankings system f0r 2016. Released by stealth with a Christmas Eve press release it’s got little coverage since.

Still, points can be the currency of the pro cyclist’s jobs market and the ranking system often matters to teams and fans alike. With this in mind here’s an explainer along with tables listing all the points to scroll past. There’s also a warning about confusion because if the UCI is launching a new ranking it’s also keeping an old one and they’ll both have similar sounding names.

Let’s begin with the name of the new system: the UCI World Ranking. Not the World Tour and this matters because it’s meant to be a universal system for all male riders rather than just World Tour riders. So it’ll now feature every rider to win a UCI point around the world from any UCI races.

Points scale: here are the points per race grabbed from the UCI rulebook which explains the less than great presentation but all points are going to be listed here for the sake of completion and reference. If you’re in a rush, scroll to the “Analysis” heading after the data dump of tables. 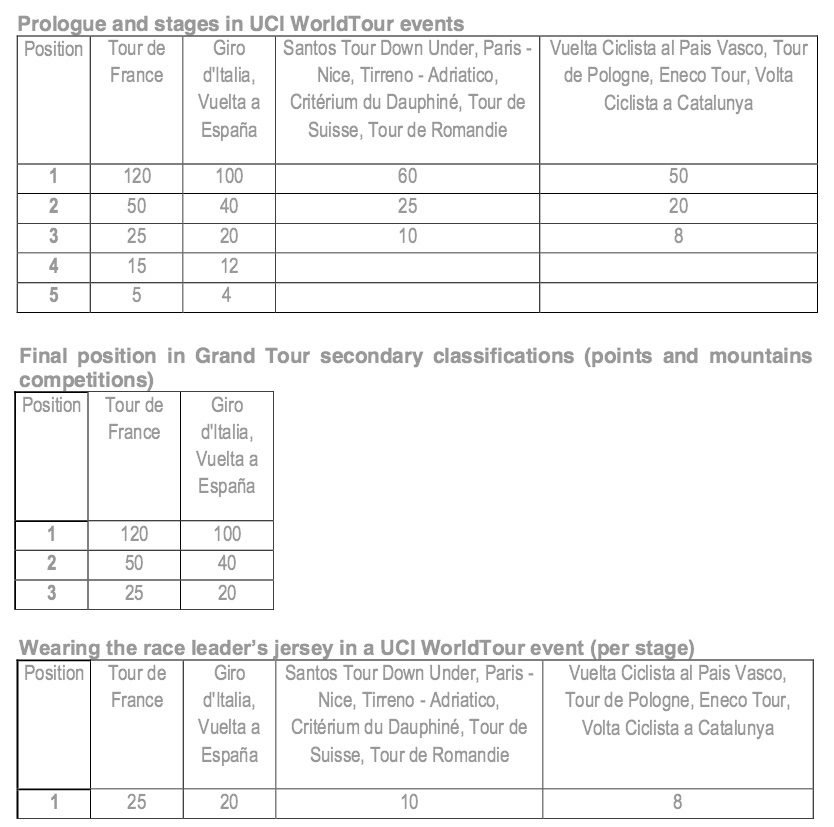 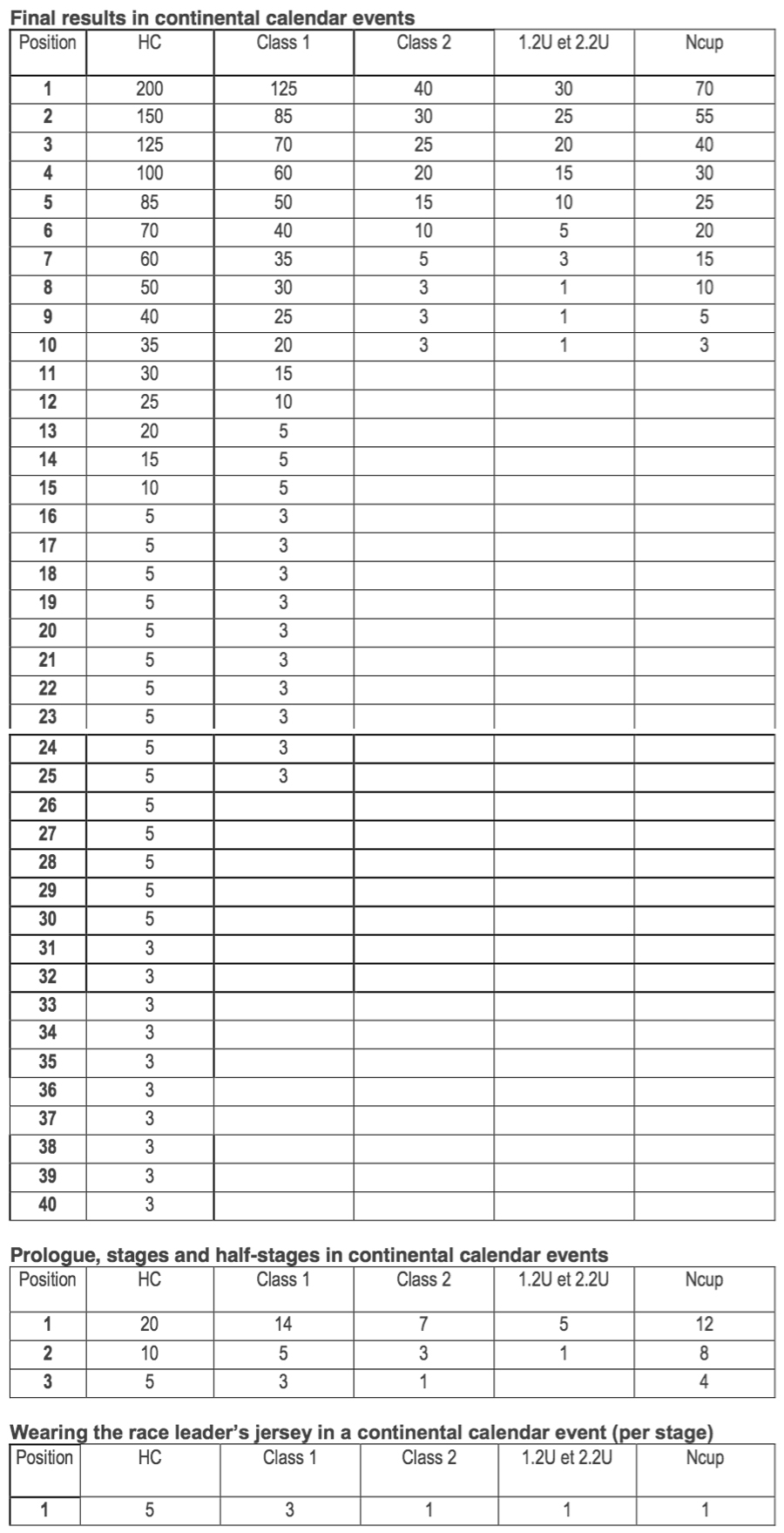 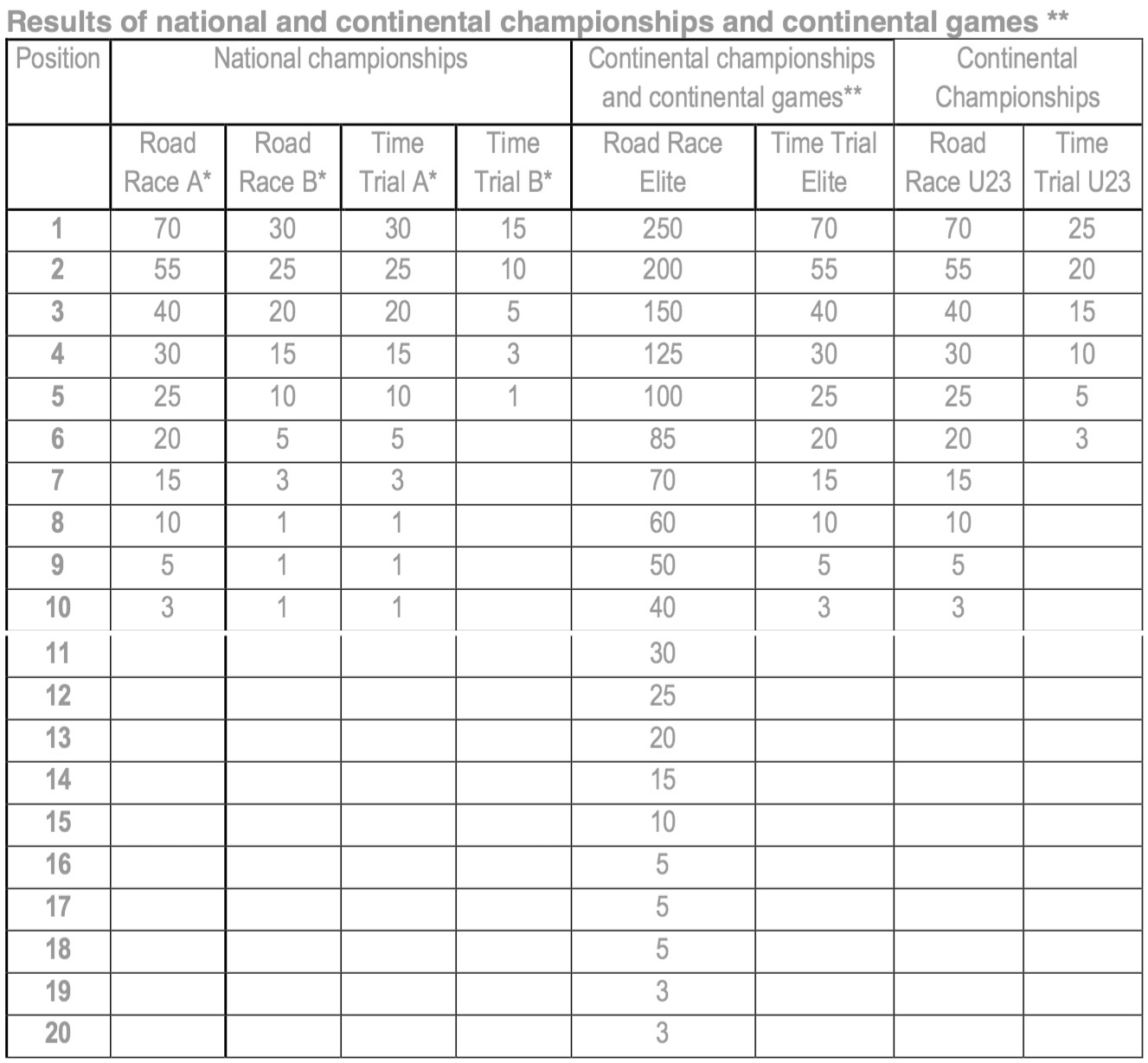 Analysis
Which races? From the World Tour down to any *.2 race, plus U23 *.2 races and national and continental championships. In short everything on the UCI’s road calendar with the exception of criteriums ( marked CRT).

Weekly updates: the rankings will go out every Monday once the UCI has added and subtracted the results for the past week.

National rankings: as well as the individual classification there will be a national one based on the best eight riders per nation.

Rolling basis: one big change is the rolling calculation. It is based over a 52 week period rather than the calendar year, or at least it will be once it’s been up and running for a year. It means the scores are not reset at the start of the season. If a rider doesn’t score in a race they’ve previously won or placed well in then they’ll drop down the rankings like Peter Sagan off La Rochette.

Points per race: another significant change is the attribution of points. The Tour de France remains the prime race. This is good because the Tour is the biggest race and pretending the Vuelta is worth as much would only devalue the system. It works on a second level too because the Giro-Vuelta double is more amenable that the Giro-Tour or Tour-Vuelta combos, just as Fabio Aru who placed second and first in the Giro and Vuelta and collected a lot of points for it but should he be ranked superior to a Tour winner? Yes because he collected more points by racing two grand tours and no because he’s probably not yet at Froome’s performance levels. Rankings may be official but they’ll always be subjective.

As well as the Tour’s pre-eminent position you can also see two tiers of World Tour races where some stage races and one day races win more points than others. It’s a bit of a head-scratcher when the winner of the Tour Down Under earns 500 points while Tour of the Basque Country is worth 400, or Gent-Wevelgem is valued more than the E3 Harelbeke. It’s here that the points system looks like it’s trying to put a value on races that are harder to quantify given the calendar has a rich mix of races each with their history, prestige and importance and trying to label them with a set tariff points makes them look homogeneous on paper when in reality they’re not.

A win in the World Championships road race is worth almost double (600 points vs 350) than the time trial. It’s also more valuable than any other one day race on the calendar. Debatable perhaps but given the UCI owns and promotes the Worlds it’s inevitable. In the same sense the UCI derives most of its legitimacy from the International Olympic Committee and a large share of funding too so the Olympics will always come with a bumper points haul.

Long tail: previously you had to place in the top-20 overall in a grand tour or the top-10 for every other race, now points go down to 60th place. As the chart above shows the winner takes all, points go to the very best riders rather than for finishing the race with a steep slope through the top-10 overall.

However if winning the Tour de France and Worlds brings in a lot of points, the system is not necessarily tilted to star stage racers and one day superstars. Win a stage of the Tour de France and you collect 120 points, win an HC-level race like Dwaars door Vlaanderen, the GP du canton d’Argovie, the Ride London Classic, the GP Fourmies, the Primus Classic Impanis and you get 200 points. Win these five races and you’ve got 1000 points, equivalent to the Tour. So a sprinter taking several HC wins can thrive, the same for a punchy rider who, in late September, can try hilly HC races like the Giro dell’Emilia, the Tre Valli Varesine, the Giro del Piemonte and Milano-Torino and potentially come out with as many points as they’d take from the Giro. Points per jersey: new for 2016 is the reward for winning a points or mountains classification at the end of a grand tour but the reward is modest: the same value as one stage win and equivalent to finishing 11th or 12th overall.

Points per day: another novelty is the daily “rent” earned by a rider wearing the leader’s jersey. Wearing the maillot jaune or maglia rosa jersey for a few days can be transformational but it’s only worth a few points here and this makes sense as a long spell in the jersey, for example Chris Froome’s 15 days in yellow last year would earn him 15 x 25 = 375 points, plenty already.

Rankings and Rantings: if you’ve made it here you might have an understanding of the new system only beware the UCI has decided to keep the World Tour rankings too. So we will have a UCI World Ranking and a UCI WorldTour Ranking, each with very similar sounding names which is bound to confuse. Imagine if tennis issued ATP rankings and ATPP rankings too. Of course they wouldn’t do this but cycling somehow does.

The old system remains the same with blank scores for everyone on 1 January and the same old point scores. This will add to the muddle with 200 points for the Tour de France in the WorldTour Ranking system but 800 points in the World Rankings.

Priority? Will the new UCI World Ranking take over as the top ranking system? Ideally it would given the dynamic rolling calculation and the global aspect that covers all the pro races. But it’ll be compiled every Monday while the UCI WorldTour Ranking goes out on a Sunday which means it’ll be cited more often and probably get flashed up on screen after a race meaning several million TV viewers will see it while comparably few will visit the UCI website or the cycling news sites to check Monday’s updates.

Summary
We’ve got a new rankings system but we’re keeping the old one too and both have similar sounding names. Confused? It’s almost as if you’re supposed to be. The new UCI World Ranking is a good idea as it ranks all male cyclists around the world from their results in all races. It brings new features like extra points for winning the points or mountains competition in a grand tour as well as points for wearing the leaders jersey every day in a stage race. It’ll be a usual reference but could struggle to take off as a talking point for the general media and casual followers because the older WorldTour Ranking will be published ahead of it.

For all the quantitative analysis and arithmetic, a good rankings system has to feel right, to reward champions rather than calculators. Indeed a ranking system in cycling is always awkward, what makes the sport so good is the contests on the road rather than tabular points lists. Any rankings remain primarily an exercise in arithmetic, a handy tool for analysis rather than a goal in themselves.