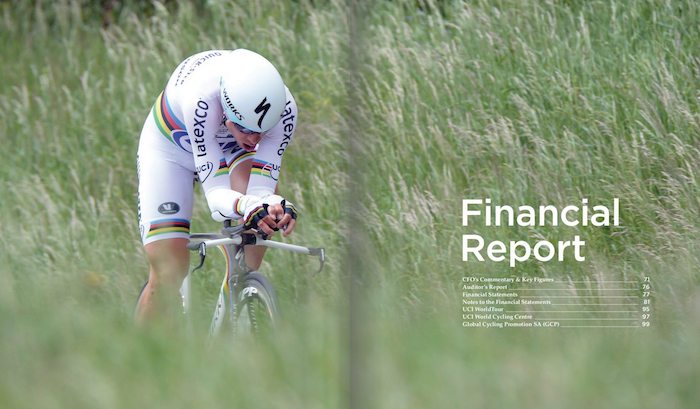 The UCI published their annual report and accounts for 2014 the other day and there was too much going on in the Tour de France to pore over the finances of the governing body. Now it’s worth taking a look to see where things stand.

First up is the new finance director, the wonderfully named Jeremy Conrad-Pickles who forms part of Brian Cookson’s British entourage after a large clear out of staff, including former FD Alain Siegrist. In his annual review there are two noticeable reports:

Revenue for 2014 was CHF 33.4 million, almost identical to the previous year. As the screengrab from the report shows above the UCI gets its money from a variety of sources. Broadcast rights comes from the events it owns and promotes, namely the world championships. Olympic revenues see the International Olympic Committee share out some of its money to governing bodies and the UCI gets a big pot which it spreads out over each year of the Olympic cycle to the tune of CHF 3.1 million a year. 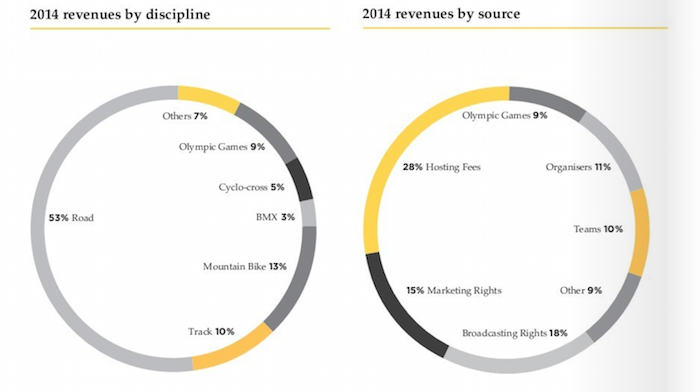 The two charts above show where the money comes from. As you can see road cycling accounts for half of the annual income. It’s easy to associate the UCI with the World Tour, Pro Conti calendars and the top women’s races but of course there is a lot more beyond road cycling. Still road cycling is vital to the UCI and the Ponferrada world championships appear to have brought in CHF 11.3 million, the single largest source of income for the UCI. This sum is split between the hosting fee, TV rights money for the week of racing and sponsorship sales with the hosting fee charged to the organisers the largest of the three ahead of the TV deal. The importance of the Worlds to the UCI’s finances can’t be underestimated.

The table above shows the split of the UCI’s organisation activities, for road this is essentially the World Championships. It earned CHF 11.4 million and appears to spend about CHF 3 million on the events leaving it with a tasty CHF 8.4 million. Overall it earns CHF 21 million from competition revenues and ends up with CHF 11.2 million, a margin of over 50%, impressive compared to the 20-25% margin earned by the likes of ASO and RCS.

New for 2014 is the split between “competition” and “governance”, not exactly an exciting revelation but it allows the UCI to distinguish between race-related money and funds for running the sport. 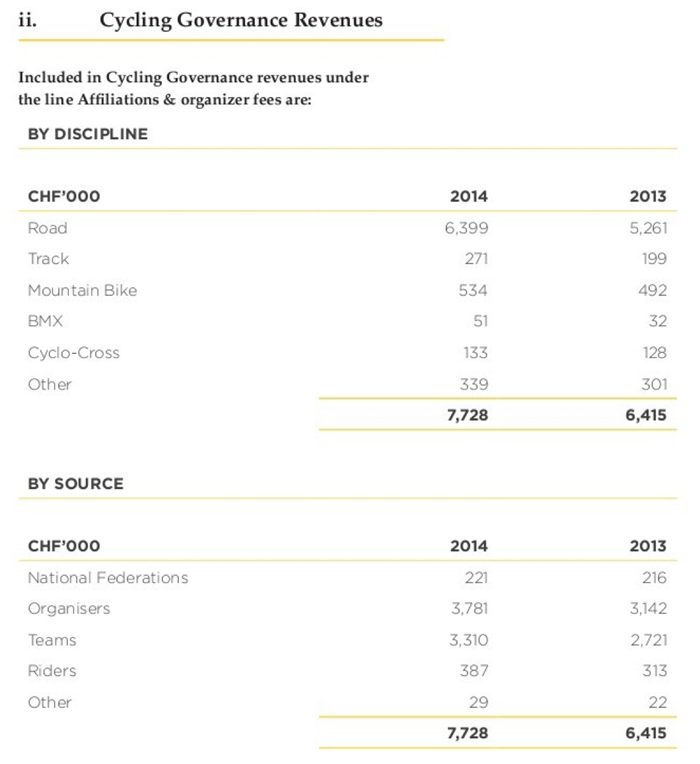 As you can see in the table above road cycling provides most of the governance money. Note the World Tour finances are separate, we’ll come to them in a minute.

How much did the CIRC cost? CHF 2.25 million. The table above segments the expenditure. Value for money? That’s subjective and the accounts don’t rule on that, you will of course have your own opinion. 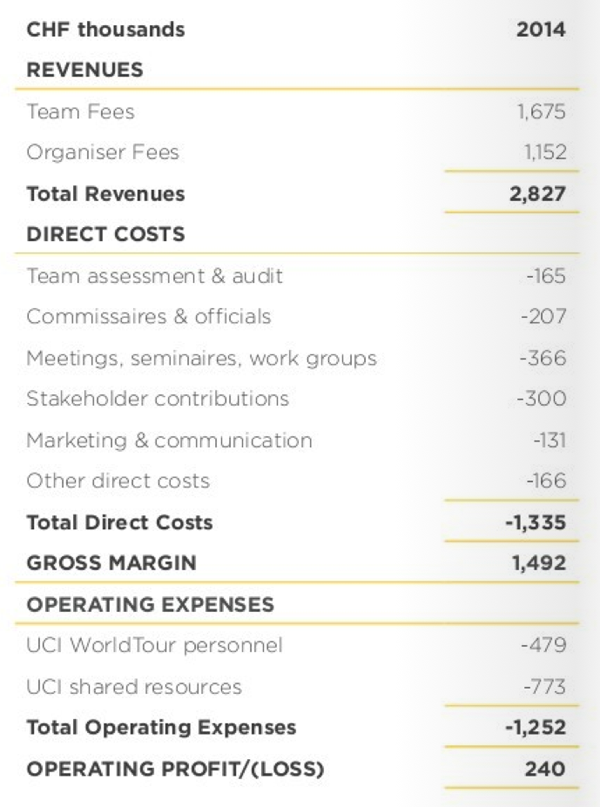 World Tour: During the scandal over Astana’s World Tour licence there are comments floating around that the UCI could not afford to reject the team because of all the money it makes. As the table above shows it collects CHF 1.6 million in fees from teams, divided by 18 that makes CHF 90,000 per team, insignificant compared to the reputational cost of doing the wrong thing. You can see the cost of licencing the teams, a large part of this comes from hiring accounting firm Ernst and Young to review the team budgets.

The UCI is closing down its race promotion arm Global Cycling Promotions. It was supposed to be a money-spinner for the UCI but often ran at loss and the 2014 accounts show more money gone, a loss of CHF 58,000 after the final edition of the Tour of Beijing.

Doping pays: the UCI took CHF 0.9 million in anti-doping fees from rumbled riders, up 300% from the previous year. Answers in the comments if you know who paid this. The UCI pays out CHF 1.1 million a year to the Cycling Anti-Doping Foundation, the “independent” anti-doping body of the UCI… obviously the CADF is dependent on the UCI for funding.

Non profit association: a reminder that the UCI is an “association” under Swiss law which better translates as a charity. This means it has a non-profit status and with it comes tax perks for the governing body and its staff.

Conclusion
Read the full report for yourself if you want to get the full picture of what the UCI did in 2014, this has been a summary look at the money so you don’t have to.

2014 saw a new finance director but similar numbers, the UCI remains a healthy and stable governing body. It has a regular income from the Olympics and the road cycling World Championships are its single largest revenue item and by a long way too. How long until team managers want a slice?

Cycling’s governing body is not changing much on the finance front, its revenues and costs look stable. Having tried to be more entrepreneurial in the past with the Tour of Beijing this activity is stopping. The annual report says World Tour reforms are still on track for 2017 but we’ve not seen much more.