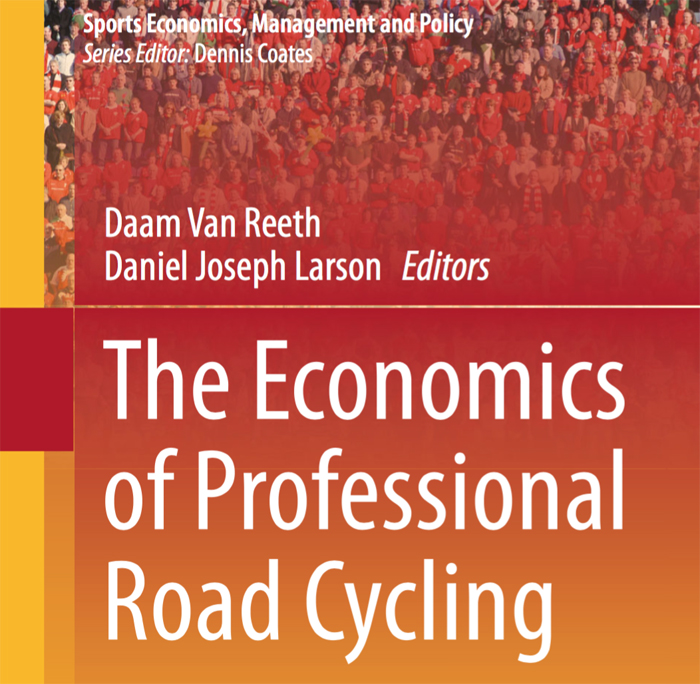 Money makes the wheels go round and this collection of academic papers is a study of the business and economics of pro cycling covering topics from revenue sharing to exploring how many, or rather how few, actually watch the sport on TV as well as the Game Theory of breakaways versus the peloton. You won’t read this for distraction and escapism yet the analytical detachment means this brings a fresh perspective on the sport that makes it a compelling if serious read and a useful reference if you want to explore this topic. Just know from the start that this an academic journal and priced high.

This is a collection of academic papers with different subjects from measuring the TV audience, anti-doping to sponsorship analysis. A chapter on TV audiences sets out just how hard it is to know how many people watch a bike race. There are boasts of billions watching the Tour de France but catching a 12 second clip on a news broadcast is not the same as an audience watching the race live. According to Van Reeth as little as six million people across Belgium, France, the Netherlands, Denmark, Spain, Italy, Australia and the UK could be watching the Tour de France live on a midweek sprint stage with an equivalent audience for the rest of the world. For all the boom in the US, UK and other anglophone nations the combined growth in viewers remains a fraction of the drop-off in the wake of German TV’s withdrawal; the resumption this year of Tour coverage is tentative for now.

One chapter looks at the roles of rider agents and is a factual and legal analysis of the current situation with intel on the typical rates charged and the roles of agents including a matter-of-fact take on the regular rulebreaking of UCI-registered agents.

Another chapter is more analytical as it ventures an economist’s take on race strategy, essentially the Game Theory of cycling tactics with explorations of “backward induction” and “Nash equilibirums”. Even scenarios when we think there are no tactics, like a time trial, have strategies in place. After all most riders in a TT stage of a grand tour is it as an active recovery session or a pacing effort to beat the time cut while we’re normally worrying about the strategies of the few trying to win the stage or contain their losses on GC. Still for all the analysis, reading this chapter doesn’t offer fresh tactical solutions, it simply provides a structured explanation of cycling tactics, even an algebraic framework.

One strength is the leap away from the sport and the use of analytical tools normally applied elsewhere. For example how do we measure team performance in pro cycling, an individual sport practiced by teams? It’s rare in sports but step back and just the same problems apply to other domains. Just look to politics where a individual candidate must win a presidential election but relies on a campaign team effort; to finance where a fund manager may outperform the market aided by research from colleagues. As other fields matter more they’ve been studied more and these tools can now be applied to cycle sport. This doesn’t bring magic results but it provides a feast of food for thought.

It’s also a manual you’d give to an alien who wanted to know what bike racing was about once they’d grasped there’s more to it than the fastest rider between the start and finish. At the same time this is analytical in the way you could break a 747 Jumbo down into its constituent parts: you’d understand things about fuel injections, upholstery and gas turbines but it’s not the same as watching in awe as 425 tons take off nor hitching a ride. As you might expect the theory can trump practice, one part of one chapter to improve anti-doping exploits rational Game Theory concepts but relies on assumptions that are, to be generous, optimistic. Still it’s a clever idea and good to explore. But this is rare, most of the journal seems sensible and highly practical.

The Verdict: if like your cycling literature as a means of escapism then avoid. This is dry, academic and loaded with data, jargon and analysis. That’s the very brilliance of this, a full house of analysis and research on the pro peloton that’s often so packed with detail you’ll read a page and then read it again in order to help soak in the content. Some chapters flow better, this is not a page turner for the beach and it stands as a useful central reference for all the sources it cites, this blog will be mining it for months. It’s of interest to anyone who wants more on the business topics of pro cycling and a vital tool for those working in this field. In fact it’s almost reserved for this kind of audience as it’s priced for university libraries and professional subscribers and a single copy will cost you close to €140 and the ebook is €110.

Sports Economics, Management and Policy is a journal published by Springer, www.springer.com/series/8343

A PDF of this was sent for review. More books reviews at inrng.com