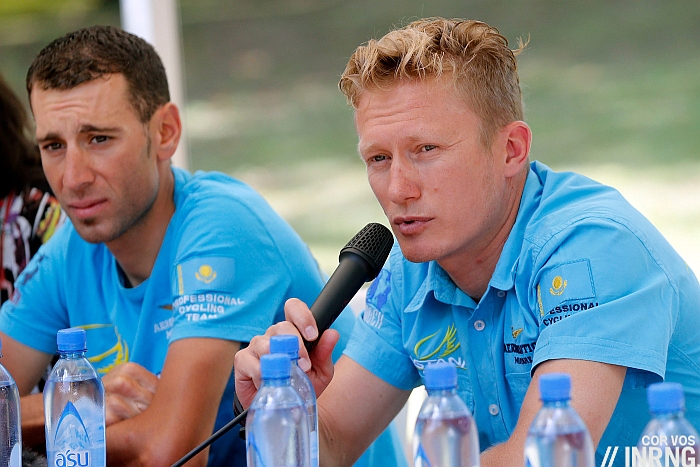 The UCI have published the Licence Commission’s reasoned decision to let the Astana team ride on. It confirms last week’s speculation that whatever trouble the team was in was related to softer, cultural issues rather than anything dramatic.

A quick reminder that the team’s 2015 licence was made conditional on an audit by Lausanne University (ISSUL) and that following the audit’s conclusions in February the UCI asked its Licence Commission to review the case and remove the team’s licence. Following hearings in March and April the Licence Commission rejected this and gave Astana permission to ride on. Now we know why as the reasoned decision has been published. It’s in French-only for now.

The UCI seems to have been spurred to action by the audit’s reports of poor management culture. All those hoping the audit would reveal fridges stocked with EPO vials are set for disappointment because this is a softer thing, a sociological study rather than a police raid. The reasoned decision makes reference to four faults:

What this means in practice isn’t spelled out, exactly how these issues arose and what they meant isn’t in the decision. There are other references to language issues with the Russian speaking members of staff and thinking aloud it could be that some Italian coaching staff have issues communicating with the Kazakhs on the team. Trivial? Perhaps but this can be a pathway to doping, the whole point of the ISSUL performance criteria is that if riders aren’t getting the support they need then there’s a good chance they’ll turn to sources outside the team. A rider told to perform but not supplied with coaching support could turn to doping.

Elsewhere the management culture is described as “à l‘ancienne” or old school where some bosses are too powerful and roles are not clearly defined. Again this isn’t defined but imagine, say, Vinokourov picking teams for races despite not knowing the recent training data of riders or a directeur sportif suggesting training sessions to riders despite not being a qualified coach and the team having its own coaching staff already. And that’s it, this is no smoking gun report that unearthed something disgusting, just that Astana’s had problems with its management culture.

Seek and you will find
In fact audit many teams and they’d come up the same. For years professional teams have sat at the top of the sport while been run along the lines of a family business. The model has been for an ex-pro to launch or takeover a team and take their experience of racing into team management. Now it can bring plenty but it also means missing a lot. It’s like expecting a factory worker to run the show, handle the finances, seek investors, hire staff and run the legal department all within a year or two: an ex-pro can’t run training camps, call tactics from the team car, seek new sponsors and oversee the budget.

Swiss Timing?
One of the odder parts of the reasoned decision is the Rumsfeldian “known unknowns” part where the Licence Commission says had it known what the ISSUL report concluded when it was reviewing the team’s licence last August then the team might not have got a licence for 2015. This is on the grounds that the team was pretending to be well-organised when in fact it had some big flaws. But the Licence Commission has revised its Swiss law (the UCI is based in Switzerland) and the obvious principle of proportionality. This means that for all the sloppy internal culture stopping the team mid-season would be too disproportionate a hit. The principle of proportionality is reasonable but varied justice according to timing isn’t.

The UCI has some explaining to do
Cycling’s governing body told the world back in February that it had found something so horrible that the team had to stop:

“the UCI strongly believes that it contains compelling grounds to refer the matter to the Licence Commission and request the Astana Pro Team licence be withdrawn”
UCI Press Release, 27 February 2015

This wasn’t suspending the team for a week nor calling for a couple of team staff to be sacked, this was the governing body saying in public that the audit had thrown up something so grave the entire squad had to be taken down. This was compounded by the dark reference to the Padova investigation in the same press release. With fans already having a dim view of the team this just encouraged the already widely-held view that the team was suspect. This wasn’t just a cyclingnews forum conspiracy theory, it was the governing body.

Only as we’ve seen it relates to softer cultural issues about staff qualifications and language barriers rather than blood transfusions and criminal practice. Still these things matter and if the Licence Commission says revelations were enough to justify a review of the licence, the criticism here is one of presentation, that the UCI said the team had to be stopped but didn’t explain the ISSUL criteria and in the vacuum many thought something directly related to doping had been found.

Update: on Wednesday L’Equipe has an interview with ISSUL’s Olivier Aubel. It’s worth sharing a some issues. “You’ve got to understand ISSUL isn’t an anti-doping organisation” says Aubel, “instead our work is to analyse how the management of a team increases or not the risk of doping.” ISSUL will be monitoring Astana and submit three more reports on 19 June, 10 August, 10 September. When the ISSUL and the UCI wanted eight teams to trial the scheme, Astana refused. The irony is that they’re now dependent on compliance and Astana’s case has helped develop and advance the methodology.

Conclusion
Astana ride on and the decision says one mistake and the whole team’s future could be in jeopardy. Many followers had associated the word “audit” with some kind of swat team to check every cupboard and bank account but that’s not what the ISSUL audit was about, it’s a soft approach towards cultural issues. That Astana wasn’t very good with these things is obvious but it’s been given another chance, especially as pulling the plug on the team mid-season would have been a heavy price to pay for the relatively small faults reported. Small but significant, Astana could have lost its licence before only now the Licence Commission says they’ve changed internal practices with improved rider supervision, clear job demarcation and operational novelties like an IT platform to upload training files. With ISSUL it’s the little things that count.