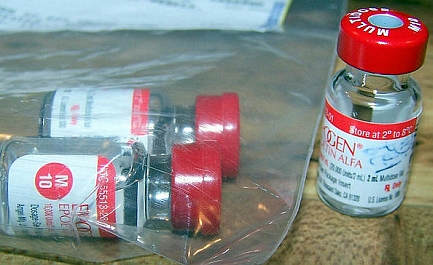 News that the athlete bio-passport isn’t foolproof has been doing the rounds after France Télévision’s Stade 2 show took some athletes, “microdosed” them with EPO and their values didn’t ring alarm bells on the AMPU bio passport system.

News? Actually no it’s been set out in academia since 2011 and in the same year Italian pro Leonardo Bertagnolli was telling the police just the same. Still since the report has got some traction so here’s a quick look at the issues.

You can see the report in French on youtube where they take eight athletes and under medical supervision and with WADA approval they dose them with a range of banned substances from EPO to blood infusions and growth hormones. As a result performance gains are noted and the changes appear within the safe parameters of the bio passport.

As a reminder the bio passport is a record of an athlete’s haematological parameters. A variety of measures are taken when a rider is tested and these are all logged into a database and over time a “longitudinal profile” is established. Unlike the binary positive or negative of toxicology testing where a lab tests for banned substances, the passport looks at changes in levels, using logic and mathematics, for example Bayesian statistics, to look for anomalies. Here’s a screenshot of the passport software showing the athlete values fluctuating in blue between the red lines:

As an explainer “microdosing” means taking small doses of EPO, often intravenously. Intravenous use means it is hard to catch a rider positive, they have to be rumbled right away as it reduces “glowtime” or the period which the molecule can be detected in a test compared to the normal subcutaneous route (it’s depressing how you learn these things) and this is one reason why the CIRC report raised the idea of night time testing, to track the most suspicious riders and maybe catch them before they stop glowing. Microdoses mean small doses and the idea isn’t to take small amounts so as not to test positive but instead to achieve gradual changes in blood values rather than big swings which will trip the passport. Menchov: one down, more to go

Short term vs long term
One big problem with a 29 day evaluation on TV is that ignores the way the passport uses Bayesian statistics. A TV guinea pig could record values within the pre-set range but over time it’s possible they set a pattern which later makes their earlier numbers look odd. It’s this kind of long-term testing which means a rider might not trip the alarm today but they could be caught at a later date and this reasoning is partially why the UCI took years to open a case against the likes of Dennis Menchov and Roman Kreuziger. It wasn’t that alarm bells rang immediately, it was because some old numbers stood out. This is crucial aspect of the passport but probably too complicated a lesson for a 15 minute TV report. An athlete who passed the test on TV could be busted with time although this is not certain. Again a degree of nuance that a TV report doesn’t have time to communicate. Indeed while saying the data don’t set off the passport look at the screengrab below to see just how close to the red line the athlete gets: 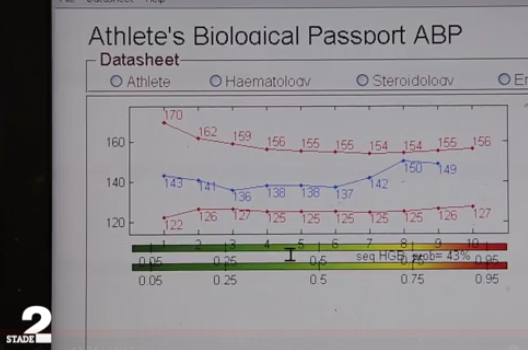 Sailing close to the wind?

Performance enhancers can enhance performance
Another thing with the France Télévisions report was the way participants recorded performance gains. Now talk of performance-enhancing substances enhancing performances isn’t surprising. But this was only a sample of eight people and we don’t whether any of the participants were boosted by the placebo effect of thinking they were faster and stronger and therefore fulfilling this and there’s no baseline training to compare. A more serious study would have random double-blind controls.

Nice idea in theory…
France Télévisions also interviewed Oxford philosophy professor Julian Savulescu who repeated his claim that EPO and other products should be made legal in order to end the dangerous second order effects of prohibition, namely athletes turning to quack doctors and getting poor and possibly harmful advice. The idea is noble in theory but ignores everything we know about the practice of doping in sports: allow some to “dope safely” and someone will dope to dangerous levels. Allow EPO to be injected in approved doses by certified doctors and if some athletes agree, others will “go large” with the dosage only this time they cannot be caught because the substance isn’t banned any more. They’d have to be caught red-handed injecting an unapproved dose. This isn’t conceptual as we saw this with the UCI’s 50% haematocrit limit which theoretically allowed riders to dope up to the 50% limit but in practice some were going to 60% and beyond and then gaming their levels back down for the test. Prohibition might have its problems but the alternatives don’t seem much better.

Summary
The bio passport isn’t watertight. A report on French television with this claim has caused a buzz that’s even stirred some pro cyclists to tweet outrage. But it’s old news. Whether in medical journals or the peloton, the ski pistes and athletics tracks, all of this has been known for many years. Still seeing this reported out loud on a mainstream channel means a bigger audience rather than specialist academics and sports science nerds. In some ways it’s a useful reminder but in others it feels like the report is trying to claim something novel.

The performance gains measured by the TV report might be recorded in a lab but the small sample size and lack of controls were skipped over by the TV report: the improvements are obvious but the scale isn’t so certain. Similarly microdosing could fool the passport once but with more time the passport gets more data and someone could trip up.

Bad science? Yes but Stade 2 is a sports television show rather than a science seminar. It’s a useful reminder that the bio passport isn’t foolproof. The UCI might have won every case it’s opened so far but probably because it’s only gone after the most obvious cases and left some others on the table. We’ll see what time brings. More testing, more intelligence and more money is needed.