The hardest climb you’ve never heard of? The Giro d’Italia has included the Colle Fauniera sparingly and perhaps needs to go back at some point to correct this. For everyone else it’s open all summer and is one of the most spectacular climbs in the Alps.

The Route: there are three ways to the top but this is the route up the Valle Grana from Caraglio through Pradlèves and onwards, the route used by the Giro d’Italia in the past. On a map, or with road signs, it is the SP23, SP112 and the SP333. From Pradlèves it is 22.4km long at an average of 7.5% but there are long sections at over 10%.

The Feel: look back for a moment and the plains of the Pianura Padana stretch out like a rumpled blanket with buildings and vegetation the only breaks on the horizon. Then look forward again and you have to tilt your head up to see the peaks across the horizon ahead. If some climbs start in the mountains, this road sees the rider approach from the flat plains. It’s a perfect start: gentle and lazy as you pass kiwi orchards and signs for farms selling cheese. The Slow Food movement was born down the road and everything feels languid.

Slowly the valley closes in and after the village Pradlèves – “city of cheese” boasts a sign – you climb up a river gorge, the road taking the route cut by the white water. 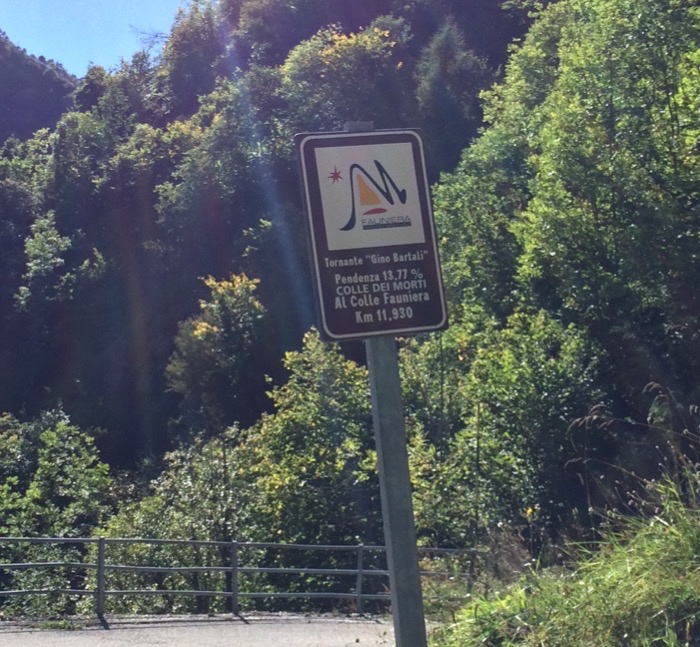 There are signs for cyclists to indicate what the next kilometre will bring. It’s round the Gino Bartali hairpin that the road rears up and the surface deteriorates. The 13.77% slope – such precision from the sign – is steep enough but the crumbling road surface forces you pick your way, making it harder still.

Onwards and the approach to the village of Chiotti is one of the hardest sections, the double-digit gradient is obvious. Above is the Santuario di San Magno and a brief flat section, just enough time to eat and drink. After a few buildings the road shrinks in width and it’s back to 10-12% slope, now with added altitude.

If the gradient and altitude won’t slow you, the rasping road will

A tough gradient and the altitude aren’t unique but what makes this even more of a grind is the road itself, its surface is rasping like a cat’s tongue at best, cracked and crumbling elsewhere which robs more energy and why it feels harder than the Stelvio or Galibier. The views are worth it, green pastures sit below huge towers of rock and this is a spectacular landscape with an enormous sense of space. You can look back down to the plains below though the path you came up, another world down below. Take a moment to enjoy these views on the way because the views at the top of the pass aren’t so good, the road is cut into the rock. The top of the pass comes into view, a visible finish line from afar and helpfully the slope eases allowing you to finish with a flurry. At the top there’s a small car park with a large memorial to Marco Pantani. Stop for the memorial but if you want better views keep going for a moment.

Descend and you’ll find rough sections and loose rocks but in no time you’re back below the treeline in comforting woodland that is several degrees warmer. The effort from before is only a memory. Was it really that hard?

The Verdict: if you scored climbs by their challenge, scenery, altitude, calm and other factors then the Fauniera could well be Europe’s best but it’s a subjective matter, up to you to work out your priorities. This climb is wild, there’s no ski resort at the top, in fact there’s little in the way of amenities, just a road and even that is crumbling in places. But the length of the climb and its altitude make it majestic because they’re a means to an end, once beyond the sanctuary of Castelmagno the landscape turns spectacular, it’s almost a climb you don’t want to finish because once the pass comes into sight the adventure is over.

The History: the Giro had to wait until 1999 to climb this. It’s not as if the road was a secret but year after year the race skipped it. Were they afraid? It turns out they were and the race only went up once the descent had been improved says Daniel Friebe in Mountain Higher. It highlights how races return to familiar ground and there several major climbs that the Giro has yet to visit, the Nivolet for example.

When they did visit in 1999 it was spectacular and riders, many with blood as thick as ketchup, were floundering. José Jimenez tried a big gear attack halfway but cracked and fell to pieces losing double-digit minutes. Laurent Jalabert surrendered his maglia rosa and Marco Pantani ended the day in pink but was later to leave the race red-faced after failing his haematocrit test, leaving Ivan Gotti to win a second Giro. Arguably the Fauniera was the high point of Pantani’s career and what followed after was a long descent.

The Giro was due to return in 2001 but a police raid, branded the “Sanremo Blitz”, saw the stage cancelled in the aftermath. It should go back and hopefully it’ll be third time luck for a happy ending. But when? There’s no ski station to bid for the finish so it depends on the local towns nearby bidding for a stage finish and if they do pay up the mountain will take all the glory. 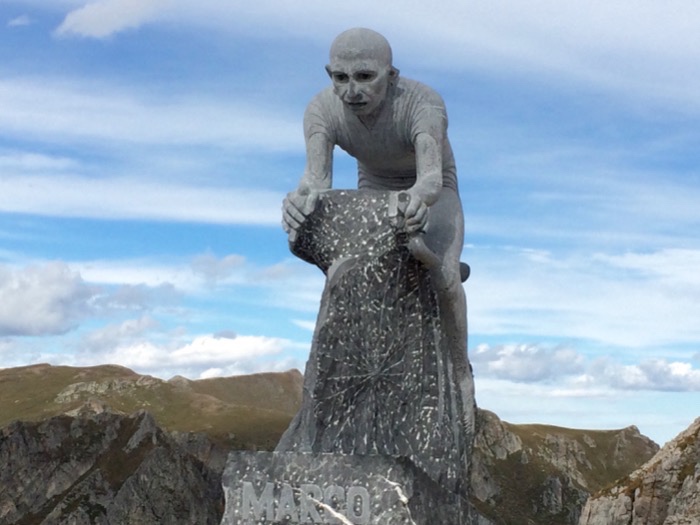 Pantani Memorial: sometimes it seems the old rule of building a chapel on top of a hill in Italy has been surpassed by a new one where they erect a Pantani memorial. It’s an exaggeration of course but there are molto memorials. This one is haunting for the dark eyes and grey stone.

Name: the pass has two names, the Colle Fauniera but also the Colle dei Morti, the “pass of the dead”. The mortal version comes from a battle a few hundred years ago in the area while the rocky peak of the Cima Fauniera nearby provides the other name. Today both are used interchangeably by locals.

Climb up and there’s also the Colle d’Esischie and the Colle del Vallonetto along the way. The Esischie is a proper road and is used by the annual Fausto Coppi gran fondo, an alternative route to the top used once in the Giro too while the Vallonetto is a gravel track.

Travel and Access: Cuneo is the nearest large town with rail and autostrada links and it sits roughly equidistant between Turin and Nice in France. There are a lot of other climbs to do in the area but it can be hard to pick a base. You need to ride far up one valley get a big climb and possibly cross to France and a circular loop for the day is rare.