Book Review: Shadows on the Road

Shadows on the Road by Michael Barry
Timing. Had this come out years ago it could have had the sensational impact of Tyler Hamilton’s Secret Race given it details doping on the US Postal team. But coming out in 2014, long after the USADA report it’s a very different matter.

If the book has generated headlines about Tramadol and race fixing this isn’t a tale of scandal. Most of the intrigue is reserved for the unreported aspects of the life of a pro cyclist, from injury to travel.

Scandal accompanied the book’s launch but this is the story of Barry’s career in the peloton from early days in Canada to amateur life in France and then a pro career. Yes there are doping revelations but they’re just part of what happened along the way. Willie Nelson quipped the early bird gets the worm but the second mouse gets the cheese and Barry’s in the latter camp, this is not a book designed for the shock factor. Even when describing the way Tramadol was given out at Team Sky Barry questions the practice but doesn’t get outraged, just disappointed.

D-word
Let’s tackle the doping to get it out of the way. This adds to the accepted narrative, a script that’s become a palimpsest where everyone says they did not want to take EPO but given its ubiquity they began to rationalise in order to provide the self-justification. Familiar stuff but worth noting is another moment when Johan Bruyneel and Luis Del Moral oversaw his doping:

“Before they left, Luis said that if we ever tested positive, we were on our own. The team would take no responsibility for our actions.”

The media have picked up on some revelations but not all. Here’s an excerpt about Barry’s amateur days in France:

“One rider was unique. His platinum-blond hair contrasted with the brown and black hair of the others. Stockier than the slim Frenchman… His garish yellow-and-red, faded and pattered Vélo Club Saint-Etienne jersey stood out in the group like a flag against the drab countryside.”

The text continues and insinuates the blond amateur was abusing cortisone. Who could this stocky blond rider in a yellow and red St Etienne jersey be? But don’t read this for the dirt, more words are dedicated to broken bones or his time spent as an amateur in France.

Barry has written this himself, no ghostwriter and it’s full of descriptive and often poetic phrases – “lawns were a lush green, full of moisture, yet to be bleached by the summer sun“. He uses the first person plural in the present tense a lot – “We begin to pedal a steady rhythm, cars pass us” – as device to explain not what he did as a pro cyclist but what is done every day by professional cyclists.

The book isn’t chronological ride through Barry’s career. It opens with a prologue about a call from USADA and then Chapter 1 describes a taxi ride to the airport before Barry flies to Doha for the 2012 Tour of Qatar as he experience the same pre-season anxiety that he and others have long felt. Incidents allow him to jump back, a crash in a Qatar is used to describe an incident from the past. It might confuse some but worked for me and ensures the book isn’t a dull list of races and results, it’s more a collection of insights and experiences. 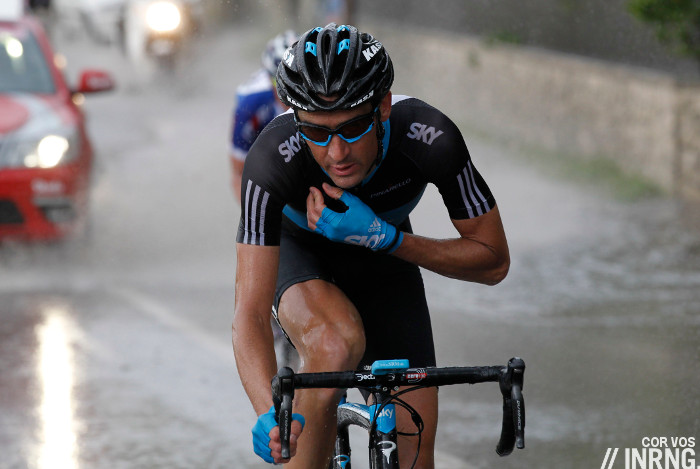 Cycling-only
It’s not a comprehensive autobiography. There’s a mention of Dede and a few pages later he’s been married to her for three years. There’s little on other personal details like tastes and beliefs; there’s the odd mention of prayer and the loss of a crucifix in a crash. As such most of the tales involve moments when he’s wearing team kit and of the ones that don’t, he’s probably wearing a hospital gown.

Reform
As well as looking back Barry makes wider points about the sport with calls for improved health and safety and rider rights but often these aren’t explored very far, he wants courses to be made safer but doesn’t say whether this means excluding urban finishes, bulldozing roundabouts or abandoning the cobbled bowling alleys of Flanders. He quizzes a team doctor about Tramadol use saying if users are advised not to operate machinery, why is it being used to operate a bike and what happens in the event of a crash and a health insurance claim? It’s all valid point but skip a few pages to see him rationalising EPO abuse and telling lies to protect his job. He might quiz the practices of today’s generation but he and his peers surely owe them an apology first?

The Test
Many have formed a view of Barry already. Canadians and Team Sky fans might like him; others angered by the US Postal scandal. Certainly the idea of people cheating and making a fortune, getting a token ban and then topping it off with a book deal is awkward: shouldn’t we all be reading David Moncoutié’s bio instead? So if you don’t like Barry should you read this? Hard to answer and the poetic style and impersonal “we” often means he’s not arguing his case, the book might not challenge your opinions.

At the heart is the message that cycling is enjoyable but turning it into a business means polluting the simple pleasure:

“I no longer saw the sport of cycling as I’d seen it in my dreams. I knew now that it was not played on an even field. I had become aware of the epidemic of doping. I’d learned how races were bought and sold, and I understood now that professional sport was as much a business as it was a sport.”

Note: this copy was sent free for review. It is published by Faber and Faber and available in print and electronically.

Previous post: The Moment the Race Was Won: The Giro