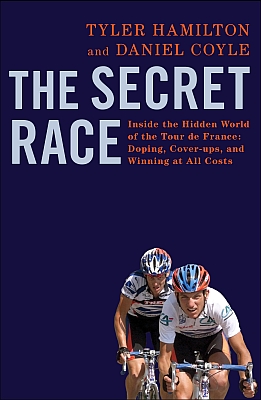 The Secret Race by Tyler Hamilton and Daniel Coyle

This is a guest review by a reader known as The Race Radio on Twitter, the go-to source for information on the USADA action and much more.

“The truth really will set you free“: the last sentence of Tyler Hamilton’s new book is a fit ending. For 300 pages Tyler and Dan Coyle trace Tyler’s journey through the madness of professional cycling during one of the sports most complex times. Coyle’s elegant style allows the story to flow effortlessly through Tyler’s career, capturing the ebb and flow of enablers, teammates, doctors, and DS’s.

Former USPS team doctor Prentice Steffen once said “Unpleasant people like Lance Armstrong dope and nice people like Tyler Hamilton also dope“. In a sport filled with questionable characters Tyler was always the nice guy. Thoughtful, polite, eager to please, Tyler was not the guy you would expect to be in a Madrid gynaecologist’s office transfusing blood to be used for the Tour. Tyler’s pleasant nature is evident throughout his book. While he gives massive amount of details of organized doping programs he spares the individual settling of scores. Even the often erratic, insecure, Armstrong does not come off as badly as he could. Tyler focuses on facts and details instead of character assassination.

There are a couple of central themes. The ease of doping is key. Riders talk about it. Teams support it. Doctors are there to help. It is normal, accepted. Bizzarro World. Far from pushers, Tyler talks of team doctors who gently encourage and enable doping. When it is decided that transfusions are the next step Bruyneel pitches the plan with with ease, nonchalance. Tyler points out that  Bruyneel makes “The outrageous sound normal– it may be his greatest skill“. In his first meeting with new boss Bjarne Riis the topic quickly shifts to how great transfusions are and what his doping program was at USPS. CSC soigneurs eagerly helped with saline transfusions to get his blood values right while a tester waits downstairs. The sport was a frictionless environment for doping.

Another key theme is the sense of being caught up in a whirlwind. Private jets, big money contracts, adoring friends and fans. This environment made it easier to ignore the increasingly irrational Armstrong, the escalating complexity of doping methods, and the challenge of telling the truth. Eventually Tyler is so deep in the lie he sees no exit and continues the charade.

Throughout the book we get a better look at some of the characters of the sport. The investment banker behind the US Postal team Tom Weisel is gruff, demanding results, pushing always pushing. Doctor Fuentes is scattered, chaotic. US coach Eddie “B” Borysewicz is spooked from the 1984 Olympics fiasco and warns riders against “Getting involved in that shit“. Dr Luigi Ceccini is a gentle friend who warns against doping but understands the need to keep the haematocrit high. On the sidelines are the guys who questioned the chaos. Frankie Andreu, Jon Vaughters, Christophe Bassons. All questioned the accepted norm, all were marginalized. Prematurely pushed from the sport.

It is disturbing to see the apparent extent of the UCI’s complacently. I am not a fan of conspiracy theories but Tyler makes a very compelling case for a special relationship between Armstrong and the UCI. The book claims they ignored his doping and did his bidding if the competition got too close. It is perhaps the most disturbing part of the book and warrants further official examination.

I do take issue with the consistent refrain that “everyone was doing it” as if it was a level playing field. As the book explains, it wasn’t level. Fuentes charges $50,000 per year plus large bonuses. Far outside the reach of a Neo-Pro. It is made clear that Ferrari is the best doping doctor there is and the USPS support staff was way ahead of the rest. Tyler’s program rapidly becomes far more chaotic once he leaves the team. In addition there is always the possibility of something new. While on US Postal Tyler had great support but there was always the idea that Lance had more, a higher level program.

Over the years there have been many books on doping in cycling. “Rough Ride” “Breaking the Chain” “Lance to Landis” but none come close to the level of detail that “The Secret Race” gives. It will be essential reading for anyone who wants to understand that era and wants to minimize the chance of a return. Ultimately Tyler captures the essence of his experience “It all happened so slowly and organically. You start out tiptoeing through a little bit of mud and before you know it, you’re up to your neck. If I had known where it would end up, I would have been on the first plane back to Boston.”