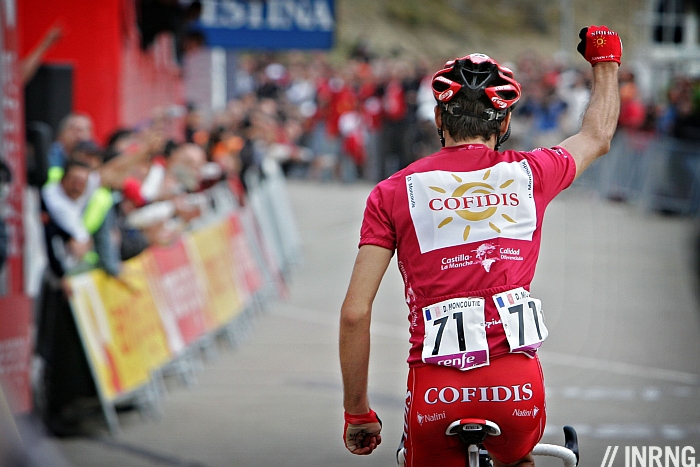 For a long time professional cyclists had one of two blood groups, they were either EPO+ or EPO-. David Moncoutié was one of the minority who avoided the doping culture. Yet he thrived and often beat the cheats.

There’s been plenty of publicity given to the doping and the dopers. Many ask “what about those that rode clean?” and here is the tale of one who did just that.

The book is in French and Ma Liberté de Rouler means “Freedom to Ride”. It might be unusual reviewing a foreign language book but this is an unusual voice, a rider who not only rode clean but lived clean. There’s next to nothing in the way of scandal or shocks, just a linear read through a career from early memories of the first bike through to retirement at the end of the 2012 Vuelta.

You can tell from the cover this a modest affair, a cropped image of a victory salute rather than the fashion-shoot retouch of David Milar’s Racing Through The Dark. This “my freedom to ride” rather than my rock n’roll. There are tales from school to start but two lines on meeting his wife and a paragraph on the birth of two children; even a year living in Paris with a student actress girlfriend is transformed into a training challenge, how to be competitive when you live in the city; there’s little on life in the capital or what he likes to do out side of cycling.

Early life is influential. His mother rejected frequent use of pharmaceuticals and “pas de médicaments” would become a career theme. He’s into his running and football at school but one day goes cycling and takes off on a long solo ride for the hell of it. Why? It seems he’s looking for freedom and pleasure and finds it on the bike.

The Accidental Pro
His father seems keener on pro cycling than him. The two watch the Tour on TV every July but as Moncoutié rises up the ranks – riding an old bike with toeclips and straps – he’s still looking to enjoy himself rather than apply himself. He’s offered a place in a sports school but the idea of spending the winter doing cyclo-cross and velodrome drills is not for him. He opts for university but a student strike sees him blocked from class and so rides more and wins more. Still unsure what to do he thinks about becoming a postman in order to have the afternoons free for cycling. This is not the tale of a man on a mission.

The will to succeed might not be obvious but the talent is. Cyrille Guimard has been tasked with building a top team and takes two neo-pros: David Millar and David Moncoutié. He meets Guimard and Millar and after a VO2 Max test – Mouncoutié only did one in his career and doesn’t know his score – they go to a restaurant. Over lunch Guimard asks him “what are your ambitions” and presumably wants to hear about sporting progress and teamwork but Moncoutié replies “I want to be happy” which leaves Guimard stunned for a moment, half-thinking it’s a cocky joke… but no, it’s true.

His career longevity is impressive and he stayed with the same team throughout. He was part of Cofidis and they needed him too with various doping scandals. The book in fact opens with a preface from the corporate human resources boss and ends with a note from former Cofidis boss François Migraine and the book itself is sponsored by the French credit company. 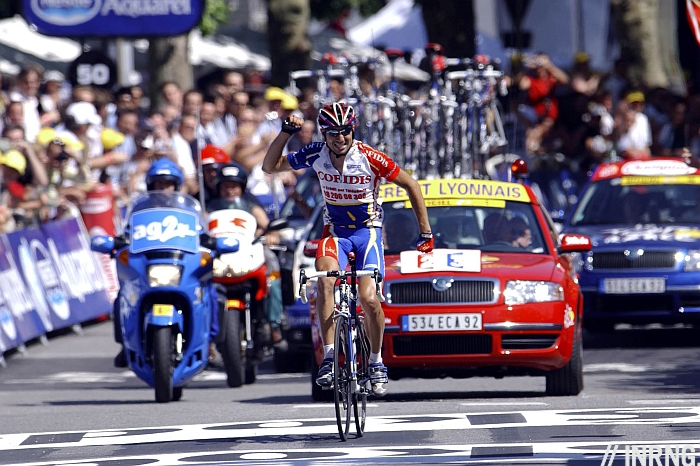 Enjoyment = Ambition
Throughout the book there are two themes: accusations of “a lack of ambition” and his search for freedom and happiness. On ambition he’s frequently accused of being careless and not applying himself, famously sitting at the back of the bunch because he hated fighting for space up front. His reply is that he still had ambition but used it in other ways and besides, his ambition was always enjoy himself and it was the media or managers who invested their ambitions in him by insisting he raced up front. Infuriating or admirable, you decide.

Sometimes he was tempted to aim for the top-10 in the Tour de France but saw the pressures this brought and besides, he knew he could not last three weeks against riders on doping programmes. His 13th place overall in the 2002 Tour is source of pride, especially as everyone above him bar Carlos Sastre has been rumbled for dopage. He could well have stood on the Tour’s Champs Elysées podium if things had been different but more importantly he knows this is speculation so he doesn’t dwell on it. Instead it’s all about pleasure, whether picking off preferred races or riding for the fun of it. His heart rate monitor is stowed in a draw and for years performance measured by times up a local climb and “feeling”.

The Problem with Being Mr Clean
The peloton’s Mr Clean label annoyed him at times, he didn’t want the label because there were others who deserved it too. But also because he feared reprisal from those doping; he admires Christophe Bassons’s outspoken stance but has some criticism too, the “two-speed cycling” where only dopers can win angers Moncoutié because he’s winning clean. He’s also got beaucoup admiration for Lance Armstrong at times, they were briefly team mates and half the peloton thought the Texan was going to die so to comeback impresses him; at a training camp when it’s -5°C outside and Lance Armstrong – bald and scarred – is ready to ride when the others are hesitant. Moncoutié could use the book throw Armstrong under the bus and reverse back him over for good measure but doesn’t, although he clearly wishes cycling’s doping culture never happened.

“my team mates are adults, they can do what they want“

Moncoutié knew he couldn’t change anything so he played the cards he had. He knew what some team mates like Philippe Gaumont was doing but this doesn’t mean he knew what the whole peloton was doing. Even some team mates he assumed were clean get busted. Others he guesses the changes, he notices the mood change in David Millar.

His honesty and ethics aren’t reserved for doping. He claims he never once bought or sold a race and once tried to negotiate a pay cut with Cofidis because he didn’t like pressure of being a team leader. If does get saintly at times but he’s also ready to stick it to some too; one example comes when Laurent Jalabert was critical of him live on French TV and now Moncoutié serves up a cold textual revenge reminding us that he won his all races clean, something that can’t be said for Jalabert.

Like climbing a mountain and descending, the upward trajectory of Moncoutié’s career gets most attention and he clearly enjoyed the wins, reading the book reminds you of his success whether absolute triumph or his relative success, for example posting the fastest clean time up Mont Ventoux. The eventual career decline is covered fast in fewer pages. But he ends on his own terms, in the Vuelta he’s winning stages and taking mountains jersey for years in a row but on his terms, enjoying Spain like a Brit or German tourist: as he goes for evening walks in the stage finish towns, enjoys a dip in the hotel pool and sinks a round of beer with his team mates. Unconventional but by now Cofidis have accepted he just does what he wants. 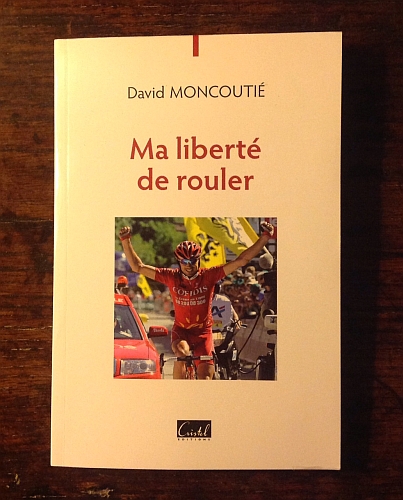 Conclusion
It’s not award-winning prose but this is an informative and at times uplifting read. The tale of “how I won clean” means fewer dramatic devices. There’s no guilt nor gore to write about, none of the self-analysis about the decision to dope nor any Proustian descriptions of syringes plunging illicit hormones into the body. Instead he reminds us that you can and should do it for fun. Moncoutié has the genetic gift to get away with this at the highest level but there’s a lesson for everyone.

Don’t read this expecting a torrent of invective towards the cheats and an “I was robbed” narrative. Moncoutié seems saddened by the direction the sport took but realistic to adapt to the situation and explore the frontiers of what’s possible and pleasurable. You sense he wants to be known for his successes and achievements rather than his ethics but the two go together, he won whilst others took shortcuts and that only makes his success more enjoyable.