Here’s a road that’s almost never raced yet memorable for thousands of European cyclists, from amateurs to the best on Team Sky or Quick Step. Mallorca’s Sa Calobra is a road to ride in both directions and an experience notable for the roads, challenge and views alike.

The Route
The MA-2141 starts in the fishing village of Sa Calobra and climbs for 9.9km at an average gradient of 7.1% to the Coll dels Reis. There is no mistaking the road because, unless you arrived in Sa Calobra by boat, it is the only road in and out of the village.

The Feel*
Sa Calobra is a descent before it is a climb. This is literally so, as you must go down before you go up but it’s also true in spirit. The road is visually spectacular, especially looking down. It offers some amazing views: that first view of the 270 degree hairpin near the top; then the almost endless series of hairpins winding below you; then the views of the sea. You glimpse the sea first in the distance and several hairpins later it’s still surprisingly far below until suddenly the sea is right there and there’s no more road.

The Sa Calobra road turns off from the Pollensa to Soller route, the Ma-10; to get to the turn you’ll have climbed at least 650m, and traversed high along the north side of the Tramuntana range. Turn off to Sa Calobra and it’s another little climb that greets you first; and the climb is a welcome relief—not for the climbing, but because it’s the first south-facing slope you’ll have been on for an hour. You bake pleasantly on the exposed face before tipping over the Col dels Reis to start the famous descent.

The road is an engineering achievement against the odds, down a mountainside with no natural route down; the descent is technical but fast, with no two hairpins the same and some with steep inside lines. The 270 degree hairpin near the top is the highlight visually, but is less special to experience on two wheels: you go from having a rock-face on your right to being exposed on both sides, and the gusty winds can be unnerving as you cross the bridge you’ll pass under in a few seconds.

It’s quiet in February, there are more cyclists than vehicles. On a day in late February there were three cars and a coach to overtake on the way down.

Once at the bottom you face a three-way choice: go straight back up, have a coffee or eat lunch. My preference is for the first or second; there’s too much climbing to come to have a full stomach, but you’ll need an energy bar or banana before you’re home. The climb out of Sa Calobra is 9.9km at 7.1% average; there are plenty of 8-9% sections and one or two 10% ramps about half way up (which you can see coming above you as you climb a couple of hairpins below), and the steepest section comes near the top—immediately after the 270 degree hairpin—at 11-12%.

For most riders, 39×27 is enough, but 36×27 preferable, and most riders who can climb at 10km/h indefinitely in the Alps will find that they can keep this speed up no problem for an hour on this steeper climb. That gets you up in just under an hour; a good time is somewhere in the 40min+ range; the record is claimed by Team Sky’s Richie Porte with 23.59 according to Daniel Friebe in Mountain Higher. He used 39×27. It’s worth looking up and looking around as you climb, to see the sights you missed on the way down through concentration and speed. Near the bottom is the overhanging cliff that looks like it will graze the roofs of the coaches; then comes the narrow gorge that sees two cliffs almost touch above your head as you cycle through.

You might want to stop on the corner immediately after that gorge for your last really good look at the sea. After that the views are of the cliffs above you, and of Puig Major (Mallorca’s highest peak at 1447m), which towers over you with the winter sun just above it. As you climb, you always have a good view of the road above you to come, except at the end: the 270 degree hairpin marks a change in the run of the road that hides the top, and the last kilometre comes as a surprise. Save a little juice for that last ramp above the 270 degree hairpin, and save some more for the ride home: at the very least (if you turn left to Pollensa or Selva) you’ve 150m of climbing still to do on the ridge; turning right to Soller means you’ve more like 300m still to go up. That’s perhaps the difficulty of the climb: the fact that the climb lies a good way from wherever you’re staying in Mallorca. You have to do at least one good climb to get over the Tramuntana ridge to reach the start of the descent of Sa Calobra, and when you hit the top of Sa Calobra, you still feel like you’re a good way from home. As one of our clients said this week: “I have never ridden such a wonderful road, but I’m so glad to be back at the villa now.”

Mallorca?
It’s a Spanish island in the Mediterranean which also goes by the name of Majorca. Look at the map below and it’s the larger of the three islands east of the mainland.

Race and ride
The island is host the Trofeo Mallorca races in February, 1.1 on the UCI calendar. They’re a series of one day races with an overall prize. This means riders can start just one or all four races and typically most mix and match to suit their form and objectives. You can see U-23 hope Dylan Groenewegen (Cycling Team De Rijke-Shanks) celebrate a win in one round earlier this year… but it was Sacha Modolo (Lampre-Merida) who pipped him on the line.

For amateurs there’s the Mallorca 312 which is a ride around the entire island that is, talk about nominal determination, 312km long. The 2014 edition has just finished leaving you plenty of time to plan for next year’s edition.

When To Go*
April and August are incomparable. Daniel Friebe writes in Mountain Higher:

In high season Sa Calobra the resort is a sow’s ear contrived out of a silk purse. The tiny bay becomes a bottleneck, corked and shut off from the cyan waters by a thick bung of sunseekers.

The Rough Guide to Majorca calls it “an over-visited disaster” but all this relates to the summer season when the island is one of Europe’s largest tourist draws. 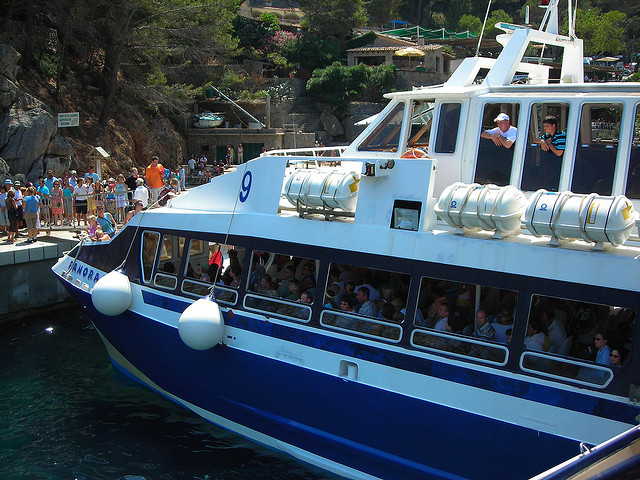 “Hell is other people” : They come by the boat load but also by bus, coach and car.

But all those villas, hotels and more need business outside of the summer and there are two secondary markets. First the “grey market” of senior citizens who visit all year round for the mild climate and low season prices and second the cyclists who come to enjoy the quiet roads, climbs and climate. It’s a great place to try in the late autumn but the number of riders picks up from January as Germans, Brits, Danes and others escape grim weather at home and rack up miles as well click-clack their cleats around coffee shops. The main tourist season has its peak in July and August with June and September being busier.

From mid-Feb the restaurants in Sa Calobra are open, so there will be the odd car and coach going down—these have a tricky drive, and will be going much slower than the average cyclist. By April the road is growing busier, and by May-June Sa Calobra is perhaps too busy to be any fun to ride, unless you get up very early in the morning. Whenever you are on the island, try to find a time when you’ll have it quiet. In February you can drop down for midday but for each month later aim to leave be there an hour earlier to have quiet and fast roads for the descent.

Access
A tourist hub, Mallorca’s Palma airport is well served by connections all over Europe and the baggage handlers probably throw more bike bags and boxes than anyone else. You can take a ferry there from Barcelona and Valencia on the Spanish mainland.

Palma is the capital but cyclists tend to head beyond to Port de Pollença and Alcudia with the Serra de Tramuntana within range. From here it’s not far to Sa Calobra.

* Note: “The Feel” and the second paragraph of “When to Go” was written by the people at Cycle Mallorca who have been a sponsor of The Inner Ring. I’ve ridden down and up but it was ten years ago so and decided to ask for some local help