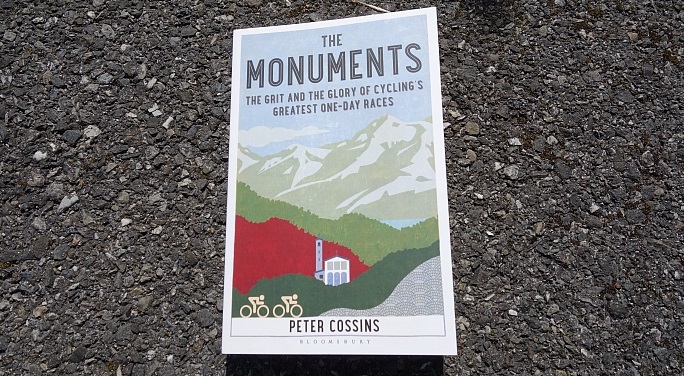 The Monuments – The Grit and The Glory of Cycling’s Greatest One-Day Races by Peter Cossins
With calendar changes promoting and relegating different events from year to year there are five one day races that sit above all of the others. These “Monuments” have stood the test of time and built a considerable capital of prestige, history and legend and this book is their tale.

The five Monuments are Milan-Sanremo, the Tour of Flanders, Paris-Roubaix, Liège-Bastogne-Liège and the Tour of Lombardy, nowadays re-branded as Il Lombardia. What makes these races so special? The book does plenty to explain with the countless tales that have laid the foundations for these events. But let’s detour via Robert Millar who, in his Rouleur column, explains the immediacy:

As a rider, the big one-day races have a different atmosphere to the Grand Tours. There’s more tension, more drama and – dare I say it – more excitement, and that’s something you feel when you turn up at the start. In stage racing, it’s all too often about recovery and calculating for the next day, but a Classic is a place where you can throw everything you’ve got into the pot – and if you can’t walk properly for the following three days, then so be it.

The Tour de France might be pro cycling’s shop window but the one day races are a concentrate of action, a race reduced to the essential even if it’s still spread over seven hours, a long duration for today’s TV concentration spans compared to the newspaper reporting of yesterday. The book’s strongest point is the density of information. It doesn’t report every edition of each of the five races but it does cover a lot of the highlights. Here’s a nugget from Paris-Roubaix in 1908:

“They announced a race for motor vehicles would take place on the same route on the same day… …Paced by two petrol-driven tandems, defending champion Garin emerged from the dust clouds and the melee of vehicles to retain the title in fine fasion… …His time would have been good enough to place third in the motorcycle race.”

Or what about the 1928 Tour of Lombardy?

“a day so wet the lakes flooded forcing the riders on to wooden boardwalks and into water that was up to their axles at some points. Binda punctured four times”

Two examples that show the story of a race with details like the weather and the number of punctures. As well as the history of the racers, the book also explains how races have changed. These races might be as old as the sport itself but they’ve evolved substantially over the years with route changes and more.

You get a sense of the race and its place in the landscape and local economy but this side isn’t so prominent, it’s more the tale of the great rides over the years through which we learn of the race itself. There is of course the account of how the race begun but more is dedicated to how the best editions were won than analysis of the race as a concept that evolves over time. It rigorously picks many of the best anecdotes as opposed to resorting to the recent past or overdosing on English-speaking riders to make the book more accessible. For example there’s only one mention of George Hincapie who was tipped annually by the anglophone media for the spring classics but the coverage always exceeded the results. Here his name is only included in relation to Tom Boonen. 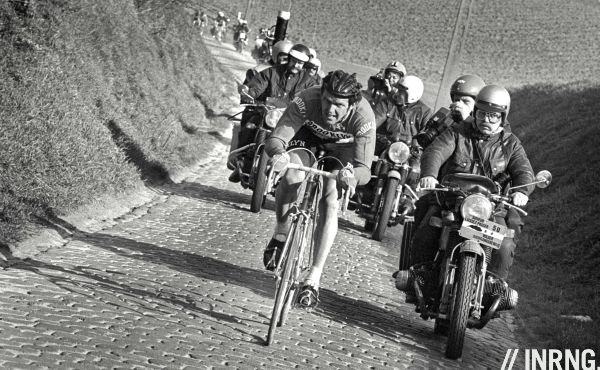 However there are some problems. First there’s accuracy, there’s a howler on the back cover which states “only Rik van Looy and Eddy Merckx have won all five races” but so did Roger De Vlaeminck. It’s all the more odd since the directory at the back lists De Vlaeminck as a winner of all five. Maybe it was the fault of an office junior tasked with producing the cover rather than the author but it meant starting the book nervously, like riding a lightweight rim down a cobbled path. Could I pick up speed over the pages? No, I got stopped on page 3 and the myth of Bernard Hinault’s 1980 Liège-Bastogne-Liège win where he blasted through a blizzard and suffered a “permanent loss of feeling in some fingers”. This isn’t true and oddly 50 pages later we learn “it took three weeks for the feeling to return fully in his hands”. There are others, for example a reference to “Jacques Poulidor” who even gets a second mention in the index. The perils of print, I can press “edit” on any piece here to fix a blunder. But don’t let this put you off, the rest of the book is very well-researched with Cossins returning to plenty of primary and secondary source material to tell the stories. Archives have been visited, documents sifted and the result is a book backed with facts, if there’s are mistakes the error rate is very low when seen in percentage terms…

…Which brings us to the second problem: the sheer density of information. Now this is a bit like a job interview where the candidate is asked to list their weak points and responds with a weakness that’s really hinting at a strength, for example “I sometimes work too hard” or “sometimes my attention to detail frustrates colleagues “. You can’t knock the book’s thoroughness but it can be the reading equivalent of riding over cobbles, you’re pounded by so much information that you have to take it slow. At random I opened the book on page 312 and decided to count the number of facts stated on the page. I got to eight… just on the first third of the page. This is wonderful but it’s not a page turner.

It’s a book to read in chunks rather than one go as it’s the history of each race rather than a sweeping arc across the sport. It’s also so dense with anecdotes that you’re better dipping in an out, it suits a commuter journey by train or few pages every night rather than a long haul flight or some other captive scenario like a hospital bed.

The book ends with an epilogue that does assess the Monuments place in the sport and should be required reading for UCI officials and others. These are great races that do have special status but this needs to be protected. For example in promoting the Gent-Wevelgem to the World Tour and running it on the Sunday between Milan-Sanremo and the Tour of Flanders certainly elevates the status of this race but it’s incomparable to the Monuments. Only newcomers to the sport might not realise this. Perhaps they should buy this book to learn what’s important and why it is so? But we need a sport that doesn’t require a 400 page manual to introduce its greatest races too.

Summary
A cobblestone of a book, the paperback runs to 400 pages. Aside from slips like the De Vlaeminck omission it’s packed with information and includes an index, essential for looking up all the names, years, incidents and more. But don’t read in one go, this isn’t a storytelling yarn more a dense collection of the anecdotes and exploits from the best races. It is so full of facts and accounts that it will stand the test of time as a reference material.

Note: this copy was sent free for review. It is published by Bloomsbury and available in print and electronically.