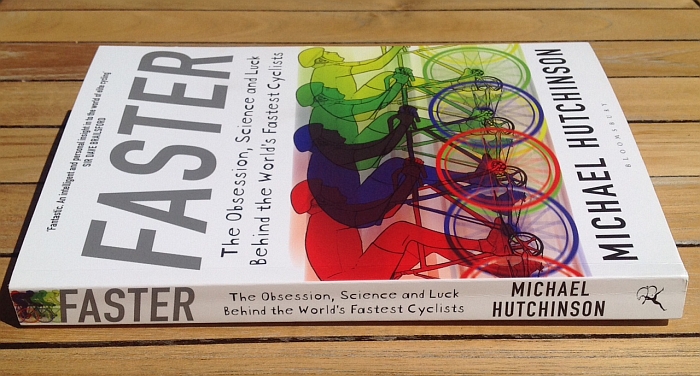 Here’s a coaching manual that’s not a coaching manual. In this book Michael Hutchinson goes on journey to explore what makes the best riders so good, from genetics to training, nutrition and bike tech. These are serious subjects but it’s all dealt with in a very readable way.

This is the story of Michael Hutchinson’s quest to ride faster. A local British pro with a focus on the domestic time trial scene he seems blessed with giant lungs but on investigation his physiology turns out to be great at transporting oxygen but a touch less effective at using it compared to peers like, say, Bradley Wiggins or David Millar. Consequently he’s spent years trying to improve and this is partly the tale of his efforts to go faster, documenting his drive and even obsession along the way. This isn’t merely hard training sessions, it’s having friends pick their wedding date to suit Hutchinson’s race calendar. But Hutchinson has access to many in British Cycling and the sister Team Sky set-up so it’s a wider look at what’s behind elite athletes.

Relaxed Tone
It’s a easy read from the start and if it’s a book, it’s delivered in a way that makes you feel like you’re getting a relaxed after-dinner speech or maybe a lecture from a comedian rather than an academic journal. There’s plenty of technical content and science but there’s not a single graph, formula or data table. It doesn’t read like a manual, largely because Hutchinson resorts to self-deprecation.

You vs Them
The distinction between elite and ordinary is a recurring theme in the book. Take VO2 Max and power output. If you tested 10,000 cyclists there’d be a close correlation between higher VO2 max scores and threshold power. But it’s not the same with the elite, if you took the top-10 from last Saturday’s time trial stage of the Tour of the Basque Country there might be no correlation. Why? Well they’re all at such a high level that the variable factor between them can be elsewhere, maybe it’s efficiency or something else. The distinction matters. For the typical reader there’s the temptation to ape something seen on television or in the pro peloton but the physiological response is very different. Put simply adopting Chris Froome’s training schedule won’t make you into a Tour winner, in fact it’ll probably leave you shattered, a worse state than before.

Still for those eager to learn more on training techniques for Sky’s riders there’s plenty of insight into the British team, whether it’s small details like Team Sky paying a company to make pineapple juice for them in bulk quantities or the programme for a day on Tenerife for a Sky stage racer with the timings, distances, cadence and more set out for you to understand. There’s an amusing anecdote on the clothing used by the British teams for the 2008 Olympics where the clothing is outlawed because it’s so slippery only for the Brits to return in 2012 with faster kit having spent even more money. Hutchinson rightly points out the way rules are arbitraged like tax law, each new rule change creates loopholes and those with the money can exploit it. Meanwhile “Hutch” is creating his own tripwires with duct tape and pinking shears. And after learning of the wattages needed for the 4,000m team pursuit, I’ll never watch a track race in the same way again. At the same time the book is Brit-centric, there’s talk of time trials, track and Sky but little on the pavé nor the Pyrenees. Understandable but it means you might be looking up some of the names and cultural references dropped into the book.

“Eating your own legs”
As much as it gets scientific it’s often explained with humour, for example when looking at the sources of food protein as a source of energy is reviewed and how muscle mass can be broken down for energy, “this is not good news – it’s the equivalent of eating your own legs”. Early on there does seem to be an assumption the reader knows what a power curve is but plenty else is explained to the lay reader. Indeed it’s a book that, say, runners or swimmers could enjoy too.

Sky insight
There’s plenty about Sky, the British track programme and more. There are more and more books on this topic – Project Rainbow etc – and Faster only dips in and out of the topic but when it does, it’s often going into granular detail such as the number of calories Bradley Wiggins would eat during the Tour de France and what was on the menu: it’s not so much the process, more the food processor.

Spot the contradiction. A VO2 Max test is in a lab, there’s no race. But training and testing are all part of the process and many if not most racers even at the most lowly level spend more time training and preparing for a race than actually racing. So training has to have its highs and it’s what a professional athlete does for 99% of the year because competition is the exception.

Ultimately Hutchinson enjoys the training because of the process of flow. For him this involves a quest for (self-) improvement and leaving no stone unturned from the physiological to the technical. This might not be your kind of cycling and if you’re in the Paul Fournel camp then you won’t buy this book as a poetic paean to the joys of cycling. Instead Faster is a personal exploration of bike science from tech to nutrition, all told by an obsessive. But what makes it so readable is that it’s full of easy prose, has many tips and never reads like a manual or a journal.

Note: this copy was sent free for review. It is published by Bloomsbury and available in print and electronically.