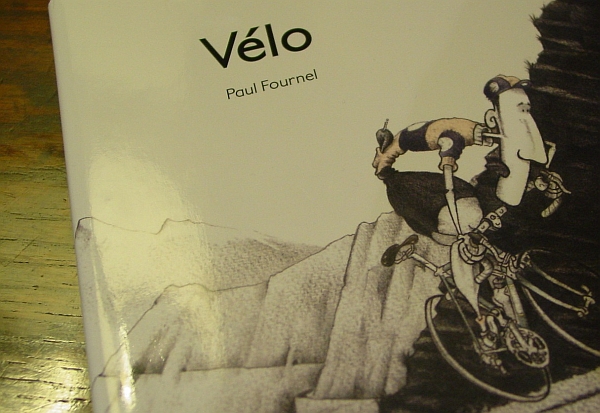 Remember those action films where someone would get poisoned and only a special serum could cure them? Our ailing hero would be close to death but the antidote always arrived just in time.

Following pro cycling can leave many feeling sick thanks to unredeemable controversy and scandal; although this can be part of the intrigue too. Still this should be a beautiful sport that uses a bicycle to turns farm tracks into paths to glory and exploits mountain ranges as arenas. In truth there are still lots of good stories but they’re being drowned out by the poison of the past.

There’s no magic remedy to these problems but you can find escapism. The easiest escape route is a ride, the simple pleasure of pedalling can often remind you that cycling isn’t about someone else’s race. Indeed this is what Fournel’s book is about and over the pages we get a series of short essays and vignettes that cover cycling and many of the related experiences, from click-clacking in cleated shoes to the pleasure of aching legs.

Fournel writes very well, using a compact style to describe his experiences on the bike. He’s a professional author, he leads a movement of writers in France called Oulipo. As such he’s more intellectual than physical and you discover this as he often enjoys writing about the slower parts of a bike ride as opposed to a race. Each subject, from tan lines to the texture of roads, is a short meditation, an observation on something the cyclist might experience. Here’s a thought on Mont Ventoux:

The Ventoux has no it-self. It’s the greatest revelation of yourself. It simply returns your fatigue and fear. It has total knowledge of the shape you are in, your capacity for cycling happiness, and happiness in general. It’s yourself you’re climbing. If you don’t want to know, stay at the bottom.

As you can see, Ventoux is not a mountain with some tarmac, it is a personal experience. And here’s a thought on a map:

For me, road maps are dream machines. I like to read them as one reads adventure stories.

Again, a simple printed map is much more for the romantic Fournel who plots his adventures across France. These are personal takes but much of it rings true and just as Fournel looks at a map and wants to project himself, reading this book does transport you to a ride in France with its roads, aromas and all the other observations Fournel makes. Fournel isn’t trying to be definitive, he is not stating “this is cycling” but instead offers is take and personal experience. It’s all from someone bitten by what Louis Nucera called the “virus of cycling”, the infectious passion and addiction that makes riding vital.

This book is his “Need For the Bike” book added to extra writings from Rouleur magazine, longer essays. The writing from “Need For The Bike” is a translation and a few phrases from the French version just can’t be translated effectively because Fournel might choose a phrase for its double entendre. But overall the translation is excellent and I preferred this version to the original French. One reason is that this book is larger and includes cartoon-like illustrations to accompany the pieces. The French version is – like most French publications – much more austere featuring the standard house font of the publisher and little else. This has the effect of spacing out the stories rather than cramming in the text and so you can open the book anywhere and read with ease.

Fournel’s writes so well yet the book isn’t perfect, it’s almost too prim at times: cycling trimmed into Bonsai text and his words are incisive. If you come to this site for pure pro cycling then Fournel’s accounts of riding in his native countryside of the Haute Loire might not grab you; he’s strictly amateur and if he draws references from racing, he’s not doing the Tour de France. And perhaps he over-analyses but then again if he did not spot the detail there’d be zero to write about.

Overall this is a very enjoyable book that’s actually better in this format than the original French paperback, a book which I’d been planning to review because “Need for the Bike” is worth sharing. Fournel’s simple escapism reminds me of Tim Krabbé’s The Rider because of the detail and the tight prose. Whilst Krabbé’s mind wanders during a race, Fournel has wandered on many roads during his life and his recollections are enjoyable take on what it is to ride a bike, from the freedom of the countryside to the inconvenience of colliding with a car door.

It is published by Rouleur and available for sale via their website: http://www.rouleur.cc/Velo

Disclaimer: this copy was sent free for review and it’s not going back