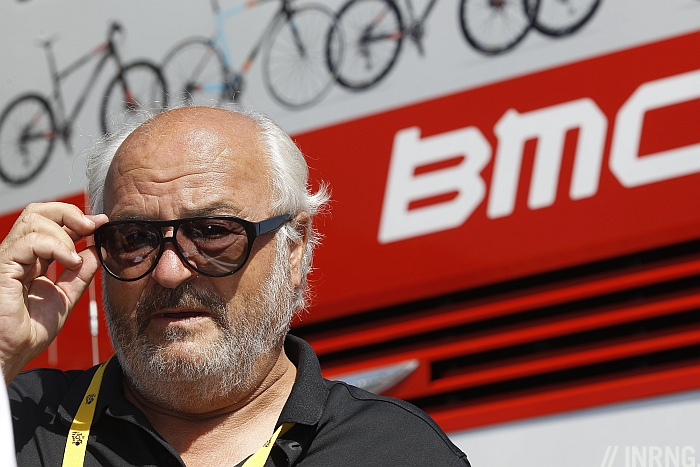 There are enough billionaires and multi-millionaires in the sport to make this in to a two part series. After yesterday’s first instalment, here is Part II which includes the only woman on the list but arguably she’s the most powerful figure in the sport.

Andy Rihs – BMC Racing
After Chet Pipkin yesterday, another tale of garage start-up. Andy Rihs is the Swiss owner of BMC and the big benefactor behind the BMC Racing team. Perhaps you’ve played in a fantasy cycling league like Velogames and wanted more credits to buy extra players? Rihs is playing for real and has deep pockets that allow him to fund the team and hire the best riders at their peak. That’s why he’s got the likes of Cadel Evans, Philippe Gilbert, Thor Hushovd and more on his team.

Yet Rihs isn’t wealthy thanks to BMC bikes and its sister brands Bergamont and Stromer. Instead his father Ernst started a hearing aid business that went from his garage to a global consumer healthcare giant called Sonova (formerly known as Phonak) and at the time of writing it is worth about US$7.5 billion (€5.5bn) and employs close to 9,000 people. According to the latest Sonova Annual report Rihs has sold down his interest in the firm, going from 8.7% to 6.3% of the business and his remaining stake is valued around $570 million (€415m) and enough to generate over $7 million (€5m) a year in dividend income alone.

He’s also got interests in watch-making, normal since the BMC factory in Grenchen is near the Breitling HQ and an area famous for its luxury timepieces. He’s also opened the new velodrome in Grenchen, a project he part-funded by donation and it’s not just an arena as the Swiss Cycling federation has moved its offices to the building. 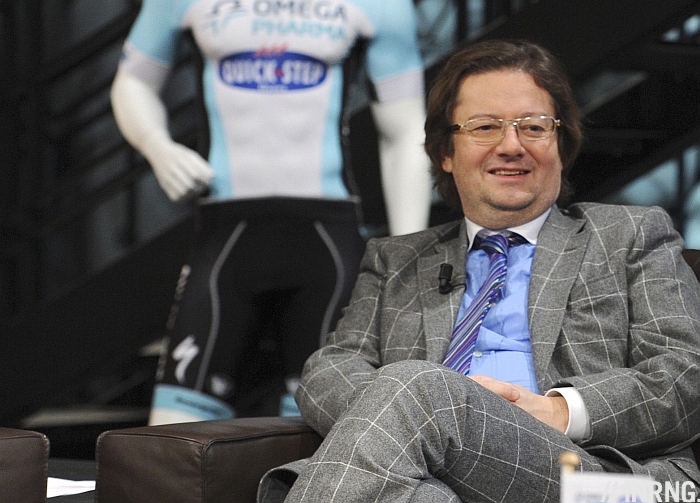 A pharmacist by training, Marc Coucke co-founded Omega Pharma in 1987. A cycling fanatic, he has sponsored several cycling teams and today he has the likes of Mark Cavendish, Tom Boonen and Tony Martin riding, literally, in his colours. Coucke floated Omega Pharma on the stock exchange but bought it back in 2012, presumably a canny move given stockmarkets around the world have soared since. His business is growing thanks to increased sales abroad and cleverly Coucke links riders to his key markets, for example Cavendish gets his brand coverage in the UK and Sylvain Chavanel did the job in France.

Coucke’s sporting interests broadened in 2013 as he became the main shareholder and chairman of soccer club KV Oostende, with the Kustboys newly-promoted to the top division of Belgium’s league system. He is known for his loud suits and bright shirts but doesn’t always live tycoon-style. Famously tough on prices and wages he refused to meet the wage demands of Philippe Gilbert prompting the departure to BMC and in 2009 Couke gave up his Bentley for a Skoda. 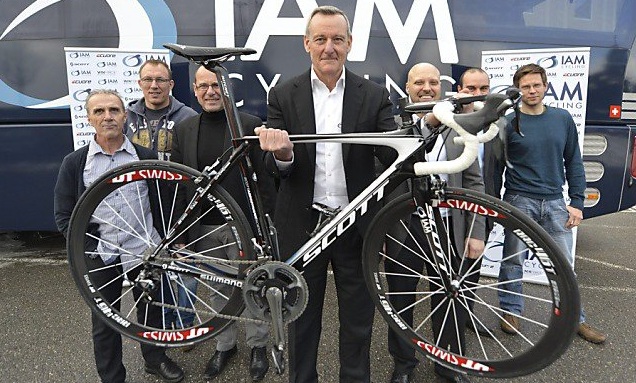 Michel Thétaz is the Swiss man behind IAM Cycling. Aged 62, his wealth is reported to be around 200-300 million Swiss Francs. An estimate that Thétaz would surely frown on, first for its imprecision as he’s made a career in financial services where exactitude matters and second because it’s indiscreet to boast about money in Geneva, the city that thrives on offering discreet financial services to the wealthy.

IAM is a fund manager and Thétaz seems to be a small-scale Swiss version of Warren Buffett, the wise investor who avoids financial fashion. A proponent of “slow finance,” Thétaz has criticised hedge funds as speculation tools, bemoans the easy money made by the explosion of financial services in recent years and takes a contrarian approach to investment, buying when others sell and avoiding the herd. Similarly much of the finance industry is built around predicting the future despite little evidence of predictive ability but Thétaz avoids this, saying “I’m no Madame Soleil”, a reference to a once popular French astrologer.

He’s a cyclist who rides 5,000km a year but investing in a team for publicity with a view to selling his funds to the general public in Switzerland and beyond. He’s now got arguably the strongest Pro Continental cycling team and can reasonably expect a wild card invitation to the Tour de France in July. 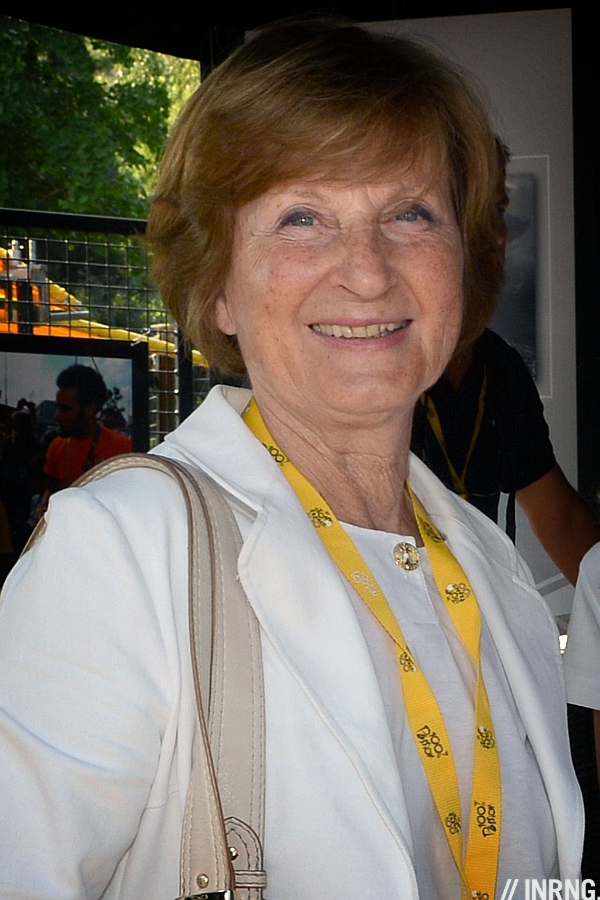 Meet the woman who makes this the list of wealthy people rather than just wealthy men. ASO own the Tour de France and the A stands for Amaury. Amaury Sport Organisation belongs to the Groupe Amaury, a family business and Marie Odile took over the reins when her husband died in 2006. She’s been labelled the organisatrice du Tour de France but there’s plenty more to it as Amaury owns daily newspapers L’Equipe and Le Parisien, a combined circulation of over 800,000 as well as a photo agency and other sports events. She’s better known as a publisher but newspapers are expensive in France and nobody is making much money. The Amaurys consolidated their media ownership after buying back the 25% stake owned by rival media empire Lagardère. More dealmaking in 2012 saw ASO buy the Vuelta a España too.

The Amaury family is reported to be the 138th richest in France. ASO is incontournable as they say in French, unavoidable when discussing cycling. Daily administration of ASO and its stable of cycling races is left to others, you rarely see her at the Tour de France, although she was there last summer for the 100th edition. It’s said she will get involved in big decisions, including editorial line at L’Equipe. Aged 73 apparently she enjoys listening to Led Zeppelin, Guns N’Roses, Metallica and AC/DC amongst others.

Speculation of a sale of the Tour de France appears now and again in the French business press. Anything is possible if the price is right but this would be more than business deal, it could transform pro cycling and July is a socio-cultural event and geography lesson for the French so the Tour is not some commodity to be bought and sold with ease.

A mention of Marie-Odile has to include her son Jean Etienne Amaury, pictured above. He is the President of ASO. You might think Christian Prudhomme is the Tour’s patron but he’s merely an employee of J-E Amaury who has executive power and stands to inherit the business one day. Amaury trained as a software engineer and spent several years working discreetly on Bloomberg’s IT systems in London before leaving to do an MBA at Stanford University and then assume a role in the family business.

For all the billionaires in and around the sport, this places the Amaury’s as the richest people in pro cycling, not on count of money or “net worth” but because they own the sport’s prime asset. All the others on the list spend millions a year so that their team can participate in the Amaury’s event.

Gone but not forgotten
Flavio Becca has dropped off the list. The Luxembourg real estate mogul offers a cautionary tale, entering the sport with the aim of running a top team and renting out jersey space for a premium. But without a naming-rights sponsorship deal he was left with the Leopard tag on the jersey and a hefty wage bill to meet.

But what if Becca’s problem was timing? Longer term if the sport is becomes more commercial with franchise then team ownership could become an asset but for now owning a team is like a yacht, it’s fun and everyone would like one too but it actually costs a fortune.

Others…
This isn’t an exhaustive list but I’ve hopefully included the most wealthy. There are others in the sport but either these people are simply not wealthy enough or they’re not directly involved in pro cycling. Think about…

Commentary
This piece isn’t about gawking at wealth. Instead I hope it explains the backgrounds of some of those sponsoring the sport, an introductory “follow the money”. Despite shared experiences of garage start-ups or Russian wealth, each story is different. Some are passionate about cycling – Rihs, Tinkov, Makarov – and others use the sport for corporate publicity – Pipkin, Seier – and their passion lies in work, politics or charity. Marc Couke seems to combine passion and publicity.

It’s great to see new money in the sport rather than go elsewhere although most of the money isn’t invested, it simply flows into rider wages. Without these people several teams would not exist but the sport would still go ahead. At the same time these sugardaddies continue to signal an absence of corporate sponsors. Despite the giant publicity generated by the Amaury’s Tour de France, teams struggle to find buyers for the naming rights and the “real estate” on the team jersey and as long as this continues the future of many teams is linked to the fortunes of a few wealthy men.

This is the second half of look at the wealthiest people in pro cycling, see The Wealthiest People in Cycling, Part I for more.

Previous post: The Wealthiest People in Pro Cycling, Part I