Flanders Classics, the company behind the Flemish races

ASO and RCS are century old media companies with their own daily sports paper, L’Equipe and the Gazzetta Dello Sport respectively as well as several other activities across the sports and media sectors. By contrast Flanders Classics is dedicated solely to cycle sport, although it has connections to the media in other ways which will be explained.

Flanders Classics runs the Tour of Flanders and five other races: the Omloop Het Nieuwsblad, Dwars Door Vlaanderen, Gent-Wevelgem, the Scheldeprijs and the Brabantse Pijl. It was in 2010 that the company acquired these races but first let’s go further back in time.

Five years ago there was talk of a breakaway cycling project with financial backers trying to create a fixed series of races, some whispered it was going to be run on the basis of Formula 1, with a corporate entity gaining tight control of the sport. Here’s the Wall Street Journal in 2009:

In July 2007, Messrs. Armstrong and Stapleton [inrng: Lance Armstrong and business partner Bill Stapleton] entertained another prospective plan to reorganize cycling from Wouter Vandenhaute, a Belgian television executive and former sportscaster, who has a plan he calls the “World Tour.” At the Hôtel de Crillon in Paris, Mr. Vandenhaute proposed a series of races with the Tour de France as the de facto Super Bowl of the season. Mr. Vandenhaute was talking with Luxembourg-based private-equity firm CVC Capital Partners.

As we see, the idea of shaking up the format and ownership of the sport is not new. Note the “World Tour” label created by Wouter Vandenhaute. 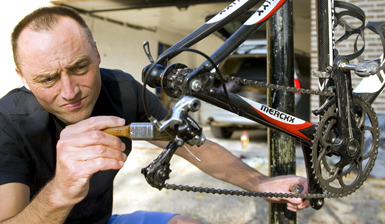 Vandenhaute wants to clean up

Fast forward
Today Wouter Vandenhaute is the man behind Flanders Classics. He started his career as a sports journalist in the 1980s before moving to more general writing and by the 1990s he switched to television production, founding a production company called Woestijnvis (“Desert Fish”) in 1997 that specialised in Flemish reality TV shows. He pooled his investment in Woestijnvis with others to take over VT4 and VijfTV, two local TV channels.

Vandenhaute also owns a restaurant outside Brussels called Couvert Couvert which recently won its first Michelin star. As well as a successful entrepreneur, Vandenhaute is also a cyclist. Close to Eddy Merckx, he’s raced and toured and is known to spend his summers riding in the Alps. He even goes on the odd ride with the likes of Philippe Gilbert.

The passion for cycling and the entrepreneurial spirit meet in Flanders Classics. Take the decision to change the Tour of Flanders route, bringing it to Oudenaarde and dumping the Kapelmuur climb in Geraardsbergen from the route. If you can smell money here, you are right:

21st century sport
You can see the takeover as a way to grab a monopoly over the prime assets of Belgian cycling but there’s an obvious need for a shake-up, to drag the sport into the 21st century. Take the internet and social media. Now a blogger might say this but many races struggle with small things like a functional website – the Tour de France website is dated –  yet Flanders Classics offers an app for your smartphone. Little details like this expand the reach of an event for almost no cost and should be elementary for a large public event but most of the sport hasn’t realised this yet.

No overall control
Vandenhaute might have taken control of some of the biggest races in Belgium cycling but he doesn’t control everything. For starters in the French speaking half of Belgium both Liège–Bastogne–Liège and the Flèche Wallonne race are owned by ASO and the French company has added the “World Ports Classic” later this year. The organisers of Flemish races like the E3 Harelbeke and the Three Days of De Panne are apparently wary of Vandenhaute and the E3 organiser Bart Ottevaere alleges Belgian TV chopped 30 minutes of airtime from his race under pressure to please Vandenhaute. Vélo Magazine’s Philippe Le Gars has written that the UCI awarded the E3 Harelbeke World Tour status as a way of counter-balancing Vandenhaute and his ambitions.

The ambitions are to promote the business side of the sport. Dropping the Kapelmuur (part of a selective trilogy with the Tenbosse and Bosberg) from the Tour of Flanders symbolises this. Out goes the iconic climb in this most historic race, largely so his company can sell VIP packages. But the decisions are not taken lightly, in an interview with La Libre, he explains a range of marketing experts and ex-pros were asked about the route changes.

The future?
A sports journalist in the past, a cyclist, once voted as “Belgium’s top manager”, a reality TV producer, restaurateur, entrepreneur, mini media magnate, Wouter Vandenhaute hasn’t bought six of Flemish cycling’s top races just to sit back. Cycling is “2% of my business” he told Vélo Magazine. Adept at making the other 98% very successful, at least on the whole, it’ll be interesting to see where he takes Flemish racing next and if he is involved in broader plans to reshape the sport in the months and years to come.

Previous post: Tour of Flanders: The Moment The Race Was Won