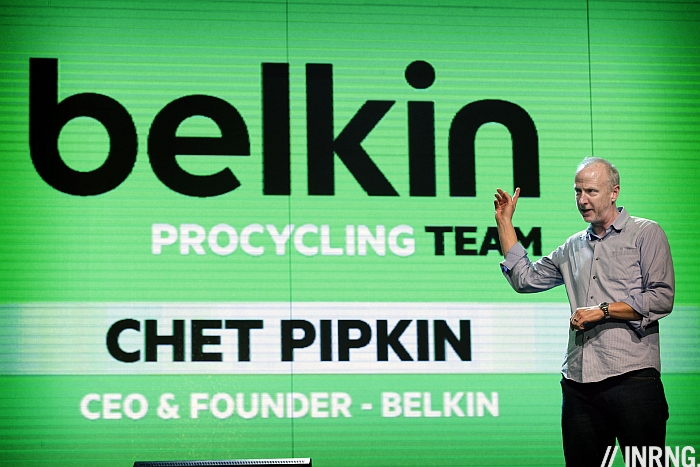 Time for the annual update on the wealthiest people in pro cycling. If you thought this meant Alberto Contador, Mark Cavendish or Philippe Gilbert, think again because this is about the people rich enough to hire these star riders.

2013 looks to have been a good year for the millionaires and billionaires around the world and many of those in pro cycling had an especially lucrative year thanks to booming stockmarkets, billion-dollar business deals and rising income.

Chet Pipkin
Even Forbes doesn’t know how wealthy Chet Pipkin is. He’s the man behind Belkin and a new sponsor for the sport in 2013. Belkin is privately-owned, there’s no stockmarket listing to provide an instant valuation of his holding. But it’s said he could be a billionaire or thereabouts.

Every penny counts though as Pipkin’s family moved to California in the 1940s. His name might sound like a character from a Dickens novel but in fact the Pipkins have another literary association. It’s said his great aunt Myra Pipkin gave inspiration for the Ma Joad character in John Steinbeck’s “Grapes of Wrath”, the desperate tale of a family moving west in search of work and hope. You can see the Pipkin’s pictured at a migrant labour camp in 1940 and Steinbeck apparently visited this camp for interviews:

Fast forward 30 years and Chet Pipkin started work young as a boy with a soldering iron as the consumer electronics boom started and started making cables to link up printers and computers in an era long before universal connectors like the USB cable. Belkin came about after Steven Bellow and Pipkin founded the company in the 1970s, the first and last three letters of their names Bel- and -kin making Belkin. Like many a Californian start-up, Pipkin dropped out of college and started out in his parents garage and the company’s ridden the rise of Apple’s products with a range of accessories.

His interest in pro cycling is commercial but this isn’t a remote decision taken by Belkin’s marketing department, Pipkin joined his new team for last summer’s grand départ of the Tour de France in Corsica and is said to have enjoyed the experience.

Igor Makarov – Katusha
Loyal readers will know about Russian tycoon Igor Makarov, a contender for the richest man in the sport, only nobody knows how much he is worth. He’s arguably the busiest man in cycling as he owns Katusha, sits on the UCI Management Committee and presides over the Russian cycling federation. Oh and he’s been running a giant energy company too. 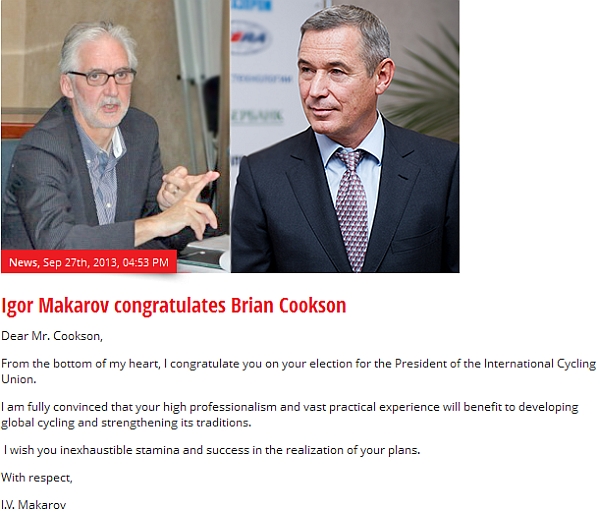 Who is the bigger and better dressed figure?

If you read the Tinker, Tailor, Cyclist, Spy piece you’ll know he’s been part of Russian Premier Vladimir Putin’s komanda of oligarch business owners. This time last year we could speculate that Makarov was a billionaire but now this is fact. He’s had a great last 12 months, selling his 49% stake in Itera, the gas trading company he founded in the 1990s. Russian energy giant Rosneft paid $2.9 billion (€2.1bn) for the stake. What he does with the cash remains to be seen given he already owns villas and large yachts. But for now he’s a fixture in the UCI and a supporter of Brian Cookson and perhaps we’ll see a new pro race in Russia in the next few years? 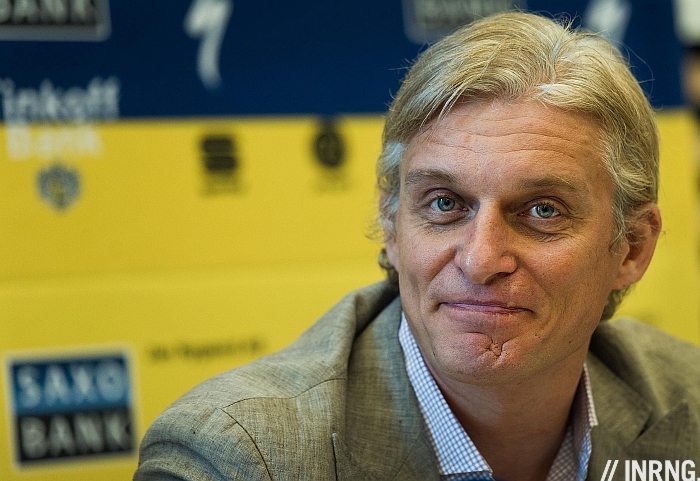 Another Russian but a very different story. Like Igor Makarov he’s a former cyclist turned self-made Russian billionaire but the similarities with Makarov soon stop. Makarov is discreet, Tinkov tweets. An outsider who often pitches himself against the Moscow oligarchs, Tinkov’s a popular capitalist in the mould of Britain’s Richard Branson with a similar eye for self-publicity. As if to contrast himself with Makarov, here’s a line from his biography:

“I want entrepreneurship in this country to advance so that fewer people work at Gazprom [the oil and gas monopoly] with fat faces and grey suits, and more people become young, innovative entrepreneurs”

Tinkov was in Uzbekistan for a race and spotted some blue denim jeans, then the height of fashion and above all very rare. He spent all his cash to buy four pairs of jeans and returned to St Petersburg where he sold them for four times their price and continued onwards to today via dumplings, breweries and now online banking and credit cards with Tinkoff Bank which recently floated on the London Stock Exchange. Some reports say he’s a billionaire but Tinkov’s finances go from London to Moscow via Cyrpus and it’s hard to track. Regardless he’s certainly flush with the cash  and you’ll know he’s recently bought the Saxo Bank team, now Tinkoff-Saxo.

Outside of cycling work goes on, his new venture is Tinkov digital, an “internet incubator” to develop new online and mobile advertising technology-based businesses, a joint venture with US bank Goldman Sachs. He still finds time to ride and probably racks up more hours in the saddle than all the others on the list combined, enjoying the roads around his Tuscan villa when he’s not live-tweeting his emotions during the Tour de France.

Having mentioned Tinkov, here are his team’s co-sponsors. Kim Fournais and Lars Seier Christensen are the co-founders of Saxo Bank who hold 60% of the business between them. The bank label can confuse. Like Tinkov, they’ve grasped that a bank is no longer a big building with a safe vault but a secure technology platform instead. But unlike Tinkov, they sell sophisticated financial products, acting as a brokerage and technology platform. The pair met in London and 20 years later have a financial services giant that puts each of them amongst the very wealthiest in Denmark. Saxo started as a brokerage but the pair were quick to harness the infant internet for the business.

Christensen and Fournais are outspoken and fixtures in Danish politics: employees are gifted a copy of Ayn Rand’s “Atlas Shrugged”. The Saxo name’s gone from Copenhagen to London and now beyond during the sponsorship. They’ve proved a resilient sponsor over the years, supporting Bjarne Riis through thick and thin but are now looking to leave the sport and this could be the last time they appear on this list.

James Murdoch – Team Sky
The younger son of Australian-American media mogul Rupert Murdoch, James is a British citizen and keen cyclist, a factor behind the creation of Team Sky although Sky seem keen to play this down. It’s said his interest was a big factor in launching the team but now it’s up and running it’s pure commercial logic. All good news for the sport because James Murdoch moved to New York after standing down as Chairman of BSkyB following a scandal over media ethics and I wondered if this switch might cut the corporate enthusiasm for the team.

The most recent numbers show Sky’s total annual marketing budget was just over £1,064 million (yes, a billion British pounds) and Team Sky represents just 1% of this spend. James Murdoch is not in the same league as Igor Makarov in terms of cash wealth but can call on the influential media empire for support. For now but his ultimate wealth depends on the performance of News Corp and the will of his father. He could inherit a business worth billions at some point in the future. More certain is his enjoyment of the sport, he rides regularly and gets to enjoy a front row seat in the Team Sky car during the Tour de France.

Co-owner of the team with Marc Coucke, Bakala is a billionaire financier from the Czech Republic and sits on the Forbes list of the most wealthy people in the world. He crossed the Iron Curtain for business school education in the US and then became an investment banker and soon returned to open the offices of Credit Suisse, a Swiss bank, in Prague, then at the frontier of capitalism. He later started his own bank and sold this to a Belgian bank to make his fortune.

He then parleyed this capital in to a range of businesses interests from mining to restaurants, including one of Europe’s largest coal and iron operations in Ukraine and Poland. Business New Europe described the deal in their September 2008 edition:

Zdenek Bakala… is widely regarded as having pulled off one of the deals of the decade by doing a leveraged buyout of the coal miner for a reputed €400m in November of 2004, then set about stripping out assets worth around €2bn, and then flogging off the remains to an eager market that valued the firm at €4.5bn.

He bought the Quickstep cycling team with Bessel Kok, a chess-playing telecoms executive he worked closely with during an aborted bid to privatise the Czech national telecoms business. A businessman who likes to restructure businesses he’s been a driving force behind the plans to reform the pro cycling calendar. A figure in the Czech establishment, it’s no accident Czech ace Zdeněk Štybar rides for OPQS. 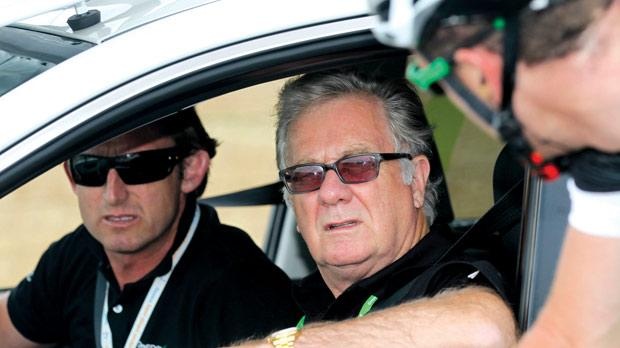 The Australian is a long time supporter of cycling “Down Under” and has recently become President of Cycling Australia. He is the man behind the Orica-Greenedge cycling team and still part-funding everything until a co-sponsor is found, that’s two full seasons and possibly three now.

Past reports have put Gerry Ryan’s net worth at around $180 million. His son Andrew is also closely involved in the Greenedge cycling project and Gerry said:

“my son Andrew whose role is sponsorship, has the greatest incentive to go out there and make it happen because it’s his inheritance that I’m spending”.

He’s not a cyclist but a benefactor for Australian sport and at times an investor in sport too. He’s also funded non-sports activities. He made his first fortune with Jayco, a caravan maker, and is the prime investor behind Global Creatures, the firm behind the highly successful “Walking with Dinosaurs” franchise. This is so successful it’s said Ryan is the biggest earner in Australia’s entertainment sector, ahead of rockers AC/DC and actors like Mel Gibson. The wealthy enjoy their wine but Ryan likes more than a glass: he owns the Michelton winery and you’ll see its logo on the Orica-Greenedge team kit too.

This is the first half of look at the wealthiest people in pro cycling, see The Wealthiest People in Cycling, Part II for the next instalment.