The final week of the Giro begins as it will finish: climbing in the Alps. But the stage is dominated by a long valley section before a tricky final spike that should be just enough to thwart the sprinters before a finish in Ivrea.

The Route: Even if much of the route is downhill, it’s still 238km which is arguably way too long for the third week of a grand tour. If riders are tired, they’d do well to get an extra coffee before the start because there’s an Alpine descent to start the day. The Télégraphe is not technical but if some try to get away then others will chase and before you know it the race is screaming down the hill. The race climbs back up the Maurienne valley through Modane and then the Mont Cenis, 10km at 7%.

A plunging descent but note the profile above exaggerates as the Mont Cenis ends before before the town of Susa. Then comes the long Val di Susa, reversing down the road that the race borrowed in emergency instead of climbing to Sestriere on Saturday. The race speeds to Ivrea after 198km before heading out for a 40km loop in the Alpine foothills that sit above the town. The climb to Andrate is tough. 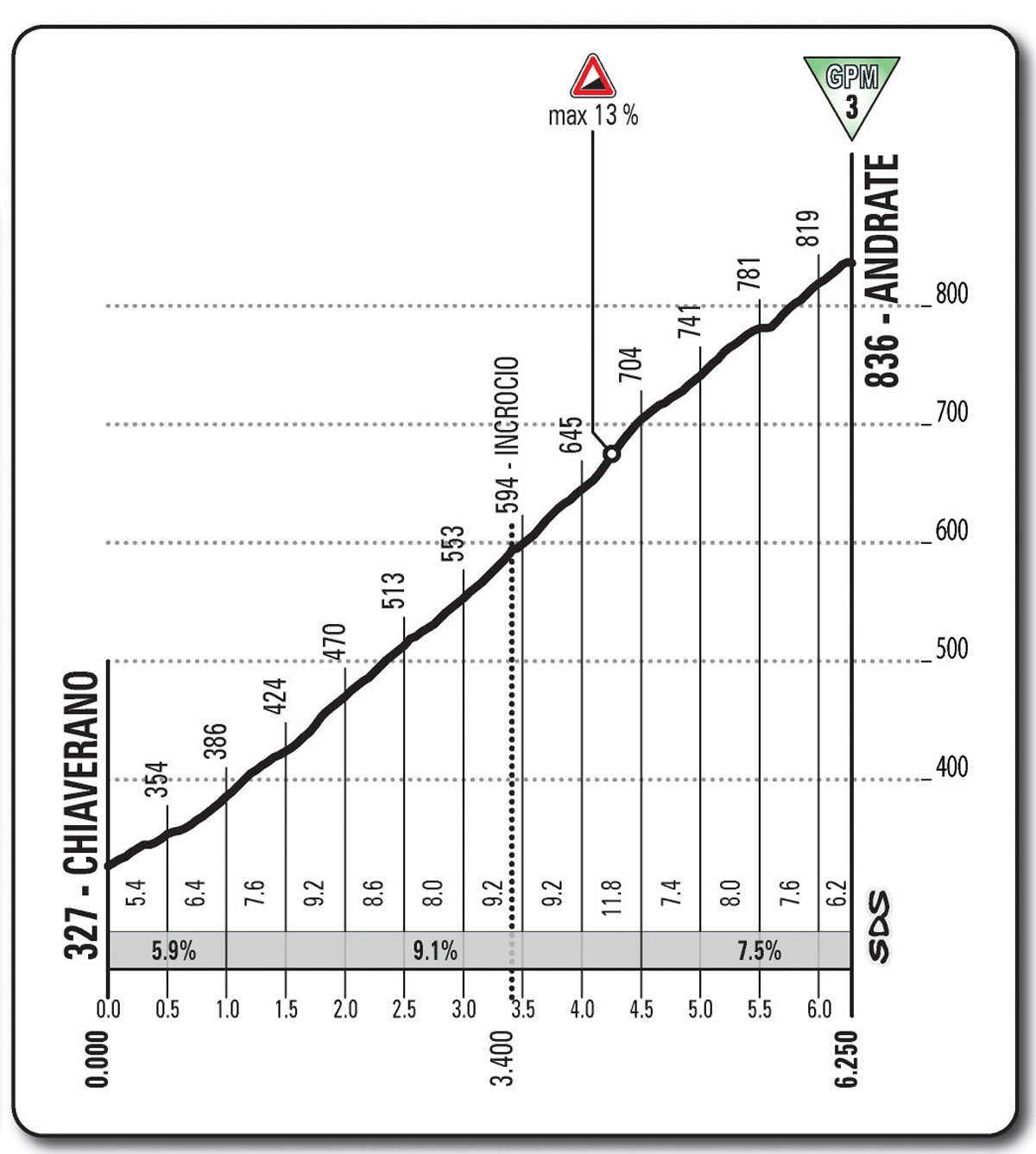 This looks too much for the sprinters. It’s only 6.2km long but steep meaning you can’t sit tight on the wheel of your team. Things start fine with a wide road but halfway up there is a crossroads and the race goes through the junction and tilts up. For a moment the Giro is in the middle of the Belgian Ardennes as it tackles a steep wooded climb on the way up to Andrate. Worse for the sprinters, the descent is no place to chase as it’s winding, sometimes offering stunning views of the mouth of the Aosta valley but riders will be checking their trajectories and speed on the way down.

The Finish: the descent ends with about 8km to go where the race takes a flat road straight into town. A couple of bends and a right-hander just before the flamme rouge then a long and wide finishing straight.

The Scenario: a day for the 55T outer chainring whether down the Télégraphe or the long valley roads. The final climb is too much for some sprinters. Mark Cavendish did well with his team on climb to Tre Cuni and through the Barolo vineyeards to Cherasco but they were just about fast enough to allow a sprinter to tuck in and hang on. By contrast today’s road to Andrate is steep and twisting and if it’s “only” 6km long, the gradient means it will take time to climb. So if I tipped Cavendish for Cherasco, I don’t see him winning here. He’ll still enjoy his birthday on the podium if he can retain his points jersey today.

With this in mind we can work backwards and see the Alpine start of the stage as a launchpad for a breakaway. Some hard riding awaits because the fight to go clear could last some time. Once the move is established it will take energy to keep it going on the long flat roads.

The Andrate climb could be the final springboard for a strongman to storm away because 30 seconds’ lead over the top can be maintained on the descent and then it’s 7km to the finish which means a lone rider can be caught by a chase (and so don’t expect some GC guys to try much because if they do, there’s just time to bring it back). But don’t be surprised if the day’s early breakaway is reeled in by other teams who have lost out and so the Andrate climb is a warzone with riders attacking, a scene similar to the finale of Il Lombardia.

If you want names then Katusha’s Luca Paolini is riding strong and if Danilo Di Luca (Vini Fantini) keeps trying, the terrain does suit him. If some sprinters are dropped and it’s a gallop to the line, perhaps Androni’s Fabio Felline will be there?

TV: the final climb will start around 4.30pm with the finish expected for 5.15pm. Tune to watch the climb and descent select the winner.

Weather: Cool temperatures in the mountains and it’ll warm up for the finish in Ivrea but only to 18°C (64°F). There’s a chance of rain, the probability seems to vary according to different websites, but if the roads get damp the final descent could be awkward.

Typewriters: today’s finish in Ivrea was long the home of Olivetti, the Italian company famous for its typewriters but also the world’s first company to mass-produce a desktop computer in 1965, the Programma 101.

You might think typewriters have vanished since laptops and now tablets are everywhere but one lives on with the sports journalist Gianni Mura who clacks away at his Olivetti Lettera 32.

A regular at the Giro and Tour de France, Mura is currently touring Italy to promote his book Ischia.