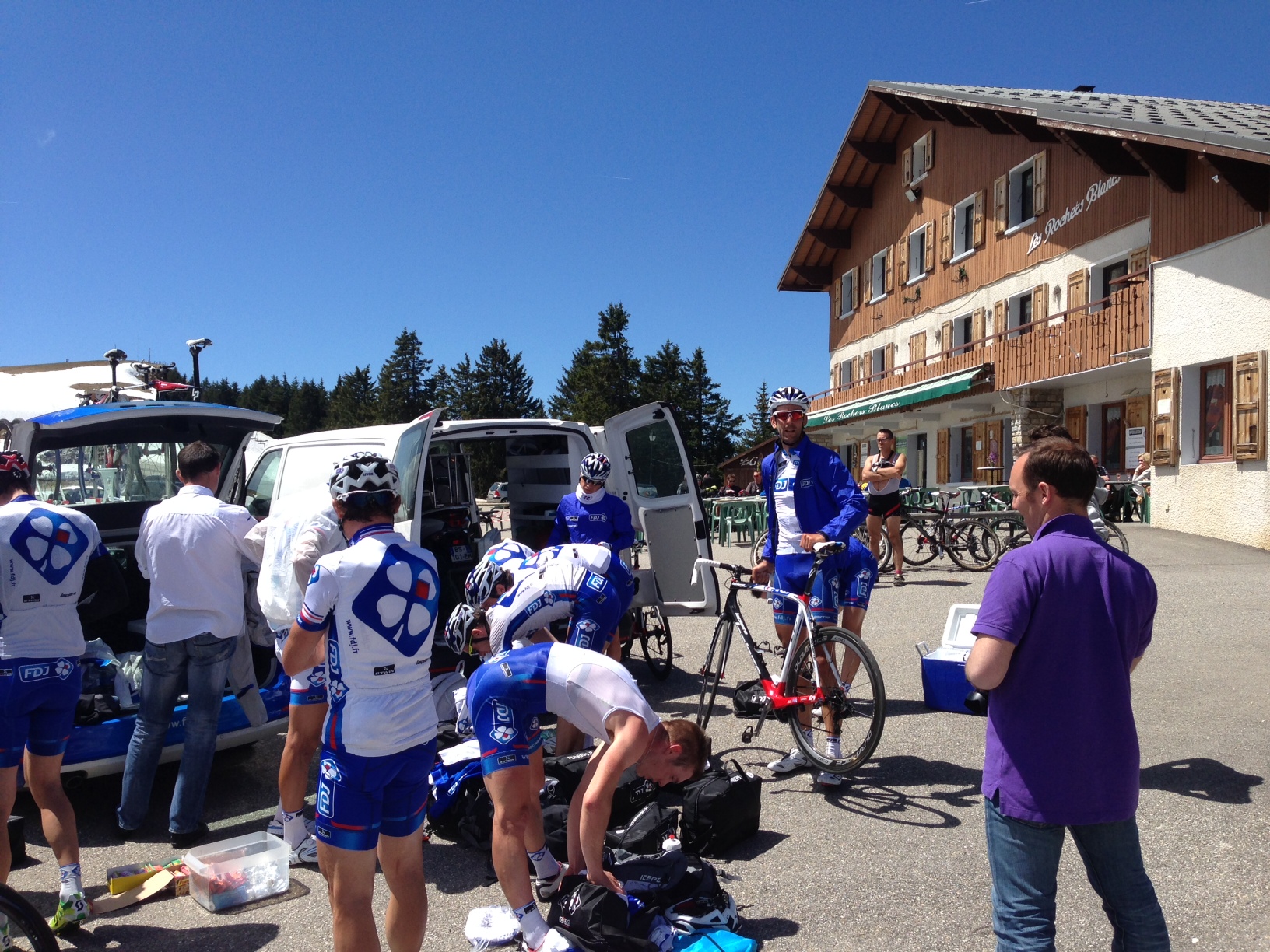 With the Giro rest day in the ski resort of Valloire, a report from Saint-Jean de Maurienne, a town just down in the valley below that was recently host to the FDJ team’s mountain training camp.

After a few days training with Thibaut Pinot and Alex Geniez, Jérémy Roy is joined by many more of his FDJ team mates for a bigger mountain training camp. As he explains it’s easy to avoid seeing many of your team mates during the year and this is a chance to meet up. But it’s not a social occasion, it’s a chance to recce more Tour de France stages, practice team time riding and more, all whilst trying to avoid the threat of rain in the high mountains. 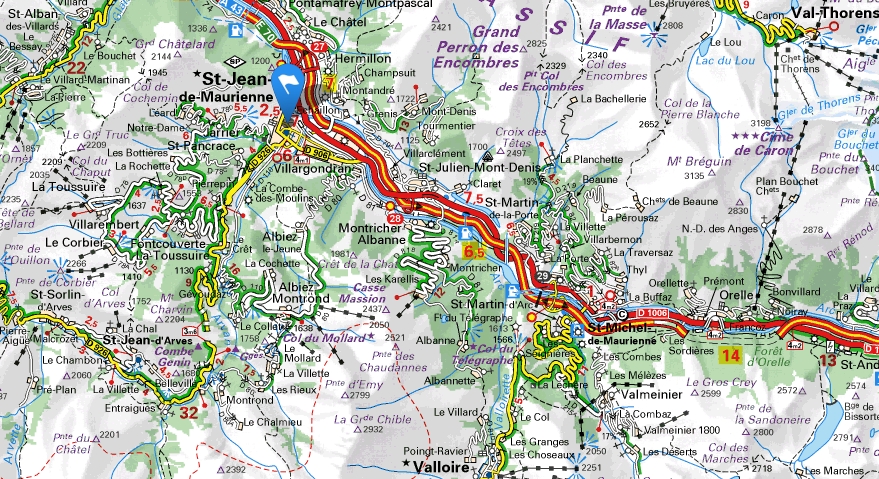 Monday 13 May
7.30am: Wake up and then breakfast with Thibaut Pinot and the chance to talk about the League title won by Paris Saint-Germain, his favourite football club. But we also talk about the Tour of California. A gentle day lies ahead for us.

9.00am: A quick check on the web for local news back home and then I edit the first part of my website diary.

11.00am: A ride with Thibaut Pinot and Alexandre Geniez at a leisurely pace. An hour during which we enjoy the scenery without having to stamp on the pedals. It’s all about easing the legs, avoiding too much load on the muscles. You can’t do too much or you’ll sap the body. It’s essential to recover for the second part of the training camp.

2.00pm: An interview on the roads above Saint-Jean de Maurienne with a film crew from sports channel Canal+ who are here to film Thibaut Pinot.

3.30pm: A workshop to check the calibration of our power meters with our coaches Frédéric Grappe and Julien Pinot (INRNG: Thibaut’s brother). It’s essential so that the data and their analysis is correct. You can see what goes on from this film made earlier in the year.

4.00pm: During a training camp a cyclist is always a bit of a vagrant, a wanderer. A quick trip to the local supermarket for some shower gel, toothpaste and a razor. It’s good to get out of the hotel. More so since the escapade was incognito, nobody recognised us!

5.00pm: Massage and time to read L’Equipe. A tiny little box for cycling on the front page which mentions the difficulties of Bradley Wiggins in the Giro. As the massage ends I tell myself that this quiet day has still managed to fly by. And I learn that the weather is going to get worse.

7.30am: Wake up and then we head to Chambéry to meet up with the rest of the team who got here the day before. Some have come straight from the Tour de Picardie. The only front the team is racing on right now is the Giro.

8.30am: Breakfast with my colleagues who’ve joined us for the second part of this camp. It’s a chance to catch up with everyone, because contrary to what you might think, there are often some team mates you hardly see all year, some perhaps never. We chat about what’s happened since we last met and the group spirit forms. People discuss recent rest periods and we explain what we’ve been doing during the first past of the training camp.

10.00am: We’re off for another heavy day in the mountains. The sun’s shining and you have to make the most of it because the bad weather threatens to ruin the party. On the menu today: the final of the Tour de France stage that finishes on the Semnoz mountain above Annecy, with the Revard mountain added just before (INRNG: the last stage of the Tour in the Alps). Over 200km and seven hours in the saddle. These two cols are very difficult and I’m certain that the overall classification of the Tour could be still be shaken up on this stage. It’s a short distance and therefore it’ll be explosive. Le Semnoz is very hard at the foot. After it gets steady, and the road surface is good. I’d already climbed this mountain when I came to the Annecy region to contribute to a research project for a local business. On the way down the mountain we met a guy on rollerskates doing the descent at full speed: impressive! After the climbs we head over to Saint-Jean-de-Maurienne via the Col du Grand Cucheron, adding up to seven hours of work.

The views from high above the Lac du Bourget:

Descending the Semnoz, camera mounted on the fork!

5.00pm: Shower time! A well-deserved reward after a long day. Then a light snack before resting a little and a massage. Our sponsor Btwin visits us late in the afternoon. The guys have even come with their bikes so they can enjoy the mountains too, nice.

7.00pm: Massage, dinner and then back to our rooms. I’m sharing with Arthur Vichot. The next two days’ weather dominates the conversation.

9.30am: We’re off for a planned five hours. Or that’s the plan because the rain looms. So we don’t stray for from Saint-Jean de Maurienne. At first we do the Col de Chaussy, then the Col de la Madeleine which will be on the Tour de France route. But we U-turn near the top of the col because, as expected, we can’t cross over because of the snow. We ride over to the Col du Mollard before finishing with the climb to La Toussuire. In all, 5h40m on the bike and, miraculously, we escaped the rain!

But we’ve planned for any bad weather. One advantage of riding in the mountains during a team camp is that we’ve always got a following car. It’s a big plus because we can get food and drink when we want, and also warm clothes and rain gear if needed too. But that gear stayed in the car today.

4.00pm: A meal back at the hotel and then a meeting with Btwin who talk about the changes to the team’s clothing and show us prototypes.

6.00pm: A massage then we head for the Saint-Jean-de-Maurienne town hall for a publicity session. Our FDJ team has had a deal for three years with this town for the May training camp so it’s normal we do our bit for our hosts. The town has laid out indoor trainers rigged up to a giant screen which displays a local climb. We hadn’t planned to do another training session!

8.00pm: Dinner. Then off to bed with the fear of bad weather on Thursday because heavy showers are forecast. We’ll ride according to the weather but the plan is morning and afternoon training sessions with some high tempo work, especially on the TT bike, to put some zip into the muscles. 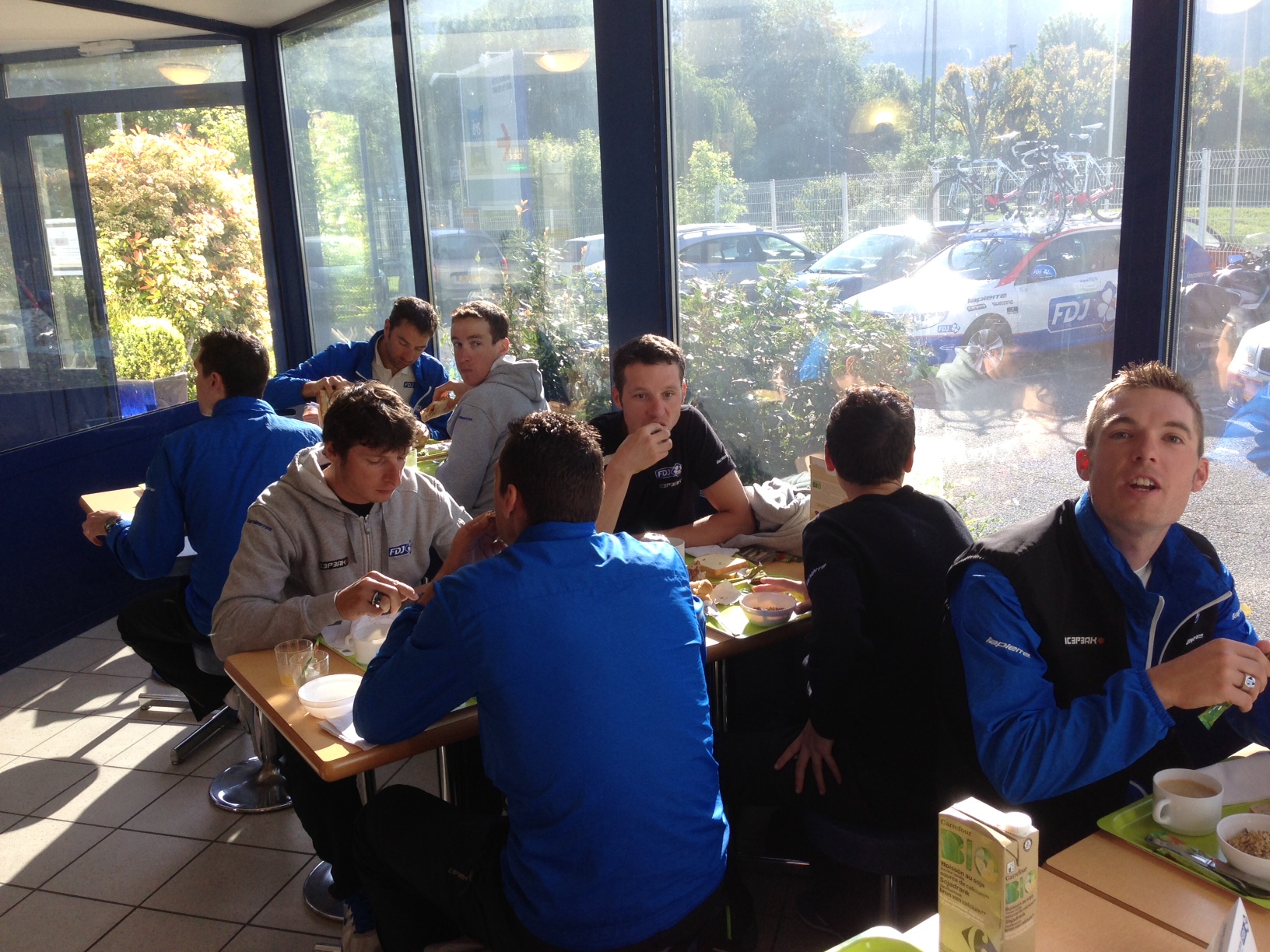 10.00am: We’re off for a group ride on our TT bikes. The goal: to practice team time trial skills in groups of six with three runs of a circuit of 12km. To finish the exercise, the last run is with nine riders, leaving 90 seconds behind a group of three. The plan is to build good habits in this difficult exercise, to approach corners better in a team formation, to take your pull without chopping the pace, to master dropping back along the line of riders all whilst trying to be the most energy-efficient. In all, 100km in 2h30m of which 1h30m in time trial mode. As a result I finish really tired.

A video of the day? No video, the camera fell off as we started. It got picked up by the following car but I didn’t put it back on.

2.30pm: A free ride. We’ve chosen to climb the Mollard again but not at a high pace but a session that’s, in total, 1h30m long. And once again no rain. A lucky week given that on the other side of the border Italy has been hell for the riders in the Giro.

5.00pm: Massage and then a press conference

8.00pm: Dinner. The hotel owner makes us taste his speciality, fondue savoyarde. To be eaten in moderation!

Friday 17 May
9.00am: We go by car to Albertville. An hour later we’re on the bike to recce the final of Stage 19 of the Tour de France which finishes in Grand Bornand. Plenty of indigestion on the menu: Col de Tamié, Col de L’Epine, Col de la Croix-Fry. This will be the stage with the biggest vertical gain of the Tour. These climbs are less well known than others but an easy col doesn’t exist: this will be selective, I’ve no doubt about it. 100km on the bike in total and then we return towards Annecy.

2.00pm: Off to Chambéry to start the journey home and spend a recovery weekend with my family. In eight days I’ve accumulated 950km, 36 hours in the saddle and 22,000 vertical metres. A big block that’s necessary for the big events that are coming.