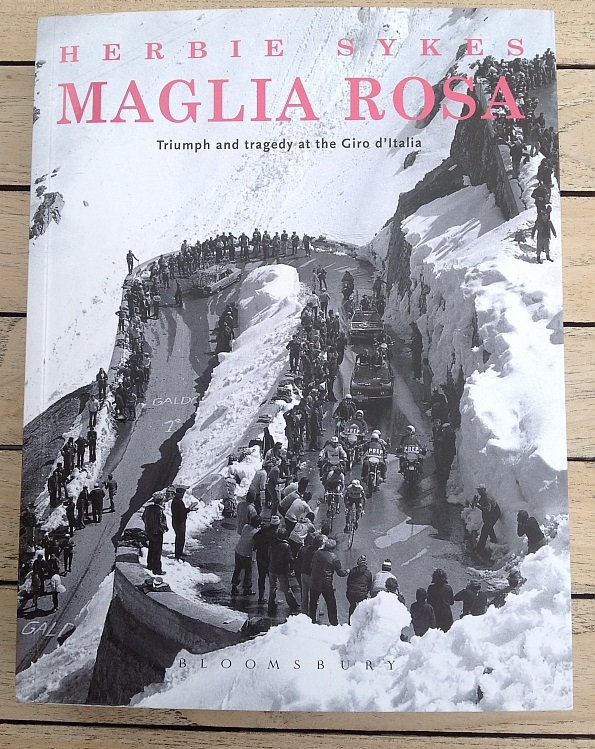 Maglia Rosa, triumph and tragedy at the Giro d’Italia by Herbie Sykes

Another history book? No, this is much more. It’s a collection of stories from the Giro and Italy that goes beyond a sepia-tinged list of past race incidents, names and nostalgia. The second-edition version is also updated with commentary on the sport that looks at how the Giro is trying to find its place in the sport.

It covers history but through stories and people. Sykes has his views and isn’t afraid to share them, for example Alfredo Binda is “the greatest cyclist of all time.” There’s no debate or comparison. It’s different to John Foot’s Pedalare! Pedalare!, a more classical history book that places Italian cycling in a wider context of societal change, first growing and then shrinking in response to the rapid changes in Italy. By contrast Maglia Rosa is still packed with history and context but it is telling stories about the people involved rather than the sweeping trends, the micro rather than the macro. It’s almost conversational in style, as if Sykes was reading aloud to you, for example riders “rock up” to a race and he doesn’t hold back with descriptions of others. 1977 winner Michel Pollentier is “stubby short-arsed” and “little, bald, pasty and monosyllabic” whilst inhabitants of Ivrea – hosts to the Giro today – are “invariably pallid and genetically stooped people.” Marco Pantani is a “dumb big-eared kid.” But this style helps resurrect characters from the past, bringing names and characters to life, colouring the black and white of the past.

The pages are packed with factual nuggets. On one page alone we learn where the word campionissimo came from and that the label “The Eternal Second” might hang on Frenchman Raymond Poulidor but was in fact created long before for Gaetano Belloni in 1919. Elsewhere in 1936 football club Juventus might have won the Serie A title but the news was relegated to page 5 of La Gazzetta Dello Sport because the Giro was on the front page. Unthinkable today?

Sykes takes you to the regions of Italy with Lombardia and Piemonte painted as strongholds of cycling and we learn how the sport spreads to other areas like Toscana over time too. It’s eye for detail that stands out, you get your fix of Coppi or Merckx but there’s a chapter on Orfeo Ponzin too. Who? Well read the book to found out. And when the race visits the (normally) arid south of Italy in 1954 riders raid local bars for drinks. Such scenes have been common but the book goes as far as explaining which drinks were stolen by riders:

“A new American drink, Coca-Cola, was prized above all else. With its high caffeine and sugar content, it quickly became the amber nectar of the professional cyclist.” 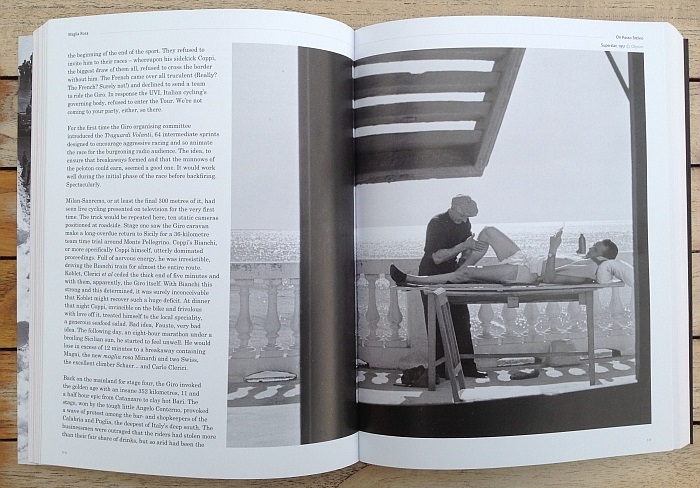 As well as the detail, the photos stand out. It’s published by Rouleur and you get the big pictures that you’d associate with the magazine. If fact you can leaf through the book for the photos alone. On a related point the book is heavy, printed on thick paper.

The further you go through the book the more it changes from history and tales of the past into analysis and comment. This is the second edition of the book and there are extra chapters on the Giro finding its place in the sport and even the world. After receiving this book I flipped through the pages but was quickly caught by this latter analysis. The personal account of experiencing a stage of the Giro during the height of the Pantani mania is notable and the account of interviewing Leonard Piepoli (“I was left feeling like I’d spent two hours inside a Camus novel“) is interesting too. The final two chapters ask what is Italian cycling for and where is it going. I won’t spoil it but it’s interesting to see how the Italian cycling media navigate the route between nostalgia and sport, home interest and the idea of the Giro as an Italian stage for an international race.

What’s not to like? Well it’s missing an index which would be great given all the stories, names and places referenced in the book, you read about them and want to return but can’t look up the page. As mentioned above Sykes’ style is biased and loud at times but that’s part of the charm. For example rather than say just say Michel Pollentier wasn’t an exciting winner he piles on the cruel terms but arguably this only makes you remember the story better.

Summary
All the classic stories of the Giro are there but this isn’t a formulaic catalogue of the past that repeats old myths. There’s a lot of original research behind the writing so even if you liked Pedalare! Pedalare! you’ll enjoy this. The photos bring the past alive but so does Sykes’s style and the final chapters are amongst the most interesting because they turn analytical. The Giro might be on now but this is the kind of book you can dip in and out of to feast on Italian cycling again and again.