A day for the sprinters? Well the more you look, the less likely it seems. The profile shows a mischievous climb 16km from the finish but the secret lies in the narrow roads.

The race visits Vicenza to salute Tulio Campagnolo, the inventor of the quick-release lever and perfecter of the derailleur. Riders today will need to master more than their gear shifting to cope with the final climb.

Yesterday’s Stage:  a day of greed and fear. A large breakaway went away but the presence of Cannondale’s Damiano Caruso meant the likes of Katusha and Radioshack feared for his high overall placing so they contained the move all day. Greedy of Caruso to sit in a break and condemn all the others with his presence? Yes but he had the last laugh when neither Katusha or Radioshack had riders left in the final after working for hours to chase.

With the breakaway reeled in before the finish it left the big names to dispute the finish on a climb that caught out many although loyal readers were well informed.

The obvious loser of the day was Mauro Santambrogio who was invisible in the front group over the climb. Greed too from Astana and Lampre-Merida with Kangert and Niemiec working hard to win a stage but at this stage in the race you fear that’s energy being spent when it could be needed in the high mountains. No greed for Movistar who collect three stage wins, not bad for one of the most modest budgets in the World Tour.

The Route: the stage starts in Caravaggio, home of the famous painter but today’s route is as flat and linear the electro-cardiogram of a corpse rather than any oil painted magic.

But the brush strokes and pedal strokes all change after 170km and the intermediate sprint in Orgiano where in a place called Ponte Alto the road switches to narrow roads, heading into the Colli Berici, the Berici hills. In no time the road is so narrow that if a cyclist and a car met each would have to check their path. 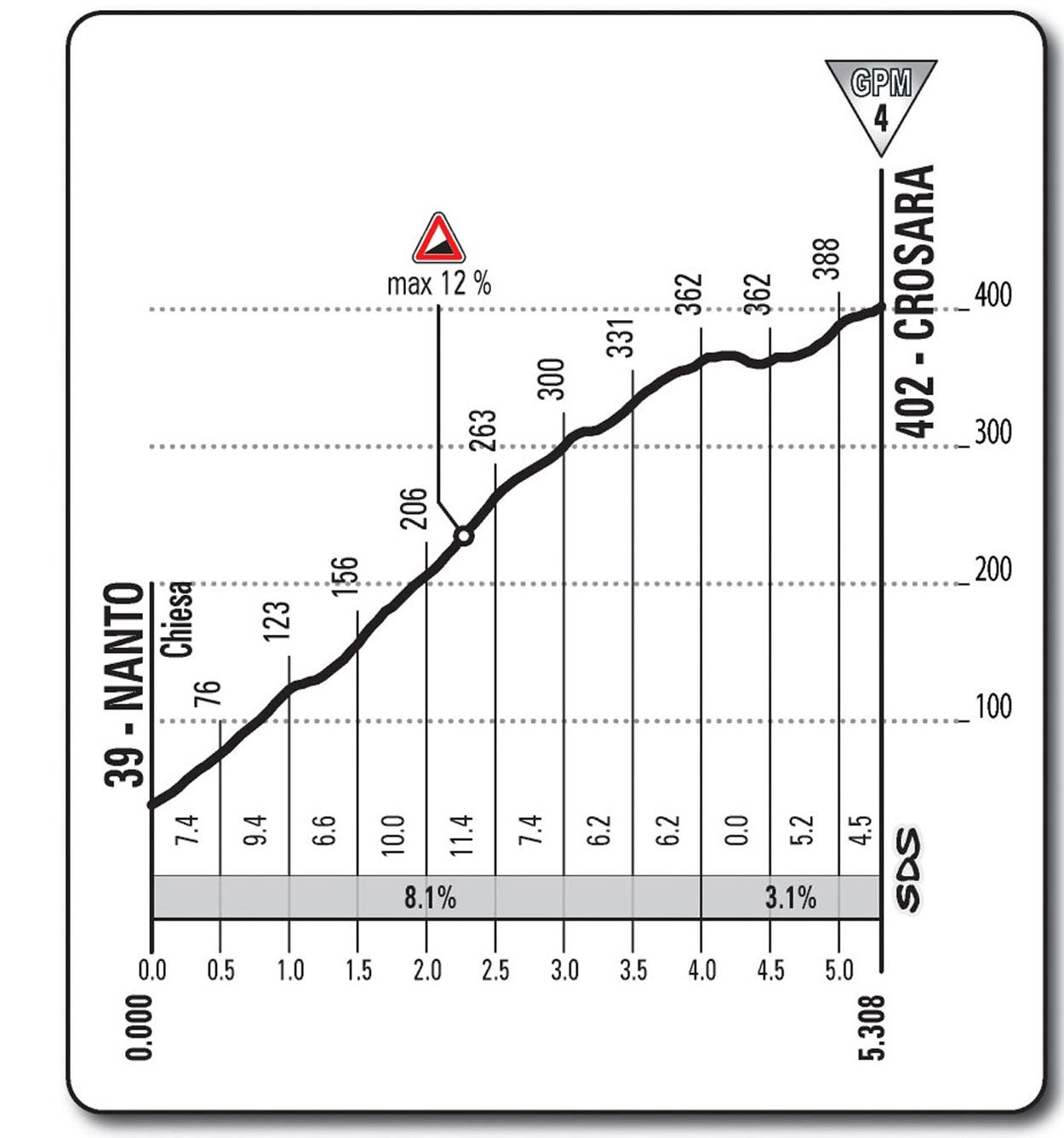 There’s the climb of Crosara, 5.3km and 6.8% average with max at 12%. The point to note here is that you can’t take the climb in isolation. The roads before are narrow and the descent is technical is too. So pacing a sprinter up is no easy task as it’ll be hard to control before and after the climb too.

The Finish: flat but with a few hazards in the way, including a right-hander with 400m to go which sees the wide ride shrink to feed traffic and so the race, into a roundabout. The final road is flat and wide.

The Scenario: some tipped Cavendish yesterday but I couldn’t see it. Glance at this stage and it looks like a sprint finish, albeit with a hill to mix things up. But now I’ve looked in more detail I’m less sure. The climb is so steep and narrow that if the bunch hits it full gas then the sprinters can get flushed out the back of the peloton like a bad case of dysentery. Crucially the twisting roads before the climb allow inventive teams to break the race up although whether OPQS and Cannondale consent is another matter.

Mark Cavendish is riding well and his team is dedicated to helping him and there’s 16km from the Crosara hill  to recover things. So expect to see him lose ground he could come back to contest the win. Perhaps the question is what state his legs will be in if he makes it to the finish?

If not Fabio Felline was the first of the fastmen home yesterday and with Gavazzi eliminated from the race after being caught taking a tow on a car the Androni team has only one sprinter to cater for. Similarly Sacha Modolo was dropped yesterday but didn’t finish too far down yesterday. But there’s a good chance this wild Giro continues and we get a breakaway.

Weather: sunny skies and the thermometer sits above through the 20°C with little wind. A nice day for April and summer still hasn’t arrived at the Giro yet.

TV: tune in from 4.30pm to catch the final section through the Berici hills and the suspense of whether the sprinters can make it over the hills and through the bends to win.

Word of the Day: cambio meaning change. In 1927 Tullio Campagnolo needed to swap his rear wheel from one side to the other to change gears because in those days bikes had one sprocket on each side of the hub. But his hands were frozen and undoing the nuts proved a challenge.

With necessity came invention and the quick release lever was born and the Campagnolo company followed. In time Campagnolo moved to gears. Others had invented different systems but Campagnolo created the Cambio Corsa (“Race Change”), a system with two rods on the rear seat stay used to shift the chain from sprockets on the rear wheel and in time came the Gran Sport groupset. As such Campagnolo was refining and evolving technology elsewhere, a tradition that lives on today with the way the firm from Vicenza brought 10 and 11 speed gearing to the market.

Next post: Who Sets The Rules: MPCC vs UCI?