Who Sets The Rules: MPCC vs UCI?

Who runs cycling? Ag2r La Mondiale will sit out the Critérium du Dauphiné in accordance with the MPCC rules which state a team must stop racing for eight days following two positive anti-doping controls in the past 12 months. But the UCI rules say a team has to ride every race on the World Tour calendar and a substantial six-figure fine could be liable.

But there’s no need for an oppositional tone, the MPCC has proposed ideas which the UCI has readily adopted. Perhaps it’s time to do the same?

MPCC Rules
Following Sylvain Georges’s B-sample confirmation the Mouvement Pour un Cyclisme Crédible (MPCC) rules say a member team must suspend itself from racing for eight days following the start of the next World Tour race, which is the Dauphiné starting on Sunday 2 June.

The important phrase here is “unjustifiable absence”. Is it justified to miss the Dauphiné because of the MPCC rules? Ag2r will hope so because 10,000 Swiss Francs a day means over €60,000 to pay for missing the Dauphiné alone.

It’s also a headache for ASO who were planning on hosting a team and will have booked hotels only to find the field is smaller. But Christian Prudhomme is a big supporter of the MPCC so they’ll shoulder the loss. 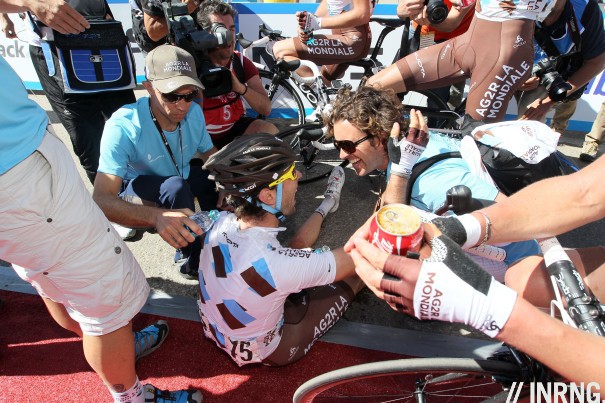 Sylvain Georges: from hero to zero

Opposition
We can see the UCI rules say one thing and the MPCC rules say another. We’ll see what stance the UCI takes on this, is it “justified” to sit out the race? Now if you agree with the MPCC principles you might say yes. But from the UCI perspective, it is supposed to set the rules of the sport and doesn’t take kindly to others trying to chip away at its power, see the spats with WADA or ASO in recent years. Seeing a third party like the MPCC create its own rules on when teams can race means part of the sport’s anti-doping effort is taken away from the UCI.

A Solution?
One idea for the UCI would be to adopt the MPCC rules. It’s not the first time. The UCI has a “no-needles” policy of banning the use of all injections and infusions unless for serious medical need, in other words no vitamins or recovery products via a syringe or drip. This was an idea first put forward by the MPCC and has since been adopted in full by the UCI and now other sports are copying too. So the UCI could adopt the suspension principle too.

But it’s here things get tricky. Punishing the team for the actions of one or two riders is a collective punishment. Whilst Ag2r whip themselves in penitence for eight days for the sake of the sport wholly innocent riders are forced to sit out important races. Some lose the chance to win vital points, others can’t get racing in their legs needed before the Tour de France. And it’s not as if the team can just switch riders to the Tour de Suisse because riders have to be a long list of entrants for the race and if they’re not on this, they’re not able to ride. So the suspension is outside of the normal sporting rules, in excess of the WADA Code and can probably only work if it is voluntary.

The 8 Day Mystery
The MPCC rules also say a team is suspended from racing for eight days with the clock starting on the first day of the next World Tour race. So this means eight days from the start of the Dauphiné on Sunday 2 June. Only the Tour de Suisse starts on Saturday 8 June but Ag2r plans to ride this race.

The MPCC rules aren’t precisely worded. Maybe it’s not calendar days but race days? For example Ag2r could be saying they sit out eight race days because the Dauphiné is eight days long. But this could cause a lot of trouble if another team is caught, say on the even of the Paris-Roubaix and therefore has to sit out eight days of World Tour racing which could stretch to beyond the Tour de Romandie.

Conclusion
Well done to Ag2r for agreeing to uphold the rules it signed up to. This act creates a precedent that others might have to follow. The MPCC’s own rules probably need a redraft so we clear up the uncertainty over the eight day idea.

The MPCC isn’t some external governing body, in fact it’s really a group of teams. It’ll be interesting to see how the UCI reacts to Ag2r’s self-suspension. Is it happy for teams to agree anti-doping rules or will it be frustrated by this code over which it has no control?

The answer is we’ll have to see although given the UCI has read the rules and not made any move to stop things we can probably asssume tacit approval. But if approval is one thing, adoption is another. Because of the way the MPCC rules punish the whole team I can’t see the UCI moving to incorporate the MPCC’s code into its own rulebook because it could fall down if challenged by the CAS.