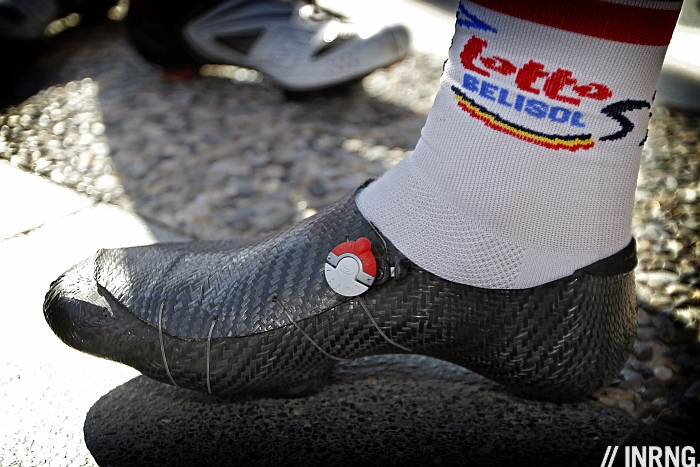 André Greipel’s won two stages of the Tour of Turkey so far and there’s an interesting story behind current race leader Natnael Berhane of Eritrea. But the race isn’t over. One curiosity from the race so far has been Adam Hansen’s custom shoes. Now prototype gear gets tested in races but the difference here is that the Lotto-Belisol rider is making his own shoes.

In a way this is pure Hansen. He moved to narrow handlebars in 2010 and has now encouraged others in his time to copy. Greipel is on 40cm width bars. A computer programmer by background Hansen told RIDE Magazine (Issue 59) that he speaks five languages “PHP, MySQL, ASP, VB, Java” and has designed logistics software for his team which he hopes to sell to others.

Riders often have sponsorship contracts for items outside of the team-issue kit meaning many are free to choose sunglasses and shoe sponsors. Hansen could have posed for a “I chose [insert shoe brand]” ad and got a few thousand Euros and several pairs of shoes but instead he’s opted for what looks like a pack of carbon fiber pre-preg, some fishing line and a ratchet dial from an old Sidi shoe. It all makes sense, after all the shoe is really just the means to hold the foot to the pedal and moulding the carbon to suit your foot shape can be done at home. Do it right and you can get custom shoes and save on weight.

Electronic Gearing, Electronic News?
One innovation that might be less successful is electronic gearing. Within the space of a few days we’ve seen several high profile failures of electronic gears. Last week brought us Bradley Wiggins hurling his bike away only for it to come to an elegant stop against a wall. If the Giro fails he can always target the pétanque world championships. His bike throw only happened after problem with his gearing. On Sunday we saw Alejandro Valverde complain he couldn’t contest the final of Liège-Bastogne-Liège because of a problem with the gear shifters. And two days ago Bryan Coquard was ruled out of the sprint in the opening stage of the Tour of Turkey because of the same problems.

But mechanicals have always been a problem in the sport. Punctures are common, the same for breakages after a crash. So are reports of problems with the electrical gears down to the electronics? Or the rapidity and volume of electronic news where component failures can be quickly relayed? After all the story was Wiggins’s electric gears failed but nobody mentioned Nibali’s bike worked.

No Wildcards
The Tour de France starts in just over two months’ time. We know the 19 World Tour teams who get an automatic invite but Tour company ASO can still choose three more. Only they’ve yet to announce the invites. Normally you’d think Europcar are certain and then Cofidis and Sojasun get the nod. But it’s said ASO is looking wider and hesitating about who to invite.

What is certain is that the delay doesn’t help anyone. Teams that could get an invite need to be preparing race schedules and training plans and uncertainty over what they’ll be riding in July is a big deal. For example should a team count on riding in July or should it instead aim to peak in June for, say, the Dauphiné or Tour de Suisse? Time is running out.

Tour TV
One area where people can plan for the Tour de France is the TV production since France Télévisions have bought the rights to the Tour until 2020 along with a range of other sporting events. This matters wherever you’ll be watching the Tour because the French TV will produce the images. The production quality is excellent, in part thanks to diligent planning.

Giro Boss in Paris
Finally talking of grand tours and TV, one tweet from Giro boss Michele Acquarone. He’s snapped the French capital on his smartphone and added a word of appreciation. You can spot the Eiffel Tower.

But where exactly was the image taken? From the offices of TV company TF1 which owns Eurosport. Talking to TV channels is part of the job but we’ll see if the Giro has new plans for TV in 2014 and beyond.