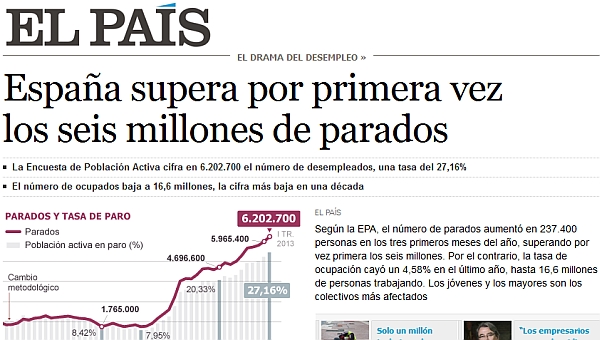 As the screengrab above shows Spain’s unemployment level has reached to a record high of more than six million people, a rate of 27%. Cross the Pyrenees and the story is the same as France’s unemployment has just hit a record high too.  Over the Alps and Italians are trying to form a government after months of institutional crisis, the Swiss are bringing in measures to curb immigration from out-of-work migrants in Europe and the continent’s shared currency is causing headaches from Cyprus to Slovenia and beyond.

Pro cycling does not exist in a bubble and Europe’s economic woes are causing real problems for the sport, from obvious concerns like the lack of sponsors but also creating longer-term structural challenges.

Teams
First let’s look at the pro teams in the World Tour. Of the 19 teams, several have sugardaddy type sponsors, whether wealthy individuals or oligarch/state interests rather than pure commercial sponsors. There’s nothing wrong with this but it does hint at the lack of commercial interest. Astana, BMC Racing Team, Orica-Greenedge, Blanco Pro Cycling, Team Katusha, RadioShack-Leopard, Team Saxo Bank-Tinkoff Bank are in this club and if you wanted to be picky, you could add Omega Pharma-Quick Step with billionaire owner Zdenek Bakala and Team Sky with James Murdoch as these two squads have commercial sponsoring but there’s still an individual who is a driving force behind the team, plus the generosity of Doug Ellis has get Garmin-Sharp on the road too. Cut and count it the way you want but several teams are reliant on wealthy individuals or politicians with their hands on the state’s purse for funding.

Looking ahead Blanco is searching for a sponsor, Vacansoleil is reviewing weather to stay in the sport and Radioshack is pulling out. Hopefully there’s good news for all these teams but the future is uncertain. These problems are, for want of a better word, cyclical. In other words sponsors can come and go with the state of the economy, marketing budgets grow when consumer activity is buoyant. But there are structural problems here too, for starters the spectre of doping scares some corporate backers but the complicated team licensing process deters others. As readers of my column in 2r Magazine might know, sponsors want to know the entry price to ride the Tour de France and the UCI’s World Tour licencing process is a moving target process.

Vanishing Races
Another problem is the shrinking programme of races. I’ve lost count of the number of times I’ve had to edit the calendar for 2013, whether it’s shrinking stages races in Spain which get their duration cut, or worse, pressing the “delete event” button for an Italian race. Again there are cyclical problems, when times are tight then sponsors are harder to find. But there’s an asymmetry here because once the economy recovers the races often don’t. Over the years many events have vanished, never to return.

There are other headwinds. If corporate sponsors have less money then the same is true of governments where belts are being tightened. Many smaller races rely on local funding and have been seen as a promotional tool for a region or a town. But when faced with decisions on what spending to cut, sporting and cultural events are relatively easy to chop compared to, say, closing a local school. This shortage of funding is probably the most regular explanation for the vanishing number of races in Italy.

Another factor is tax, the scramble to patch budget deficits has meant a lot untaxed areas have now become taxed. In Italy this means fuel taxes have risen substantially – it’s hard to evade paying or get creative the pump – and it’s another big cost for the sport. Similarly tighter controls in Spain are seeing races subject to closer financial scrutiny and this means having to pay taxes on their activities, the informal practices of the past aren’t as easy. 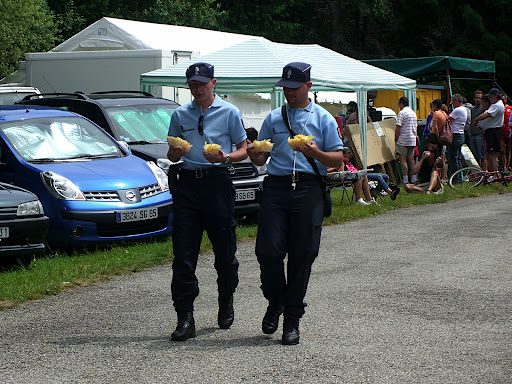 As cheap as chips

Cutbacks are felt elsewhere too, for example French races had enjoyed police protection charged at the hourly tariff due of €2.40. There were plans to raise this to €14 an hour to reflect the “real” cost. But this would have meant an increase in the police costs of €80,000 for a race like the Tour du Limousin and even ASO was worried, with Jean-François Pescheux saying “The Tour will be ok but what will happen to other races like Paris-Nice?” But successful lobbying by the French Cycling Federation and the Ligue Natio­nale de Cyclisme, a pro cycling group managed to limit the rise.

Is there any good news?
It’s important to note that the shrinking economies in Europe are still wealthy. For all the bad news there’s still a strong calendar of events, indeed a management consultant tasked with assessing the sport might even say there are too many clashing events.

Besides not everything is faring badly in Europe, Poland has escaped the recession and data out this morning showed the UK economy is growing, just and Londoners get a new event this summer on the same course as the Olympic road race last July. Norway gets two new races. And if the Spanish unemployment numbers shock, note a share of those unemployed might be working informally so the headline number can be scarier than the reality on the ground.

There are also means to help races. The UCI has a reserve fund and much of this money has been used to launch the Tour of Beijing but in 2010 €30,000 was allocated to the GP de Plouay. There were no outlays in 2011 but I gather funding went to the Tour of the Basque Country for 2012. So there’s money available if needed to keep events going, as long as they can present a viable plan.

Well we could look beyond Europe for good news but it’s not so obvious. The UCI’s forays into China have come unstuck with the Tour of Hangzhou backfiring. The Russians are not happy with the governing body either, plans to turn the GP of Sochi into something bigger have cooled because of the dispute over the Katusha team.

But there are more races. Viewers of Eurosport will have noticed the Tour of Azerbaijan adverts with the “moving ahead” slogan and this race is building. Literally since the course will track the route of a crucial oil pipeline across the country. Much of the funding behind the race is coming from petrodollars. So where there’s new money there’s new racing, just look at the new events that have appeared in the Middle-East.

Silver lining?
Amidst the slowdown what if more people are discovering the bicycle as a means of transport? The sport’s history and heritage is full of riders who started their career on the simplest of bicycles, riding to the field, mine or factory. Times have changed but maybe increased use of bicycles will encourage more to take up the sport? That said reports from several countries show falling sales but perhaps this does not equate to falling usage?

Similarly amongst the high levels of unemployment there must be a big cohort of cyclists who now, unwillingly I stress, have more time for the sport. Assuming they can find funding to travel to races perhaps there’s a generation who will emerge at the top. In other words Spain and other countries with high unemployment might find riders excelling who would otherwise have gone into normal work in an office or construction site.

Conclusion
A lack of sponsors? Races dropping of the calendar? It’s to be expected given the broader economic problems seen in many countries where pro cycling is prevalent. Often doping gets the blame but the slump is bound to be a factor too. But if the economy picks up the sport might be different. Lost races won’t return and local subsidies might not ever flow again with such ease.

To end on a better note, cycling’s a great way to get away from it all. Yes sport could be a modern version Marx’s “opiate of the people” and when the Giro starts we should get three weeks of entertainment. But sport need not only be a distraction, it is a big creator of jobs from teams to bike shops and beyond.