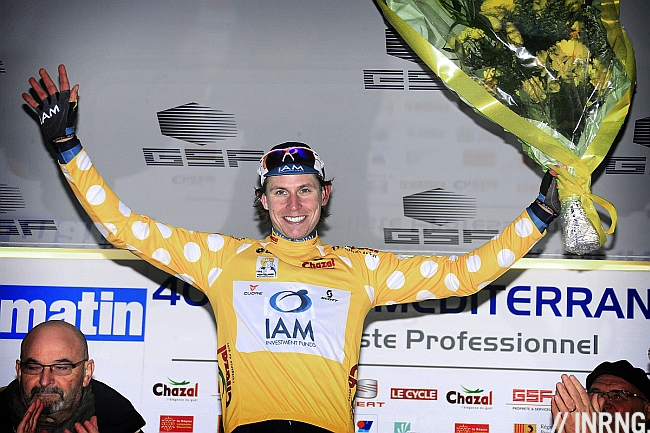 Thomas Lövkvist has won the Tour Méditerranéen on the last stage. Overnight race leader Maxime Montfort of Radioshack lost out as the bunch split on the way to the finish line in Grasse, a town famous for its perfumes and spread on the flanks of hill. It’ll hurt Monfort more as he lives in the area and knows the roads well. Jurgen Roelandts won the stage and he too is a prospect, more than a just wagon in the Greipel sprint train.

But well done to Lövkvist for his first win since 2009. He’d spent three years at Sky but without a single win, a surprise given he was a versatile talent at HTC-Colombia. He’s in his tenth year as a pro but still only 28 and gives new Swiss squad IAM Cycling their first win of the year. Here’s the video, via Twitter’s CyclingFlash:

Faron Agony
They came in one by one on Mont Faron. The cyclingnews.com photo gallery shows riders in agony, grimacing and gasping for air.

Professor Péraud
Jean-Christophe Péraud took the first win of his pro career on Mont Faron on Saturday aged 35. He’s come close to winning before, for example last summer when David Millar outsprinted him in Annonay for a stage of the Tour de France. He only turned pro in 2010 although in 2009 he won the French national time trial championships beating Sylvain Chavanel, the first time an amateur did this. But the gap between amateur and pro is varied, Péraud had won silver in the 2008 Beijing Olympics in the mountain bike race. He’d been working as an engineer with Areva, a French nuclear energy company. If Laurent Fignon was nicknamed le professeur because he wore glasses, Péraud is surely the peloton’s most academic rider with more diplomas and degrees than fellow engineers Jérémy Roy and Marco Pinotti combined.

Péraud went full time in 2010 where he had a good start to the season with seventh in Paris-Nice and fourth in the Tour of the Basque Country but crashed in the Dauphiné. He lost a lot of skin in the incident but got septicemia which ruined the rest of the year. Come 2011 and he finished second on Mont Faron, only overhauled by David Moncoutié and then later finished ninth in the Tour de France. Ninth in his first attempt. No surprise he won yesterday.

No TV
Just as they ask “if tree falls in a forest and no one is around to hear it, does it make a sound?” we’ve had a great race in stunning scenery but there’s no sound and no vision for the Tour Med. This is a great race that’s made for TV as the bunch blows apart on Mont Faron. I know it’s costly but a day’s TV production can be done for €50,000 and what if you charged people for this? Would you pay €10 to watch the coverage all week?

Ruta Del Sol
It’s not hypothetical. They’re trying to raise €12,000 to keep the race going but with five days to go the online counter shows they’ve netted just €254. It was worth a try but I think other means will raise tickets like selling VIP tickets with a meal then a grandstand seat and a chance to meet the podium finishers. Above all beyond Spain there has to be an appetite for cycling fans to buy content. Just as people pay $10 to watch a film on NetFlix, perhaps they’d pay $250 to have a season of high quality video streams? 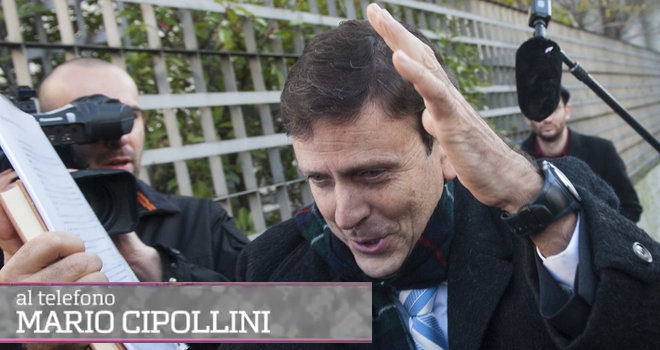 Wounded Lion King
One thing still making money is a doping scandal, it’s been front page news in La Gazzetta Dello Sport this weekend. This time Mario Cipollini’s getting the scandal treatment. He’d been linked before and other tales link him to Dr Ferrari. He denies it all. Frankly there’s no surprise that a winning rider from 15 years ago was doping given doping has been endemic to the pro peloton. But he’s not being helped by a comedy lawyer who’s trying to defend his client partly on the basis that Cipollini would not have picked “Maria” or “Pavarotti” as code names. Other names have been caught but Cipollini is different in that he’s kept a high profile since retirement, his image matters for his business and media profile.

MIA-chele Scarponi
One rider keeping the lowest profile is Michele Scarponi. The 2011 Giro winner should be a big asset to Lampre-Merida only he’s been absent from the last two team photo shoots. The Italian team have just had another promo photo session in Mallorca for Merida and Scarponi wasn’t there.

Maybe it’s all a bit like Paul McCartney’s disappearance when his absence from The Beatles led people to ask what had happened and look for clues, like his barefoot crossing of Abbey Road was taken by over-excited fans as a sinister clue. Still Scarponi has vanished from pro cycling. Did you know Scarponi means “boots in Italian” and the Russian for this is ботинки?

Mano a Mano in Oman
I’m planning a full preview for the Tour of Oman but just a reminder this race is quite different from the Tour of Qatar as it’s got giant mountains and roadside spectators. It promises a mix of sprints as well as a variety of uphill finishes including the Jebel Al Akhdar or Green Mountain where last year riders were some collapsing after the finish line. We’ll see Bradley Wiggins, Chris Froome, Alberto Contador, Vincenzo Nibali, Cadel Evans and others tested here.