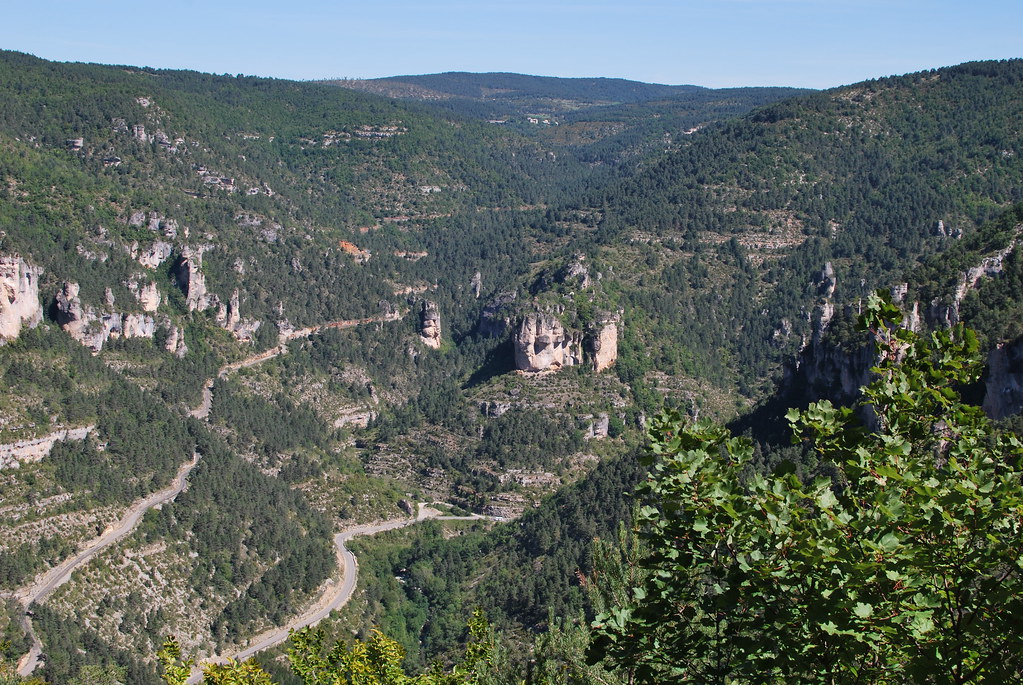 As the seventh part of a series to explore the famous roads of cycling, here is the Mont Aigoual in the French Cevennes. The idea is to discover the road and its place in the world, whether as part of cycling’s history or to look at the route on a day without racing and it is open to all.

Some climbs find notoriety because of famous races but Mont Aigoual is quite different. This is a climb that has been ridden in the imagination and literature more than competition because it’s the scene for The Rider, Tim Krabbé cycle-race novel.

The Route
There are four routes to the top but your correspondent has only done two. Either way the story is the same.

Take the D996 to climb out of Meyrueis up to the Col du Perjuret. Here turn right to take the D18 to the top of the mountain. In total the climb is 26km long at an average of 3.3% although the climbing is steeper because there are some descents on the climb too. The top is 1567 metres above sea level.

The ascension involves several cols, first the 11km long Col du Perjuret, then up before down a long road in to Cabrillac before up again to pass the Col du Prat Peyrot. This marks the top in race but you can ride to the summit and the fortress-like weather observatory.

The Feel
It’s picture-postcard scenery as you climb out of Meyrueis with its stone bridge and clocktower. Cropped plane trees line the route. Leaving town there are two signs to indicate if the cols are open. It’s true there is snow in winter but you’re not in the Alps and the roads are open almost all year – you could ride up today for example. Still they’re the first clue that you’re heading up and the warning signs only add to the adventure. The road then winds up to the Col de Perjuret where you turn right.

France doesn’t have wilderness like Canada or Russia and besides and road cycling means you stick to civilization with tarmac and road signs. But still there’s a sense of isolation and loneliness as you climb up, if only in social and economic conditions. Who lives here, how do they live here?

It’s big ring territory to Cabrillac, the only village on the way. More a collection of farm buildings by now you’ve done the Col des Fourques and the road climbs properly up to the Aigoual now. It’s sheltered by the trees meaning it’s not so scenic. The road is cut into the hill but this could be anywhere. A regular gradient, this is hard work and would make a good place to test your power only it’s in the middle of nowhere. You reach the false col sign the Plo du Four that the mountainous aspect is more apparent. The slope is never steep but the length gets you. Finally you get to the top, there’s no pointy peak, more a gentle dome and the vegetation shows small pines, bonsai sculpted by the wind.

The Book
Tim Krabbé’s De Renner, or The Rider, has to be the best cycling-related novel out there. A niche category but the book is an excellent semi-autobiographical account of Krabbé’s time as a racer in the region and his experience in the Tour de Mont Aigoual. 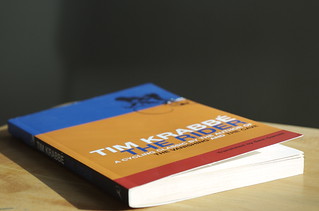 A bike race is so long that the mind wanders. Maybe first you look at the rear hub of the rider in front but in time other thoughts appear. Krabbé writes “people are made up of two parts: a mind and a body. Of the two the mind is of course the rider” and this describes the book. There’s little to describe the effort, no beating hearts or lactic acid, just the wandering mind that thinks of the race but slips to recall other moments.

If this is an exploration of Krabbé’s mind it’s also a celebration of these rural roads. The landscape doesn’t get much praise but you can guess from the twisting gorges as Despuech heads out of sight or feel the cold rain on top of the mountain. Without knowing it you too have ridden here. 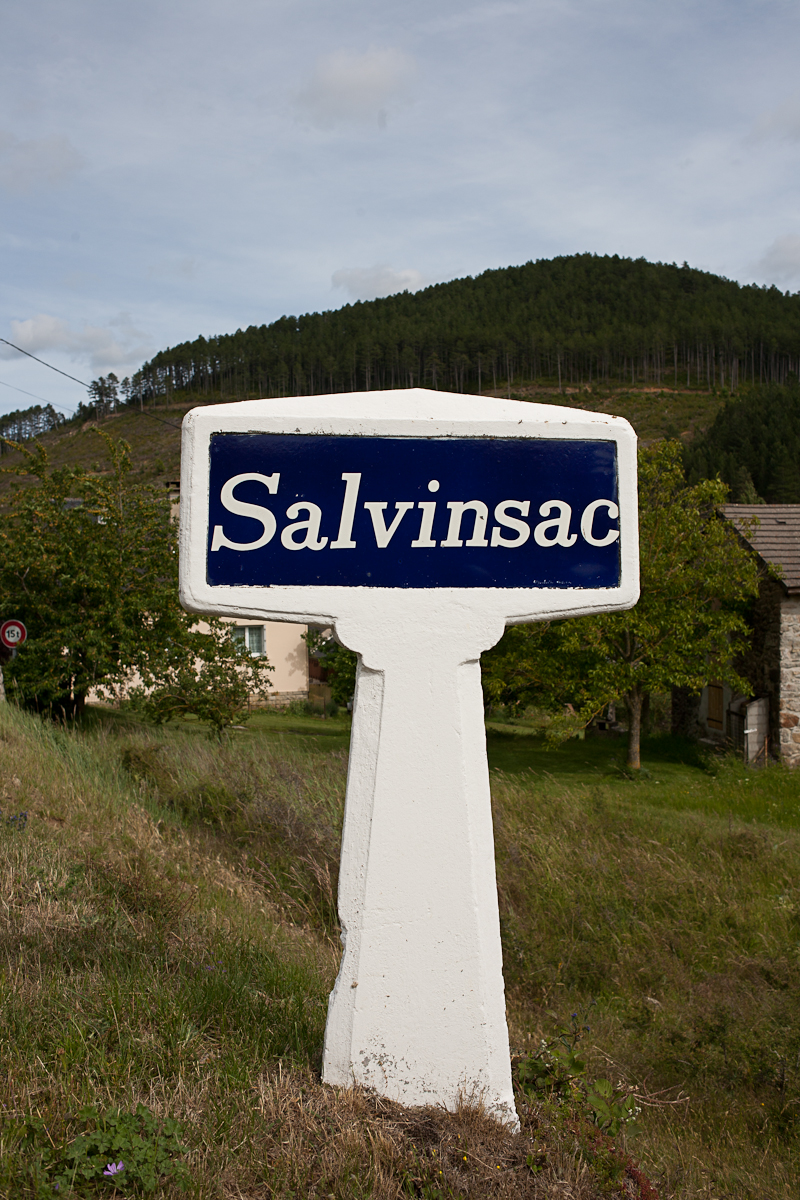 Krabbé: “Salvensac, filthy wine in a sack. An old man once lived here who mashed his grapes with dirty feet.”

The Tour du Mont Aigoual goes down the route described earlier but Krabbé captures the scenery well. Lonely spectators appear and the peloton winds its way along narrow river gorges. Dutch enthusiasts enjoyed the book and made the trip to France to ride the route for themselves. I imagine they had a great time because the roads are stunning and Krabbé carefully picked places and names along the way, the kind of observations that you can remember. The Rapha people went there and spoke to Krabbé about it too.

The Tour de France
The race has only crossed one when Silvano Contini was first over the top in 1987. It was during a stage from Millau to Avignon, 239km long and over six hours. Despite the climb it ended in a bunch sprint won by Jean-Paul Van Poppel, today a manager at Vacansoleil-DCM. Contini’s not a big name but still he won Liège-Bastogne-Liège in 1982 and the now defunct GP du Midi Libre, a tough week-long stage race in the south of France.

On a normal day
The Tour might have visited but this is not an area to race in because the scenery is so rewarding and the roads are there for the cyclist to enjoy. The climb to Mont Aigoual does allow people to drive to the other side but like, Mont Ventoux, most people drive around rather than over. This means a network of wide roads for the cyclist with little traffic.

One a year sheep are herded up the roads to graze on the higher pastures. The annual transhumance is a big deal as it marks the turning weather. The animals are decorated and there’s a carnival atmosphere, albeit on a village scale.

The region has three types of road. There are those cut on the side of a canyon that follow the course of a fast-flowing river. Next, some roads wind up the site of these steep valleys and the third are those that cross the high causses plateaux. You get all three on the way up the Aigoual.

The top is not a hospitable place. On a good day it’s said you can see the Mediterranean sea and the Alps as well as Mont Ventoux. Only these good days are rare as the top is fogged by cloud cover for over 250 days of the year and gale-force winds are recorded even more often. Pack a jacket for the descent.

Aigu in French means “acute”, “sharp” or “pointy” but some say Aigoual comes from the latin acqua meaning water because it rains at the top. Others say it’s from an old Germanic term meaning “governing the land.”

Access
Meyrueis is the town at the foot of Mont Aigoual, a scenic place in the Jonte gorge. It’s just 40km east of the large town of Millau but an hour’s drive on a winding road up a canyon and decades away in the way of living. It sits at the junction of several roads allowing a choice of rides to all the points on the compass. It’s not a big place and night life is going to be limited but there are other tourist activities like a nearby vulture park – do they feed on cyclists who overshoot the narrow roads? – and white water rafting.